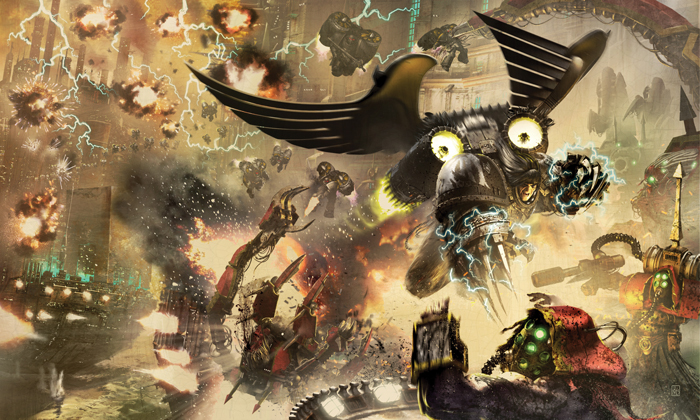 All the Legions have their own unique mechanic. For Raven Guard, it’s Sentencing. When you inflict Sentenced (X) on an enemy (usually for a turn), they take X damage every time they, ugh, take damage. So this is a combo mechanic that requires some finesse to activate, but when it gets rolling, it gets rolling.

Some units inflict Sentenced upon attack, others have it as power – or permanently on, all the damn time – and, of course, there are tactics cards for that, too. Other units have abilities that work on Sentenced units or even increase in efficiency when you attack some dirty, dirty traitor that was branded as such by the Emo Sons Of Corrax.

By the way, teeny-teeny sneak update today also made these X effects show a number value on the card. Now you can track just how Sentenced your units are or which Sallamander survivors will be susceptible to all those sexy “deal 1 damage” powers.

But Raven Guard are about more than passing down judgement – otherwise, they’d just be less edgy Nightlords. Naw, Raven Guard is so full of Stealth and Stealth shenanigans that you’d be excused to think it’s their special mechanic. Finally, all the other decks will have reason to use to crappy lil’ units that strip Stealth away on rally! Iron Hand players are busy stuffing Bionic Eyes into their decks right now!

Of course, the sneaky train does not quietly stop there. Raven Guard have the only Flank outside IH that I know of. You know what comboes well with that? Sneak Attack. While it’s not as plentiful as Stealth (seriously, guys, so much Stealth), it still appears on more than a few units, including a card of Flanking dickb- jetbikes. BUT THAT’S NOT ALL! The most jetpack of Legions also contains plenty of Unstoppable. Eat your heart out, First Wave!

What are the downsides of Raven Guard? Well, as a pure deck, it won’t have any Front Line until you put 7-energy Deliverers on the field. And they only Line-up if you have no other troops. The only actual Front Line troop is a 10-energy Spartan. It’s beefy, but expensive, susceptible to much cheaper Outflank, the always annoying Perfection’s Flight, any Sacrifice troops that kill ran enemy on death, as well as Melta Bombs. On the other hand, that Spartan farts out Deliverers at 3 energy a pop, sooo…

Also, while the deck is great at comboing stuff dead, it’s kinda lacking in Fuck You Tactics like the aforementioned Outflank or everyone’s favorite/objectively best card, Defense Satellites. Best hope your sneaky beaky infantry can see you through!

Raven Guard are a lot more difficult to play than such straightforward Legions like World Eaters or Sons of Horus. But when the cards are right, you will be pulling combos that will whisk the phone away from your opponent’s hands and into a wall.