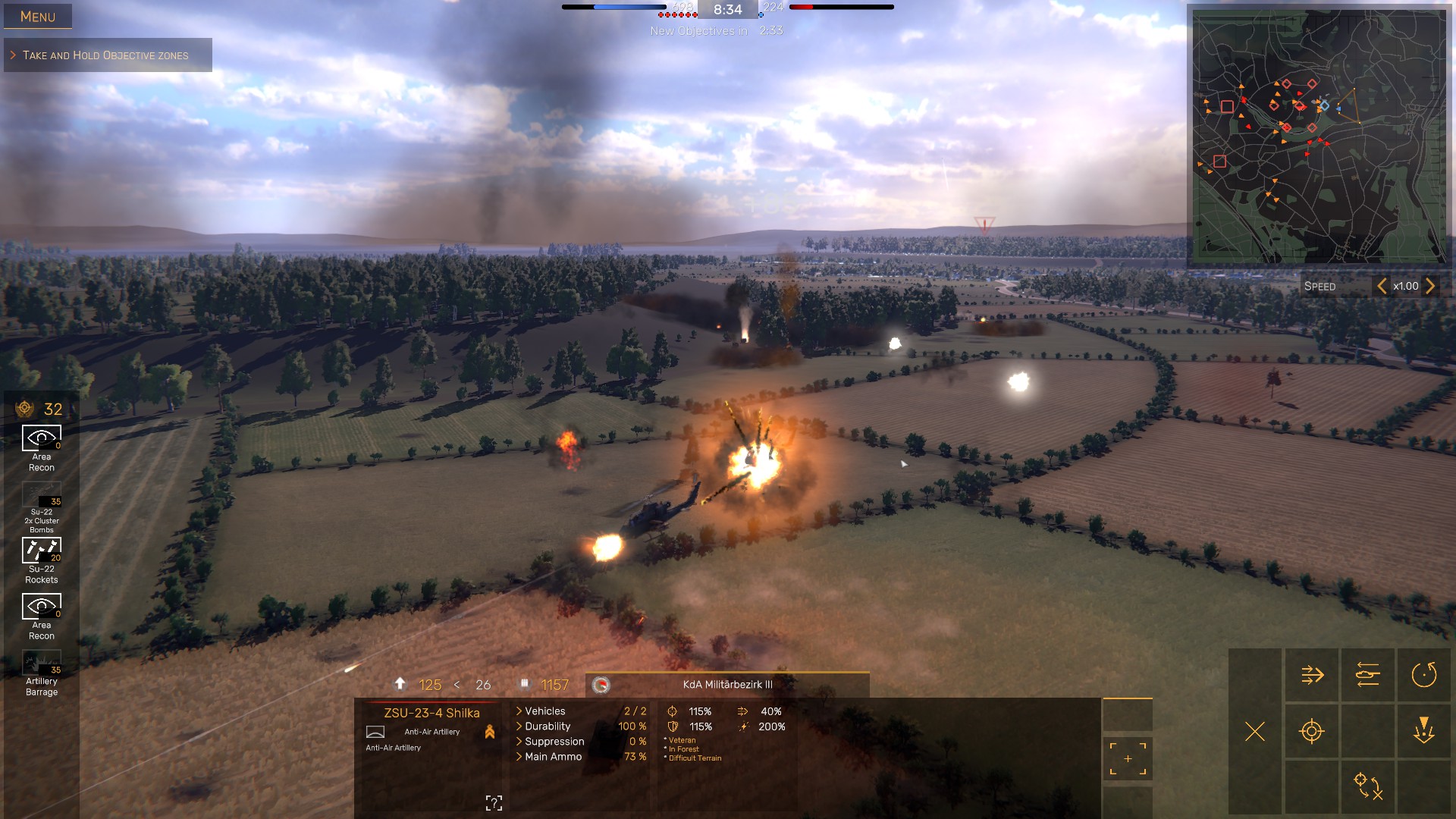 The slavering hordes of Wargame-grown Abramsphiles have doomed me to forever review Cold War RTS games set in late 1980s. But no matter how distasteful I find this period, Regiments is still a good game.

It’s 1989 and trouble is brewing in Poland. But Wargame: European Escalation already did that one, so Regiments first puts your boots on the ground when similar shenanigans start happening in East Germany. And thus starts the gradual descent into World War 3!

Like any game of the Cold War genre, RTS or not, Regiments assumes that nukes don’t immediately turn the setting into Fallout. That’s why you get to command as-of-yet uncrispened forces of the Warsaw Pact and NATO in the form of regiments split into platoons.

Regiments is actually platoons all the way down

What I’m trying to say is that the smallest unit you control is at least a couple of vehicles. Some platoons are smaller – ATGM and SAM launchers are just two per – and some are bigger – reserve tanks and infantry go above the usual allotment of four to create quality of quantity.

What this means is that Regiments will always press you to shepherd you resources carefully. You can’t just steamroll enemy forces by preserving yours and then adding more and more on top. At the end of the day, what units you can request and how many depends on your taskforce.

For example, the Panzerregiment 16 forces you control in one of the early campaign missions gives a BRDM-2 platoon, two platoons of T-72M1s, two platoons of BTR-70 mounted infantry (one of them gets ATGMs), mortars, SPAAGs, supply trucks, a flight of Mi-24s and a platoon in BMP-1s. This means that try as you might, you’ll never have more than a single platoon of BMP-1s on the field, so spend your deployment points on something else.

But that’s what shenanigans in the campaign – sorry, Operations – mode are for. Operations are of variable length – in fact, the game’s PR refers to short ones as “interludes” – usually around three maps long. But you don’t have to/are always able to finish a map in one go, so you’re usually given at least two 20 minute phases (matches) to complete them in.

Thankfully, a new phase begins where you left off, with the units holding their end-phase positions on the field, even if the time of day changes and some AI controlled sentries are added.

You can sometimes rush it and complete an exit objective early to finish faster, but Regiments still allows you to hang around after accomplishing that. Why? Because you may want to capture some secondary zones for those sweet, sweet operational authority points.

Building a force to take Paris

Operational authority points don’t extend life nor do they expand consciousness, but they are vital for refitting, rearming, expanding, and upgrading your core forces in the operations. You can choose to add up to three task forces to your core, each with three levels of upgrades, expand you deployment point limit, improve your call in time and point regeneration, replenish supplies, and allocate funds for engineering works.

And if you’re a completionist like me, you’ll really go after those additional points  authority points. More deployment means I don’t have to choose between an HQ unit and a SPAAG, it allows me to bring in more tanks at the same time, and I can have enough forces to maybe split some off to secure a flank.

At the same time, my units can flush with reinforcements and upgrades. You can’t upgrade that for core units, but a W.German task force can start out with regular M113-based HQ vehicles and end bringing in command Leo2A4s, combining HQ benefits with ridiculous firepower.

And my upgraded capacity to call in artillery and air strikes translates to more points to call them in and shorter cool-down times. Yes, this means that Regiments  doesn’t give you direct control of fixed-wing assets and or artillery pieces that would have been on the map in WARNO. But I like it. It’s very World in Conflict*, and in a good way.

Sure, dogfights might not really be a thing anymore, but ADA can still suppress incoming flights. Even better, even a plane that hasn’t been shot down can panic and leave without dropping the payload. And if I lose some, well, that’s not my problem! The chairforce guys behind the lines will scrounge up some more CAS.

Back to Operations: they come accompanied with barest bit fluff explaining what is happening and why. Prepared to read a lot about chaos and units rendered combat ineffective – it’s World War 3, baby! Unfortunately, the presentation isn’t as great, as it’s all text with some barely associative images.

Thankfully, the writing isn’t bad and the cool lines about one piece of gear or another rarely ever get too smug. In fact, you can read a  lot more in Regipedia, Regiments‘ closest analogue to Wargame‘s armory. You can’t construct your own decks, but you can certainly learn more about your units.

’tis but a simple skirmish

And that is information you’ll find applicable in your skirmish experiences as well. Skirmish (limited to compstomp – like Starship Troopers, this game doesn’t have multiplayer) doesn’t feature any economy or building your forces beforehand.

Instead, Regiments favors periodically giving you a choice of task forces to supplement your main force on the field. Every five minutes or so, you’ll be prompted to choose from a list of about ten, and this makes the game very flexible.

Some matches may make it prudent to add some tanks early on, others will beguile you with the siren call of on map artillery pieces (which actually need to be directed to fire, unlike the much more self-sufficient mortars) and stronger call-ins.

There are three game modes in Regiments‘ skirmish: Meeting Engagement (standard objective zone grab, but the zones shift), Attack (basically coop vs. entrenched forces and counter-attacks) and Mobile Defense (guarding trucks ferrying evacuation stuff from zones next to the front back to your deployment zone). And there’s a great variety of maps AND regiments to choose from.

But I feel like Operations is where the real things are and I hope Regiments will be continuously fed new ones. The earlier missions are also more cinematic and dynamic, so I’d like to see more of those and less of Firebird-type (it was the one operation in the playtest, and it’s in the game as well) “essentially linked skirmish battles” stuff.

Now, back to the infantry fix I mentioned in the title: infantry and their transports are a single unit now. Press X and the troops dismount into rigid formations around their transports. Press X again and they remount. It’s almost like a Red Alert 2-type deploy mode, but not quite. Infantrymen do appear in the field, and they fire the weapons they’re supposed to have. As the unit takes fire and dudes die, the weapons are lost as well.

A deployed infantry unit has a lot more firepower than just the transports alone, plus, the infantry act like ablative armor, taking some of the hits that would have gone to their transports. Thankfully, only vehicle losses are tracked in Regiments! Once you retreat a unit and then re-summon it, the transports will be carrying a fresh serving of footsloggers.

Oh yeah, retreats. Press Q twice, and a unit will pop smoke and reverse, with the intend to get back into the off-map reserves. They don’t fade away from the map immediately and they can still be destroyed while they’re backing up. However, this maneuver lets the unit refit and rearm and then get sent back into the fray. Units that successfully retreat can be called back in after a shorter timer and they preserve their XP level.

Knowing when to retreat and when to hold is crucial in Regiments and makes it you consider trades. And I love any game that makes you consider making bad trades. It also helps to do a bit of tactical storytelling in conjunction with the limited call ins.

In a force with 4 T-64 platoons, I’ll probably only have two at a time. But retreating them and using the points refund (after it trickles back in) to call in the fresh platoons helps simulates wave attacks that will wear down the dug-in enemy.

War may have downsides

If there are downsides to Regiments, the one I’d mention (outside lackluster presentation and lack of MP) is the travel times. Some of the bigger maps take ages to cross from deployment to your frontline, and it can be very frustrating.

You may say that it’s part of the challenge, to which I can reply that it’s a challenge of boredom as well, as you can be left with minutes of spare time. And you can only speed up the game to 200%.

But at least Regiments looks good! Of course, WARNO looks good as well, and Armored Brigade had its charm. But like with the French rival, you really don’t have the time to get to ground level and observe the fight. You’re always afraid that you’re missing something and that you need your omnipresent control to orchestrate the battle.

What I mean is that we need Armored Brigade‘s order delays or even Graviteam’s exhaustable command capacity to kill reliance on APM and give us breathing room to marvel at all the pretty pixeled tanks exploding all around.

All in all, Regiments is a fine game. It’s a bit slower than WARNOgame: EuropeanLand Dragon, which may be a boon for some, and a detriment to others. It certainly has a lot less micro, and the infantry solution is brilliant. Now, to convince the devs to add more cinematic and dynamic stuff to the operations…
_
*Yes, I know World in Conflict had some real big arty on the field, shut up, it also had a bunch of call ins.