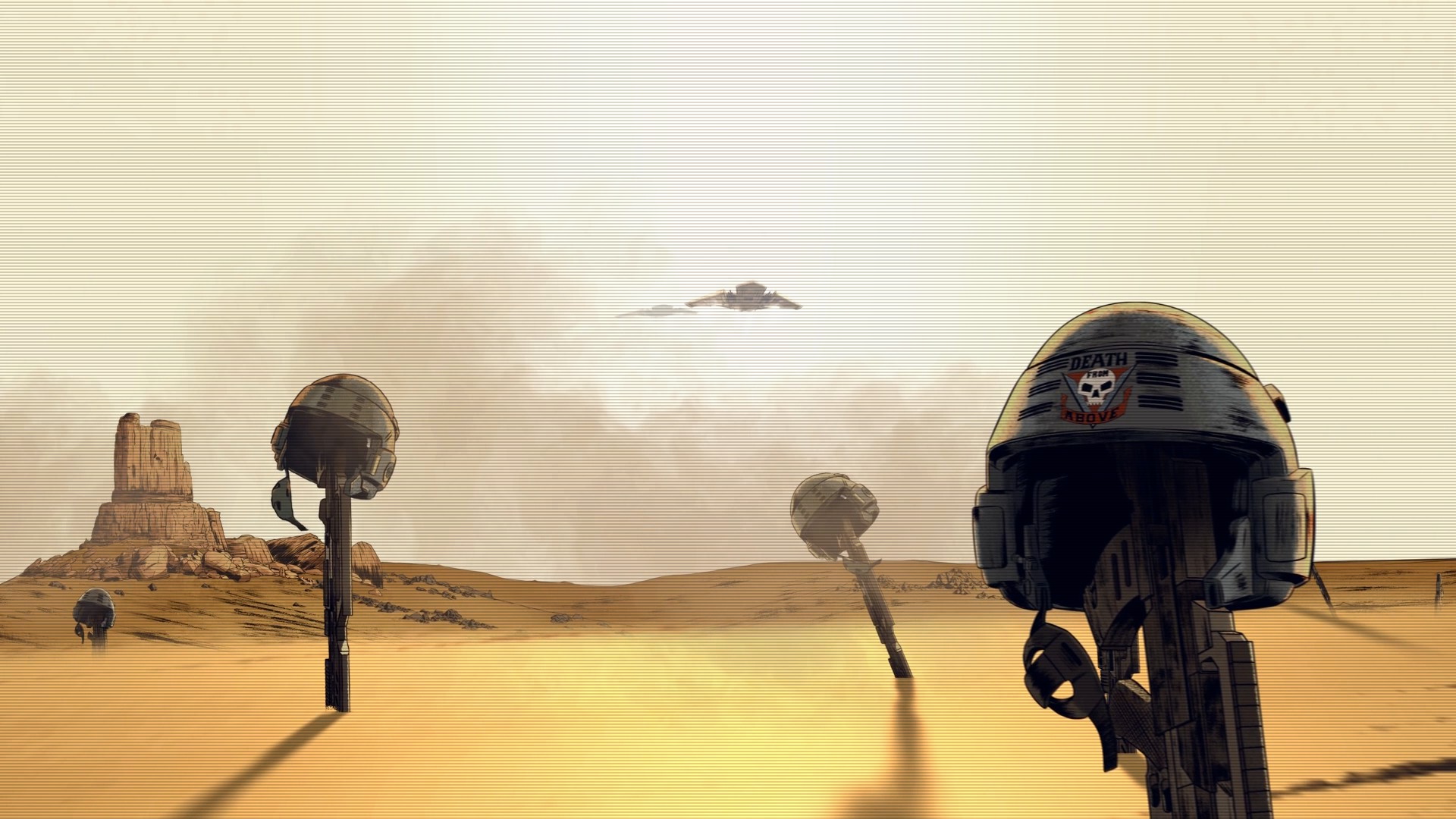 As a wee babby, I didn’t like Starship Troopers The 1997 Movie. Similarly, as a wee fascist teen, I read the book and held a grudge against the movie for not giving us the high-impact power-armored action. But I am an old now – as such, I’m mature enough to appreciate Mobile Infantry taking pre-Great War infantry tactics unto future battlefields in Starship Troopers: Terran Command.

A short primer for those who don’t know the setting: humanity is united under the fascist Federation. It’s in conflict with Arachnids, which is race of bugs with wildly different castes. The bugs, who don’t even know what a firearm is, have just soundly beaten the Federation invasion of their homeworld. So the game takes place on the mining colony of Kwalasha. Federation needs it to rebuild its strength, bugs need it for bug reason – and that’s where Mobile Infantry drops in.

We call upon our troopers, on this our darkest hour

But if Starship Troopers: Terran Command only relied on the material we saw in a 25-year-old movie, it wouldn’t be much of a game. There’s only so much battlefield fun you can extract from pushing around big blobs of riflemen. So the game takes on probably everything you see in the Starship Troopers franchise, up to Marauder mechs.

Still no tanks, though!

Now, we’re still working on the movie premise that fascists are stupid and bad at war, so the RTS is shaped around this limitation. Your basic unit is a mob of twenty guys and gals with rifles, though one of them can be arsed to throw a grenade ever thirty seconds or so. How do you make playing them fun?

First of all, you don’t let the line infantry squads fire through friendlies. This makes placement of your units important, both horizontally and vertically. Many RTS games seem to forget that elevation is actually plays a part in war – but Starship Troopers: Terran Command remembers. As you can’t use a sacrificial plug unit to keep bugs in a bottled in a canyon while their friends fire through them, you have to get a lot better at positioning.

There’s also the matter of suppression. Even bugs can feel their enthusiasm wane when under a hail of fire, slowing down on the field. And such a slowdown is what you need to capitalize on many of the timed unit abilities – or the slow rockets that rocket launcher lads carry around.

Luckily, the Starship Troopers: Terran Command is smart enough that, when it comes to ordering around groups, specialists get placed in the back. And boy, there’s a surprising amount of specialists here! No Thirty Second Bombs or nuclear rocket launchers, but you get snipers, radio men, engineers, fleet liaison. The specialists can actually shoot through friendlies, as well!

But the more surprising thing – for someone who hasn’t engaged with the franchise outside the movie – are alternatives for the common trooper. From MK II Troopers who discovered under barrel grenade launchers (and, in turn, have decreased squad sizes, probably due to casualties in training), to short-range E-Pulse troopers that mulch any bug that comes close, to power armor, there are quite a few ways to liven up your battle line. Even Marauders exist in three varieties.

And, as I mentioned before, each unit has a secondary ability, gaining another one as their reach elite rank. This doesn’t increase the amount of micro in the game too much, but some abilities are clearly better than others.

Take our simple troopers. They can choose between the ability to actually use Morita’s underslung shotgun to massively increase their stopping power for a spell, or they can throw down a bundle of grenades with a six second time basically at their own feet. One of them is clearly easier to employ and is immediately useful.

Fortunately, Starship Troopers: Terran Command is a lot smarter about base building and resource extraction. Simply put, both of them are entirely scenario dependent. Bases have a main building (capturable) and linked support building slots. How many of those you have depends on the scenario – and quite often, wanting to get a well rounded roster means going out and capturing bases in enemy territory. But that’s something you want to do anyway, because maps are often littered with capturable supplies (popcap) and optional objectives that grant support (turret and very special unit pop cap).

So no nonsense of rebuilding your base and re-researching the same +1 Infantry Armor upgrades in every mission. There’s no boring resource extraction either, as units only take up pop cap, and are transported instantly. And having recently played more Crossfire: Legion, I appreciate the ever-loving shit out of it.

That game revolves entirely around building bases in pre-set locations surrounded by two resource nodes, and then building workers that will follow the short, simple path between extraction and depositing. Sure, I understand that StarCraft did it and so Crossfire has to do it as well, but I would think that game-craft has advanced a lot more.

And codifying the system to rigidly seems like it’s almost missing the point as it doesn’t create interesting economy establishment or radiation scenarios – only who can APM the their bases up faster. It was disgusting when Red Alert 3 did it, replacing the freeform ore field mining that relied on vulnerable miners with simple nodes you plonk a refinery in front of, and it’s disgusting here as well. Did we learn nothing from Dawn of War 1?!

But back to bases in Starship Troopers: Terran Command. New bases also increase your mobility. You see, it’s not the humble foot that gives Mobile Infantry their name, but the dropship. They bring in new units, carry away disbanded ones (a nice touch), they ferry in reinforcements and, according to need, ferry units between base landing zones. And the most fun thing is that your dropship capacity is limited, so you won’t be doing all of those things at the same time.

The emphasis on mobility reminds me of the Starship Troopers Miniatures Game, which was an interesting departure from the conventions. It had Skinnies as well as Arachnids represented, which is not always the case. But the main Federation unit was a power armored trooper that could bounce around the battlefield not unlike an Assault Marine, making Arachnids (lacking ranged weapons) chase after them. A fascinating evolutionary offshoot of the franchise!

So it’s kind of sad that not a lot scenarios really require you to really engage with the system of throwing your lads around. You usually have enough forces to leave a defense at the base (or build turrets to take care of that role) while the rest mob up and meticulously crawl over the map destroying bug hives.

Oh, bug hives, the bane of Starship Troopers: Terran Command. So the idea is simple: they’re endless spawn points periodically vomiting up bugs. To destroy them, you have to get close, lure out a few larger waves of bugs, and then send the troops into the hive. Hives also often have satellite tunnels that are only cleared when the hive is down, so you have to account for them as well. Tunnels also provide strength to the main hive, so if you don’t want to send half your army into the hive, you have to aggro those as well.

The main issue is that the bulk of objectives in the game are about clearing those damn hives, and it really outstays its welcome as an idea. It becomes especially annoying when Arachnids start getting their more annoying species. Specifically, the scorpion that fires plasma from its tail. And there’s essentially no way from preventing them from firing at least once, which will kill even power-armored troops and dent Marauders.

So that’s annoying (even if having fleet liaisons or radio men around allows you to reinforce on the front line), but it’s even worse when you walk into several of them. You see, not all waves hive waves immediately Arachnidline towards your base. Sometimes, they stick around. So it happens that you might get greeted by five scorpions at the same time. Not cool!

Which is a crying shame, since missions and their maps in Starship Troopers: Terran Command seem to have love put into crafting them. As you need to funnel bugs into kill zones and use elevation to your best advantage, a lot of love and thought is put into that. Desert maps are strewn with ruined bases, and even those bases look cool.

Then you also have maps that are entirely interior, though these are limited to the coolest type of missions in any base builder RTS: the ones where you don’t have a base! Oh, but there’s a good variety of those as well, and they’re all lovely.

And the missions themselves are interspersed with FedNet propaganda about the war. It kind of gets a little tiring by the end, but every time FedNet declares a victorious operation that will end the war, you know that the next mission will start in the middle of that operation failing massively. It’s true that fascists lie as easily as they breathe, but you eventually start seeing the punch line, and the joke just doesn’t work anymore.

Plus, even the Nazis had issues with declaring victory over the USSR in the press in 1941 and people going disillusioned over that victory never arriving. Even the most hardcore Space Tucker Carlson viewer would probably wise up to the endless loop of “massive operation – massive failure!”

It is interesting, however, how the characters in the game has entirely absorbed the realities of fighting for the Federation without any friction. Even when they see FedNet lying constantly or command abandoning troops in the field, they carry on without dissent. Would be unrealistic if we didn’t know similar examples from real life.

On the more mundane technical matters, Starship Troopers: Terran Command actually looks good. It’s not AAA quality and you can’t zoom in close enough to really evaluate the troop models, but the action looks great overall. There has been a lot of love put into crafting the environments, from the deserts to mines to cities and abandoned Federation bases.

In best cases – when you’re defending one of the ubiquitous walls at night – it reminds me of the vibes of Command and Conquer: Tiberian Sun or just the action sci-fi movies of the era. From Screamers to Soldier, they all hold some simple nostalgic joy for me.

A single line about the audio: it’s OK! The unit barks are decent, event!

And now, for the final criticism of the game: I don’t know how much staying power Starship Troopers: Terran Command has. Just like the other Slitherine title about shooting faceless bug hordes (Warhammer 40,000: Battlesector), the game is entirely reliant on the single-player campaign. Heck, it doesn’t even have skirmish or multiplayer! So it’s an important question to ask: do you think those 15 hours (that’s how long it took me to beat the campaign) are worth the price? This is especially true considering replay value is a bid diminished by difficulty levels only changing how much damage your troopers do.

In summary, Starship Troopers: Terran Command is better than it has any right to be, but not without its flaws. It’s nice to see developers try new things and go new places, especially when there are many others chasing that “classical RTS” fairy. Most of the choices made here make sense for a game set in the universe of the Starship Troopers movie. Just wish they involved fewer hive clearings.