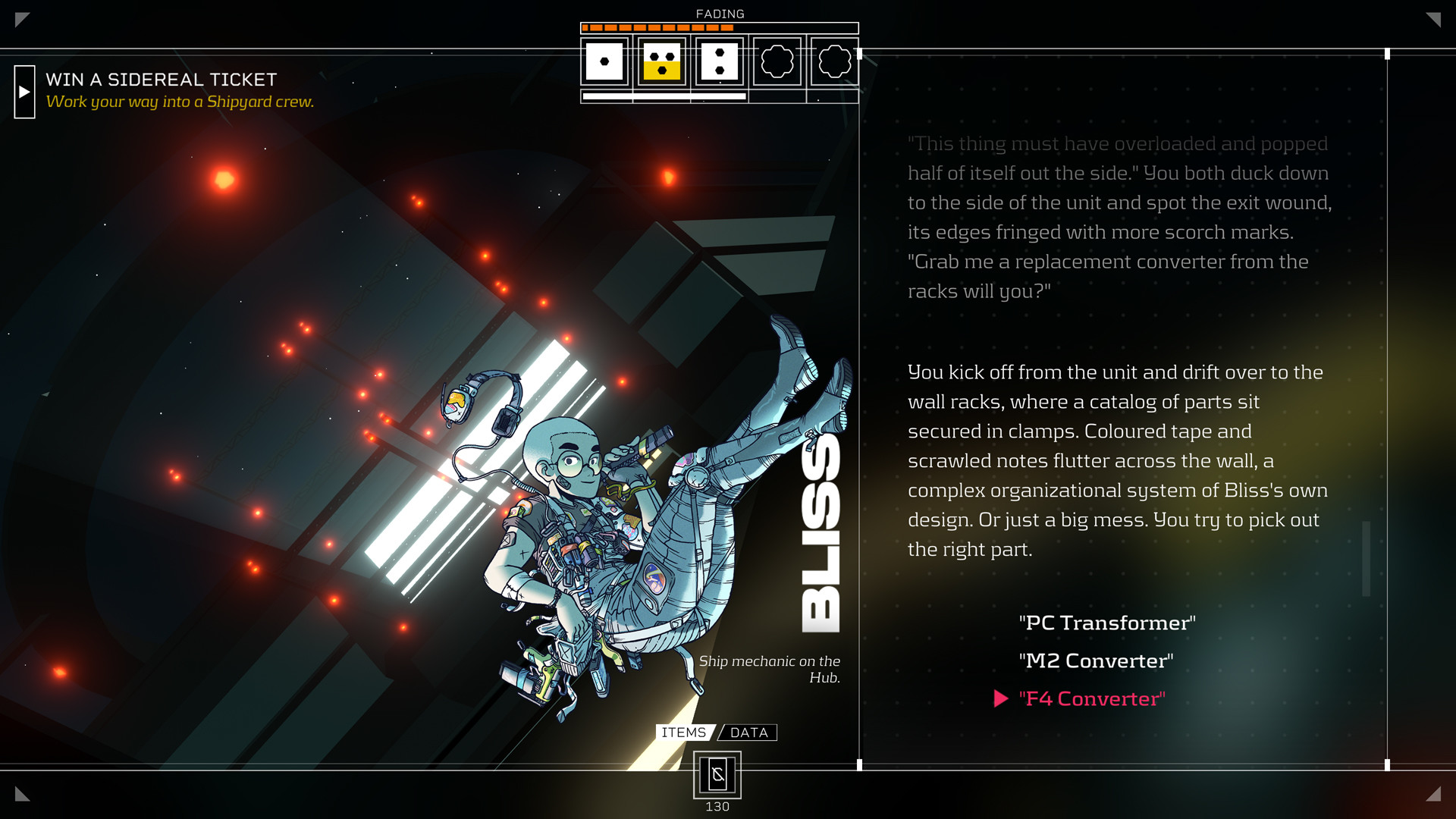 Queer storygames aren’t exactly my forte, but I’m nothing if not willing to use of my Xbox Gamepass for PC to its full potential. And Citizen Sleeper is both cyberpunk and sci-fi – I’m a sucker for that. So first I tried – and then plunged into – this game.

Far into the future, in a solar system colonized by humanity spins Elrin’s Eye: a station at the edge of civilization, a derelict but for the efforts of its many inhabitants. Into this station escapes a Sleeper, a human mind copied into a cyborg body to skirt AI bans. That is slavery, enforced by the body itself: if not fed the corporation-provided stabilizer, it starts to deteriorate (this probably isn’t a metaphor for employer-provided health insurance). But that’s just one among many pressing matters for a Sleeper in a strange land, bereft of any real past, funds, tools – or friends.

That’s you, by the way, you’ll be controlling the Sleeper. The game is proudly structured about concepts and mechanics from the more indie tabletop RPGs, so you’ll start by choosing your class. Don’t worry – it only determines your starting skills (and weaknesses), all of which you can purchase during the game.

Powered by Something Other Than Apocalypse

As befits an indie game that has to be careful with its resources, Citizen Sleeper presents the Eye as a map; the station generates gravity via spinning, so you scroll along the rim and the spokes. That’s about the extent of 3D art in the game. Any hotspots appear as markers, any interactions the given out as either tasks or text quests. Characters get 2D portraits, environments get flowery descriptions.

Mechanically, Citizen Sleeper works around clocks. As a tabletop RPG mechanic, it’s a nice way to keep tabs on progress. Some clocks are advanced as you complete (or fail) actions, some march on mercilessly as you pass days on the station. The actual timespans are abstract, which is actually a good idea – crunchy RPGs that are dead set on putting exact weights, time spans, and other stuff to track usually end up clunky and unplayable.

Certainly nobody cares about carrying capacity in Dungeons and Dragons, nor about any thing that requires you to track time in hours and days. Clocks are a great answer to that, and I’d like to claim that I had always thought, even immediately after having read about the concept in a Fatal and Friends review of PATROL by Erika Chappell. Trying to establish how much time something lasts in field, especially in a firefight, is more likely to result in the mutual annihilation blitz of Phoenix Command, where (in universe) firefights last  shorter – and yet are more deadly – than Counter-Strike matches.

As you progress clocks and do actions, you’ll gain resources, unlock new spots to investigate, complete drives (Citizen Sleeper devs insist that these are distinct from quests) and generally advance the plot. Of course, there are choices to be made in dialogues and text quests themselves, but those don’t rely on behind-the-scenes dice rolls – plus, the outcomes of your choices are much more dramatic.

How many actions can our Sleeper do in the first place? That is determined by Action Dice, rolled every morning after waking up. They are used to “pay” for nearly all actions in the game, and the higher the dice number, the better odds of success. Your skill levels add or subtract from the dice you use (as well as providing certain nice-to-have abilities).

So if you’re doing an Interface task, and your skill level is +1, then a dice roll of 5 will turn into 6, taking it from a probable success to a guaranteed one.

Paying for actions with dice a nice system I first encountered in Blackstone Fortress, though that is a very different game – not even an RPG! But just like there, it encourages you to think about your resources, accept tradeoffs and – sometimes – risk it for the biscuit. I love it when games don’t always give you the optimal choice, making you accept either risk or expenditure.

And that’s another reason why dice values matter in Citizen Sleeper. Sometimes, failures can advance clocks counting down towards something bad rather than simply hurt your finances, decrease your energy level or decrease your body’s durability.

The latter is very important as you 1) don’t want to die 2) only get as many dice as your body state allows. You are literally shutting down, of course you can’t put in all the hours that you’d want. That’s why you need to take care of that body!

Life as a Citizen Sleeper

Early Citizen Sleeper is all about subsistence – you need food for energy and stabilizer to repair the body, you need to escape corporate pursuit, and you need money for most of the stuff mentioned above. You’ll meet colorful new characters, take on odd jobs, scrounge and scavenge.

Plus, as cybernetic entity, you’re somehow able to interface with the digital shadow of the Eye. Here, your dice can be spent on hacks by matching the required number. Some of it will be useful to supplement your income, some to push story in one way or another. Of course, that’s not the full extent of it, but that something you’d better discover yourself.

And that’s how Citizen Sleeper drags you in, with the curiosity to discover, and maybe even a sense of community. Erlin’s Eye is inhabited by quite a few colorful (and, sometimes, queer) characters, each of them with their own stories and ambitions. Interacting with most of them is cozy, especially as these people, real castoffs of the larger human society of terminal capitalism, are welcoming to someone who, on corporate legal terms, isn’t even a person.

I’m sure that feeling means a lot more to someone who isn’t the pinnacle of CIS white male-dom.

Both art and descriptions – always accompanied by the unobtrusive music – pulls you into their lives, and make you want to stay there. It’s a bit like Shadowrun: Dragonfall, which experimented with putting you into a community. As a person without an actual community, I appreciate the chances Citizen Sleeper giving you the choice to become part of one.

Oh, and you do have choices, one after the other. Having escaped the slavery, the Sleeper has no set future. The Eye is a land of possibilities, so it’s only for you to decide how you’ll choose your path forward. Some are weirder while others can be more bittersweet, but they’re all yours.

Granted, no game, not even Deus Ex, is perfect. So does Citizen Sleeper have its flaws. The drives are fully identical to quests (down to awarding improvement points once you finish them), but that’s not the real issue. The problem is that many end in unsatisfactory finality.

Hey, I just accomplished great things with this person, they’re OK, they’re on the station. We’re still working together, but I’ll never get to interact with them again? What gives?! I’d like the people I meet and befriend along the way to have larger impact on my developing story than just leaving me with an endlessly repeatable action slot that allows to transform  mushrooms into energy.

Not that I’d claim that fulfilling one’s material conditions are not important in real life! But those conditions aren’t too hard to satisfy in Citizen Sleeper.

While the early game is a scramble, yes, there are so many paths and so many things to do. I stopped being hard-scrabble halfway through the game, and by the end, I was livin’ large. I had unlocked nearly everything I could, many of my skills were maxed, and I had easy access to the resources I wanted. When it came time to run down the last clock of my last drive, I had more difficulty running through the motions to consume action dice than to keep surviving.

I actually never learned what it means to run out of energy. I guess my attention to being well-fed would make any Sleeper grandma proud.

I also have a fairly esoteric complaint about the houses in Citizen Sleeper. You start out in a repurposed shipping container. “Ah,” you think. “This is the reason why sleeping causes energy loss and body deterioration. Surely a new place will improve this.” Nope! Most of the other sleeping spots are for player convenience, saving you from scrolling to the end of the map where your domicile is or having to wait through transitions between larger parts of the station.

But even then, Citizen Sleeper is a fun and engrossing game. It does a lot with tabletop RPG mechanics that mainstream is very slow to adopt. Moreover, it’s a great departure from the developer’s previous game In Other Waters, showing real growth. So hey, what’s not to like here?