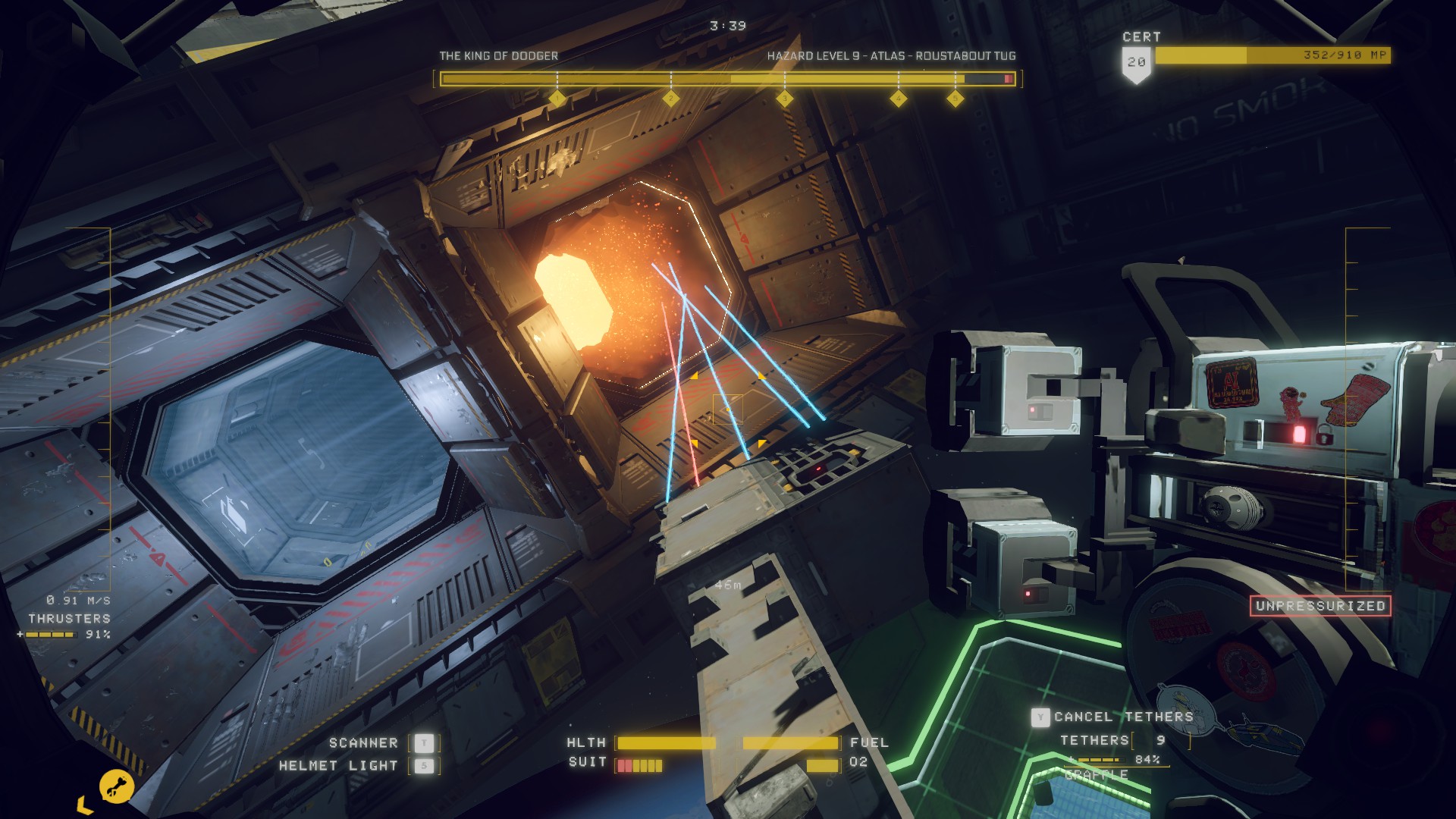 First, there was supposed to be Hardware: Shipbreakers, but they turned it into Homeworld: Deserts of Karrak. Then there was a game jam game about zipping around asteroids. After a couple more permutations, we got Hardspace: Shipbreaker, a sci-fi game about corporate exploitation and the most unattainable dream of all – a job where you actually do something meaningful.

In the far off-ish future of Hardspace, mankind is colonizing the solar system. That’s fine, but Earth is a massive dump of the same issues we have now, but extrapolated a couple of hundred years into the future. I think Venezuela is permanently on fire. Conditions like that are what helps Lynx Corporation recruit people into indentured servitude in their orbital shipbreaking facilities. The work is dangerous, but if you die, you get a spare – a clone of you just before your accident. That will be an additional $150,000 on your debt.

So aside from the philosophical and existential implications of the EverWork system explained above, Hardspace: Shipbreakers is a company town simulator, a pixelated vision of the future Musk envisions for the poor. It has a story, and, mercifully, it’s one about space peonage being bad and collective action being good. It took me around 30 hours to complete.

The wonders of a necessary job

And you know what? I liked it. I wonder if part of the charm is in the fact that, like some German forklift simulator, Hardspace: Shipbreaker a game about working at a job that’s necessary and that fills a vital niche. You can imagine ships breaking down with use, and meticulously disassembling them into recyclable or reusable parts feels like a thing worth doing.

In a world where most of us work service industry jobs in spheres that shouldn’t exist (flight compensation, free Android games etc.), and with people getting massively rich off things that definitely shouldn’t exist (crypto), that feels like welcome change of pace.

But just like in the real world, a good, meaningful job is poisoned by the rich asshole by owns it, and a bunch of middle management ticks invested with just enough power to keep the rest of us down. Hardspace: Shipbreaker even features Lynx propaganda emails retelling the story of humble beginnings of the company… where even the original owners had enough funds to start an orbital salvage company, and the current owners bought it out and renamed their existing assets after it.

There’s no illusion about self-made bootstrap giants of industry that only needed a small loan of $1 million and some Apartheit gems to make it.

My soul is owned by the company store

Yet the game also aims to be fun at the same time, so you’re not treated to whatever pale approximation of Amazon bathroom policy would be in a video game. Instead of that, you have full blown company store. All the salvage you sort correctly goes towards repaying your debt, but any mistakes are put on your tab – Lynx wins either way. It wins every day, because you buy fuel, oxygen, repair kits and more from their vending machines.

Each morning, you are greeted by an itemized bill which explains what you’re paying Lynx for the privilege of working in their yards. Of course, Hardspace: Shipbreaker is a game that’s meant to be fun, so you can technically repay the bill without engaging with the plot. Judging by the ingame leaderboards, the #1 player in the world has basically done that (it’s more complicated than that, but it would be spoiler territory).

If I have my memory right, you can get somewhere between 30 and 40 million bucks for the largest ship in the game if you do it literally flawlessly. Your initial debt is $1.5 billion and around $500,000 is spent on fees, rent, and interest every day.

You will not process a Gecko or a Javelin in a single day.

Getting better at things? In this economy?!

Still, there is mastery to be gained in Hardspace: Shipbreaker. You will get better cutting and ripping ships apart. There will be some universal challengers, ship model be damned: for example, nanocarbon bits can’t be cut by your handheld Cutter. But you can learn the structural cut points placed around the ship for quickest dismantling. And if you can chuck those nanocarbon shells into the processor in large chunks, you can save time, bother, and clicks. After all, your shift is only 15 minutes, so you better hurry up.

You feel good and smart about mastering work routines, and imposing your own rules. For me, everything starts with ripping off anything that’s outside the ship. Then, I’d get inside to depressurize as many compartments as I could. This would clear the way for peeling away the hull in preparation for the reactor extraction.

I’d then salvage the reactor, the most expensive – and explosion happy – part. If there were parts of the ship that couldn’t have been safely depressurized, I’d salvage anything that could be ruined via explosive decompression. It’s all stuff like that.

Eventually, there is a solid sense of accomplishment when the nearly-intact aluminum carcass of the internal rooms and corridors is sent sailing into the furnace. You get pinged with some fines for the lights and doors that you didn’t salvage, but who cares? It’s only a thousand or so per fixture – that’s chump change when compared to the money you just got for the structure – or your debt of hundreds of millions.

6 hours for sleep, 15 minutes for work, 17 hours for posters

If there’s something to complain about the routine of the Hardspace: Shipbreaker, it’s the hab(itat) sections. While you can customize them a little by collecting posters from the ships, it quickly runs out of interesting things (and posters).

At first, you’re getting company emails and chats with coworkers (though the latter are boring, as you don’t have anything to do but bounce around the hab while they play), but those run out fairly quickly. Even if you collect data drives on the derelicts for later decoding at home, only the text-based ones need that. The audio files can often be played instantly, so going home and decoding just clears the alert on you terminal and does little else. .

So most of the time, you wake up, listen to one of five Lynx morning greetings, look at your expense/income tab, and rush to the workstation to upgrade and repair your gear. You may think that it’s commentary on the drudgery of daily routine in late capitalism, I just think that it’s a boring misstep in gameplay design.

Speaking of equipment, you can customize it with stickers that you collect for achievements as . They don’t really do much to me, because the only time I really noticed them is when I saw that one blocks off a good part of the heat gauge on the Cutter. You have so many other things to look at that your tools are nearly invisible – and, unlike a typical FPS gun, they’re really out of your way.

Upgrading said equipment is similarly a dry affair, as upgrades are just iterative increases in power rather transformative changes (most of the time), which is very underwhelming. But since grappling something you can move with the Grapple and then reeling yourself is a legit move, I did notice the increased Grapple range that allowed me to zip around the bay.

I’m also not that hot on the ship variety in Hardspace: Shipbreakers. Yes, there are four classes that have fairly transformative subclasses, and the component layout is randomized. But once you take an Atlas patrol vessel apart two time times, you’re not aching for a third one.

And even with the tricky components like Class II reactors, the biggest question is usually about safely depressurizing the compartment they’re in rather than following their removal procedures.

On the other hand, Hardspace’s Homeworld-derived provenance means that we have some cool spaceship designs. I don’t know if you need to have grown up with Chris Foss sci-fi book covers to really appreciate it, but bright-ly colored, flat, angular ships are a breath of fresh air.

Most of the designs we’re used to seeing these days are recklessly festooned with panels, overdetailed and over-greeble-d. The simple designs shine through all the time, and works especially well with the structures and ships you see outside the bay.

A word on audio design: good. More words: the songs are repetitive, yes, but unintrusive enough that the country rhythms never felt stale.

There’s questionable utility – certainly from SEO perspective – in reviewing a game that launched after a couple of years in well-received Early Access. But hey, I played Hardspace: Shipbreaker for one review, so why not write two? After all, the game is good, and it’s gameplay loop lends naturally for expansion via multiple DLCs.