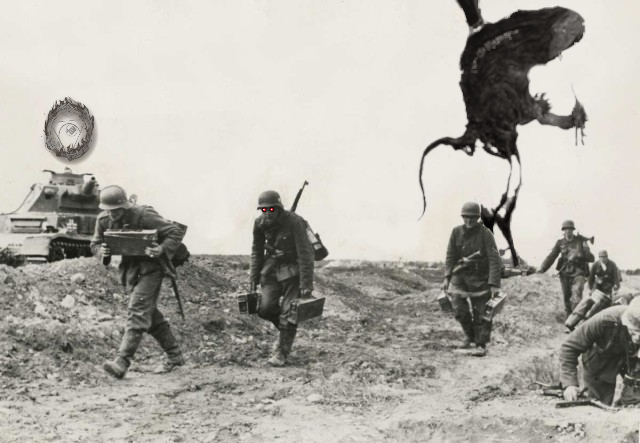 Weird War 2 is the most boring thing that can happen to a World War 2 game not set in Normandy. From Nazis getting super tech to engaging with Cthulhu and other occult powers, you’d think it would be an interesting genre. It isn’t. I’ll focus mostly on the boring tropes that make the magical Nazi mundane – and how we could improve on it.

The Issue: Weird War 2 is usually set in the late war, when the Nazis and other Axis powers are already getting spitroasted by the rest of the world. Apparently, that’s when the situation becomes precarious enough for Nazis to turn to devil-stuff to turn the tide – when their armies are already collapsing everywhere while Allied industries outproducing them to frankly ridiculous degree.

The solution: set it earlier in the war. Like, much earlier, winter of 1941-1942. Why? Because that’s the period when Nazis run into their first deadly serious setbacks. Yes, neither Poland nor France were cakewalks, no matter how hard pop culture tries to forget it.

But it was in Barbarossa that your Panzer divisions were ground to a nub, their rolling stock and trucks falling left and right, and so on. Yet Germany still has a lot of fighting men, the Axis allies haven’t died out either, and there are the masses of unkilled POWs and unpurged populations to work with.

The Issue: when it comes to miniature game-oriented Weird War, there’s a tendency to get Soviets to fight everyone… for no good reason. Is it because the end of the war places Germany in such a bad situation that even supernatural intervention can’t possibly prevent them from being crushed under the threads of T-34s? Or do the game designers feel like they need some justification for the players who want to slap US vs. USSR?

The Solution #0: Oh my God, who cares about fluff justification for two armies running into each other. Flames of War doesn’t care, Bolt Action doesn’t care, Battlegroup doesn’t care. Fuck off with this nonsense, nobody is running every game as 100% lore-accurate.

The Solution #1: Just like with the previous point, place it shortly after Barbarossa. The Allied powers are still on the ropes, the cream of the German youth isn’t fertilizer for the wide plains of Ukraine yet, and German industry exists in a state other than “bombed-out rubble.”

The Solution #2: One thing that’s notable about Barbarossa is how many Soviet POWs were left to just die from exposure. But if they haven’t died yet, they can be fodder for all sorts of things, from demonic sacrifice to mass possession to mind controlled armies under demonic demagogues.

The Solution #3: Do you remember that it wasn’t just Germany and Italy causing trouble in Europe? You also have all sorts of opportunistic and collaborationist governments in Romania, Hungary, and other Axis minors. Allow them to die for their little Fuhrers as well.

The Issue: the Nazis are now fully armed with Panthers, Super Panthers, Maus-es and other terrible paper Tigers straight out of the wet dreams of Ferdinand Porsche/Wargaming.net. Usually, it’s more of an issue with scenarios where Germany holds out to 1946 or so without any supernatural elements – but it still goes for the most played out/dumb/ugly stuff.

The Solution: How about starting the game before Panthers became an issue/a thing? Look, I know you want to cash in on all the wehraboos who make every company produce a more extensive inventory of German miniatures than of all other the powers combined.

But how about breaking the mold and making the Nazis go crazy putting an unhallowed chapel on a Pz.38(t) and daubing Panzer IVs in blood? He who dares (to step away from Normandy landings) wins, after all.

The Issue: so you’d think that going Weird would make World War II battlefields full of fantastical new stuff? No, you fool! It’s all about giving Nazis werewolves, vampires, zombies, some sort of Gas Mask Longcoat elite infantry, and Hanomag +1. People feel more original than that go for Cthulhu, which is a ground so well trod it’s a canyon now.

The Solution: Yeet Cthulhu and MGM monsters out of the window and embrace the demons. Do you want to go a bit Wayne Barlowe and provide a fresh take on Abrahamic devils? Want to do something more aliens and freestyle? Fancy some body horror in your horrors of war? Straight up ripping off 40K? It’s all yours if you but try.

The Solution 2: instead of demons and dark science being drawn out by the efforts of Nazi occult scientists, lean into Nazi warcrimes and inefficiencies to produce the beacon that attracts the dark powers.

Humans that are very callously killing other humans, not even working them to death? Now that’s something some demon who’d love to have thousands of slaves to build him a castle might find attractive.

After all, if they’re destroying other humans without any material benefit to themselves (and, in the case of eliminating the ghetto that was producing winter clothing even as the armies were freezing in Russia, to their own detriment), they probably wouldn’t be against using those same undesirables for demonic deeds.

The Solution 3: you know what sacrifice is most metaphysically pleasing? When it’s important to the one doing the sacrifice. That’s why Abraham wasn’t asked to kill some random redheaded orphan, and that’s why you have never heard of a dragon demanding to be fed wizened spinsters.

So what’s the most important sacrifice for Nazis? Themselves. So make the blonde, blue haired SS officers have the option to engage in with the old 40K greater demon possession rules. Have Leibsgarde Adolf Hitler be full of possessed Nazis.

Sure, the Wehrmacht, not being clean by any measure, can play as well. I just think it’s a lot cooler when you have the most ardent Nazis playing into demon hands and stabbing themselves with cursed daggers.

The Solution 4: We’ve already talked about Axis Minors. So why not give them their own weirdness? Whether that’s just some local color – like Romanian-exclusive vampires or Finland employing Näkki – or some lesser demon houses having to make do with Smoll Nazis, you can draw unto a lot of nonsense.

Blood-drenched executioners taking their serbcutters against people who can actually fight, priests that guarded concentration camps taking the next logical step and worshipping some greater devil, Vitezi Rend fanatics piercing their skin with cursed steel because HUNGARY STRONK – the possibilities are endless.

The Issue: If Nazis always get the same roster of Universal Monsters, then Allied and Soviets always get the same boring shit. Power-armored infantry that’s barely any different from IP to IP, jetpack troopers, maybe some sort of bear infantry. I fell asleep half a sentence ago.

The Solution: look, the Nazis are letting demons joyride in their bodies and “Positive Christianity” is turning churches across Europe into sacrificial abattoirs. Doesn’t it sound like the time for heavenly powers to intervene somewhat directly?

From frontline chaplains to Orthodox priests leading the charge with burning crosses in hand, you don’t need to look far. You can have Soviet zombies that spontaneously rose up to die for their living comrades again. You can have those huge mobile crosses and altars from the Crusades – now placed in Universal Carriers.

Heck, have an angel drop down to cleave a demon juice-pumped SS Obersturmfuhrer in half. Doesn’t even have to look like the awesome beardo from Heroes III – you can lean into wheels-upon-wheels stuff as well. Remember: it’s not body horror if it’s a spirit.

The Solution 2: you know who might also be not interested in a thousand year demonic Reich? Whatever regular supernatural critters are around.

Bolster Soviets with whatever you interpret Baba Yaga or Chernobog to be. Make Arthur come back to help out Britain in its darkest hour (and maybe lop Churchill’s head off for Benghal famine stuff). You can even have a burning Jean D’Arc lead the Poilus into defeating Vici France.

The Solution 3: Fuck Tesla. His name never added any quality to any setting outside Red Alert, and it only worked there because it was a synonym to “electric.”

Look, he wasn’t the only STEMlord with weird ideas at the time. Lean into those weird designs from Popular Mechanics. Get those battlebusses dreamed up by science writers who pathologically couldn’t understand war, and bring them to the tabletop. I mean, will any of that shit will be any weirder that M3 Medium?

The Issue: This may also be an issue with WW2 gaming in general. It’s always about Normandy, Battle of the Bulge, Market Garden. If they remember that Eastern Front exists, you’re treated to Stalingrad, Moscow, maybe Operation Citadel. Nobody is really in a hurry to break any new ground.

The Solution: Weird War 2 should remember Africa: while not exactly forgotten in Regular War 2, it’s still an underutilized battlefield when it comes to ghouls and goblins. There are also things happening in Greece, and Italy can be considered at some point.

Colonial troops in the desert can bring their own weirdness, from Maoris boosting themselves with haka to match the possessed Africa Korps. Sub-Saharan Africans remembering the teachings of their grandparents. And then South Africans… actually I don’t know what they can bring to the field besides racism.

The Solution 2: Hey, noticed that we haven’t mentioned one of the Axis power yet? That’s right, Japan is in this as well. Did you know that it fought forces other than just USMC? It’s true!

Have Japan strike out into China, Burma, New Zealand and other places with their own dem-oni-c advisers! Have them run into the already mentioned frontline chaplain led Brits, Maoris burning with the power of their facial tattoos, and dare-to-die KMT troops ablaze with heavenly power.

You can also apply the cherubim-weirdness to Asian stuff. Or, fuck, have an archangel charge a land-crawling Yamato atop a Kirin. God(s?) ain’t have to explain shit.

The Solution 3: now, a lot of folk creatures aren’t exactly described as friendly. So have them infest your battlefields.

From haunted houses filled with angry ghosts of Nazi victims lashing out against anyone that comes close, to peat bog dead rising up to drag the living down with them, to fuzzy-wuzzies telling Commonwealth troops how to defend themselves from jungle spirits, this has potential to introduce both more weirdness, and more dynamics to the battlefields.

A note on warcrimes: Nazis did a lot of warcrimes, crimes against humanity, and just regular crimes. Now, most WW2-related gaming is entirely sanitized of anything like that. Well, you can spice it up by describing all the Nazi warcrimes that happened before the time of the game and how it accidentally attracted demons instead of demons influencing them.

You can even have a stark break in formatting: describe the lead-up to World War 2  and it’s early history before transitioning into Weird War 2. A good way to tell about the stuff that Axis minor got up to!

Follow some or all of the guidelines set out in this post and one day, we may have a Weird War 2 setting that doesn’t suck.