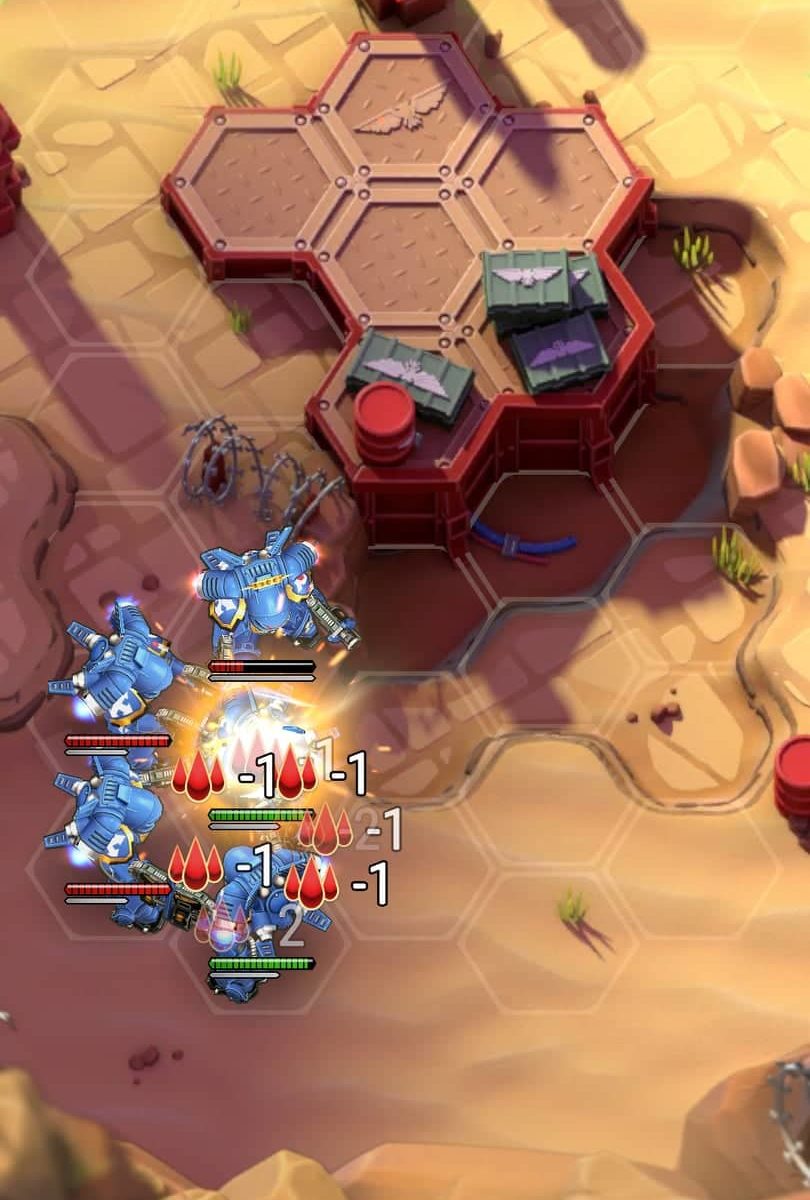 When I finally got into the Warhammer 40,000: Tacticus beta pre-launch, Snowprint Studios hadn’t yet replaced their standard intro. So my GRIM DARK tactics were always preceded by a cheerfully smiling snowflake accompanied by a fairy “ding!” I thought that was funny.

Tacticus is a turn-based tactics mobile game, but  unlike Warhammer 40,000: Space Wolf (which I redownloaded just now), it doesn’t have a set plot. Instead, in mobile game fashion, the campaign consists of a few isolated sets of missions taking you to the Indomitus Crusade, Fall of Cadia, and Orctarius. But the story is spread real thin here, and with a variety of game modes fit for a F2P mobile title to choose from, it dilutes the focus even further. However, that’s nothing compared to the progression issues…

Checking the index on the Codex Astartes

Before we venture deeper into the grim darkness of free mobile games, let’s lay down the basics. Warhammer 40,000: Tacticus is a turn-based hex grid tactical strategy game, played on very small maps – sometimes, only one move is necessary to get to fisticuffswith the enemy.

You act with all of your (three-to-five) characters before passing the turn to your opponent. You control characters both named and branded – like Primaris version of Ultramarines Chief Librarian Tigurius – as well as those that are more generic, gaining a name only for this game. Apothecary Incisus stands out for how silly his name is. Characters come five per faction – five Ultramarines, five Death Guard, five Necrons, etc.. The factions themselves belong to metafactions: Imperial, Chaos, and Xenos, as per the decree of Games Workshop web store.

The combat mechanics in Warhammer 40,000: Tacticus are passably deep. A character can move and attack, always in that order. The attacks always land, but the damage output may vary. Armor resistance meets armor penetration, heavy weapons deal less damage after moving, and terrain or troop types can negate (or demand) using attacks that do multiple hits.

Aside from that, characters are blessed with one active and one passive ability. Active abilities are once-per-game, like the Eliminator getting a powerful blast that pushes the target back or the Inceptor Sergeant calling in his squadmates, in numbers equivalent to the turn counter. Passives are always on and often impactful: Heavy Flamer SoB will splash damage after her hit, and the Inceptor Sergeant’s attacks will trigger adjacent AI Inceptors to attack again.

A galaxy of war

With that in mind, we can delve into Warhammer 40,000: Tacticus’ game modes! Campaigns are only a linked series of bespoke skirmish scenarios against AI troops – and even have some dialogue before and after the fight! Each campaign is split into five chapters, consisting of about 20 battles each, with every chapter culminating in a boss fight against an unlockable character. You don’t unlock them for the effort, which is very lame and goes against every instinct you have as a gamer.

Indomitus is the first campaign, pitting Ultramarines (and a Sister of Battle) against Necrons. The Necron mirror campaign sees you confront a mix of Imperial Guard AI troops and generic versions of the Ultramarines characters. You can only play it after you unlock the three required characters, which can be a tall order – let me remind you, beating the campaign chapter boss doesn’t unlock them.

The rest of the game modes are less sexy than even that. Arena is semi-multiplayer, in that you control your squad against what I assume are five most powerful characters of some other player.

The opponent is controlled by AI, entirely how Warhammer 40,000: Combat Cards used to be (or still are). I haven’t seen any stats or notifications about whenever your crew goes to fight under AI controls, so victories and defeats in the Arena matter only to the active player.

There were/are also Tournaments, which are actual multiplayer battles against flesh and blood opponents. They are enforced by a very harsh clock, emphasizing Warhammer 40,000: Tacticus fast nature. It’s probably the most exciting feature for anyone who isn’t an SP campaign purist like I am. You get in, you beat someone or get beaten, throw some pre-programmed reactions their way, repeat.

Onslaught pits your characters against waves of Tyranids. Salvage pits you against waves of orks and items. Players belonging to a Guild get an additional mode: fighting against a big Tyranid gribblie that needs to be whittled down over several fights.

Vraks saw less grind than this

The thing is that enemies increase in difficulty not by tactics or powers, but by gaining stat increases. This can turn Necron Warriors from one-shottable nuisances into genuine threats, Scarabs into one-shot nightmares, and Arena/Tournament opponents into unbeatable murder beasts. To keep your characters up to the task of killing the alien, the mutant, the heretic, you have to improve your troops as well.

But as we live under a system of economy where you desperately have to make money, with any sort of character improvement coming via grind and monetization. Allow me to try and lay out all the ways your character has to be upgraded to keep up:

If I missed some part, this just proves my point about how messed up the system is.

Tokens and orbs also have their own rarity stats, just so you know.

How do you gain all of this stuff? First of all, by grinding. In Warhammer 40,000: Tacticus, Character XP is gained for essentially all fights, so that’s why its effects are so weak. The rest can be painfully extracted from the limited game modes.

I’ve been informed that these are all standard gacha tricks of the trade. Unique materials in time-limited game modes, dailies, raising player level to get access to better boxes. The list gets tedious if it’s written out point by point.

Even the Warhammer 40,000: Tacticus devs understand that this is tedious. That’s why raids exist for campaign battles. As long as you finish it with three stars (none of your dudes died), you can raid it up to nine times a day to instantly get the reward. You still use raid tokens and energy, but hey, massive time savings!

Each of the battle types I mentioned above require a specific type of energy or token, all of them very limited, and only the one used for campaign battles regenerates at anything approaching a sane rate. Moreover: the aforementioned raids need both campaign energy, raid tokens, and for you to not have exhausted the permitted daily win limit for the specific mission.

Let me tell you, folks: those victory margins are thinner than rice paper. It’s especially egregious with character shards – remember, this is what unlocks and upgrades characters. Once you need 100+ to unlock a dude (for example, Harken Worldclaimer is the biggest barrier to the Cadia campaign as he needs 250 shards) or ~30 to promote their rarity, the 1-2 shard drops just don’t cut it.

To put on my Noah Caldwell-Gervais hat, this wrings out all the joy of the actual gameplay. Your accomplishments on the battlefield are hollow; your tactical provesse secondary to your ability to hoard resources. A Space Marine Librarian lives or dies not by planning or positioning, but by carefully orchestrating resource extraction rates. The game of war becomes secondary to the game of resource grind.

You can avoid this by going to a crossroads at midnight and engaging with the store. And the game will never let you forget that you could be spending your real cash money to unlock stuff.

There aren’t any cosmetics to purchase now, so it’s all microtransactions to buy the game’s currency, premium currency, characters, upgrades, and so on. For real money, of course. And there are things you can purchase with the premium currency – like picking something from the constantly rotating assortment of upgrades and other drops.

Don’t like the goods on that sale? You can endlessly watch ads to refresh the list until you find something interesting or they commit you to a facility. This is not the only spot in Warhammer 40,000: Tacticus where ad videos are presented as an option, but these are probably the only ones you can just watch however long you need to.

So what we got here, folks, is a classical case of a free mobile game, monetized in all the most annoying ways conceived by man. The only thing missing is a pointless timer-turning base building segment and a meaningless world map for attacking other players.

I’d love it if the combat mechanics of Warhammer 40,000: Tacticus remained, the current monetization model was defenestrated, and the only thing you could buy was cosmetics. It could work wonderfully if the rosters were filled with tabula rasa generic characters that you could then name and play dress up with.

So give me an Ultramarine Librarian, a scout, an Inceptor sarge, an Apothecary and a Captain. Sell skins for Tyrannic war veterans. Sell pauldron rims for the UM companies and Death Watch pauldrons for those who want to pretend that their pixel truppen had done a tour duty there. Sell additional purity seals and fancy helmets. Allow me to present my swag to the audience of my rivals and fellow tacticusians.

At least it looks good

But back to Warhammer 40,000: Tacticus. One thing it has over quite a few other mobile games is the visuals. Games Workshop has a lot of miniatures to offer as visual references, and the 3D models look quite nice on the 2D battlefields as well as the armory.

It also combines with the audio quite well, especially when the heavy flamer SOB overkills an enemy, causes splash flame damage to the surrounding hexes, and kills friendly characters. Just a wonderful synthesis of sound, visual effects, and the knowledge of what you’ve just done.

And I don’t think it was that hard for Snowprint Studios to accomplish, having previously developed Legend of Solgard, a puzzle RPG, and Rivengard, which is the same game as Tacticus.

From the way the (unskippable) tutorial is arranged to elements of the UI design, Warhammer 40,000: Tacticus looks like a 40K mod for Rivengard.  Even the speech bubbles change into the same burst form when characters are supposed to be shouting. Of course, Rivengard was made for kids, and Warhammer 40,000: Tacticus is made for adults, so it has some more advanced mechanics, like armor and armor penetration, and razorwire not only stopping movement, but also causing the character to take more damage.

Granted this is neither new nor unique. Like nothing else on Earth, 40K mobile titles have always attracted developer pitches like “this game we already made, but 40K now.” My first introduction to the phenomenon was when Rodeo Games made their Hunters game template into both a Warhammer Quest and a Warhammer 40K: Deathwatch. Or, potentially, when Eutechnyx sharted out Warhammer 40,000: Storm of Vengeance, a piss-poor reskin of their Plants vs. Zombies clone Ninja Cats vs Samurai Dogs.

At the same time, it’s not always a bad thing. Everguild made Horus Heresy: Legions on  the bones of Drakenlords, a fantasy CCG. And I’ve played a shitton of Legions.

Warhammer 40,000: Tacticus is a neat game hamstrung by an attempt at monetization less graceful than GW’s obsession with selling books. With better writing and a better monetization model, it could be a neat bus game. At present, you’re better off playing Space Wolf.