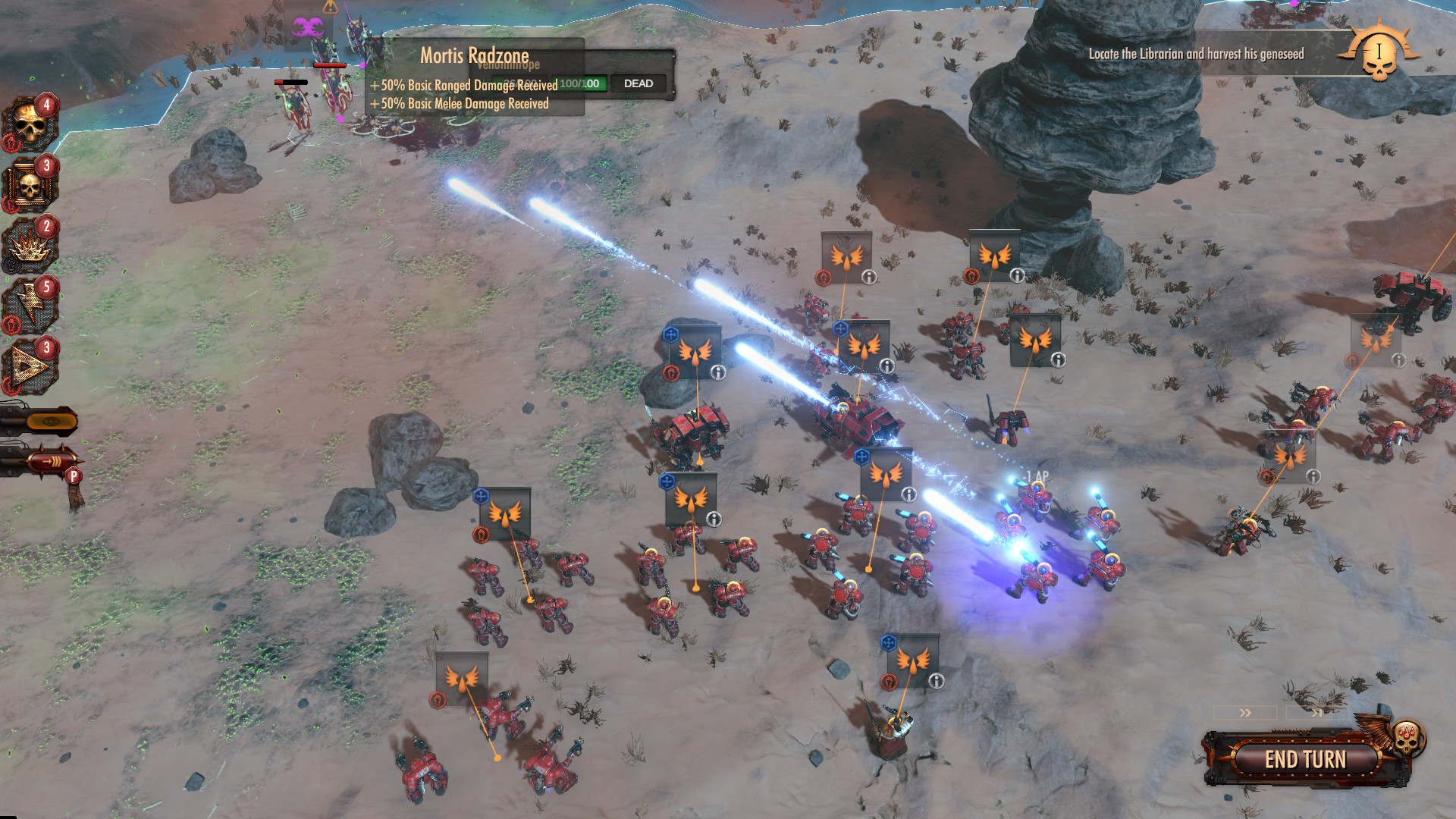 “Strategy video game with Space Marines” always piques my interest, especially since there’s no good analogue version of that. While I was initially skeptical – Tyranids are racing and disgusting neck with Nurgle for the coveted “most boring Warhammer 40,000 video game opponent” trophy – Warhammer 40,000: Battlesector won me over via good gameplay and obvious craftsmanship.

Real ‘Hams heads know: Blood Angels’ home system of Baal got devastated by the Tyranid Hivefleet Leviathan, with six full successor chapters (never mentioned anywhere outside the book that informs us of their demise) falling in the defense. Then the Great Rift and daemons happened, which actually helped by swallowing the bug fleet into the Warp. Eventually, even the  Avenging Rowboat arrived with Primaris reinforcements. So the war is over, time for clean up. There’s still a lot of bugs on Baal Secundus, and veteran sergeant Carleon will have to wipe them out, chainsword in hand.

The best part about it? The regular single player campaign. None of that dYnaMic CaMPaiGN nonsense, no RISK maps, just a story going straight as an arrow. If it had featured in-engine cutscenes, it would be almost a match for the Blood Ravens campaign in Dawn of War 1.

The Codex Astartes says that this is a good game

Granted, Warhammer 40,000: Battlesector is not an RTS. It’s a TBS game, with you commanding up to 20 units in the field. However, it’s a fast TBS, as Black Lab Games made it possible to give orders to new units before the previous ones have finished theirs. So you may have a large army, but it all moves at a steady clip, and you get to witness some beautiful simultaneous attacks.

Speed and aggression are also encouraged via the Momentum mechanic. Your troops collect it via various means, but the most usual one is killing. Blood Angels’ faction specific trait – aptly called The Red Thirst –  even gives more Momentum the closer you are to the enemy you just blasted apart.

Once you fill the Momentum bar, you get to choose between Surge and Empower. The former gives you an Action Point, the latter lets you use a boosted version of an ability the unit has. What can I say, Momentum is a powerful tool in Warhammer 40,000: Battlesector, especially when it allows a Baal Predator to burn two Tyranid units to death, slurp up the Momentum, Surge, and then burn two more. Heck, the crazy lunatics of Death Company work on the idea that you’ll be triggering Surge constantly.

Momentum system also punishes passivity. Go on Overwatch? that’s -10 to the bar. Finish turn without spending the Action Point? You fool, you could have at least used it to get one square closer to the enemy – here’s a -20 for you! Keep that Momentum flowing and nothing will be able to stop the crusade of the righteous.

Gameplay directly out of the holy STC

Right, I should probably describe the other mechanics as well. Units move on squares, with a regular unit usually having around 4 movement points to spend. There are no terrain modifiers for that, so you’ll always get your worth. The units also get an action point (heroes get more) to use on attacks, abilities, or to just move an extra square.

Now, when it comes to fighting… There are quite a few mechanics at work in Warhammer 40,000: Battlesector, from range, damage, armor penetration to cover, overwhelming melee attacks, suppression via overwatch and ranged stability. But you know what? You don’t have to worry about any of those things, because the you only get the data you need when you need it.

So when you’re attacking, you’ll get to see at how optimal a range you are at, how many shots will be fired, damage per shot, and accuracy. This is important, as each trooper in a unit is almost a unit unto itself, with their own health bar and whatnot.

It also plays into weapon balance as well. The best example here is Hellblasters. Normally, they fire a burst of weaker plasma rounds – plenty to put some hurt on a pack of 10 Gaunts. But if you give them heavy plasma incinerators, they only fire five shots. It’s enough to put a Tyranofex at half health, but when you’re shooting at Gaunts, you’ll kill five at best.

Melee also works similarly, where heroes are best at fighting individual monsters while units are better at killing units. However, I think the hero melee splash damage was boosted since the previews as to make a thunderhammer-armed Carleon an actual threat to gaunts.

So yes, there’s a decent variety and depth to combat in Warhammer 40,000: Battlesector. This holds true for ability balancing as well. Some units have self-boosts that provide great benefits to their primary attack mode – but also makes them vulnerable to the opposite. So if you really want to activate Assault Marines’ melee turbo boost, beware of that -75 penalty to ranged defense you’ll have next turn.

All things together, Space Marines are the tough faction of the game, with good range, self boost and endurance all around. The units are mix of Firstborn and the first wave of Primaris – so Intercessors, Hellblasters, Aggressors, Inceptors, and a Librarian. Tyranids go between trash infantry and huge monsters, and the trick up their sleeve is poison. But you don’t get to control them in the campaign, so does it really matter?

Yes, I absolutely loved that Warhammer 40,000: Battlesector features a campaign but for a single faction. People complained about that at the time when Dawn of War 1 came out, and look what that got us! Dark Crusade laid down the pattern for lazy RISK maps that just give your skirmish battles, and Retribution gave every faction in the game a campaign, sure, but it was literally the same campaign, but with different soundbites.

(I only remembered that Dawn of War 3 was a thing in the middle of that paragraph).

No, having a single-faction story allows us to get to know the characters better, learn what they’re about, and get invested in the story. And that’s where the strength has to lie, because Tyranids are the NPC race, lacking characters by design. There’s no face this cosmic pest infestation can have, so Carleon and others have to carry it all. And in my opinion? It all works.

An especially lovely bit is that you get to control three types of Sisters of Battle units during the game. Why do I like that? Because the more Units Not Available In Multiplayer appear in the game, the more obvious it is that the campaign wasn’t phoned it. Plus, it reminds me of the Guardsmen you could save and lead during Dawn of War 1.

Blessedly, the campaign saves us from the indignity of fighting boss battles. Any Tyranid gribbly you need to take down acts by all the same rules as all the other units, and doesn’t even have an inflated health pool. The challenge of getting to them through the chittering hordes is enough!

But since we’re getting near the end of the review, it’s high time I did some bitching. First of all, the campaign. This is the third review where I’ll contrast it to the one in Warhammer 40,000: Sanctus Reach, and here’s why: Sanctus Reach gave you reasons to care about the survival of your troops. They were both mechanical – troops accumulated XP and upgrades – as well as sentimental (they also had names).

In Warhammer 40,000: Battlesector, you barely get the sentimental part, as the units don’t even get individual names. They don’t accrue XP or individual upgrades. Rather, when you unlock an upgrade on a “research” tree with points gained in battle, it automatically applied to all the units, present and future.

Is there a difference between an Assault Marine unit that followed you since the first mission, and the one you took aboard for the last one? Well, the former has all the missions it was on marked with purity seals on the army roster, but they’re otherwise identical. So much so that the game sometimes deletes unit already in the army to make place for ones you earned during a mission.

Another thing is unit balance. It may not matter as much in multiplayer, but it kinda blows when an Exocrine one-shots a unit during the campaign. Marines usually have the health to withstand it, but SoBs don’t. Neither is it great when Tyranid Primes can get a free boosted attack if they kill a squad member in melee (luckily, this doesn’t chain).

Meanwhile, in skirmish (and I guess multiplayer), there’s very little stopping you from taking an army of 14 Tyranofexes that will demolish any opposing combined arms force. They can’t stop you from taking 14 Hellblasters either, which will wipe out 14 Tyranofexes without losing a single Marine. I swear, army composition limitations is one of the greatest tools in limiting nonsense in Warhammer, and it’s something designers love to ignore.

Is your nerd clearance level high enough for this?

But those are all complaints everyone can understand. Let’s get a bit JcDent, a bit esoteric. Let’s talk about unit composition. Now, while each member of a unit has their own HP track, their own attacks, and is targeted randomly among the group, they’re all identical.

This may fly for Primaris, who love (or at least initially loved) mono-weapon squads, but it’s not great for anyone else. The units don’t even get a sarge or another unit champion equivalent. Sure, this may be a standard TBS practice, and maybe coding only one dude in squad to have a flamethrower is really super hard, but it doesn’t feel great.

You know what takes it all to another level? Ranged units absolutely refusing to partake in melee. Yes, this is another TBS standard, and Sanctus Reach is also guilty of this sin. It’s especially egregious in a Space Marine game, since Marines are meant to be experts of all combat. It just doesn’t do that Intercessors can’t charge some Gaunts, or that their counter attack deals 4 (read: woefully little) damage.

What’s even worse is that Warhammer 40,000: Battlesector gives us Blood Angels, one of the most melee oriented First Founding Chapters. Every last one of them is constantly fighting the urge to tear enemy limb from bloody limb. But no, aside from heroes and dreads, only Aggressors like to spice up their slaughter life.

But back to the good stuff. When it comes to the audio and the visual, Warhammer 40,000: Battlesector isn’t a slouch. While zooming in on Carleon does show how funky the proportion GW gave Small Marines are, it’s not the game devs’ fault. For their part, they put in a lot of effort to make fights on sometimes-spare environments of Baal Secundus look good, from gun flashes to textures to animations.

The audio is great as well, not only for the fully voiced dialogues and monologues, but also the unit barks as well. Unit barks is a block many a smaller game developer (and Creative Assembly) stumbles over, but Warhammer 40,000: Battlesector has ample good ones, such as Aggressors forcefully declaring “We are the walls, we are the guns!” Everything in the game sounds great!

So yeah, it took me this many words to say that Warhammer 40,000: Battlesector is a good game. It plays with TBS mechanics to force players into a certain more aggressive mode of play and I’m all for that. Shame it’s not turn-based-simultaneous-resolution like Black Lab Games’ Battlestar Galactica: Deadlock. However, if that game is anything to go for, we’re bound to get some top-tier DLCs. Orks? Imperial Guard? Both?! Who knows!