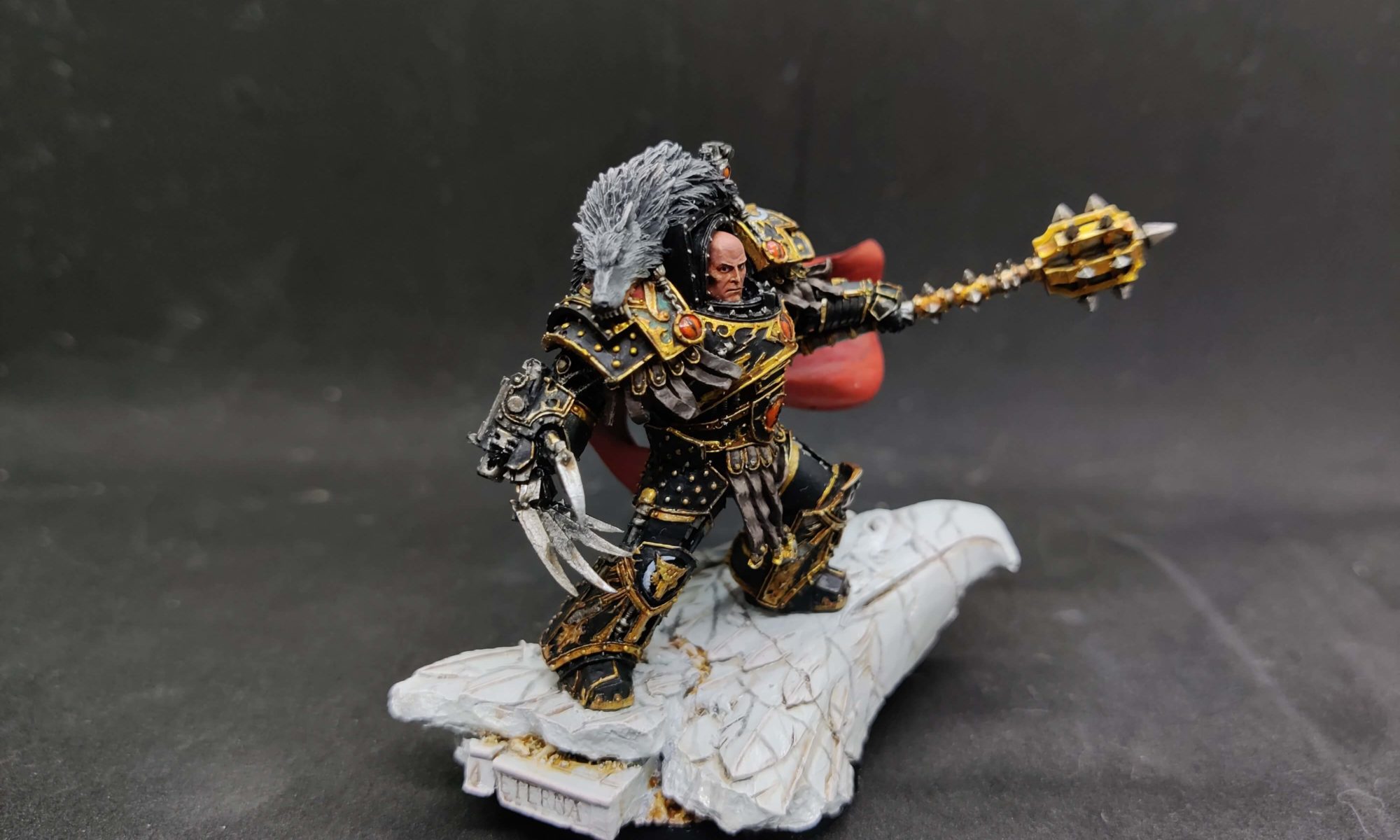 When I started this blog, I expected to do more miniature content that I ended up doing. Oh, I’m certainly playing games, painting miniatures, and doing window shopping, I’m just not used to writing about it. But whatever! I recently painted Horus Lupercal for a contest (I didn’t win), so here’s my story.

One thing you might not know about me is that I detest named characters in miniature games. Your darth vaders and rogal dorns already have their stories told in official material, there’s no place for me there – and there’s no way to make them My Dudes. So it was unlikely I would have ever bought a Primarch, especially when the Sons of Horus I’m collecting are supposed to be Loyalists.

But the goon that got me as the Secret Santa santee didn’t know this, so he got me Horus the Warmaster, Primarch of the Sons of Horus (as well as some SoH heads). Some Latvian geeks doing a painting competition and inviting Lithuanians to participate was just the justification I needed to actually get paint on the dude who decided that the demonic force that had turned a ship-full of imperial personnel and a friend commander into gross zombies was on the up-and-up when they told him that Emps is planning betrayal.

Ol’ Horus here has two scenic bases, with the smaller one seamlessly (in as much as FW can do that) slotting into the bigger one. Scenic base hater that I am (more specific JcDent brainworms), I didn’t want to do the bigger base – and I was in luck, since it would have been too big for the tournament. Huzzah!

As it’s prudent when working with non-plastics, all the parts got a soak in soapy water and some brushy brushy.

Here’s one thing you might not realize about Horus: he’s probably the easiest Primarch to paint. A black basecoat does half the work, then you do the gold, and that’s basically that.

Oh, but I had my share of indignities and displeasures. People laud resin miniatures for their greater detail, but I hate it. Not only are the details more fragile, they’re a pain to paint even with a magnifying glass. I had so many issues with trying to get the molecular boding studs coving his hips right…

This is the spot where “lack of reference” and “resin small” collide. Look at Horse‘s greaves.

Horus has some sort “one wolf stellar object” thing going there. Trouble is, the wolf, the rays, and whatever other small details are so fine, I can hardly tell which should be painted, which should be left lone, what’s a casting error, and what’s just my eyes playing tricks on it.

Resin? Almost the worst (the worst it still metal).

Of course, that wasn’t the only treason on the resin font, and I suffered trying to get the arms and the cape to stick to the body. Not the terrible sweaty resin issues a friend of mine had, but still very obnoxious.

While it’s the Talon of Horus that had a lot of tiny details going (as well as more studs), I also had an unexpected amount of trouble painting the inside of the mace head.

I also had to learn how to straighten in out using a hair dryer, which is resin.jpg. Hey, did you know that I have an unassembled Warlord Games’ Matilda, and the official answer to me complaining about bent tracks (the tank hull comes in three pieces – hull and track assemblies) is to put them into warm water and straighten it? Still haven’t gotten to that.

Painting in subassemblies was absolutely vital, as the cloak would hide a lot of the Primarch’s back, the arms would get in the way of everything… and all of it would frequently collapse because RESIN.

For the colors, I used the guide on Horus’ store entry on FW, doing the best I could with what I had. Of course, the wolf fur is the best part, because that’s where drybrush becomes cruise control for victory. The gold line on the coat… well, it was the opposite of that.

The pteruges I had to repaint, and even the final result isn’t what I want. I also had a lot of effort put into those Eyes of Horus, trying to get that orange-red gradient going, with mixed results.

For the head, I endeavored to do eyes (never do eyes if you can get away with it) and it got so bad, I had to give it a bath. And what do you know, resin isn’t a fan of isopropyl. My official “hates isopropyl” ranking is this:

Luckily, no major damage was done to the head and my second attempt was a smashing success (at least for me).

When it came time to paint the base, well, I went in a for Duncan tutorial since I had some luck replicating his GW-era scheme for Blackstone Fortress bases. Did I succeed? 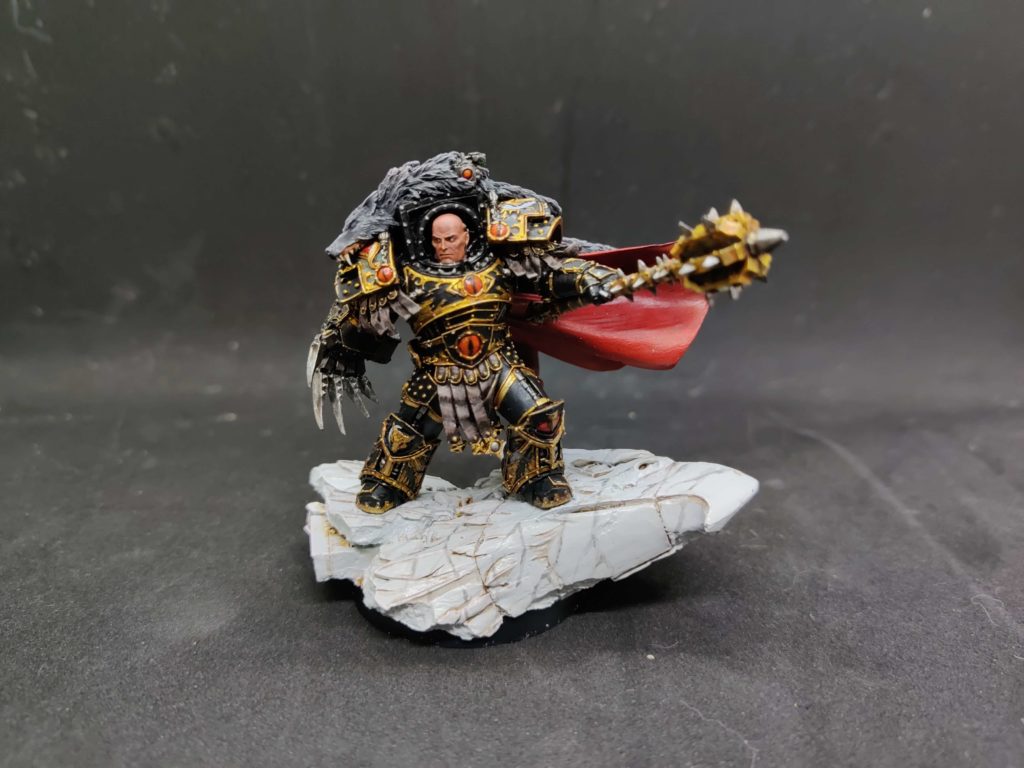 No, I did not, the marble looks like someone drew some lines on a stone with a brush. The base is a mess in general, and I’ll have to re-do the small rubble piles eventually.

So, painting Horus wasn’t as bad as I expected, and I managed it all within a month. Will I do this again? Highly unlikely. All the other Primarchs seem a lot harder to paint, my main 30K army is Definitely Loyalist Death Guard, Mort’s a shit, fuck that. Also, this now gives me loicense to get traitor SoH chars, I guess.

*glances over at the Pile of Potential*

Not any time soon!