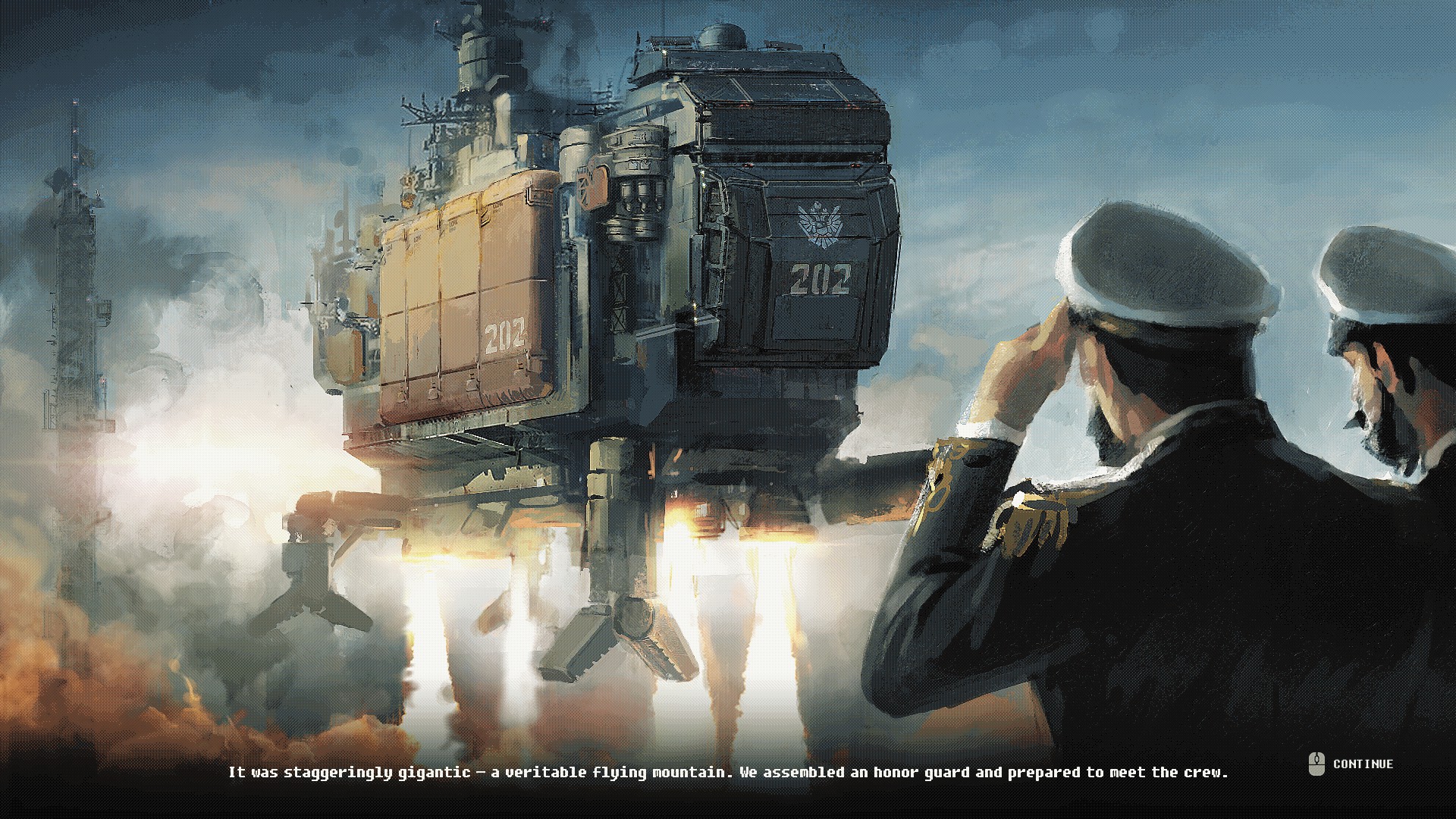 At first, I wasn’t at all excited about the revival of MicroProse. Then I heard they’d be publishing Second Front and Regiments. Now, I’m reviewing HighFleet, and you know what? That’s a good game right there.

HighFleet takes place on Erat, a post apocalyptic Earth. Nobody knows when or how the Calamity happened, and there are more important matters to care about besides. Romani Empire (maybe some relation?), the most powerful state on Erat, is under attack from the Gathering, a noble rebellion in the recently absorbed Kingdom of Gerat. Surprisingly, it can more than match the imperial state in airpower. So the task that befalls you, a tarkhan (captain) of the High Fleet and scion to the House Sayedi, isn’t an easy one: to cross all the way through Gerat and capture the rebel capital of Khiva of bring them to the negotiations table.

Flying patrols on the northern frontier

It’s fascinating, really, the atmosphere and the world of this game. The Romani Empire is similar to, but not exactly the Russian Empire, especially with the decidedly non-Slavic-sounding ruling House of Sayedi. Meanwhile, the Elaim of Gerat could be inspired by all sorts of peoples subjugated during imperialist adventures in the Middle East. What matters is that theirs is a tribal society, more used to settling matters via custom and violence than the Romani.

Realize this: all of that is the background for a game about taking your fleet of giant dieselpunk airships from one end of the map to the other. While your mastery of feats of arms matters, so does your treatment of people and situations that you meet along the way. It may not be as vitally and immediately important as shooting down ships, but it’s always there.

Right, let’s talk about ship combat. In HighFleet, a ship can be something a meagre as the extremely light Courageous-class (very much a gallow’s humor name, as that ship has the absolute minimum of the stuff to keep it flying and fighting) corvette to ponderous leviathans like your flagship cruiser Sevastopol. Fighting – both with them and against them – requires constant adaptation, because they the fights play out are very much not the same..

Say you have the Lightning-class, currently my favorite small corvette. Like the Courageous, it features a rather minimalist design, with two exceptions: engines and guns. It has six engines, two of which just provide static thrust, and four maneuvering ones that make the screen darkens as the crew nearly blacks out when hurled through the sky at 1000km/h. Speed and maneuverability are all the armor the Lightning has, but if you know how to move, you can kill anyone of a similar size or smaller.

In contrast, we have the Gladiator-class. Much larger, it’s a bulbous thing, looking a lot like the iconic dropships from Battletech. It has big four guns and solid armor, and might even carry two missiles. It’s a tricky opponent to face and an easy ship to fly as long as you keep its unarmored belly safe. Unlike the Lightning, it can no-sell a direct missile hit (at least once). However, a Lightning-class ship can dash around its fire (you’ll always know when the AI will fire or where it will aim) and tear out its unprotected guts.

It’s visceral, the feeling of being a sky predator, and it’s terrifying to command something like Sevastopol, which will never dodge anything, and just trade fire while firing enormous broadsides.

Only strike from a position of strength

Still, the battles will seldom be easy. For one, you basically never know what you’ll fight until the time comes to arrange the lineup of your ships. Why the line up? Because you control a ship at a time, switching to the next in line when the first reaches the retreat zone (usually on the opposite side of entry area) or explodes. It works similarly to the enemy, only they have four ships at the same time.

Makes sense: if High Fleet gave you AI buddies, they’d just lose your precious ships to all the missiles and stray fire that loses no oomph as it crosses the entirety of the map. Make the fights 1v1 as if unto the Ur-Quan Masters, and the player will be able to easily crush many defending fleets piecemeal.

The ship lineup provides another interesting aspect of the game. Say you caught the enemy unawares by sending forth a small, fast taskforce while Sevastopol and Co. are still hundreds of kilometers away. The enemy starts parked on the ground. Does you task force include any ships with bombs? Because those are killer, but nearly unusable in aerial combat. So how about you send in the dinky corvette first, let it drop its four bomb payload and then run away before the survivors can swat it out of the sky?

We can’t stop here, this is Gerat country

But to do that, you first need to get to the enemy undetected, which means breaking off forces (at least the game prompts you to do it) before reaching the target, which means you need to select the target carefully… it’s a whole cascading mess of things, the things you do on the strategic map, and it always eats up a big share of my review space.

Because HighFleet is very lightly roguelike, it features a whole lot of strategic map work. You might not think that way, seeing how the cities on the map are connected by routes as if they were a system map in FTL. But it’s not. You have total freedom to fly wherever your fuel takes you. The routes just show where you’re likely to run into a merchant or a strike force – the first are to be hunted, the later avoided.

Radar contacts, IRST imaging, ground radar, fuel management, ELINT warnings, radio message interception and decoding, rescuing and looting downed ships, asking other characters for help, all that and more happens on the campaign map. You’d almost think that battles would play second fiddle to all this, but they don’t – especially since you can’t auto resolve them.

Seriously, I could go deep into the weeds of strategic map shenanigans, but I leave you with two bits of advice instead: ditch the nukes for conventionally tipped cruise missiles at the start, and know that radar contacts moving above or below 150km/h are trouble.

But imagine you avoided all of that and landed in a city, something at least a single ship of yours has to do physically (and under your control) to interact. There, you can repair and modify ships, buy fuel and special ammo supplies, hire new ships, and take on text adventures. They’re often short dialogues (long ones are for the main questline), and they usually only impact your morality scales.

Oh, morality scales. As you collect points, they rise (or fall) in level. But if you level up a scale, your crew suddenly starts expecting you to act that way. Did you get the early game boost to Faith 1? Great, now you have to fall on the side of faith – your crew might lose morale if you don’t choose the right option (at least this is always explicitly detailed). Another thing about those scales? They can act as skills for skill checks in the more important points of the story.

All of that – everything I mentioned or forgot – is rendered beautifully. The interface is gorgeous: a very tactile imagining of everything you do as buttons and switches on a dieselpunk interface. When you go into combat, much of it is replaced by those neon-green graphics you’d expect on a fighter jet HUD.

Oh, and the character art, and the pieces of documents you find, and the ships, and!..

Oh, the ships.  HighFleet ships might not look too different from a game where they’d be just a sprite and health bar, but in truth, they’re a collection of components, each of which can be damaged and blasted away in the fight. All of that looks super good. Ah, the sheer excitiement of seeing enemy craft reduced to so much scrap!

The audio part holds up as well. There are a lot of sounds for button mashing and flipping switches, and so on, and so forth. No voice acted dialogue that I’d remember, but a lot of chatter and verbal warnings both in combat and when landing a ship, which it makes it all feel a lot more alive.

HighFleet is a stupendous game. There is a lot of depth to it – some of which is only explained in the manual, boo – and somehow haven’t managed to write a review of it shorter than two pages. I even skipped parts like ship design and character interactions this time! Christ, what a game.