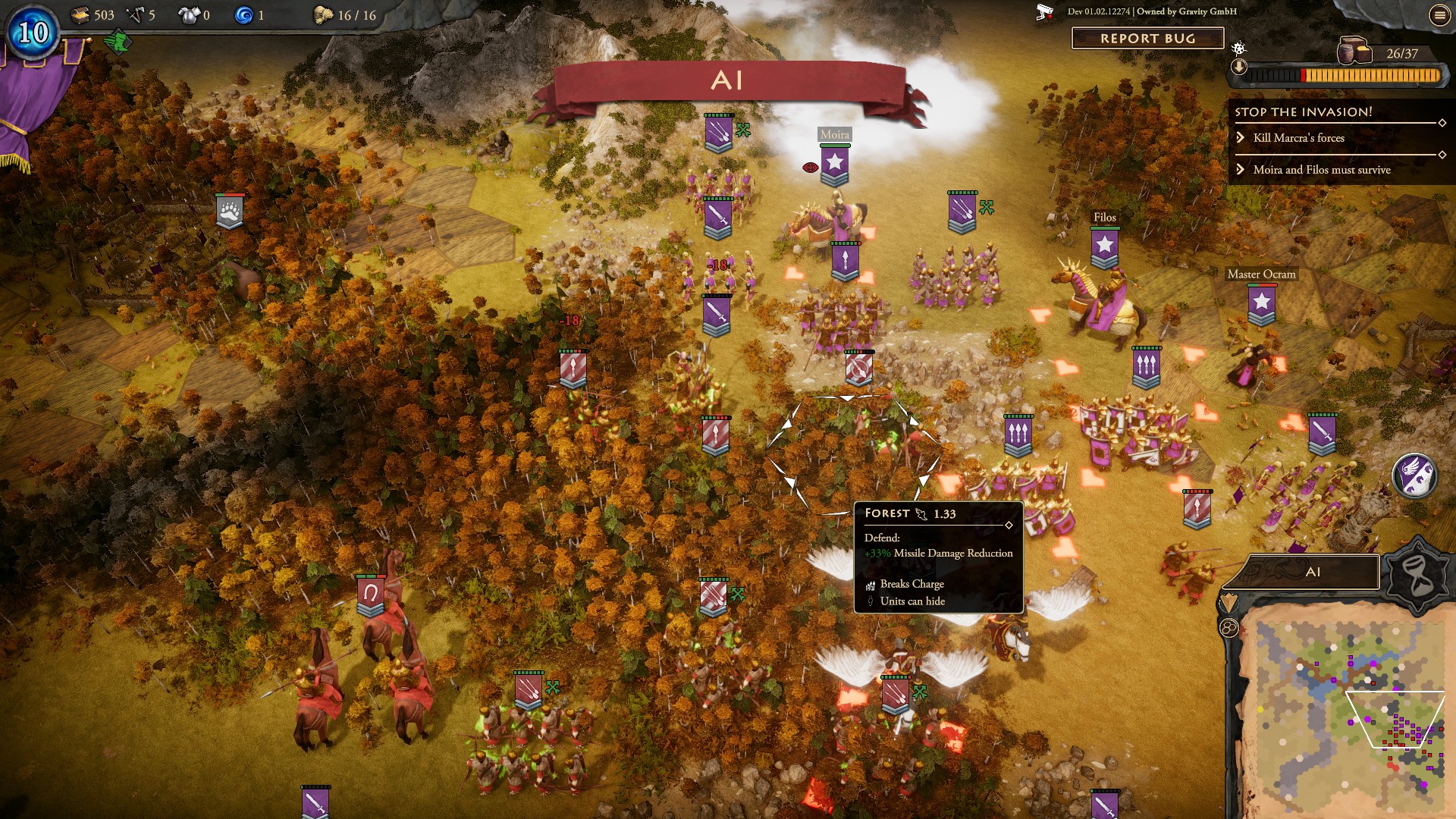 The Empire has fallen! Or, rather, the Emperor was overthrown and killed by a coalition of barbarians and locals who saw how the forces of darkness were using the Empire. In the province of Synor, a young Transmuter (necromancer wizard) Moira returns to serve her uncle the governor and aid Filos, an arrogant ground commander she knows from her childhood. What starts as regular military operations to keep the province under control quickly turns into something larger – and more meaningful.

Empire in Flames is a new campaign that picks up shortly after the end of the original one. And it’s a true story campaign, unlike the curious excursion we had in Onslaught. This time, you’re controlling the fantasy Roman forces of the Empire from the word “veni.” And you’ll get to pit them against all of the greatest hits from the game.

The Empire plays a lot differently from the barbarians, focusing on defensive infantry, strong cavalry, and lots of skeletons. Moira is a Transmuter, and so is Master Ocram serving with her. Together, they spend the mana supply to drown the enemy under an endless tide of unshakeable and immediately replaceable reinforcements.

Seriously, it’s kinda obvious how much the campaign in Empire in Flames is balanced around summoning skeletons and zombies for days. On a map where you can capture mana fonts (mana doesn’t regenerate normally in the game) and have few magical enemies (magical weapons do great damage against the undead), you can grind any sort of resistance down via wave after wave of Transmuted.

Conversely, there are missions where you start without mana and have little chance of replenishment. These are the ones you should save the mana potions you find early on. Trust me, you’ll need them just like you’ll need troops with magic weapons.

On the other hand, Empire in Flames makes it easy to quickly upgrade units. Having early access to cavalry with flying units coming in shortly after, you’ll be able to zoom around the map cleaning out ruins and caves. This is important to do because once the wealth meter runs out for the maps, the ruins mysteriously lose their loot as well.

At the same time, you’ll have a lot of missions with many opportunities for capturing towns. And the wealth meters in Empire in Flames are generous more often than not. Combine this material wealth with ample campaign merchants (and the ability to hire 4 mercenary units per mission), and you’ll be able to expand your army, tech it up, and even have funds left over for replacements.

Well, if you allow yourself to take loses instead of heeding the loading screen advice to save often.

This bounty seems like a new thing in the Empire in Flames campaign when compared to what we had in Invasions. Maybe the developers decided that this would please the players a lot more (and it does). Maybe it’s a meta commentary on how rich the lands of the Empire are compared to barbarian north. Or maybe it’s just me getting more experience with the game and being bet- naw, that can’t be.

Wait, so what I do on the battlefield matters?!

What remains stable is Fantasy General II’s predilection for in-mission dialogue choices impacting your game down the line. This was fascinating in the main game and it is fascinating now.

However, one thing sours this impression. The description of the DLC mentions how you will be able to choose between good and evil to determine the development of the campaign… but it’s all handled very badly.

There’s about as much grace in this decision as with Deus Ex: Human Revolution or Mass Effect 3 giving you buttons to choose your ending. It’s not exactly the same as in those two titles, but it still is an obvious missed opportunity to make your choices really matter.

All things considered, Fantasy General II: Empire in Flames DLC is good. Sure, you might say that not giving you new units or an entire new faction to play is just More of The Same. But this is Fantasy General II, so even The Same is really quite good. Now, to wait for the DLC that will introduce an extraplanar invasion by orcs, elves, or Anabaptists…