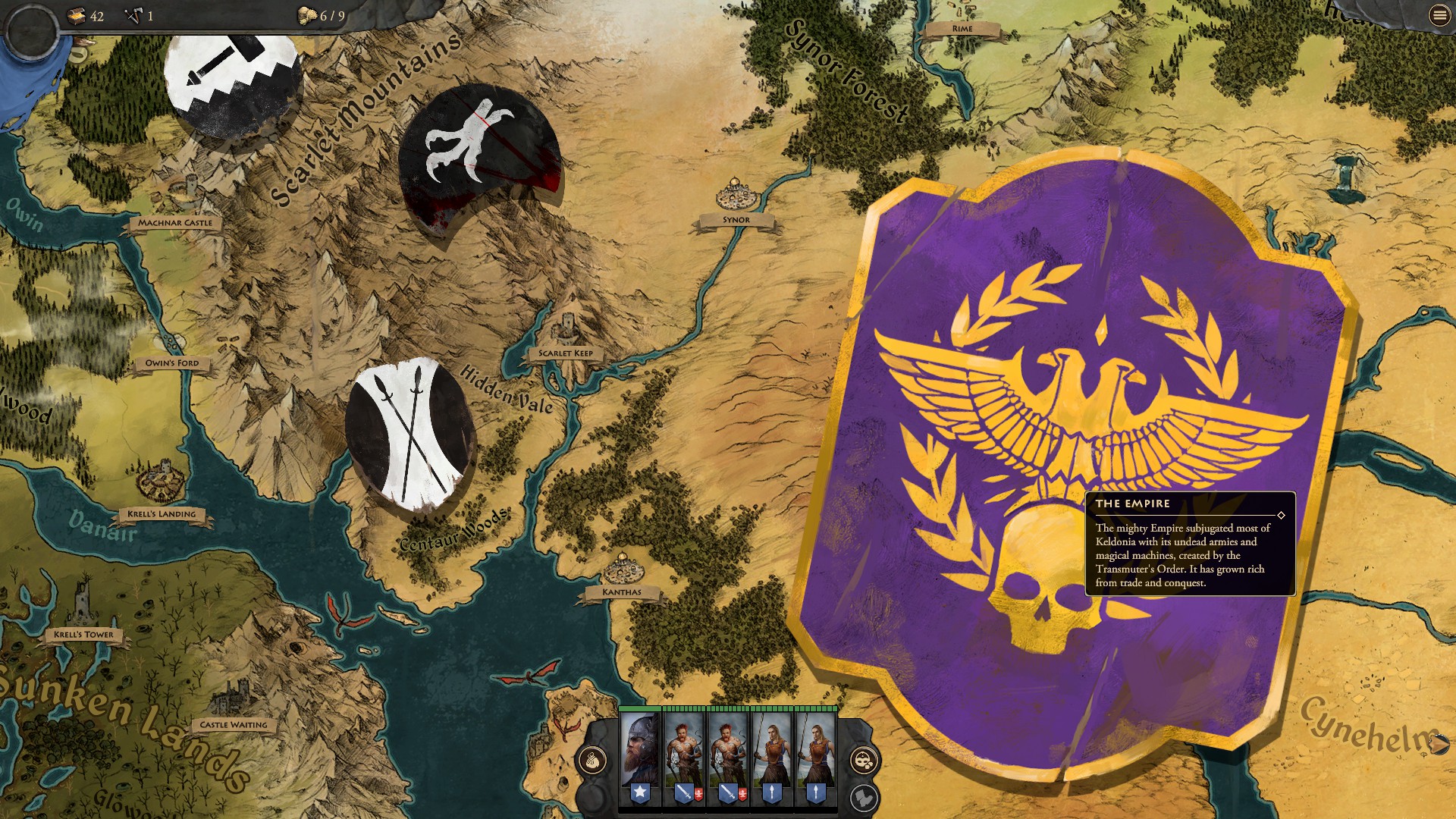 Set 300 years after the Shadow Wars of Fantasy General, it takes us back to the continent of Keldonia on the world of Aer. The world has rebuilt after the devastation that follows apocalyptic fantasy conflicts. However, your Barbarian clans in the land of Fareach (get it? “Far reach”?) are still disunited and stinging from having been defeated by the Empire some time ago. Your clan is lead by Faliir One-Eye and you’re his son. And strife is creeping back into your lands…

That is the story that will take you through the 30+ scenario campaign. Do take a moment to let that number sink in. 30 scenarios. What AAA game – past StarCraft II, I guess – these days puts that amount of effort into the single-player campaign? Fantasy General II does. And boy is that a sight for sore eyes.

The campaign is split between the scenarios and the campaign map. The latter doesn’t burden you with excessive choice; you usually go from scenario to scenario. What you actually do here is talk to people, reinforce your army with additional troops and upgrade the ones in your permanent force. There’s a unit upgrade tree and new tiers are bought via a combination of money (the influx of which you can sorta control) and gear (which is almost entirely out of your hands).

Once in a scenario, you’ll have your full permanent army and potentially some “mercenary” units, which is a catch-all term whatever dudes that joined you temporarily. You then engage in turn-based hex-grid exploration and combat. However, this is Fantasy General II, so actual meaningful dialogue and choices occur during the missions as well as in the campaign map intermissions. Neat!

With a little help from a barbarian friend

Your units aren’t overburdened with stats and most of their flavor comes from the abilities that they have. For example, early/low level Barbarian infantry have charge bonuses and are better at ambushing units out of a forest. Barbarian slingers can do rection fire – shoot at enemy units who dare to attack their friends while being withing firing range – but they can do so infinitely if they’re standing on rocky terrain. And that’s just something that happens with your lowest troopers – things can get a lot wilder in higher tiers.

Each unit in the game has two actions in can do per turn – one move, one attack. Certain abilities may require to spend one (or both) of those actions to activate. Units that survive a melee attack will strike back – and you’ll always know the estimates of damage and casualties. By the way, blundering into an enemy that was invisible to your troop (due to forests or whatever) usually results in a nasty ambush attack.

I take all your (slingshot) bullets!

When it comes to damage, Fantasy General II takes a page out of Ancestors Legacy’s book here (actually it’s the other way around since the system was present in the first game): your unit has a health bar, but the pips represent the injury level of individual soldiers (sorta). There are abilities that prevent soldiers from dying, so you can have savagely wounded-yet-intact squads milling around, waiting for that 1HP damage to kill them all off.

You avoid that by spending a unit’s turn resting. If they don’t get attacked, they’re fully healed. However, dead soldiers don’t regenerate, which places an emphasis on keeping them alive to have a unit at full functionality. So the frontline sees a deadly dance of trying to pull troops off the line to replace with rested ones. This is doubly important, as units gain experience, and replacing lost soldiers at the end of the battle costs money – unless you do it for free, which results in XP loss that can drop levels.

However, the campaign system works against the endless waltz of resting troops. Each scenario has a loot bar. The longer you spend in the mission, the more depleted it gets, signifying the region being devastated/abandoned by people who don’t want to be barbarian’d. The lower the bar, the less stuff you get from burning villages (you are a fantasy Viking after all).

If it runs out, you will not get a bonus at the end of the mission, nor will you find loot in caves and towns you burn. It hurts immersion a little – what, did the goods in this burial mound just move out – but it does prevent you from doing the Homeworld thing of prolonging the mission to get all the loot.

And there’s a lot of loot to get, from money and gear (remember the upgrades?) to magical items and permanent buffs to the associated unit. So these mechanics put you at cross purposes: you want to husband your army and keep it safe and healthy, but you also want to collect the funds and materials needed to expand it.

Therefore, you’ll want to put your heroes in harm’s way more often. Sure, them dying spells the end of the mission, but the loss of permanent units can death-spiral you anyways, so you’re not losing much by reloading. Heroes, who gain levels and are upgraded with abilities, don’t have soldiers that can die on them, so they can always heal fully. They also have a lot of useful boost and passive auras, so you’ll want them in the thick it anyways.

It’s basically the same as using your hero units – usually gifted with regenerating health – in RTS games that throw you into missions where you don’t have a base/can’t reinforce.

However, Fantasy General II wouldn’t be me so General-ish if flanking and morale didn’t exist. You probably understand how flanking works anyways, but having morale in the game is great. A low morale unit – due to being mauled or seeing their friends get cut up – is not only less effective, but also more susceptible to magic attacks. A broken unit flees and has to regroup. Avoid those things by taking troops off the line and letting them rest.

Incidentally, undead units don’t have morale. Thus they’re considered to be low-morale where damage is concerned. So you can’t break them, but you can break them.

Most of that stuff applies to the skirmish mode as well. You start by assembling an army much like in a Total War skirmish match, buying units, paying for their levels of experience, and such. You select a battlefield and duke it out. You still want to take cities and settlements (to buy new units, to replenish your troops, to burn them for money), but you don’t really need to care about the campaign mechanics.

Buying yourself an army

Currently, the game has over 70 units between the Barbarians, the Empire and a smattering of neutral units. You will notice that different tiers of units are just better versions/upgrades of previous ones. This is even reflected in unit card art, which maintains the same pose of the soldier, yet adds more stuff. It’s a clever way to integrate battle mechanics and campaign advancement.

Barbarian units are… barbarian. They’re fast, they can exploit the forests, and they’re good on the charge. When they die, they give up mana (which is a pooled resource that doesn’t regenerate unless you hold special sites on the map) to their army, which is more important in skirmish than in the campaign. Their heavy hitter siege units are actually allied trolls – which do feature regeneration.

Meanwhile, the Empire is fantasy Rome… but with a Dominions twist and some Greek/Persian stylings. The former comes from the fact that the Empire makes heavy use of the undead, to the point where fluff describes their cities built with undead labor. For the latter, their melee infantry is mostly heavily armored, shield-bearing dudes that fight in a pike phalanx. They are backed by archers, which makes them very good in defensive play. They also have a couple of dirt-cheap undead units which are literally cannon fodder. Their siege engines are actual fantasy engines.

And the minor details

All in all, the factions have strong identities and the way the game is set up makes it more than welcoming for DLCs, at least in my opinion. Also, since the full title is “Fantasy General II – Invasion”, I have little doubt that there are plans for expansions titled something like “Aftermath” or “Peace”.

And the game looks good as well! Sure, it’s not exactly an AAA product, but the developers of Fantasy General II know how to use the engine well and I haven’t had the slightest moment of disappointment. The 2D used for unit cards is superb, and so is the campaign map.

Fantasy General II is the best thing to have come out of the Panzer General-inspired mire. That’s right, come at me, bros. The gameplay fits the fantasy aesthetics, every decision done in crafting combat and factions goes towards a greater whole and such massive dedication to the single-player cannot be unremarked upon.