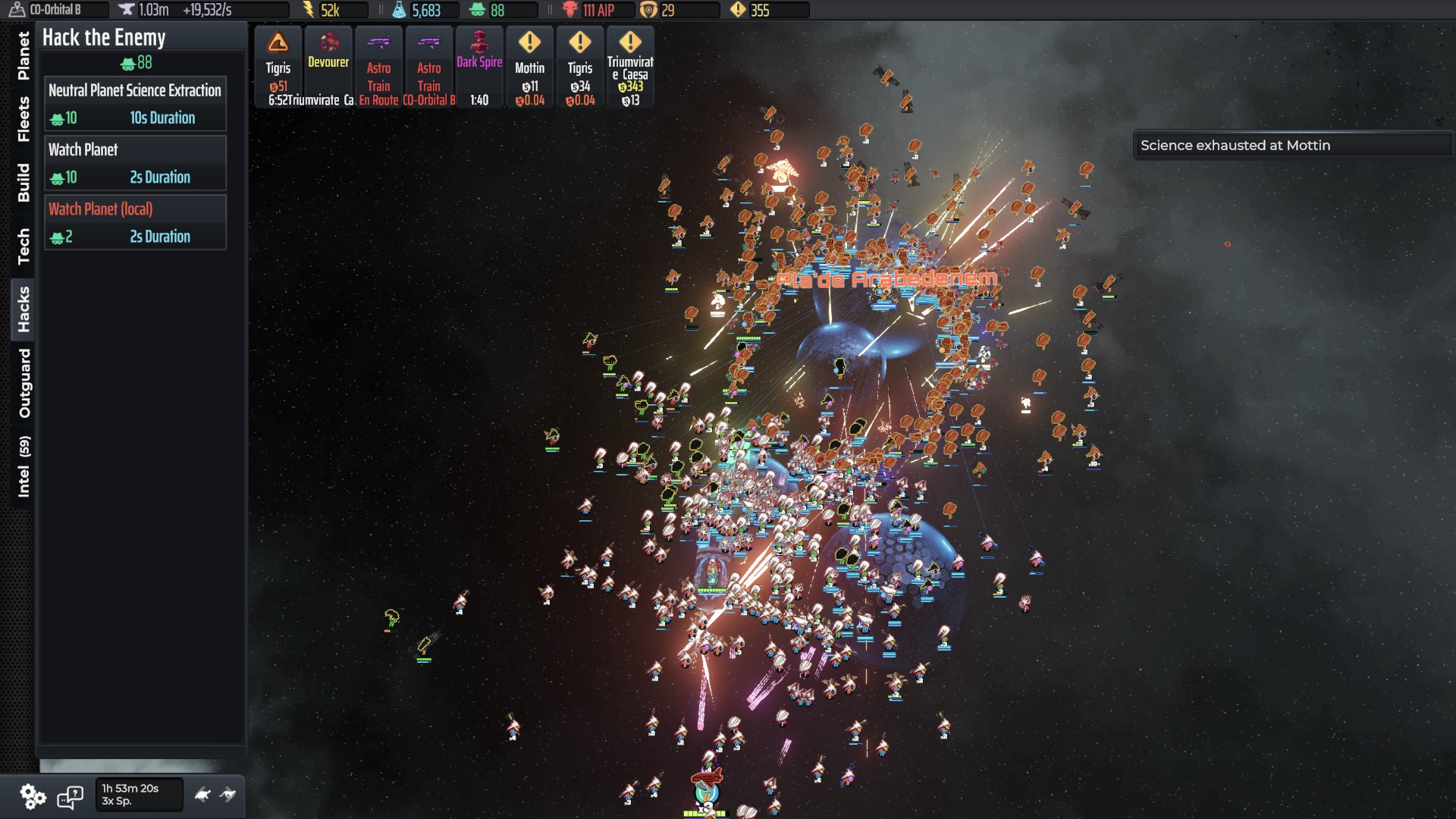 AI War is one of those games that look intimidating. Well, fortunately for you, I’m here to tell you that it really isn’t. Sure, you might claim that I’m a veteran RTS gamer, but that’s furthest from the truth: I may have a played a lot of them, but I was never really good. So believe me when I say that AI War 2 is easy to learn, hard to master.

AI War is a game about you fighting the forces of a malevolent AI. It has already won: it controls the galaxy, most humans are dead, and it’s unfeeling forces are now battling whatever challenges are to be found in extragalactic space. You are the commander of one of the last human enclaves. It is your duty to strike back at the AI, avoid the backlash, and eventually win. Hopefully, anyways.

Some of your base may belong to us

Much like in another prominent space RTS, Sins of a Solar Empire, the map is divided into a bunch of planetary gravity wells, connected by warplanes. The gravity well is where you build your defenses and infrastructure.

Yes, AI War II is not very keen on your developing factories and research facilities. There’s only one resource extraction building you’ll place manually, and that’s when you want to convert excess metal into power (those two being the resources involved in building and running both your fleets and your empire). The game is more interested in how you’ll place a whole bunch of turrets, tractor beams, minefields and other defensive emplacements which turn the task of defending a planet in AI War 2 into an experience not too different from a tower defense game.

Granted, space doesn’t have tunnels nor paths, so the AI forces entering the system will likely just beeline to their goal – your station, another wormhole and the like – but you can your fortifications to at least thin the herd if not stop it in its tracks. You can be certain that AI won’t be engaging in such creative defensive construction, relying instead on the inherent toughness of their own designs, the local forces, and the fact that AI doesn’t care about the economy at all.

Do not tempt fate

You see, you’re a human rebel trying to feed metal and power into automated factories as fast as you can. The AI doesn’t have to worry about that; it has already won. It can whip up new forces easily; luckily for you, it doesn’t care. So your task is to grow big without antagonizing the AI too much and then slay it before it can react.

You will know how much you ticked off the AI overlord by watching the AI Progress tracker – the AIP. Most usually, it will go up when you destroy the AI station holding a planet and the warp gate that floats next to it. There are other ways for it to happen – destroying certain structures, letting other structures live and so on – but these are the main ones. AIP motivates the AI to use ever more sophisticated defenses and retaliatory measures against you, so preventing it (and even decreasing it) is always important.

This way AI War 2 avoids becoming just another steamrolling, map painting game. The AI might be losing planets, but it doesn’t care. The AI is able to raise out of these stones the forces to crush you – and it will if you anger it enough. That’s why you have to be shrewd in your conquests. Only take the planets you need. Raid systems to gank warp gates that spawn waves aimed at your territory. Don’t be afraid to have a scattered realm!

This is especially true since, as I mentioned, AI War 2 doesn’t care at all about regular drill of building up bases, doing research, then building up new bases. And you don’t really order new ships yourself – and that is the biggest change between the game as it is and the early access version I played in 2018.

Your fleet composition is determined solely by what squadrons a flagship has assigned to it. You barely have any say in it – you can only build squadron-less flagships yourself. What you need to do is get out there and reactivate other flagships, which will then populate their own fleets with whatever squadrons the RNG blessed them with. Sure, you can swap squadrons between fleets, but you are at the mercy of what you find. And you don’t have to manually reinforce the fleets! As long as a factory is in range, it will produce new ships to replace the losses. Those ships will appear out of the flagship.

I had to order ships in the Early Access preview, which was a pointless step of busywork, as you wanted to have all of them all the time. Meanwhile, now you’re just throwing fleets around. What’s more, all flagships – from your regular unarmed ones to Arks and such – can carry their entire fleet inside them. Loading and unloading is done via a single hotkey press – and the ships move 3x faster when ordered to load up to flagship.

What this means is that you don’t have to worry about your fleet spreading out while going places – or moving at the speed of its slowest member. Nay, in AI War II, you fleets can zip around almost instantly, just load-and-unload them. This one of your unspoken advantages against the AI, as its fleets usually suffer from spreading out and having to fight everything along the way to the destination.

But AI isn’t the only thing among the stars! Depending on your scenario (or custom game) settings, you may be facing two or more AIs with very different play styles, you may be aided by human resistance fighters (legally distinct from Outgroups, which are mercenaries), possibly hampered by marauders (another kind of humans – they attack weak systems with hope of capturing), and… really basically anything can happened when you encounter macrophages, Golems, Dark Spire and more.

Space: uglier than you remember

Too bad it all looks quite bad. The decision to go 3D with AI War 2 makes little sense and brings no benefits. With SPAZ 2, it was sorta necessary for the new kind of gameplay they went with. But AI War II gains nothing from going 3D – it still controls much like the first game. The models are all boring, so you’re not even running into designs that may become iconic one day.

The music isn’t that great either. The piano scores get on one’s nerves like nobody’s business, so it’s easier to just turn it off entirely. In any case, you’ll have enough background noise from whatever action is taking place in the game. And while most of the non-musical parts of the audio experience are OK, the same can’t be said about the voice acting. The female announcer is doing her job well, but the digitally distorted AI taunts get boring really fast while unit barks can’t even decide on the tone they’re going for.

Overall, AI War 2 is a marked improvement over the first title. It’s not often that you meet a grog game that spares any thought for playability and user experience. AI War 2 does. Shame about the 3D though.