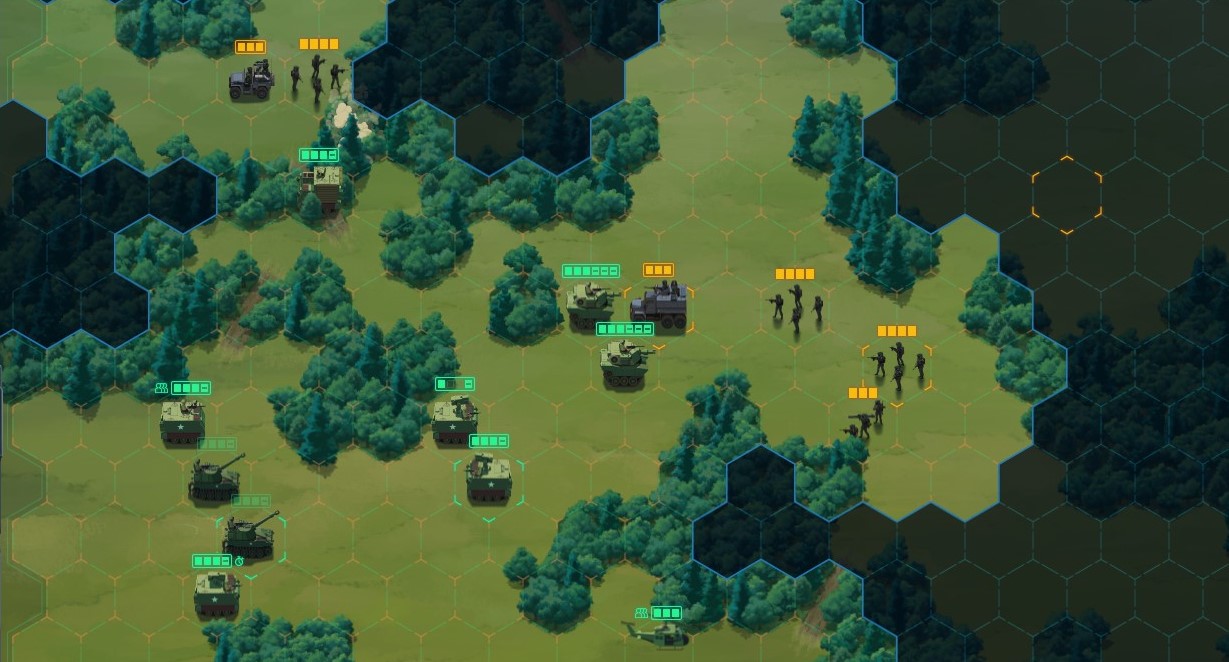 Zachtronics makes open-ended puzzle games that may involve programming, visual or otherwise. That’s the reason why I never played any of them – I just can’t see myself writing any code for fun.  I also couldn’t see myself playing an Advance Wars-like game. Yet these mad lads somehow made me do it with Möbius Front ’83.

This is a game about Cold War going hot. But since it’s a Zachtronics game, it’s not about brave NATO soldiers fending off the ASIATIC HORDES pouring in through the Fulda Gap. No, in Möbius Front ’83, the enemy is invading the American heartland. Through quantum gates. And it’s not Soviets – it’s the USA, but from an alternate dimension. How do you like them apples?!

Actually, I like them quite a lot. Möbius Front ’83 makes Advance Wars feel almost verisimilitudinous – a strange thing to say about a title where a unit will have no more than four abilities, moving being one of them. In fact, the game cribs more good wargame design decisions that most new grog releases. I loved it from the first time I launched it.

But let’s get to the meat and potatoes of the game. Möbius Front ’83 is a turn based game where you’ll be moving your infantry fireteams and individual vehicles on a hex-grid map. You do your turn, the enemy does his, simple stuff. The troops can all move or fire, except for some weapons who allow moving and then firing at lower potential damage. Since most weapons autohit, damage variation will the main source of randomness in the game.

Boy, I don’t think I have the dictionary to describe the feeling of elegance that comes looking at the systems in play. For example, how do you prevent tanks from using their 2-6 damage HEAT-firing cannons from deleting one 4 HP infantry team per turn? You make it so the guns can only target vehicles. How do you prevent infantry from using their 1 damage rifles from treating an M60 Patton to a death of thousand cuts? You give armored vehicles special “armored” HP points that regenerate instantly.

I just can’t. It so… beautiful. Sure, it leads to strange edge cases where artillery can’t hurt anything tougher than a truck (even M113s have a single armored point and three regular), but that’s to prevent you from plinking away tanks without any risk. But then it also adds verisimilitude in such cases like infantry combat: most can’t fire after they move and rifle range is just one tile. So if the defender is going to fire first, you need to bring in at least two teams at the same time to not lose. Guess what: the common military wisdom is that you want to outnumber the enemy 2:1 if not 3:1 on the attack! It works!

It’s brilliant in every way! For example, in Wargame and the like, infantry should stick to forests and buildings for protection. But tanks can still see them from afar and blast them before getting into the range of infantry AT guns. Not so here, where you need to be nest to the forest hex to shoot. And what’s this? Even a humble infantry team is hauling around 2-4 damage LAWs!

Blitzkrieg on the Möbius Front ’83

That is not to say that Möbius Front ’83  is entirely perfect. Helicopters are an issue, especially since they can fire ATGMs from the other side of forest tiles (no vehicles, not even flying ones, can enter them). The dedicated anti-air vehicles – even Chaparrals – can’t fire over trees. It may be simulating pop-up attacks  or flying nap-of-the-earth, but what it also means that you’ll be taking more helicopters down with MGs on tanks and M113s than with dedicated assets.

On the other hand, maybe those AAA guns are acting as prevention? Because Möbius Front ’83 AI isn’t stupid. If it can, it won’t ride into the range of your guns without being able to fire on you. You’ll see this plenty of times with vehicles that stop one hex away from your TOW range to rush in the next turn and potentially destroy the M901.

This also allows you check-mate the enemy at times as AI doesn’t feel like rushing assets who can’t do anything into certain death. It certainly isn’t some puzzle game hard-lock win condition and the enemy tanks are immune to that, but it is still works sometimes.

No going to battle straight from the assembly line

This works splendidly with the fact that you can’t produce new units in the game. No grabbing factories and churning out tanks on the go. No, in Möbius Front ’83, you have reinforcement phases, starting with the first turn, and then getting two more after 5 and 10 turns respectively.

Each phase gives you a set amount of points to spend buying units from your mission’s unit pool. That’s right, you won’t always have access to your full arsenal, and the biggest toys may be limited by both the number of call ins and phase availability. Purchased units arrive close to your deployment area and that’s their move for the turn.

You’ll know precisely how many points both you and the enemy have, but not his deployment zones (they can surprise you) or his arsenal. And as missions aren’t timed, enemy reinforcement phases act like a sort of soft countdown for you. Will you be able to grab the objectives before the enemy reinforcements hit?

This is a big part of Möbius Front ’83’s open-ended puzzle designs, I feel. There’s more than one way to kill an alternate American, though some solutions will be more practical than others. For example, if the mission doesn’t give you tanks on Phase 1, you’ll probably play defensively until you get them.

In any case, what lends Möbius Front ’83 a bigger puzzle feel is that you’re not incentivized to keep your pixeltruppen alive (except for my internal obligation, which would make me a terrible general IRL) – you need to win. There’s no score at the end of the mission, neither for survivors no enemies destroyed. So you can feel tempted to use softskin transports as expendable scouts or just go for a hail-Mary pass to grab that last objective.

To keep this from turning into a grindfest not seen since the days of Total Annihilation are the short cutscenes giving World in Conflict-like slices of soldier life. There’s also the typical Zachtronics weirdness. You can access PDFs of legitimate Cold War US Army manuals. There’s also a cribbage solitaire game using a Cold War vehicle spotting guide deck of cards.

You can also play minigame where you decode enemy transmissions by building circuits. The enemy TIS-330 programmable radio seems to have no distinct real world equivalent, but there’s a Zachtronics game with a similar name. And while other two quirky features exist purely for atmosphere, this one impacts the missions: to get a message to decode, you have to destroy the unit carrying the TIS-330.

But enough about gameplay – let’s talk about other sexy stuff. Does fighting alternate universe USA means that you’ll be fighting palette swaps of your gear? Heavens, no. With Möbius Front ’83, Zachtronics seems to have channeled my desire for a Cold War Gone Hot game where everyone’s using equipment that did not really make it into service or was overshadowed by more popular peers.

For example, the other US uses M60A2 with their weird futuristic turrets. The other designs aren’t easy to place – maybe they’re entirely fictitious. But seeing them made me immediately go “yeah, this seems like something that was left on the Cold War cutting room floor.” This gives the alternate US not only different models of vehicles, but also entirely different capabilities, like wheeled tank destroyers.

And oh my God, the art. Möbius Front ’83 art design is top-tier and I love every bit of it. I love The fact that units are meant to represent infantry teams and they have as much max HP as you can see dudes at the sprite (sadly or not, individual dudes don’t die) is lovely. Moreover, the first time I saw that there’s a specific sprite for when tanks are transporting infantry, I wrote to another reviewer working with the game to share my joy. The visuals bring me unparalleled levels of glee – to the point where I don’t want to talk about them too much so as not to spoil them.

The audio in Möbius Front ’83 is good as well, though not as great as the visuals. The soundtrack, I doubt it will have many listeners if it ever makes it on YouTube, but it doesn’t get in the way. All the smaller bits, from menu sounds to gun shots and the swooshing of ATGMs are done well. You’ll soon learn to hate the sound of spinning helicopter blades – it spells trouble.

And those cut-scenes I mentioned? Voiced, all of them. You wouldn’t expect that in a small (well, relatively speaking) game like this, but they are. And you know? They’re not that bad. The VAs are competent and you can generally learn to tell your characters apart just by the voices.

I don’t know if I played any other 2020 game that gave the first impression as Möbius Front ’83 did. Maybe it’s because I haven’t played Hades. Maybe because it’s just that damn good. Or maybe that’s due to the fact that it pays attention to all those things that seem anathema to grog games: art, presentation, user experience. Whatever the reason might be, I love Möbius Front ’83 and Zachtronics should try making more games like that.