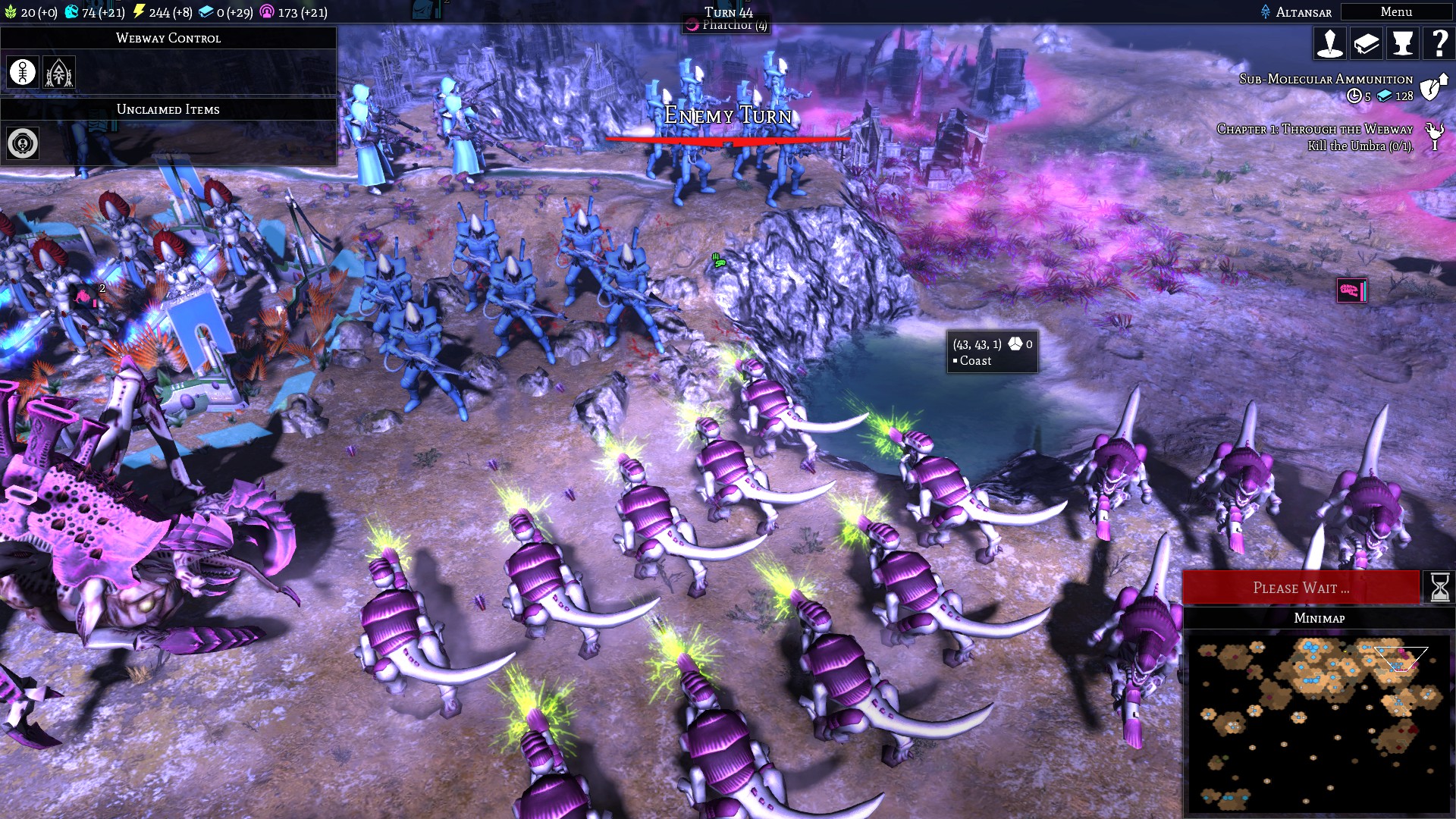 If you’re reading these lines, you probably already know what 40K is. Gladius – Relic of War is just the 4X implementation. The latest DLC has Craftworld Aeldari arrive on the besotted world. As the Farseer of <insert Cratfworld name>, you have received warnings from the custodians of the Black Library. Gladius is critically important to the Eldar race – but why? Time to dust off the old Exodite Maps app and see what lies at the other end of the Webway gate.

So the most noticeable thing about Craftworld Aeldari is that they spawn a bunch of neutral Webway gates on the game. Using their global abilities, they can claim said gates for transportation purposes, and then turn them into city centers. Oh, and you get immediate vision of every gate on the map, including knowing when one of them is under attack. That applies for dozens of gates on a huge map can make AI turns drag a little.

This also means that, as the gates get destroyed, you lose potential sites for new cities, but let’s be reasonable: this is Gladius. There’s no Civilization-like need to cover the map with endless cities. I managed to win a normal campaign with three. So the danger is there, but it’s not actually that dangerous.

On the other hand, there’s a greater motivation to keep the gates standing: mobility. Sure, it costs influence to transport a unit from one Gate to another, but it gives Craftworld Aeldari unparalleled mobility. You can shift your army to the other end of the map in moments. You can port wounded units to the safety of your capital. You can gate reinforcements in immediately, because newly-built units appear next to the city center – and that’s where the gate is.

Webway gates acting as the city base for Craftworld Aeldari actually doomed my first game. I expanded too fast and my resource extraction got crippled by loyalty penalties. And you can expand that fast, because you don’t even need to research anything: just have an owned gate and the resources to cover the cost. Next game, I was very mindful of that, and I was swimming in resources.

Elf on a wraithbone shelf

That, however, was partially helped by the Autarch. Yes, it’s the most beatstick of the three Craftworld Aeldari, but not by much. The real kicker is his ultimate skill unlock which gives you a faction-wide resource bonus. As soon as you reach that, hide him in your capital, as the Autarch is the squishiest bastard around. That’s how I tanked my economy in my second game.

The Soulseer and Farseer on a jetbitke are meant to be squishy supports, but they’re immediately a lot more useful. The Soulseer has that weird Craftworld Aeldari psychic power duality thing where they can act as buffs for you or debuffs for enemy units. The best one is, obviously, being able to heal up to 12 HP, which is most of what an Eldar infantry unit has anyways. A Soulseer also passively increases the accuracy of adjacent Wraith units, but his usefulness comes a lot sooner than you research any ghost robots.

Now, the flying Farseer is a lot more effective on the attack. Mindwar allows you to MIND CRUSH demoralized enemy units – and guess what Banshees, your dedicated melee unit, are really good at? He (or she) can also Doom enemies, increasing damage they receive, which really helps when the plot quest starts throwing at you wave after wave of beefy mobs.

Yes,  Craftworld Aeldari DLC’s quests aren’t any better than those in the base game or the other DLCs. On the other hand, it still doesn’t match the singular awfulness of the Imperial Guard one.

But back to units: I hate to use the cliché, but Eldar are often glass cannons. A leveled up Guardian or Ranger squad can put our really horrific amounts of damage, but they can also die easily. Banshees are probably the first unit that can take the punch – yes, even having in mind that you’ll already have an Autarch kicking about at that point.

The big upside is that with Craftworld Aeldari, you can shoot and then move. This aids their survivability somewhat, because even if your unit got mauled during the enemy turn, you can still fire back and then escape to safety. Dying units  also benefit you by giving you energy, but come on – that’s the least interesting/useful resource in Gladius.

There was also some noise made about Craftworld Aeldari having low population growth, but I never noticed that. Again, you don’t want to have too many cities. And you also have a city commandment to boost growth. Oh, and your unit production buildings also grant you resources. Play your cards right, and you’ll have your “dying race” cover the map with units.

So yes, just like in the days of Dawn of War, there’s some balance issues with Craftworld Aeldari, so it seems. At least they’re not tougher than Space Marines this time!

All in all, Craftworld Aeldari is a fun DLC and the writing once again delivers. More than any other DLC, it raises the question of canonicity of the stuff revealed in this game. Will it ever impact larger Warhammer 40K lore? Are the people from the studio watching the developments here? Will this be the final Gladius DLC before moving to Gladius 2? Only time will tell!