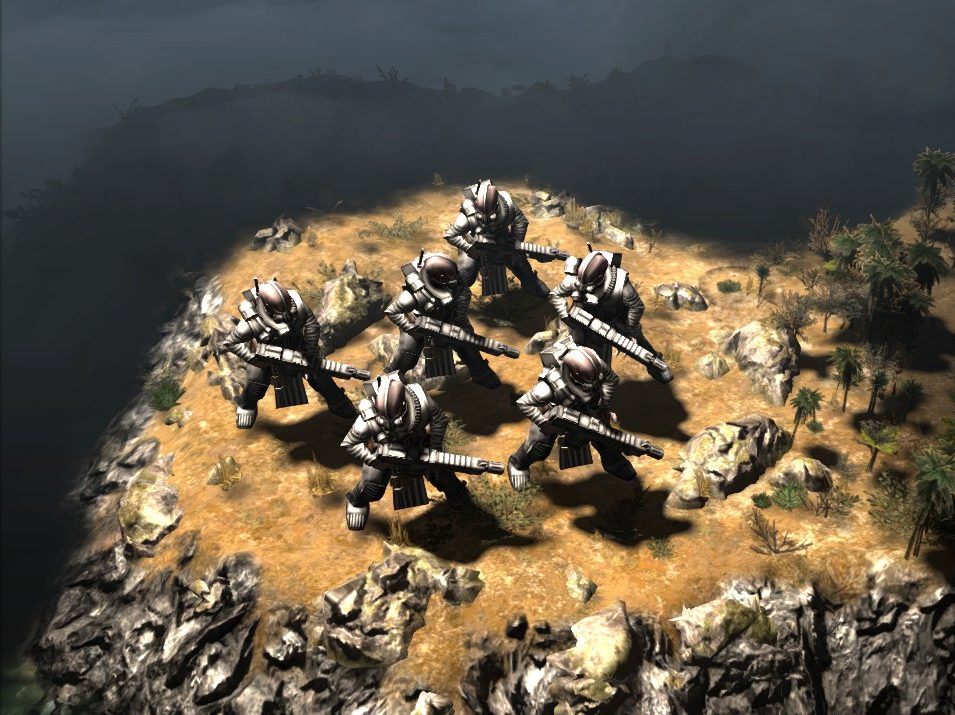 The main game is still about reclaiming the planet of Gladius after a freak warp-storm. You get to lead Space Marines, Astra Militarum, Orks or Necrons in a very 4X-y fashion. Imagine Civilization, but combat doesn’t feel like that much of a chore. And now, each faction gets a new unit to play with.

Space Marines get both the short and the long ends of the stick. Land Raider is a cool battle taxi that holds three squads and allows them to attack after disembarking, while also being quite tough and well-armed. This is big for regular Tactical Marines, a trio of which can be delivered to pester late game super units with krak and melta grenades. However, the Land Raider is at the last tier of research, so you won’t be seeing it any time soon (unless you mess with the .ini files, which I totally didn’t do, no sir).

For Astra Militarum (the Imperial Guard), you get the Tempestus Scions, the sad renaming (and up-copyrigthing) of Stormstroopers and Kasrkin. These grimdark operator troops from the most redheaded of Codex books are not that far up the research tree. It gives the Guard an infantry that moves a little easier over rough terrain, has a better gun and better armor when compared with your regular dudes. So the Scions work as a frontline unit, which allows the other Guardsmen to fire from behind them. Kinda neat.

The new Ork unit, the Flash Gitz (which I always mix up with Lootas), works the other way around: they’re meant to cover (and cower) behind the frontline. They’re an early Ork unit that gives them very much needed ranged firepower. Sure, wave after wave of boyz is good enough to swamp nearly any foe, but it would help if you were able to weaken the Enslavers before rushing them with sluggas and choppas.

For the Necrons, you get Immortals, the well known “Necron Warriors, but even more so” unit. They are armed with Tesla carbines and provide an even bigger anti-infantry threat in a somewhat more resilient package. So, in effect, they’re digital versions of the table top unit, and equally as exciting.

Now, for the new neutral unit, we get genestealer cultists. They’re a bit more survivable than your regular renegade Guardsman, having stealth buffs, but they’re not that big of a threat if you know how to deal with light infantry. Fiddling with the .ini files to give their autoguns to Guardsmen in exhange for lasguns brings some funny results.

The first Gladius DLC seems kinda… tiny. Sure, the new units are fun and patch some holes in the line up (mostly for Orks), and provide interesting options for Space Marines. Glad to see GSC’s appearing in the game, as the plastic models are some of the best in years. Now, waiting for those quest-ending battles to get balanced and for a parameter that separates unit titles from hero titles to get patched in.