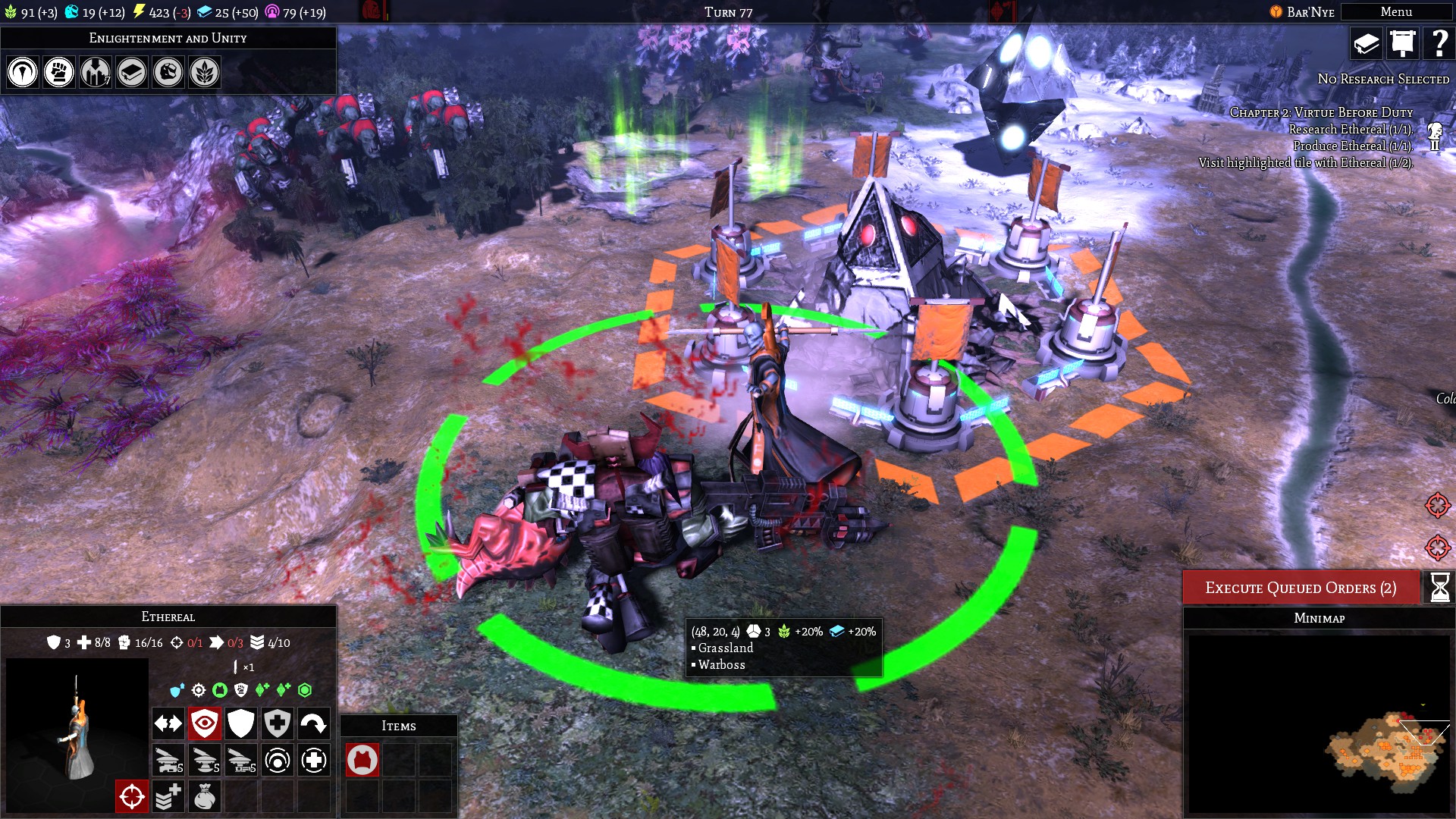 If orks are the best race in Warhammer 40,000, the Tau are the worst. Oh sure, the Tyranids have the worst fluff, but they get beat by the game balance stick fairly often. Tau, however, have little to endear them, especially when it comes to their rules and their players. So it isn’t that surprising that the T’au DLC came to Warhammer 40,000: Gladius – Relics of War so late in the cycle.

The T’au Empire, a collection of handful of worlds on the ass-end of the galaxy, is besieged from all sides. For the Imperium of Man, that’s a “business as usual” situation, but the T’au are too small to be untroubled. That’s why they and their allies launched the Fourth Sphere Expansion. It failed majestically. However, your ship was one of the few that were saved by the nascent Greater Good Warp deity. You’re now making planetfall on Gladius – plenty of time to ponder whether that counts as being “saved.”

In Gladius, the T’au build their cities and train units just like everyone else. They do benefit from greater Influence and population generation. The Tau really need that influence, since their empire abilities are entirely dependent on the stuff. With Influence, the Tau can buy any resource in the game, decrease loyalty of enemy cities and tank the morale of enemy troops, install battlesuit systems on their Crisis Suits and more. It’s a way to show how diplomatic the T’au Empire is when you’re playing a 4X game entirely devoid of diplomacy.

However, the most fun empire power is hiring auxiliaries. Your expedition doesn’t have any of it’s own – the Fourth Sphere Expansion T’au saw what Warp does to them and killed them off (though the building fluff contradicts this). But you can spend influence to convince neutral Kroot Hounds and Vespid Stingwings (introduced in the DLC) to join you.

Of course, I immediately “modded” (if some basic fucking about with the .txt files counts) for neutral Imperial Guardsmen to appear in the wild and be recruitable by T’au. Finally, the Gue’Vesa dream that has launched a thousand conversions is possible in the pixelated flesh!

Anothe important feature of the T’au gameplay in Gladius is drones. T’au love the damn things, but with the somewhat constricted and lengthy unit training times, it would be hard to put them in the game. So how is it handled? Why, nearly every T’au unit has the ability to spawn one or more types of drones. It doesn’t cost an action or resources, nor does it increase upkeep. The drones only last three turns and the ability cooldown takes ten, but they can act immediately.

This is why you hate them

This is a crucial aspect, since it allows the T’au to put more bodies in the field faster. At the most basic level, Gun drones can attack enemies or just serve as disposable scouts to soak up overwatch. However, the likes of Markerlight and Shield drones serve a utility role. More than that, all of the drone varieties serve as ablative armor for your forces. The AI loves going after them when given choice, and this saves quite a few blue lives.

And let me tell you, the T’au aren’t tough. Even the Crisis Suits aren’t too beefy, even if they can hit like a truck. So you need those drones/Kroot hounds/other hiwis to soak up the enemy fire. Even heroes like Crisis Suit Commander or the Cadre Fireblade need it.

But that’s OK, because the Ethereal is just bullshit. Sure, he can’t attack enough to kill a grot, but his boosts are amazing. The two most important are the heal and his ultimate: more action points. The heal heals the Ethereal and every unit around him. It’s enough to bring Fire Warrior teams from the brink of death. Wrap him in Riptides – who can boost damage in exchange for hitpoints – and recreate the worst aspects of the 7E edition in Gladius. Giving units more actions points, while on a cooldown like every other ultimate, is very strong.

A fate written in the stars

The writing in T’au is nearly flawless, though. The Gladius team has always been good at conveying the feeling and character of various factions in the game via the descriptions of buildings and units. Even the campaign mission text is great, hiting at the darker undertones of the T’au Empire. I love it.

Maybe it has nothing to do with the T’au DLC, but I just noticed two improvements in quality of life in the game. For one, the unit barks seem to now be given to units rather than entire factions. And you can also change any unit’s name at any time, which is a great boon that more 4X games could adopt.

The T’au DLC for Warhammer 40,000: Gladius – Relics of War is a great addition to the game. Sure, it may have some balance issues, but I guess that captures that character of the T’au in a very meta way. Now where are my Eldar?