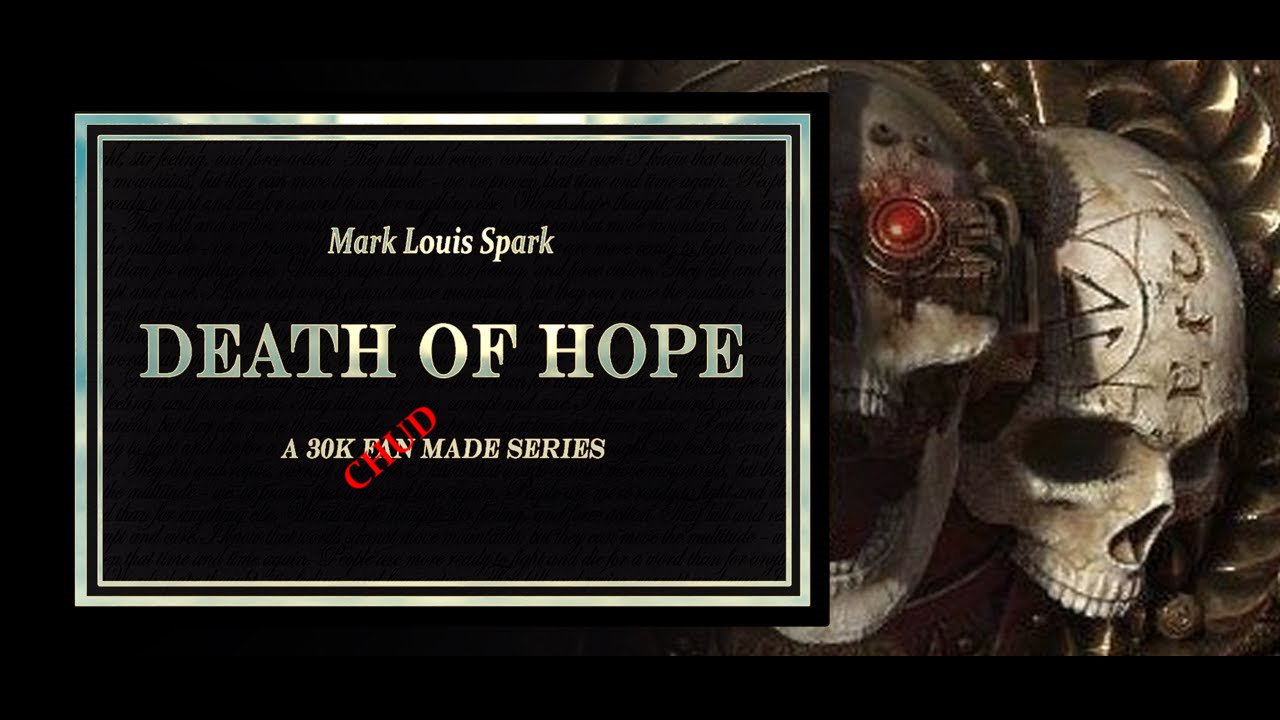 The voice of a chud crying in the wilderness: “please keep politics out of my entertainment!” And as you would expect from a chud, he immediately contradicts himself. For when they say “politics,” they actually mean “something that makes me feel bad.” Anything that doesn’t is apolitical. It is through this cracked lens that this curse descends upon Death of Hope, the long-awaited Horus Heresy fan movie.

If you haven’t watched Anarchy Reigns, the first part of Death of Hope, do so now. It may take some strength of will to endure the font choice on the introduction, but the whole thing is a visual feast, even if the narrative stumbles. While the part that really interests us starts at about 2:48, the acute eye will spot a savory delight as early as the first second.

Drink in that Oxford comma as apéritif before the gleeful jab at the imagined liberal, watching Death of Hope and crying so hard the straw he’s made up of rots. Testosterone. “Oh, this will own those femi-nazis,” the author presumably thought while typing this up. “Tumblr will talk about my magnum opus for years!” He smirks as he finishes the disclaimer with a cheeky “enjoy,” the devil.

All this cheeky fury and pomp, despite the two major attacks on Warhammer being the sustained criticism over lack of representation, and PETA going insane over animal pelts.

Wisdom of the ages tells us: if you’re considering PETA a genuine threat, it means your problems are decidedly of the first world kind.

Death of Hope, in its own words

Here they are, the dulcet tones of fascism. Appealing to the old guard and the true believers both. Now, this wouldn’t be too out of place in by itself – merely a very enthusiastic fan letting his monumental effort (all the visuals, writing and directing in Death of Hope are the labor of love of a Mark Louis Spark) go to his head. But that’s not where these credits end.

This would actually be a great line! Somewhat unnecessary, seeing how you sort-of need to be a fan of Horus Heresy to engage with the content. Yet the ride does not stop there.

It is true that Warhammer 40K was born in 1987 as Warhammer 40,000: Rogue Trader. It’s also true that it was a decidedly silly setting back then. Far from being the TRUE GRIMDARK UNIVERSE, it featured Inquisitor Obiwan Sherlock Obi-Wan Clousseau, Space Marine field police arresting people for vandalism, and orks, a joke about English football fans crafted into a race.

As we continue panning across corpses of dead Ultramarines and listen to admittedly well-voiced quotes from the setting, this gem floats into view:

Oh, this is where Death of Hope goes full fascist, even if it wouldn’t admit it. The claim of preserving our culture. The cry against the perverting touch of modernity. The appeal to a past that never existed.

A past that exists nowhere outside of your memories

For most of the life of Warhammer 40,000, Horus Heresy was just a background event. Set in the year 30,000, it shoved the nascent Imperium of Man into the most tragic of civil wars. It pitted Space Marine against Space Marine, Titan versus Titan.

Rumor has it that it was thought up to allow two identical armies of miniatures to fight in the same board game. Seeing how the Grim Darkness Of The Far Future is focused on the year 40,000, not much attention was paid to Horus Heresy past those early days.

But in 2006, Black Library started publishing novels centered on the Heresy. That’s about 14 years ago – not in some hallowed days of pre-modernity. Four years later, Fantasy Flight Games released their version of the Horus Heresy board game. It was only in October 2012 that Forge World released Betrayal, the first book that adapted 40K rules to 30K. In those dark days of tyranny of one Tom Kirby was the Heresy truly born in resin and miscasts.

But here our dear creator goes, claiming Horus Heresy for himself and the old guard when the damn setting was nothing more than a pimple on the ginormous asscheek of Warhammer 40,000 for nearly two decades. Going by the novel publishing date, the setting is not old enough to drink; going by Age of Darkness, it post-dates the term “Social Justice Warrior.”

So, in essence, that opening crawl is nothing but fascist virtue signalling. There is no glorious grimdark past to harken back to; the game started out as a jokey experiment of transporting Warhammer Fantasy into space by grabbing every sci-fi idea that wan’t nailed down too tight. It got grimer and darker as the developers became higher and higher on their own farts, but it wasn’t the most hardcore release of 1987.

There is no essence to be encapsulated against the modern tides, because the whole setting is modern. It was en-fleshed on this side of the 3rd millenium, not in some groggy days of 1995, when men were men and women had no say. Female characters were right there, front and center, even in the first three books. Games Workshop remains faithful to the “no female Space Marines” rule, but they have been getting better at putting women everywhere around them, from Euphrati Keeler to Lotara Sarrin.

Again, this is punching at shadows and imagined enemies that aren’t there. There is no danger of modernity to Horus Heresy. If anything, the danger to Horus Heresy comes from Forge World and its steadfast refusal to let the right hand know about the existence of the left. I would also say that chuds once again fail to identify capitalism as the thing that’s “polluting” their precious entertainment with politics and gender, but Forge World isn’t even good at being capitalist.

Launching a game without a cheap buy in option – and then sitting on their hands once the Bell of Lost Souls tolls for the Betrayal at Calth and Burning of Prospero boxes – what were they thinking?

Perhaps the author of Death of Hope also aimed to harness the same nerds who were angry about the influx of new blood that came with the plastic starter boxes. I’ve seen it, the resentment that resin-owners felt towards those who dared to maybe bring MK VIII armor to the table. Maybe there’s a bit of a willing demographic there as well? After all, nerds are terrible.

Here, have a look at the Death of Hope trailer:

They wasted all of this potential on petty fash virtue signalling. It makes Death of Hope look more like death of glory.