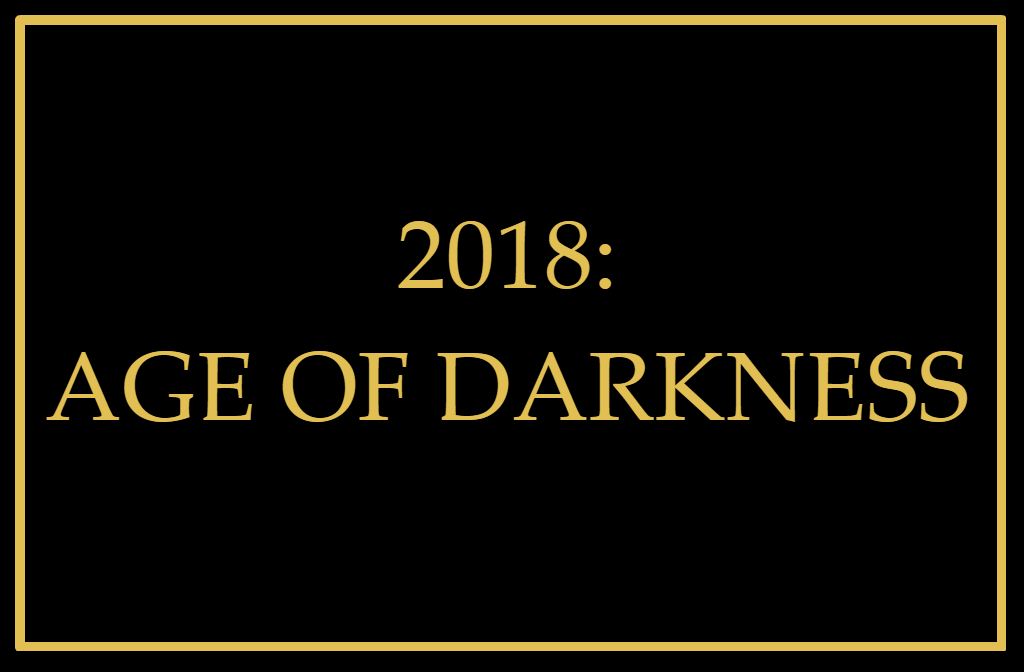 Forge World is Game Workshop’s sister company for people who don’t think they’re burning their money fast enough. For many of us, it’s the last refuge of people who like Space Marines: the Age of Darkness ruleset is probably the only good thing to come out of 7th edition 40K. That said, 2018 was a horrible year to be a fan of Horus Heresy, Forge World’s flagship, standout game.

For anyone at least a little interested in politics, January 1st, 2018, seems like it was years ago. Relativity has been really fucked up since November 2016, after all. However, there were some good things to look for way back when. We had a fresh new Age of Darkness rulebook to account for the fact that 8th edition nixed supply of 7th edition RBs. Granted, said AoD rulebook came more than half a year after 8th edition dropped, but such is the careful management and communication between FW and GW which ensures a never-ending cascade of hilarious failure and disappointment.

There was also an FAQ released in January, which was cool and good, since FW adds typos and editing errors to GW’s general inability to write tight rules.

Unfortunately, the Warhammer Open Day that January manifested a portent of things to come in the Awuuu Pattern Bolters in the Space Wolf upgrade kit. Clearly a careless flip of a 3D model, it was defended as an intentional design decision by both Forge World and the worse fans out there. Why this, this thing that clearly looks like iron sights on every other bolter out there is probably a forward handle! And the Wolves don’t even need front sights!

On the other hand, the Space Wolves Praetor was already the ugliest, most lazily made model for sale, so we shouldn’t be surprised.

However, Rogal Dorn was previewed at the end of the month. He didn’t feature a bitching ‘stache, which is a let down, but he got one of the more stately Primarch models, which is nice.

February: A Month Of Promises

So a Weekender in February saw the announcement of Malevolence, the 8th Black Book in the Horus Heresy series. It would feature Blood Angels throwing down with Daemons as well as Alpha Legion mixing it up with White Scars. Battle Bunnies have a good post on it.

Battle Bunnies also have the most darkly hilarious quote:

Book will be hopefully out this year.

Nope, that didn’t happen. We have seen no signs of the book getting published in anything approaching near future. Angelus, the book that got shafted in favor of Malevolence, is MIA and possibly KIA.

This was basically the station from which the Horus Heresy Is Dead train launched in 2018. Our bitching/resentment/bile has kept chugging through the months, fueled often by terrible Friday releases.

On the other hand, most of the things mentioned in the Necromunda Seminar came to pass within the year. The three houses got their gang released (in plastic) and even their weapon kits (characteristically a few months too late to be of any use for people who bought them at the get-go). Many of the hired guns and special characters mentioned got their releases as well, though some showed rough edges.

For the Heresy models that were previewed that day… yes, we got them, but we had to wait for the longest time for them. We still don’t have stuff like the Daredeo shield generators and one of the missile arrays, though.

On the other hand, Solar Auxilia got a new Rhino-like, if you wanted an expensive if underwhelming box to transport your $$$ infantry in.

March: The Month Of Nothing Much

In March, not much HH happened, which is great for the flagship game of the studio. The peeps had to make their own fun:

I also had a personal experience of FW’s quality service as my friend ordered a full table of Zone Mortalis tiles. Many of them came with obvious defects and obvious terrible attempts to fix hem with green stuff and whatnot. Such “fixes” more often looked like a piece of used gum stuck on a tile instead of any real sculpting effort.

Forge World reps were indignant at the suggestion that these might be factory seconds or that such “fixes” were anything unusual.

Here are some cool Tactical Strike armies to gawk at before we get to April.

So, April opened up with Forge World dumping its custom paints and etched brass stuff in the first of Last Chance to Buy storms – meaning, you had to get them faster than the supply ran out. This made a few people (especially Thousand Son players, who relied on Angron Red) mad and/or sad.

Oh, and the entire Elysian range dropped off the Earth (I guess people were unlikely to buy an army that didn’t have actual rules aside from an Index). Heck, they cancelled some of the Solar Auxilia range on the same day they announced the Aurox. People were both confused and angry.

And that is not counting the never-released but hinted at Cataphracti pads, the Pavise (seen at Open Days for three years) and various characters that have rules, but no models. Players also brought up ridiculous prices, non-existent quality assurance (with some saying that Chinese recasters were better at it) and no free shipping. 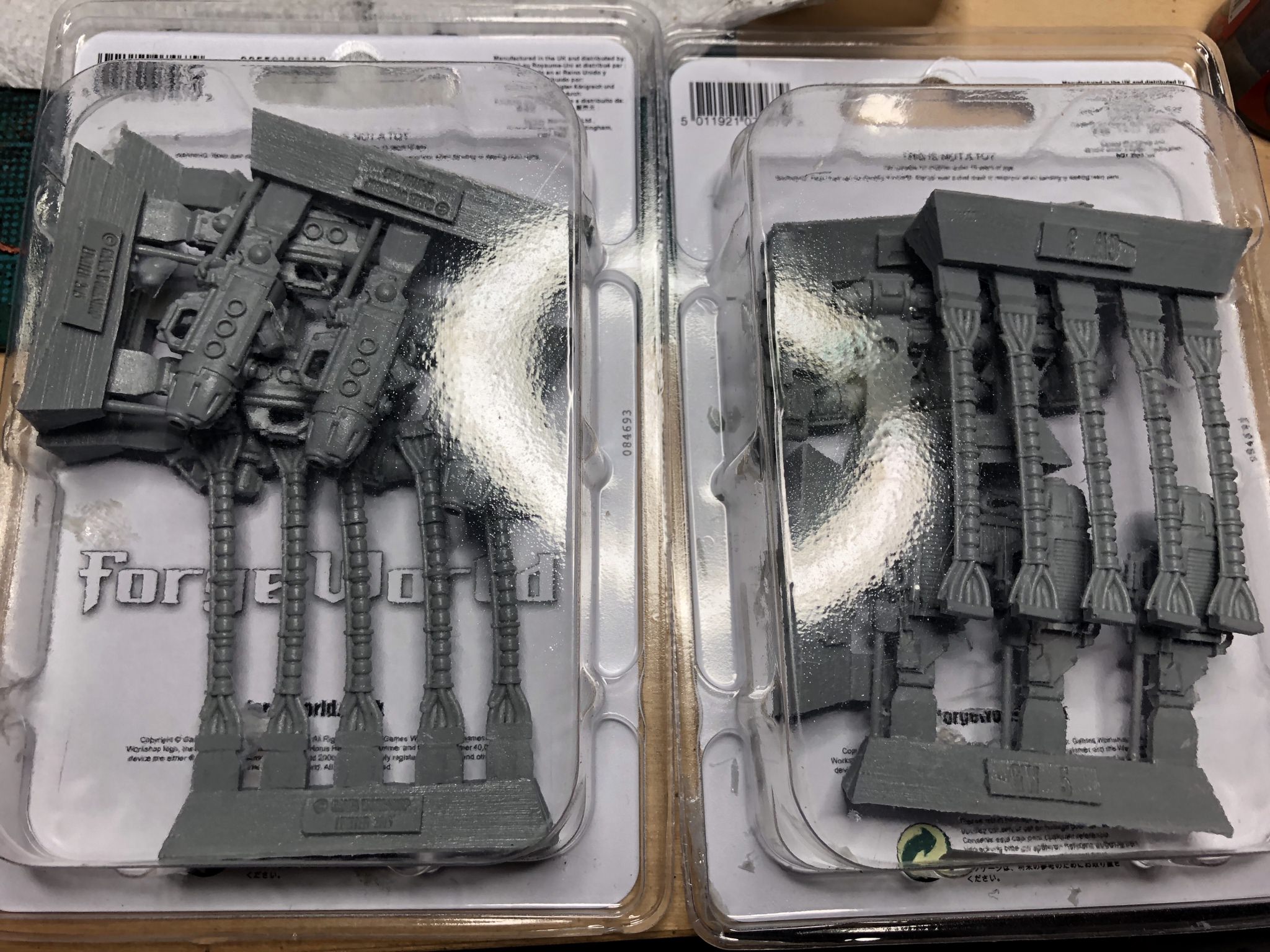 May: This Wasn’t Even LCtB’s Final Form

So, for April, we were mad, we were fuming, we had ideas about studio management that were probably miles above what was actually happening in that one basement in Notingham.

Then came May 4th.

All of the Legion conversion kits were out. Only heads and MK III – MK IV shoulder pads survived.

If there was a good time to shit your pants as a Horus Heresy player, that was it.

The situation was more dire than it had ever been since the death of Alan Bligh. It seemed that Forge World was killing the game at the same time as it was previewing new models. Of course, at the same time, Chinese recasters were getting burns from rubbing their hands so much, as they became the only purveyors of Legion torsos.

On the other hand, Specialist Games unveiled Adeptus Titanicus to rapturous applause, so all the money saved on not buying Horus Heresy could be then invested into AT plastics.

There were also many rumors from folks who attended Warhammer fest, from future AT releases to possible details on the Demons of Ruinstorm (including Militia and Cults level of customization, if not more), to reasons behind the LCTB stuff (GW making decissions to cut unprofitable lines, possibility of some of the stuff returning on Made to Order basis, paints being nixed by the non-hobbyists, and stock space limitation being the driver behind the need to cut down on stuff). The last one points an even more dire picture of management at FW and the relationship between it and GW.

They also clarified that the next Imperial Armor book would be Talons of the Emperor (not heard of since), and that Fires of Cyraxus (30K Mechanicum in 40K) would be released only after Talons and Angelus, which means that it got delayed to 2019 at best.

But the good things don’t last – even a month – and May 18th saw even more LCtBs. Many special and heavy weapons were axed, as well as the entire line of MK II armors. My theory at that point was that FW was discontinuing anything that didn’t have plastic analogues or didn’t fit on Primaris Marines.

I assume at least a few recasters in China got hospitalized with severe alcohol poisoning on that day (they then had the chance to meet their employees that had been previously laid low by Chinese resin fumes).

At least Warhammer Adventures got announced a couple of days later, lightening the mood a bit as peeps made fun of the idea.

A is for Abhuman, a filth that sure does smell,
B is for Boltgun, it shoots a big huge shell.
C is for Custodes, the watchers of the Throne,
D is for Dying, which psykers should, alone.
E is for Emperor, but his name should be first.
F is for Flamer, which makes fire really burst.
G is for Great Crusade, the stars it will traverse,
H is for Horus, whose name we all must curse.
I is for Imperium, its foes we all inveigh.
J is for Jump-pack, flying upon its way.
K is for Knight, a big walking machine,
L is for Leman Russ, a shaggy Space Marine.
M is for Mechanicum, whose gears are made of gold,
N is for Necrons, who all are very old.
P is for Primarch, are there twenty or eighteen?
Q is for Q’Orl, and the Eldar stole their queen.
R is for Recaf, which gives you the worst breath,
S is for Sisters, they’ll melta you to death.
T is for Tyranids, don’t ask them out to lunch,
U is for Ultrimar, upon which they did munch.
V is for Vulkan, his armor ironclad,
W is for Warp, a place we all go mad.
X is for Xenos, the scum that all must die,
Y is for Yarrick, who kills orks with his eye.
Z is for Zoanthrope, who my brain did (splat!)
– forum poster Cessna

May was the bleakest month of the year. Luckily, things got a little brighter afterwards.