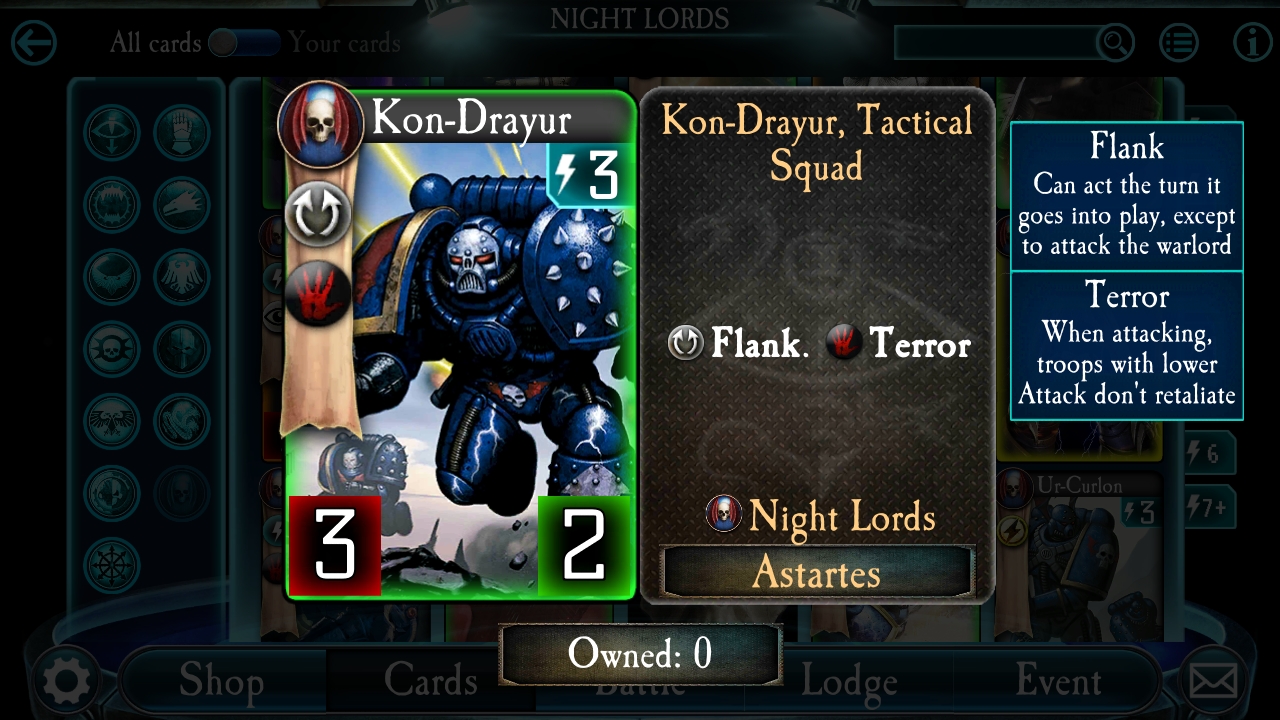 We have just spent two weeks of dunking on Alpha Legion in the event. Now, we have finally welcome Night Lords into Horus Heresy: Legions . Yes, the crazy Batman Marines are in, and they’re bringing Terror with them.

To be precise, Terror is their snowflake Legion specific ability. What does it do? Why, it functions like Sneak Attack as long as your target has lower attack value than the attacking units. You better believe that there are many Night Lord troops that have it. Trash mob armies, beware! It’s 1/- hunting time! And let us not forget that there are multiple ways to boost your units’ attack scores in the game.

However,  the Night Lords have also brought multiple ways of penalizing enemy attack scores. Previously, this was an ability so rare as to be unheard of. Now you have tactics, units and even motherfucking Kurze himself doing it. In fact, the Spook Primarch can do it multiple times and still act, like some bizarro Lucius. It’s already cool for defanging certain units – and absolutely killer when your terror unit is one attack shy from just killing stuff dead.

In general, this is the army that will crush units 1-3 attack units with impunity. Unless you have stealth, not even your frontlines will be safe. RIP bunkers, barricades, First Waves and so on.

But that’s not all. The terror troop legion brings plenty of abilities we’ve seen before. They have an 8/8 Fast unit, for Christ’s sake! There are few units that can trigger Fast on rally, depending on who has (or hasn’t) units. Not only that, you’ll have more Flank than even Raven Guard, making your small-unit blenders even more efficient.

Oh, and let us not forget Stealth units, of which you also get a respectable amount. Hell, Madness – Kurze’s Whispers-of-Chaos-like card at a flat cost of 10 – turns him from debuffer into a Sneak-Attacking Battle-Honors stealther. So as long as you can keep killing units with the madman, you can get stealth for him. Amazing!

What do Night Lords lack? Hard to say. They might be short on draw and their Stealth-detection isn’t special.  They don’t really have “NOPE” cards that delete powerful late game units. They might not be that good at AoE and a bit reliant on Terror and debuffs to work.

On the other, bloodier hand, it’s the legion that can drop – and will drop – temporary Can’t Attack states on units. Previously confined to structures as a passive (dis)ability, now it’s something that you can dish out as a weird Stun-adjacent state.

As a Legion, Night Lords seem like a lot of fun. Sure, they’re not pure fuckery like Alpha Legion is – nothing has more fuckery than them – but it’s still a great joy to play. Playing against them, however… Well, at least they don’t get Secret Orders!