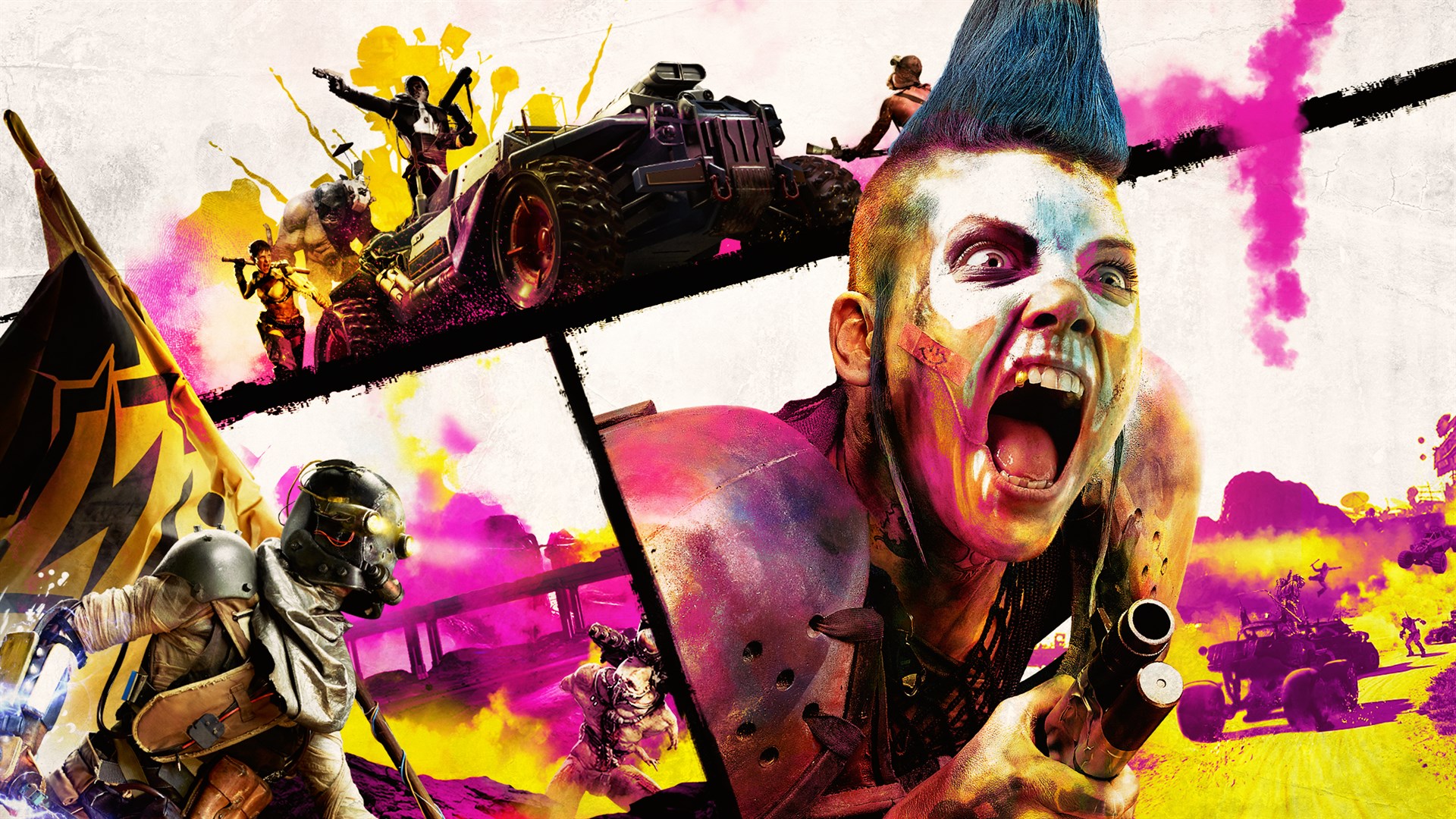 Now, when the original Rage came out, it was not a big hit. Sure, it had that fancy tech to load massive textures, but the game was short and ended basically on a fart. I was surprised when I heard they were making a sequel. I was even more surprised when I finally got to play Rage 2 after subscribing to Xbox Live for PC.

As someone who played Rage 1, I was astounded by the amount of world-building that was done to set the stage for the sequel. Not only was the Authority – the technologically advanced fascists – defeated, but there had also been a war against its mutant army. Those days are in the past now, and the biggest colony of Ark program survivors is the isolationist Vineland.

Or at least was, as it gets promptly destroyed by the Authority in the tutorial sequence. As Walker, one of the survivors and freshly dressed in a Ranger suit taken off a corpse that wasn’t even cold, you now have to head into the wasteland and stop The Authority once again. Or, rather, stop General Cross, his fascist dreams of purity, and his clone immortality scheme.

The in-depth look into the lore of Rage 2

Boy, I never would have thought that one paragraph wouldn’t be enough to describe the backstory of Rage 2, but here we are. Walker – you select gender at start, and I chose female – is a descendant of Ark residents. They were the people sealed in underground Arks to survive the asteroid impact that ruined Earth and emerge to rebuild humanity.

As such, they’re filled with nanotrites (nanobots), which they pass on to their descendants. These nanotrites allow them to use Ranger suits, which basically give you magical powers. Rangers were Vineland’s first line of defense, the only people to wander into the wastes. Now, Walker is the last of them.

It’s not the first time that we see hereditary tech nobility in sci-fi. I’ve read comics about power armor operators and their descendants becoming the new feudal knight class. We have Warhammer 40k/30k and their Knight houses. But the tech inheritance is rarely so closely tied to blood and inheritance. Don’t have the nanotrite blood? Is it a little thin because momma loved a wastelander? Sorry, can’t be a Ranger.

But that’s just an aside that’s not really elaborated on in the game. After all, the focus of Rage 2 is explosive first person shooter violence. Walker will be working for three veterans of The Authority Wars, each fulfilling a different part of the plan to stop Cross. They will be the tree concurrent threads of the main plot. Too bad that story is flat and unsophisticated. However, since Rage 2 is an open world game, you will have plenty of distractions along the way, almost all of them extremely violent.

Granted, it’s a bit difficult when Walker refuses to pick up weapons that don’t come from an Ark, but you can do a lot even with a pistol and an assault rifle. Besides, you have your powers! Unlocked the same way as weapons (by finding an Ark on the map), they will let you force push people, dodge-dash perform violent rushes, build your own temporary cover, launch gravitational singularities, hang in the air, perform jump-slams and more. By the end of the game, you’ll have more powers than you’ll be able to reasonably use.

But wait, there’s more! Rage 2 follows the paradigm of ye olden FPS, so Walker will be carrying all of her weapons at the same time. Those range from pistols and assault rifles, to gravity dart guns and command-detonated incendiary revolvers. Oh, and just like powers, those weapons are upgradeable for additional effects, from faster reloads to weirder effects. Granted, each tier of upgrades offers two mutually exclusive ones, but upgrades to Walker herself (via the “Projects” which are just map-activity related skill trees) will allow you to switch between them.

Keep your enemies close to use Force Push

In the end, you’ll be loaded for bear, and thankfully so, as the wasteland scum will not go down easily. Rage 2 mostly involves fighting three colorful bands of bandits as well as mutant infestations, and the plot will often pit you against the Authority. The gangs have a good mix of ranged and melee fighters, as well as having specific abilities and arsenals. They will improve as the game goes on, so you will always remain challenged.

Yet you will have unparalleled mobility on your side, parkouring over the bases, gas stations and other set pieces of the game. It’s really a joy to see this degree of verticality in level design, and seeing the labor of love that went into making most of your combat locations if not memorable then interesting… and explosive. There will be a lot of exploding barrels and their equivalents, and you’ll do well to make use of them to even the odds.

Yes, even a Ranger infused with nanotrite powers that allow her to remotely detonate explosive barrels needs to even the odds sometimes.

The asteroid that only ended sane people

The opposing bandit groups are a Rage 2 character on their own (as real characters are sparse). As the game doesn’t have Borderlands’ propensity for named bosses, you’ll be mowing down hordes of mooks. But that’s OK, because literacy is magic, and gangers love leaving behind logs for you to read once you’re finished killing them all.

That’s how you learn that Goon Squad (legally distinct from Goon Swarm) is an Authority-bankrolled loose grouping of every thrill-kill crackhead in the wastes. Or how Swamp Hogs are conglomeration of Deliverance bikers who have a very communal outlook on sex. The Immortal Shrouded are the most awesome, as they’re some warrior sect with a strong belief of not showing their faces to anyone.

You’ll even get to talk to some of them in the hubs, where you’ll find side-quest givers. Those side-quests are very simple – they just point to a location you have to clear – but they serve to give flavor to it. Sure, you would have cleaned out that farm for the resources in it (you’re always told how many special resources a location have), but now you have a reason to do so!

Aside from all the exploring and shooting and killing, you have driving (it also involves killing). Walker has her Ranger super-car, which is the only upgradeable vehicle in the game. It starts out with miniguns and can be upgraded with many other things. It can also be repaired in the field (NANOTRITES, SON) and is slightly sassy in demeanor.

There are many other cars in the field as well and the designs are quite fun. Since fast travel is in short supply (you can only fast-travel to hubs), you get to do a lot of driving. I just wish there were more reasons to use vehicles other than the super car.

Though even that one falls by the wayside once you get the flying bike. Ain’t no better way to break an open world game than to give the player the power to fly, as Morrowind and Mercenaries 2 can attest. Why do you think we didn’t have flying in Oblivion?

Painting with all the colors of Rainbow, a dead Goon

However, unlike Oblivion, Rage 2 is a very vibrant, colorful game. That’s not easy to do when most of the map is a wasteland of some sorts, but they did it. The open world vistas are gorgeous, the combat locations are characterful and full of paint cans that explode into clouds of neon colors. The enemy designs are fun and your guns aren’t that bad looking either. If there was one downside to the visual stuff, it’s that side quest givers don’t have the best of facial animations. And as we see from game engine cut-scenes in the campaign, Rage 2 can do much more.

The sound design is good as well. Sure, the Goon Squad and others don’t have quotes as memorable as “Strip the flesh, salt the wound,” but they work. I think Immortal Shrouded have the best voice acting, but Immortal Shrouded get the best anything anyways. The gun audio has a nice feel to it and headshots haven’t been this satisfying since Blacklight: Retribution.

All in all, Rage 2 is a surprising sequel to its famously short predecessor. The story campaign might be a little shallow, but there’s a lot of killing side activities to along the way. In the end, Rage 2 is well worth the price of admission, especially if that price is just the Xbox Live subscription.