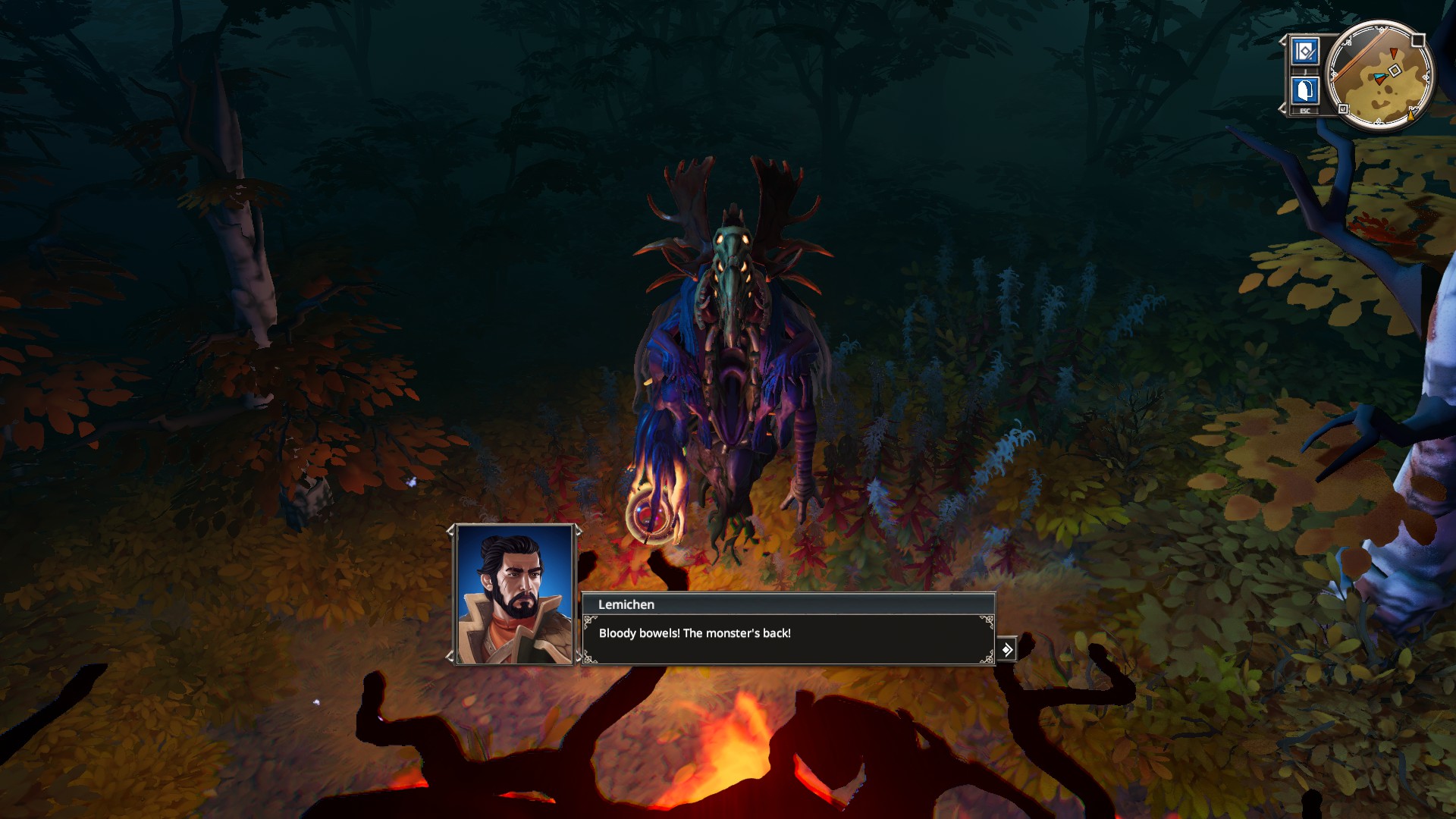 Time for a short review of Iron Danger. Why short? Because the game is good enough for me to have written two big ones already. Let’s see if I can do it in far fewer words!
Iron Danger takes place in the land of Kalevala. Steam-belching dieselpunk cyborgs are currently invading it from the north. Kipuna, our protag, was to be just another casualty when her town got wiped out. However, she came into possession of a shard of the Auralith. With it, Kipuna can rewind time to avoid death… and also cast powerful spells. It’s time to collect the rest of the artifact and beat the invaders.

This fantasy Finland game (I mean, come on, there are healing saunas) is an isometric RPG. You’ll be controlling two characters – any more would get unwieldy once the battle is joined and you have to mess around with time.
You usually control one character and the other follows. However, once you enter battle/someone gets hurt/you press the “trance” hotkey, characters become controllable individually. Each of their actions is recorded on their own timeline. All actions in Iron Danger are measured in “beats” half-a-second long – most usually take more than one.
Of course, the timeline isn’t endless and the past can fast become set in stone, but it’s usually enough to avoid death, stab someone in a more efficient manner, and so on. Most attacks in Iron Danger are physical – you have to get in their way to get hurt . With good timing and positioning, you can not only avoid them, but even put the enemy in the harm’s way.

I made all the Finland jokes in other reviews

Granted, it helps that Iron Danger gives Kipuna an ever growing array of spells. They deal elemental damage, grow patches of obscuring weeds, makes the enemy turn on its allies, and so on. They can combo quite well – or quite dangerously, as far as fire spells are concerned.
Aside from Kipuna’s spells, she and her companions all have their own attacks and special abilities. You also have consumables and expendables, like oil barrels. Just like spells, those abilities can be upgraded between missions. Since there’s no XP in the game, you get upgrades when Iron Danger’s devs allow you to do so.
It’s a bit sad Kipuna’s companions have a much more constrained set of tools to work with. Sometimes, all of your good stuff is on cooldowns and you don’t know what to do. I bet that’s the reason why Iron Danger features both consumables and spells for clearing your timers.
Now, moving to more technical matters, Iron Danger is a lovely game with some great visuals. It’s stylized, sure, but it looks great and I love how colorful the world is – and all the little details that other games like this would have missed.  Moreover, this title really stands out with great voice acting – usually a huge stumbling block for many an indie dev.
Iron Danger is a cool game with a combat system that really shows love and work. Wish I could see that amount of commitment in more AAA games. Oh well, indies lead the way!
Share On Facebook
Leave a Reply Cancel reply