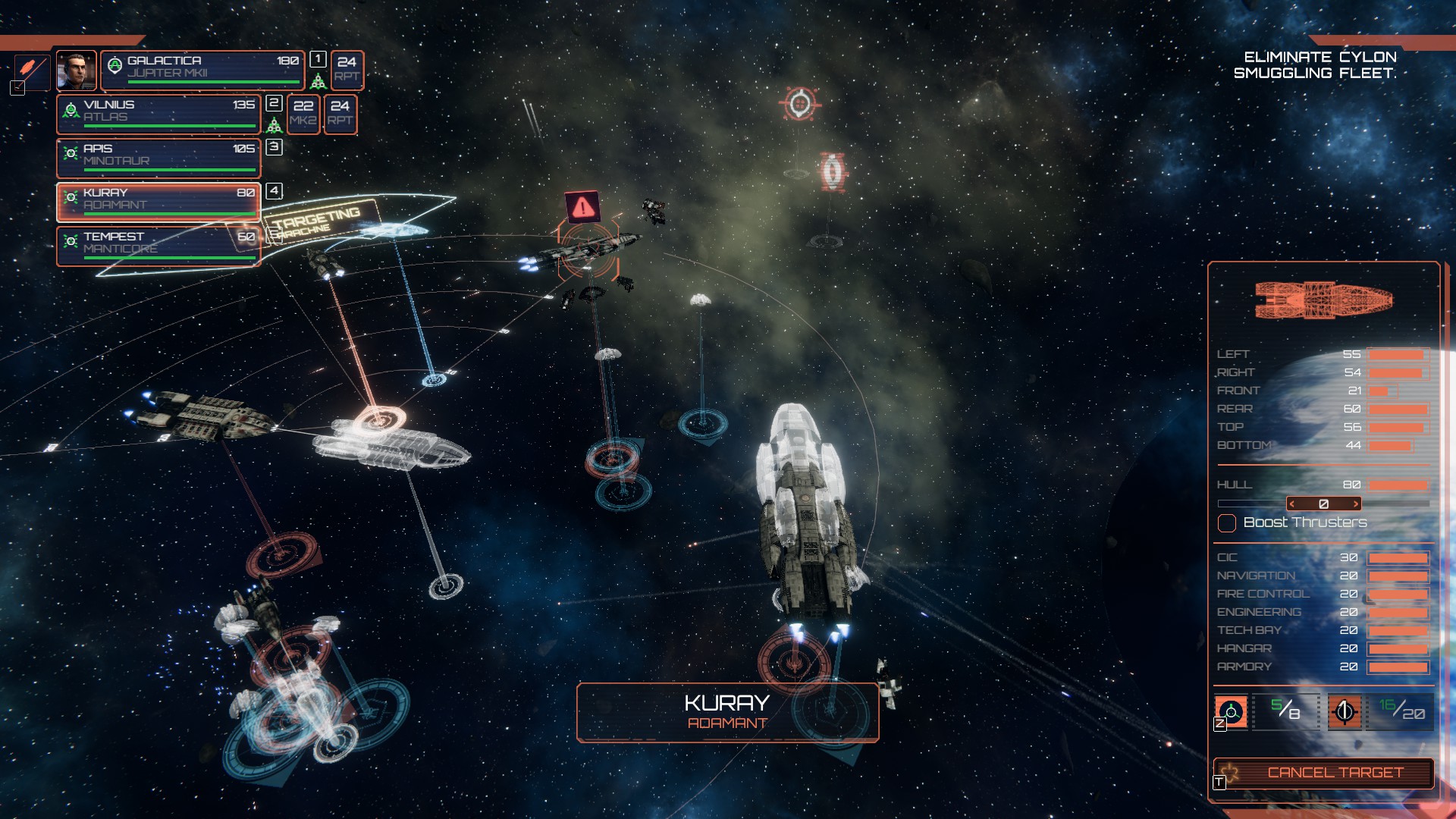 When they first announced Battlestar Galactica: Deadlock, I was not amused. A TV series tie-in for a franchise I considered dead? Not something I was interested in. Yet the good people at Wargamer/Strategy Gamer would not stop ranting and raving about the game, and I’m nothing if not impressionable. Here’s me reviewing Battlestar Galactica: Deadlock and its latest DLC, Ghost Fleet Offensive.
Deadlock takes place during the First Cylon War (preceding the second one depicted in the reimagined BSG TV Series). A prequel to everything you know in the franchise, it sets you in command of the Colonial Fleet fighting against the original Cylon forces. That’s right, they’re not yet the flesh-metal monstrosities we all know. You start by commanding the mobile Daidalos shipyard and the colonial fleets it’s constructing. Later on, DLC after DLC advanced the storyline and added more ships.
Ghost Fleet Offensive, the latest in Deadlock line, starts you out in command of the titular Battlestar Galactica. The original Deadlock campaign sprawled out across the Twelve Colonies of Kobol. Meanwhile, Ghost Fleet takes place on a much smaller map. The campaign mechanics have also been simplified (as already seen in a previous DLC).
Undertaking plot missions not only rewards resources and advances the plot, but also increases the Cylon threat, which comes with certain maluses to your strategic situation). Executing optional Resource missions decreases it (and gives you resources). You don’t need to handle the loyalty of your colonies anymore!
Oh, and the campaign starts at a much higher level than Deadlock’s. In command of Galactica, you’ll be destroying a Cylon Basestar – as capital as Toaster ships come – within the first few missions.

Battlestar Galactica: Deadlock in a nutshell

Now, to speak of the Deaclock itself, for I have not reviewed it for this blog before: the game slaps. The battles are turn-based-simultaneous resolution. First, you set the ship flight trajectories, use abilities, lock targets. Then you see how it all plays out in nail-biting real time.
You can’t stop anything, so you have to hope your plan holds (or, you know, save-scum). It’s amazing and it sets emphasis on tactics rather than your APS. No need to know all the hotkeys and click faster than the other guy like in most RTS games! Instead, it pays really well to know the strengths and weaknesses of both your fleet and the enemy’s.
Since the Deadlock offers 3D battles (though not to the level of Homeworld’s full 360), each ship has distinct armor facings for the ends, the sides, top, and bottom. Armor is ablative, and can’t be restored during the battle. The same applies for the HP pool that gets hit once you punch through the armor. Therefore, maneuvering is key to preserving your ships.

Sure, you may get one of the support ships introduced in DLCs that can heal you stuff. Yet you can’t spam them, the repairs only get limited uses per battle, and the supports ships are made from tissue paper. And once you get into a scrap, a even a military ship that comes under concentrated fire is going to wither fast. Trust in your skill as a commander before hoping to outlast (or outgame) the threat!
What’s more, in Deadlock, your ships have systems that get affected depending on what part of the ship gets damaged. Those systems can determine a lot of things – and you need to prioritize repairs. But that’s not all – repair impedes the work of the system in question. Need to repair fire control? Great, now you can’t launch missiles until it’s done. Thinking of letting your armory breathe some vacuum while you’re focusing on hangar repairs? Hope nobody boards your ship in the meantime!
The Cylons are good at messing with systems via hacking attacking that some of their ships (and fighters) can execute. When managing their own ships, they can also split processing power between systems, boosting some at the expense of others. The Colonials have no such issues, nor the ability to fine-tune system power. However, they can take brute-force approach and switch ship posture from attack and defense (on a sliding scale). Knowing how to shepherd your resources is important.
Oh, and Colonials can also boost their engines, trading stance-changes (and basically the ability to turn) in favor of GO FAST. Then again, maneuvering ships in Deadlock is fun. Ships are always moving forward – just like in Battlefleet Gothic: Armada – but you can change how far they go. The Y axis control is limited, sure. Yet you can not only execute turns, but even do so with major yaw controls. Just keep in mind that multi-track space drifting will hamper your mobility the next turn.
It’s great and it slaps. Just make sure to not run into other ships, as the results will be explosive. Don’t worry – Deadlock will warn you when it detects ships on a collision course. Whether this means that you can guess where the Cylon ships will go next turn by potentially putting your own boats in their path to collect data via these warnings remains debatable.

We must not forget: this Deadlock is BSG, after all, and fighters play a major part in the game. Wings can be lost between missions without any issues, and one that limps back to its ship during the battle will be repaired and reconstituted to get back into the fight. Yet their impact is more pronounced than their expandability implies.
Knock out their fighter cover and your Vipers will savage some Cylon ships with relative impunity. The same applies to you when Raiders get to roam free. Granted, all ships can target fighters – and capitals like Battlestars can unleash flak curtains on their broadsides to kill both ships and missiles. But when you’re shooting fighters, you’re not tackling capitals.
Not every ship in Deadlock has a special ability, but even having the choice of munitions can give you a lot of options. The humble Colonial Manticore corvette, its great maneuverability and strong forward guns (and the piddly rear-facing turret) turning it into an overgrown Viper, can take missiles.
Will you take guided missiles, a focused barrage of which is the favorite opening move of a Colonial battlegroup and can delete or cripple most ships? Or will you use its maneuverability to launch a swarm of unguided torpedoes at the right moment? Maybe you’ll mount exotic munitions that actually clear our incoming enemy ordinance? The choice is yours.
Or just get a one-shot nuke and bloop away some careless ship that costs nearly twice as much. That’s always fun.

The campaign system in Deadlock is a wee bit less exciting. You can build ships and you can rush their construction by spending more requisition. You put your ships to fleets, up to their officer’s allowed point limit. You then jump the fleets to a destination that presents a mission and fight it out.
You hire new officers and promote them to unlock more abilities (or just greater fleet capacity). You judge whether to jump now and pay some Tylium for spin up the drives faster or wait a few turns and jump for free. You buy new ship designs (once the campaign progression allows) and try not to get all colonies to jump ship (to Cylons). You’re also playing with ship experience and persistent damage turned on – why wouldn’t you?
Along the line, you’ll encounter a lot of voiced dialogue in Deadlock, both in the campaign map and in the missions itself. The devs are committed to voice acting. One of the DLCs mostly expanded the background radio chatter that happens during the battle. However, both the things the characters say and the way they say it could use some work. I find it hard to root for individual characters in the game rather than my ships (why would you play with ship experience off) or the Colonies as a whole.

Spooling up the rant drive

But you know what? Black Lab Games should have been the ones to develop Battlefleet Gothic: Armada. When Tindalos got their hands on the license, they were an untested studio – or rather a studio that was tested and found wanting. Despite all this, they managed to nail the atmosphere and the visuals of Warhammer 40,000 perfectly.
What they did not do was make a good game. There’s a lot of micro and APS in BFG:A and I hate it. Meanwhile, Black Lab Games may not have executed the feel of BSG perfectly, but boy did they get the gameplay right with Deadlock. If we could somehow slam the best of those studios together…
That is not to say that Black Lab Games messed up with the visuals of Deadlock. Aside from the character portraits, the retro computer interface feels right. As for the ships themselves, they’re nice and distinct.
The battles look great and hectic, space is beautiful, and once you kill enough Cylons to unlock their unit views in the codex, you can really appreciate the subtle details that went into creating their designs. The Nemesis frigate looks like the mean evil-tech ship that keeps hacking your ships (and one of the better candidates for Deletion Via Guided-Missile Alphastrike) that it is. Each of the Cylon fighters is very distinctly not human, inspired by the rough and brutal original series’ designs.
As an added bonus, the Wardriver heavies already have hints of the shape of the modern series’ half-biological craft.

So say we all

All in all, Battlefleet Galactica: Deadlock is a great game, and Ghost Fleet Offensive just continues that trend well into the Season 2 of DLCs. I think it’s a great joy for the BSG series fans (probably even ones of the original series), RTS junkies and just sci-fi fans in general. As for me, for the foreseeable future, I will remain mad – very mad – that it was not this team that handled the gameplay aspects of Battlefleet Gothic: Armada .
Share On Facebook
Leave a Reply Cancel reply