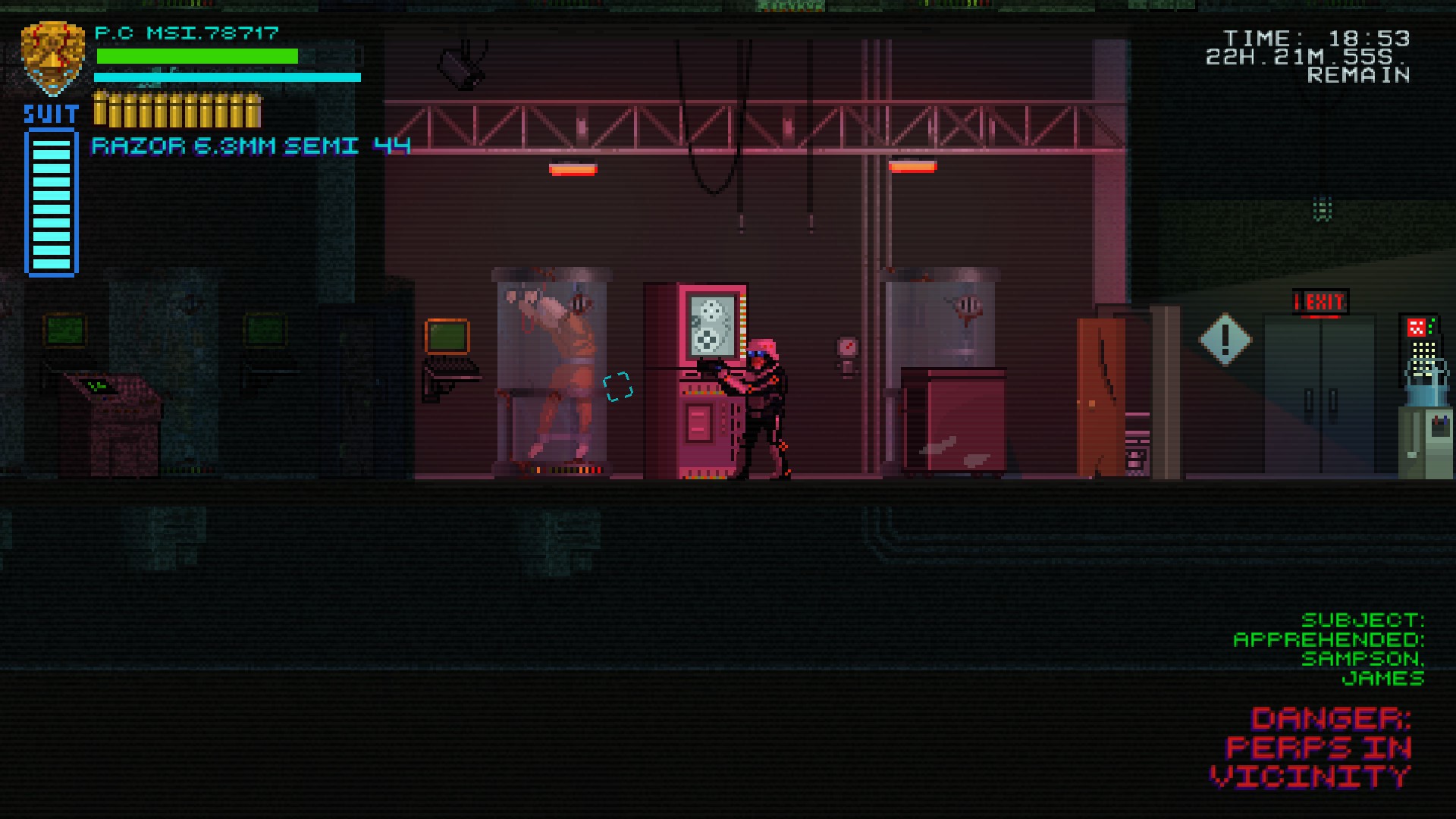 Properly capitalized as “miniLAW: Ministry of Law,” this is an interesting sidescroller game about being a postapocalyptic cop. But rather than investigating crime, you wear power armor and arrive at crime scenes via low-altitude, no-opening drops.

The time: future. The space:New Babel, the only city that exists after the end of the world. 100 million remaining human souls eke out an 80’s cyberpunk existence between its walls. But a mysterious terrorist appears on TV and declares to have hidden a nuclear bomb in the city. And it’s up to you, a power armored cop, the mailed fist of the Ministry of Law (miniLAW), to kick down doors, take names, find the bomb and defuse it.

The city of New Babylon is a circle at the center of which sits the Tyrell Corporation-esque miniLAW HQ. You and your flying car will fly to blocks that are reporting crime – they’ll flash in red (they also have timers). Once there, you’ll grab the handle (it’s very satisfactory, as the RPS review of the game notes) and jump down. Every crime scene has several perps you need to force to surrender, knock out or kill.  You’ll know the status of each one by the three bars that define their stats – stamina, psichological state and health. You’ll also see their name. This is because MiniLAW will also order the apprehension of a specific target (or, very rarely, order their execution).

The many shades of crime

Perps come in various classes, but they also have randomized psychological profiles. Sometimes, a chain-wielding mutant is a “coward” and you’ll need just a few shouts to make him give up. Were he a “professional” or “career,” he would need a lot more convincing. An “elite” has to be beaten to an inch of his life to give up. Killing is the easiest way to do it things, yet miniLAW rewards the least requisition points for kills. Forcing the perp to surrender makes you the king of req mountain. You also get decked points if you knock out or kill a surrendered criminal.

While on site, miniLAW may task you with actually solving a crime, which, at most, is playing a small minigame to analyze a victims DNA. Murder is always the funniest crime to deal with, as criminals will be shooting nearby civilians anyway, yet you’re only dealing with one specific dead guy.

As you battle the four gangs infesting the city, you’ll collect clues for miniLAW. They will point you at gang HQs which you’ll be able to raid to find the bomb and its defuse codes. You’ll also be using your phone to interact with informants, suspects, witnesses and a lot of other people. It’s like a different minigame by itself and it allows the writing of the game to shine. Too bad you can’t use the keyboard numpad to actually dial the number – you have to do it all manually with the mouse.

The moral choices you make during the phone conversations are more impactful than the ones carried out in the mean streets of New Babel. Talk well enough and you may not need to go to brain surgery to extract data from the suspect. Of course, your bosses might still do it. Don’t forget: neither miniLAW nor the other agencies are good guys. It’s just that the gangs – the best of which “a revolutionary movement that’s actually just into crime now” – are worse.

Phone conversations give leads and let you understand the world better, but they don’t reward requisition. And RQ is the blood that powers your veins. It allows you to buy ammo and armor upgrades (or reroll those lists) at the miniLAW HQ. It allows you to repair your armor (it consumes time – and the clock is always ticking). It’s also there when you want to increase your skills, from armor (take shots better) to driving (fly car faster) to diplomacy (shout at people better).

However, the timer and the gangs aren’t the only things working against you in miniLAW: Ministry of Law. People who had played the game in Early Access still complain about the controls and I can do the same. You punch with the left mouse button and use the offhand weapon with the right. You shoot with the left mouse button, but only if you’re aiming (read: holding “Space”) at the same time. Melee combos exist, but I’ve never used them. It’s much easier to rush into melee (by tapping “F” – it will spend most targets sprawling) and then just try and beat people up or get them in a choke in preparation for a headbutt.

Blocking? Nobody has time for that!

You can also take cover. It uses the same button as interacting.

It’s a hostile world out there, Constable Cop

Compared to this, even the toughest enemies in the game seem more of a nuisance. Sure, it’s hard to take them down peacefully, and the HQ bosses are a pain in the ass. But with the right choice of ammo – people can usually take at least a single round and still stand, but they become more pliable afterwards – you can go far. Me, I invested heavily into armor and armor upgrades, and I could shrug off most non-heavy weapon fire.

And even if you go down, if your armor hasn’t been completely wrecked, it can resuscitate you. However, you may be notified that certain armor systems are malfunctioning due to damage. After you get the health regen upgrade, armor repair will be the #1 reason to visit the HQ.

In general, miniLAW: Ministry of Law is a pretty game. The retro art style works, both in setting the atmosphere wonderfully and for sparing the developers the shame of producing a subpar 3D game. The interface (especially the phone) is as much work of art as the game itself. The sound works well, even if your cop voice – basically the only real speech you’ll ever hear – must have been done on a text-to-speech device. And you’ll heart it often, as shouting at the perps often goes a long way towards making them give up.

MiniLAW: Ministry of Law is an interesting game on a timer. The art probably plays into the nostalgia for the fun cyberpunk of the early 90’s (for a given definition of fun). And you can really tell that the devs are using every part of the pig. Shame about the controls tho!