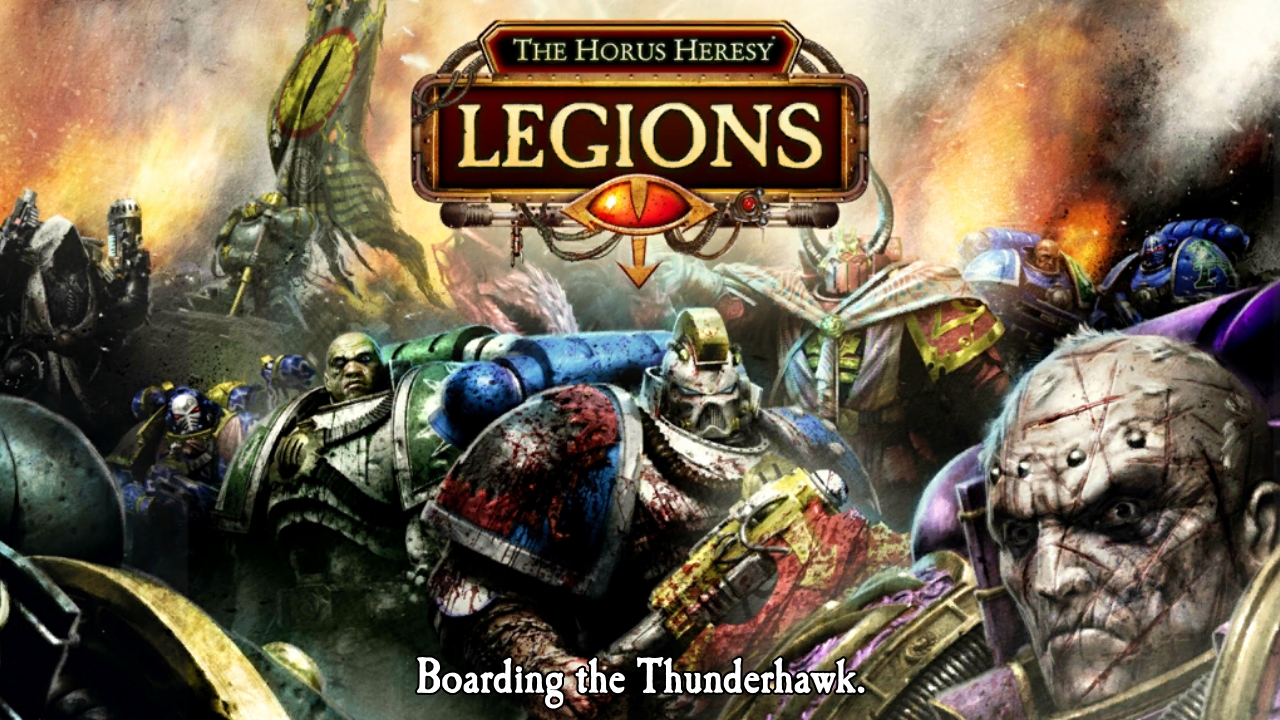 I’m a miniature man through-and-through. Card games abstract too much; I’m here to experience a story of fighting men and women doing heroic stuff. With cards, it’s just a game, unless you go to great lengths to read a story in what’s happening on the table. Then why am I playing The Horus Heresy: Legions?

The Preternatural Origins of The Horus Heresy: Legions

Horus Heresy started out as a justification why Games Workshop’s old, pre-Epic 40k Titan (giant robot) game had the same models for both sides. It’s a civil war, silly, of course everyone has the same Titans! Eventually, it grew out to be much more, to the point where Forge World released Age of Darkness. It’s a Warhammer 40K derived ruleset that focuses on Marine-on-Marine violence in the days when fully half of the super human Space Marine legions turned from the Emperor of Mankind. Refighting the battles of those dark days is what the TCG is all about.

Everguild Ltd., the creators of Horus Heresy: Legions, are the developers of Drachenlords, a 4.3-rated mobile TCG. There also used to be a physical Horus Heresy TCG – Legions mines that game mines for card art. It’s not that far out to suggest that that Horus Heresy: Legions is just a reskin of Drachenlords – most GW branded games released by minor, unknown studios are. But that is just a minor point of trivia; you can’t fault a game for being derivative when it’s good. You should definitely complain when it’s bad, as it happened with that horrible Plants vs. Zombies knockoff featuring Dark Angels and Orks.

Back to the game! In Horus Heresy: Legions, you build your decks around a commander. In most cases, that will be one of the big players: Saul Tarviz, Gavriel Loken, Calas Typhon, Kharn, Mortarion and so on. You then build a 30 card deck out of troops and tactics drawn from the character’s Space Marine Legion, Chaos cultists and demons, Mechanicum allies and forces of the Imperial army. The composition of the army is entirely up to you. Even loyalist characters can take troops and tactics branded heretic or characters that would never accompany them in battle.

The rest is pretty standard TCG fare. You start the battle with a random hand of cards – you can choose to replace some or all of them – then you draw one at the start of your turn. To play cards, you pay energy from a pool starts at 2 on the first turn and goes up to 10. Energy is also used to pay upkeep for any fielded demons. But only a major slugfest lasts several 10-energy turns!

Hope That Meta-Luck Is On Your Side

Luck of the draw plays a huge role on the game, there’s no doubt about it. But the tactics and interactions between cards and abilities are fun enough to keep you playing. For example, Emperor’s Children cards often rely on the Perfection mechanic: abilities that fire off if the card played fully depletes your energy meter. So this adds a layer of interactivity and choice even to the order that you play your cards in. You can then choose Saul Tarvitz, the most famous EC loyalist on Istvaan III. He has a 0 energy ability to reduce the price of one card in your hand by one. Suddenly, you’re playing more expensive cards than the opponent and firing off Perfection.

However, the nerf bat hit Tarvitz in the latest patch. Previously, he also had a Battle Honor (fires off when you kill a card in your active turn) ability which healed him for 2 Health. As a passionate Tarvitz player (Loyalists 4 lyfe), I was often faced by interesting choices: do I use his ability to play an expensive card early? Or do I try and kill a troop to both mess with opponent’s plans and to couch the damage with the healing ability? This made 2 health/2 damage troops easy prey for Saul. 1 damage cards were a boon, as they healed you more than they hurt you. However, the Battle Honor was removed, and I’m extremely sad over it.

This Is Not 40K, Losing Your Warlord Actually Matters

The rarer warlords – almost all of them Traitor – are still hard cookies to crack. Some of them are just base commanders, but better. Typhon can heal 3 damage while Nathaniel Garro (inexplicably in his Knight-Errant garb) only heals 2, while Abbadon’s power deals 3 damage as opposed to Garviel’s 2. Oh, and the rarer dudes have more health. Meanwhile, the traitor Primarchs have the Whispers of Chaos ability – when reduced to one health, the controlling player receives a free upgrade card, which transforms the traitor demigods into their demon versions, healing and buffing them. If anything, this keeps you on your toes.

But with careful deck building – and, in events, luck of the draw – you can defeat anything and anyone. Healing cards are rare, while instakill cards – destroying troops outright – can be found in almost any list. Those are to be hoarded to deal with special units. Meanwhile, many troops have special abilities, usually keyed to their theme. So Death Guard and Imperial Army offer more units with Frontline – the ability that forces enemy to destroy said unit before being able to choose targets freely. World Eaters have basically no Frontlines, but plenty of Unstoppable (ignores front line), Bloodthirst (can attack twice), Rage (abilities triggered by wounding) and so on. The weaknesses of certain Legions can be ameliorated – least a little – by the allied cards. Me, I have some difficulties since I refuse to add any Chaos-related cards to my Loyalist decks.

But how do you get cards? Well, Horus Heresy: Legions gives you log-in promos, in that you receive a box every six hours. Daily quests reward you a box for five regular daily victories – and then become unavailable for 24 hours. You also get boxes for achievements and leveling up. Said boxes can give you tickets – those are used to enter events. There, you get to chose from event commanders and three decks constructed for each.

In an event, you gain a box just for entering, and a box of increasing rarity for every two victories. However, you can only cash them in once you achieve 12 wins or – more likely – three loses. Boxes also contain gold coins, which are used to buy either card or – more importantly – cosmetic boxes in the store. You also get gems – mostly by getting duplicate cards, with rarer ones netting you more – which allow you to purchase cards (and cosmetics!) directly from a store roster that refreshes daily.

All in all, it’s a system that… works? It’s hard for me to say, I started the game with 3000 coin pre-beta sign-up bonus, worth about 20 Euro. It bought me 30 card and cosmetic packs, so I’m certainly not lacking in that department. However, commanders are comparatively rare, which means that the game can get a little boring if you don’t partake in the events. But I’m a sucker for that Horus Heresy fix and this is the easiest way to get it, so I keep grinding on.

We Strive For Perfection In Card Art Design

The visuals of the game are a mixed bag. It uses the art of the previous game – currently found in volume 4 of Horus Heresy Visions books. The difference between quality and style of illustrations can be quite jarring. The interface isn’t that Warhammer-y, but I think it works and is usable. It certainly looks better than what they had for Drachenlords. Battlefield backgrounds and card stacks are probably the weakest part of it all. It is balanced somewhat by the way the card abilities are displayed. Unstoppable cards most often show jetpacks mounted on their backs, hazard-stripe framing extends from the sides of Frontline ones and Stealth-havers project a shimmering cloak over their art. It really helps if you want to evaluate the situation with a mere glance.

The audio is a bit weaker. The music is OK, though my girlfriend says it’s starting to get on her nerves– and she’s not the one playing it! Most battle sounds are good enough. However, there’s an issue with the warlord barks. They are fully voiced, and they’ll exchange quips at the start of the match. Using (unlockable) quips is also the only way to interact with the opponent during the match. And while some of them are neat, especially when certain warlord combos have exchange special greetings, it can get super repetitive. You must also account for the fact that some recordings are better than others. Still, the quips are an interesting mechanic, using these limited proxies to tell your opponent to hurry up if they’re taking too long – or congratulating them for the good game before delivering the final blow.

The game is usually good at matching players to opponents from around the world. And when it can’t, you will face-off against a bot. The bots all have groan-worthy puns based on legion names (Late Night Lords, Emperor’s Niece, and so on) and can provide a good enough foe. While they lack the finesse to use all of the tactical cards to their maximum ability – zero-cost Tactical Brilliance which reduces the cost of one card by 2 for a turn confuses them – they’re generally OK. Some human players will disconnect if the match doesn’t go their way, that way, they do not lose ranking in regular battles.

Horus Heresy: Legions lives and dies on me being a Warhammer junkie. It is still one of the better GW licensed games that were given to an untested studio. Luckily for us, Everguild had a seemingly good game to reskin. I’m level 22 in the game now and it gave me the need to upgrade 40K Space Marine bikes with Death Guard bits to make them into Outriders in 30K. I already have most of the cosmetics I need. But with no friends to play Tactical Strike/Victory is Vengeance with and with no other Horus Heresy game out there, I’m likely to be grinding cards in the grim darkness of the far-but-not-that-far future for quite some time.