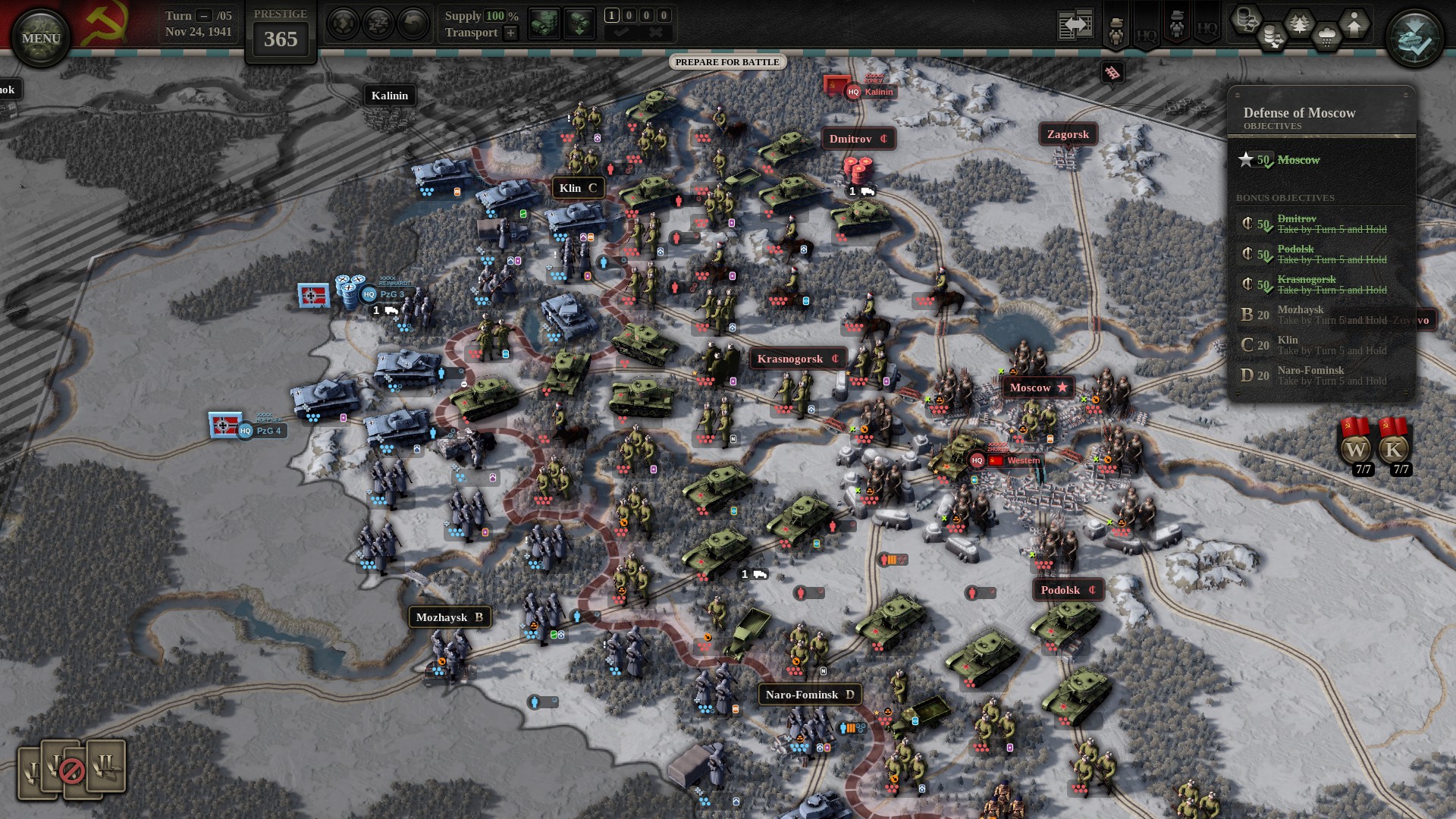 Up until this point, the DLCs for Unity of Command 2 focused on the German victories in early World War 2. They did quite a good job of portraying them as the real fights they were, and not just cakewalks as popularly imagined. Barbarossa was particularly good about showing how spread out and worn down the German forces became when faced with Soviet resistance and vast distances they needed to cover. Unity of Command 2: Moscow 41 DLC actually puts you in command of the Soviet forces that will stretch that attack to the breaking point – and then break it.

So yes, it’s October 1941. The Nazi blitz into Soviet Union saw major victories, but even major victories have their cost in men and materiel. By the time the ragged Panzer formations and tired infantry see the domes of Moscow, cold has set in. More than that, the defenses had been well-organized and reserves that Oberkommando believed did not exist have been brought in.  It’s time for a rude awakening.

But for the Unity of Command 2 player, it’s time to fight the war in the way they’re totally not used to. In the previous DLCs, the worst units came from Italy and Axis minors. Compared to the striking power of your German troops, they were almost a burden, best used for holding the line, not attacking. In Unity of Command 2: Moscow 41, you’re commanding soldiers closer to the loser Nazi wannabees in quality.

A lot of work goes to represent the affects of purges, smaller divisions, lack of materiel, and losses in Barbarossa. Your infantry divisions are weaker than the enemy equivalent. You can attach one fewer specialist. Your tanks aren’t that impressive either – this isn’t the Spanish Civil War, T-26s aren’t enough. The best you can do to stiffen your assaults is to use your the rare Guard units and add specialists ranging from NKVD to actual good tanks (T-34/76s and KV-1s) to the new 203mm guns.

Turns out, gutting your officer corps before a war is bad

But that’s not all! You’ll be commanding many diverse fronts during the Unity of Command 2: Moscow 41 campaign – many diverse fronts that don’t start with the ability to carry out suppressive attacks. This is what will eat your early points allowance – and specialists will eat what’s left. I barely had any for the support cards. Those are vital, since you won’t even get the CAS strikes you were used to when commanding the Nazi hordes.

What you will have, and plenty of, are reserves – and basically no units that carry over between missions. If your heart longs to carry out the divisional equivalent of waves upon waves of troops dashing themselves on an MG emplacement, you’ll have men to do that. However, that’s hilariously the worst tactic, since a German unit entrenched in favorable terrain will easily eat five attacks without flinching. You need those specialists, those cards, and those front powers.

Just a giant middle finger to Company of Heroes 2

It also does well to model a different kind of fighting than you’re used to. Previously, you were always undoubtedly on the attack, always dictating the tempo, rarely suffering from enemy action. Now, you have to defend as well as attack, and the enemy may have goals other than the AIs usual obsession to cut off your supply. That’s why the mandatory objectives in Unity of Command 2: Moscow 41 are usually the ones you already hold – don’t lose them! Taking anything extra is a sweet bonus.

Of course, not all missions will be the same and you won’t always be treated to enough reserves to blunt armored assaults by simply having too many divisions for their action point allowance. Remember, Stalin – the person that most Soviet military (and civil) failures tend to lead back to – ordered counter attacks as soon as Moscow was safe.

Moscow was safe, yes, but your troops were worn and tired. So you may be the one without massive reserves, forced to both contain the German forces, push them back, and then advance over the massive tracts of land. And what do you know, those missions can be dynamic as heck, as you first beat the active enemy forces – by entrapping and slowly strangling armored and motorized troops – and then start inexorably rolling over their defenses. That won’t always be the case, but it’s there.

The landing at Kerch also makes an appearance, and it’s very much its own thing.

As far as ahistorical achievements go in Unity of Command 2: Moscow 41, you’ll be able to relieve Leningrad right at the start of January 1942 or even destroy Army Group Center and turn Rzhev into a meat grinder – but only for the Nazis. Just play it well enough!

The DLC also comes with some nice visual details, like Guard units – both infantry and cavalry – getting those cloaks that video games are so fond of. Both sides also get winter versions of the troops as well.

All in all, I’m very happy about about Unity of Command 2: Moscow 41 DLC. The campaign might be shorter, yes, but it offers a lot of new experiences for the game. And it also signifies that we can expect good things if more get released. Who knows, maybe the spirit will move the devs to even go deeper into Asia…