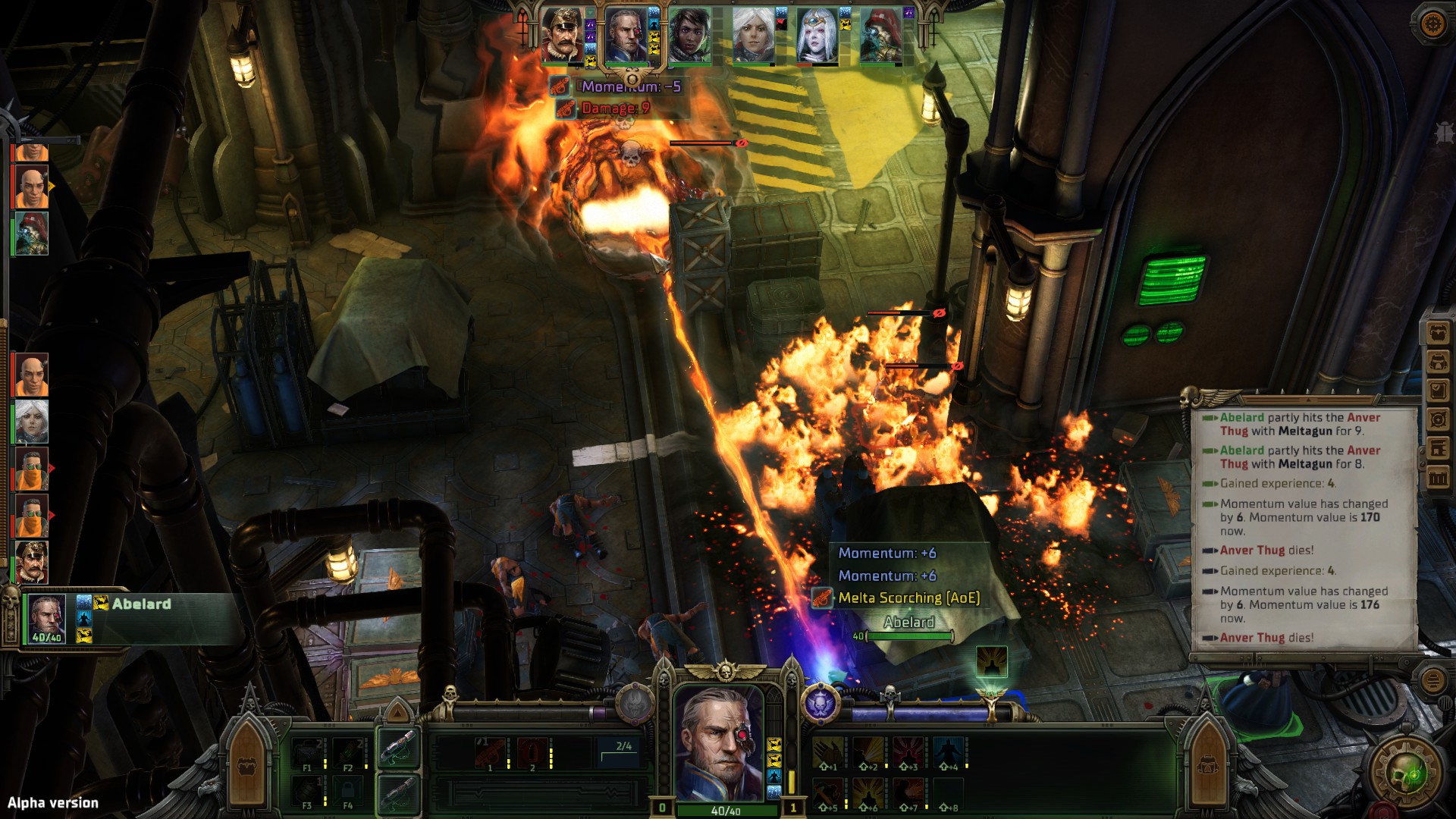 Fantasy Flight Games’ Rogue Trader TTRPG looked beautiful but was mechanically terrible. And that was only partially due to the Warhammer Fantasy RPG engine not being able to handle automatic firearms. However, with the license now in the claws of Owlcat Games, Warhammer 40,000: Rogue Trader the CRPG seems like it’s going to both look cool and play well.

In the game, you’re a newly minted Rogue Trader, having become one the way God(-Emperor) intended: your predecessor died in a dramatic, Chaos-involved way and left you the Writ of Trade. So you’re plucked out of your old life and thrust into the Koronus Expanse to rebuild the (now yours) trade empire, explore the wild frontier barely touched by the light of the Astronomican, and to solve whatever dark plot targeted your extended family.

Granted, Chaos conspiracy is one of the most boring ways to go about things for a 40K RPG, especially one set in the “seriously, here there be dragons” Koronus Expanse, but at least it’s not out-and-out “in the grim darkness of the far future, there is only Nurgle” once again.

The Omnissiah approves of naught but d100

Now, I haven’t played the Owlcat’s Pathfinder games – learning that Golarion is just a prison for some evil god soured on the setting long ago – but people generally regard them well. Plus, it’s a Warhammer 40,000 RPG and a video game version of Rogue Trader. Of course I’ll jump on that; I have always been mad that FFG’s 40K RPGs had all of the production values balanced by how few good game decisions they contained*.

And the rules-engine powering Warhammer 40,000: Rogue Trader seems to at least borrow elements from the old paper version, down to a d100 rolling merrily behind the scenes. It’s not a straight up port: the career path skill/trait/perk trees seem to be free from trap options and the combat is completely revamped. So that bodes well – even if my eyes glaze over every time a mouseover-popup for a skill explains that you get damage resistance of 2xTgh+Vit.

Combat system works generally well, with separate Movement and Action point pools. Except that you can’t Fleet-of-Foot it due to attacks immediately flushing your MP pool and characters are only able to attack once under normal circumstances. That said, RPG protagonists aren’t normal under any circumstances, and Rogue Trader-types are even less tainted by the touch of normality.

Thus, by combining all sorts of career (read: class) powers, warp trickery, and Heroic powers fueled by the Momentum mechanic, Sister Argenta, level 15, can turn into an absolute blender, delivering a level of carnage I’d say would be about right for a Tactical Marine. Too bad not all the powers are that exciting, with the Adept career – focused on studying the enemies to boost attacks against them – getting the bouquet of the most bland of all present.

Another neat thing about combat is finally solving the auto fire conundrum that vexes every TTRPG under the firmament. In Warhammer 40,000: Rogue Trader, all attacks that fire more than one shot fire in a fan or funnel: targets falling under the central line of squares are more likely to be hit than those in the shaded areas. This also means that friendly fire is very much an option – doubly so when a shot that the target dodges is liable to hit someone behind them.

Warhammer 40,000: Rogue Trader is going to make you work harder for your cheesy combos.

Killing in the name of- EMPS!

Also harkening back to the RPG is the initiative track that’s generated before the battle, thus giving your characters no guarantees of going first. It’s also built with clear understanding that battles in the game are going to involve more enemies than usual: Rogue Traders and their entourages are all hardened badasses, so many skirmishes will feature a lot of weaker enemies for you to pop in one hit.

But if they acted like normal enemies on the initiative track, the game would last into the Dark Age of Technology. Consequently, the weakest enemies activate as if unto newly discovered enemy clutches in XCOM, in groups of three.

Yet it’s the hyperviolence that makes the combat real fun. No synch kills for melee – and I doubt we’ll have them – but enemies are just waiting for the slightest provocation to pop into a fountain of blood and guts. Heads fly off, members get dis-, humans are reduced to naught but dripping viscera – the works.

And once time comes to collect loot, the Warhammer 40,000: Rogue Trader is still mindful of you being a Rogue Trader, a scion of the sky mobility. Sure, you could take those ten lasguns, ten axes, and ten flak vests that the gangers just dropped. But you’re not some wasteland wanderer hurting for caps. Unless such items interest you, you pack them into cargo. These packs of goods – ranged weapons, armors, heretical artifacts, etc. – can then be traded with factions for reputation points.

The rest of the trade system is reminiscent of what FFG tried to do. You buy with profit factor and it regenerates over time, indicating your vast wealth as a Trader, Rogue. Now, that doesn’t work cleanly yet – seriously, that medpack isn’t an archeotech relic, buying it shouldn’t even be noticeable on the ledgers, why do I have to wait for PF to regenerate – but hey. They couldn’t have implemented the FFG system of buying representing sourcing and delivering the goods, with difficulty based on planet and item rarity – you’d just save scum yourself into getting a Mastercrafted Auramite Force Tonfa and Legendary Breastplate That’s Actually Just One of The Emperor’s Pauldrons With Groxhide Straps To Make It Wearable.

Ooooh, who flies in a cathedral among the starts?

But not all is just shooting heretics for recreation and remuneration. You also get to explore dangerous places and talk to dangerous people. Some dialogue options in Warhammer 40,000: Rogue Trader are unlocked by having discovered rumors or other bits of information, others appear after succeeding skill checks in the background, and some actually give you the chance to fail. And the characters in this game are fairly talkative, both in dialogues and with your companions just idly commenting on the situation.

Good thing that even this early, quest design seems fairly decent, with some variety and choice baked in to keep interesting. An early choice is whether you arrive on Footfall with all the with all the pomp befitting your station or whether you’ll sneak in concealing your status. And this will impact how people will react when meeting you – folks are less likely to soil themselves at the sight of a random fancylad than in the presence of a bonafide Rogue Trader.

After all, there’s more to roleplaying a Rogue Trader than just waving fact wads of Gelt to buy the biggest chainsword. It’s via the dialogue and reactions that you determine if you’re a roguish yet pious servant of the Emperor, a profit-seeking memelord of the kind featured in every player story about Rogue Trader, a pompous murderous asshole, or any combination of the above.

Right, back to checks. Exploring the environment not only treats us with the droves of Imperial citizens of the kind Citadel miniatures studiously ignore, but also vast gothic environments. There will be some scattered loot of the usual “misplaced unlocked box that nobody bothered to loot” type but also awareness checks, one-time skill challenges to identify stuff or sift rubble, and traps. Some of those traps will have to be navigated as actual puzzles to avoid having all of your crew breathe toxic smoke while on a stroll.

But Owlcat is even braver than that, tackling what often trips up any RPG: space travel and space combat. The alpha guide admits that those are the bare inception, but you can see where they’re going. Space travel will have you try and navigate to uncharted systems in the safest way (unsafe routes can lead to outbreaks of heresy and daemons in your bedroom), and then fly around scanning planets, fighting pirates, and setting out on dungeon delving. Thus far, it’s devoid of Mass Effect scanning minigames. And going by the promised features, you’ll even have colonization and colony management.

Space combat is as turn based as the main game is, but it remembers that ships don’t stay stationary. You’ll have to deal with constant movement as well as the facings of your weapons – and, somewhat a-Battlefleet Gothic-ly, facings of your shields. Each member of your team grants you at least a power to use in the fight, so they all feel important.

And that’s one of the main strengths of CRPG over TTRPG, isn’t it? There is no friction in having one player technically be THE Rogue Trader and others his underlings – there’s but a single player. You are also experiencing fewer pressures to make ship combat somehow not sideline social characters or dumb barbarian swordsmen – you don’t have a group of players to keep entertained, the Shadowrun hacker issue doesn’t exist. And yet still they managed to work in some use for a Rogue psyker into your shootout that spans tens of thousands of kilometers.

For the love of the Emperor, gild those skulls!

OK, this preview is going a little long, so I’ll do a quick run through the stuff I always mention in the end: visuals and audio. Warhammer 40,000: Rogue Trader looks nice zoomed out and maybe a little less so when zoomed in. So that’s engine stuff; the designs themselves are good. Owlcat is really running wild with the 40K aesthetics, giving us gothic space stations filled with shanties, grandiose spaceships, and more. They’re even going for armors and weapons that will be correctly reflected on the characters. On the other hand, there are some funny issues like monocles, classed as helmets, removing the Navigator’s third eye, or Argenta having the power armor back pack despite not wearing power armor.

As for the audio… the soundtrack may not slap as much the one in Warhammer 40,000: Mechanicus did, but it is fittingly epic. The weapon audio is great, from lasgun pew-pews to the dry barks of the bolter. The only really objectionable bit is the party’s barks. They’re long and they’re meant to be funny. But how funny can it be when Pascal the Techpriest says “it breaks my heart to see technology so mistreated; this is a metaphor since my cybernetic heart replacement can handle great stresses” for the fifth time that day?

Once you get at that stage of grief where you’re almost OK with the idea that nothing decently playable will come out of the lavishly produced FFG 40K RPGs – doubly so since Geedubs was such a jilted lover it killed the Death Watch base from the RPG of the same name dead – it’s very strange to actually glimpse a glimmer of hope. For those who have developed a Pavlovian response to Calixis Sector getting mentioned, Warhammer 40,000: Rogue Trader is that wafting flame.