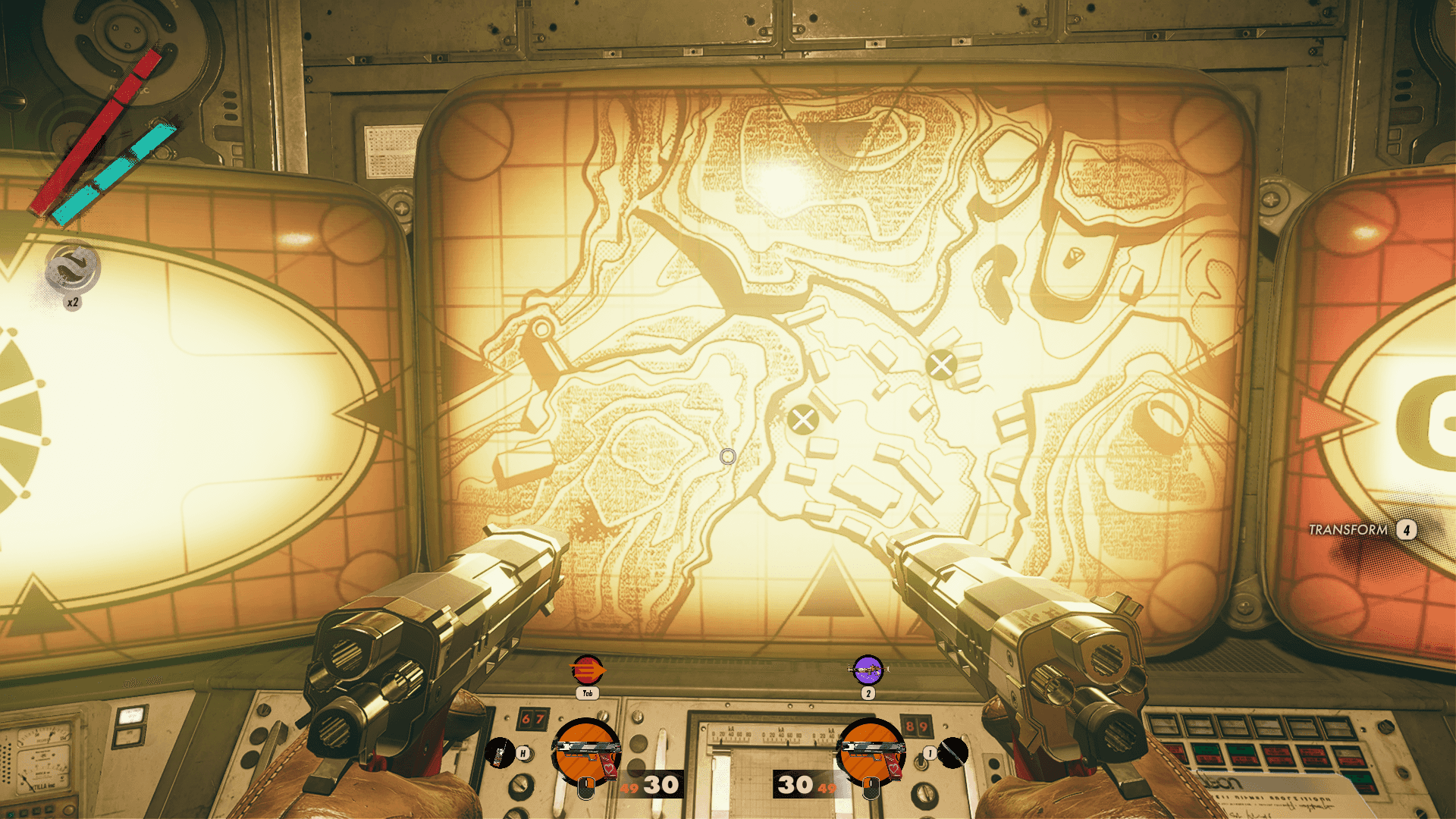 We want our FPS games to be more. We want them to ooze style. We want to break up violent action with worldbuilding and wonder. We want to not merely run around, gun in hand, but also jump, leap and teleport. We may even desire a gun that makes headshots explode. We desire a game called Deathloop.

Deathloop is Groundhog’s Day as made by folks behind Dishonored. Our protagonist Cole doesn’t know anything – about himself, the island of Blackreef, or Julianna. What does learn pretty soon is that Julianna wants to kill him, the Eternalists stuck in the loop on Blackreef want to kill him, and he wants to break the loop. Now, it would be an impossible task to accomplish if the enemy could remember what you’re trying to do – but they can’t. It’s only Colt and Julianna who hop, skip, and repeat the endless day with any recall.

To talk mechanics, Blackreef is split into four regions, the day is separated into four segments. As the day advances so do the regions march forth in their own little narratives. You can visit one region per segment of the day. Once the fourth one finishes, the loop starts anew, your failures erased. Your victories? Well, the greatest treasure here is knowledge – knowledge how to break the loop – and that can’t be taken from you. Guns and upgrades? Eventually, and with some effort, they can be made to stick around as well.

In essence, Colt is like you, the Deathloop player, and the Eternalists are like NPCs in a video game. Colt can die, but he then resets to his “save point” – the morning of the day. He may lose his stuff between “saves,” but he/you remember what you did wrong the last time – and you endeavor to do it differently. Colt’s ludonarratively gaining metagaming knowledge the same way you and I do by dying and loading saves. Eternalists, on the other hand, are, in universe, like your Call of Duty NPCs: load up a save/loop the day, and they won’t have learned a thing from your last run-in.

Now, Deathloop isn’t a new game by any means, which means that people already have opinions. And one opinion I heard often is that the tutorial is too long. Having played the game myself… Yeah, it is too long! Hours pass before Deathloop lets go of your hand. Far too many hours! Let me live my endlessly repeating life, damn it!

However, having finished the game, I can say that there’s so much going on in the game that you are likely to forget that tutorial was ever there.

In a stunning twist, a AAA game some trust in the player

It’s a fascinating thing, how not-entirely-linear the game is. Oh, of course, the gameplay is an arrow aimed towards breaking the loop, and that will require accomplishing a certain set of goals. Some regions or objectives are only available at set times. But you can choose to tackle your tasks whichever order you like.

You may meticulously plan what you’ll do each quarter of the day, or skip them to dip in the one most interesting to you. Either way, you’ll return to the same time and place next morning. While the loop persists, it doesn’t matter.

And neither is Deathloop paranoid that you’ll miss things. Almost to the final hours of the game, I was discovering new things, new lore, and even new questlines. No map markers or other indication that they’re there – just stumble onto new quests, sidequests, and items by being perceptive, curious, taking the path less traveled over the roofs. As a time loop game, you can of course flip the script in the morning to see if something changes in the afternoon, and use that information to your advantage tomorrow.

Maybe you should let an Eternalist live so that they’d bungle into something interesting in the evening. Or maybe turning the power off in the morning will make some areas more accessible in the evening. Go on, experiment!

This narrative framing of death (in the loop) not mattering (except for when you die-die for real, which resets the loop) is , potentially, what allowed the Deahtloop devs let go of the worst impulse they had when making Dishonored.

If you don’t know, Dishonored thrust you into the whaleoilpunk kingdom assassination world as an assassin, armed with ingenious gadgets and otherworldly powers. You even had a very trademark collapsible sword.

Except that Dishonored tied your kill count to how bad the game ending would be.

Sure, the city is dying from the plague, but it’s you, you who leave guards gushing from their neck wounds, who’ll tip the scales by giving the plague rats more corpses to eat. Fuck you for daring to use the powers, the grenades, and other violent tools the developers gave you for their purpose. In fact, fuck you for even wanting to kill the villains of the game, your targets as an assassin. To assuage your guilt, we give you alternate means of disposing them.

That’s why Dishonored gives you a way to not have to dirty your hands with the blood of a female villain. No, you can make the ethical choice, one of kidnapping and presenting her to an obsessive fan, who promises to take her and lock her away. “You the man now, dog,” Batman tells you as he locks up Joker for him to once again escape and gas an orphanage with Smilex.

But with Deathloop, the devs can feel easy about not going for the Deus-Exian critic treat of “you can finish the game without killing!!!” Shoot, stab, explode and do all kinds of other fun stuff to the Eternalists. Doesn’t matter, they’ll pop up again the next day. Even Jullianna – who the players can control as a Dark Souls-type invader – will wake up the next day and be inhabited by another pubbie hungry for your blood.

The funniest way a Julianna died in my game was jumping off a trampoline that Eternalists were using for a deadly game of jump through the hoop. I guess the other player thought gravity doesn’t apply to invaders.

But the fun doesn’t end there. Deathloop is a beautiful game, with the island’s regions bringing their own different vibes that that change depending on the time of the day, providing new takes on the areas you’ve gone over before. And that’s all fine and good, giving you different challenges, arenas, and details of just how badly underprepared the Eternalists were for their endless bliss.

Outside of beautiful retro designs clashing with the stony island and rusting military equipment, what sets Deathloop apart is that enemies always remain a threat. An individual Eternalist is fairly easy to take care of – just shoot them in the head from hiding. But no matter how far you advance, no matter how decked out in Slabs (magic powers), Trinkets (magic passives) and weapon upgrades (magic passives for guns) you are, a crowd of Eternalists will shoot you down. Through the game, you can get, at most, 200% increase in health, but that takes one of your four Trinket slots, and you can only wield two Slab powers at a time. What cool stuff do you sacrifice for that?

Don’t worry, upgrades can be freely switched out between regions.

There is no secret level scaling, no running into an Eternalist identical to the ones you’ve been killing since the first hour in the game, but this time, he’s of a higher level than you and thus immortal. No, while some of them do get boosts some times, they’re always dangerous, and you can’t get sloppy or careless.

Deathloop does have guns rated in rarity, but that’s how it begins and ends. It’s not Vermintide with their weird power ratings or the loot diarrhea of Destiny. No, a purple Limp-10 SMG is better than a gray LIMP-10 SMG because it has three upgrade slots instead of one, and possibly some fun bonus (like being silenced or causing bleeding on top).

New stuff is better because having more upgrade slots is better, and because a shotgun that makes dead enemies explode is obviously better than the one that doesn’t. Unlike in loot grind games, the reason to upgrade, to abandon your old weapon is always obvious, and always more satisfying than “gun goodness number go up.”

Speaking of satisfying: the audio department did their job well. The game music is great and the in-universe music is better. The sad songs you hear really stick around with you, and so does the enemy chatter. And hey, you might just hear something relevant for your adventures…

Go play Deathloop. It is Dishonored with guns and it is very good. It is resolutely stylish. It invites you to have a great time. Shoot people. Discover secrets. Unlock outfits via multiplayer. Have a fulfilling day.