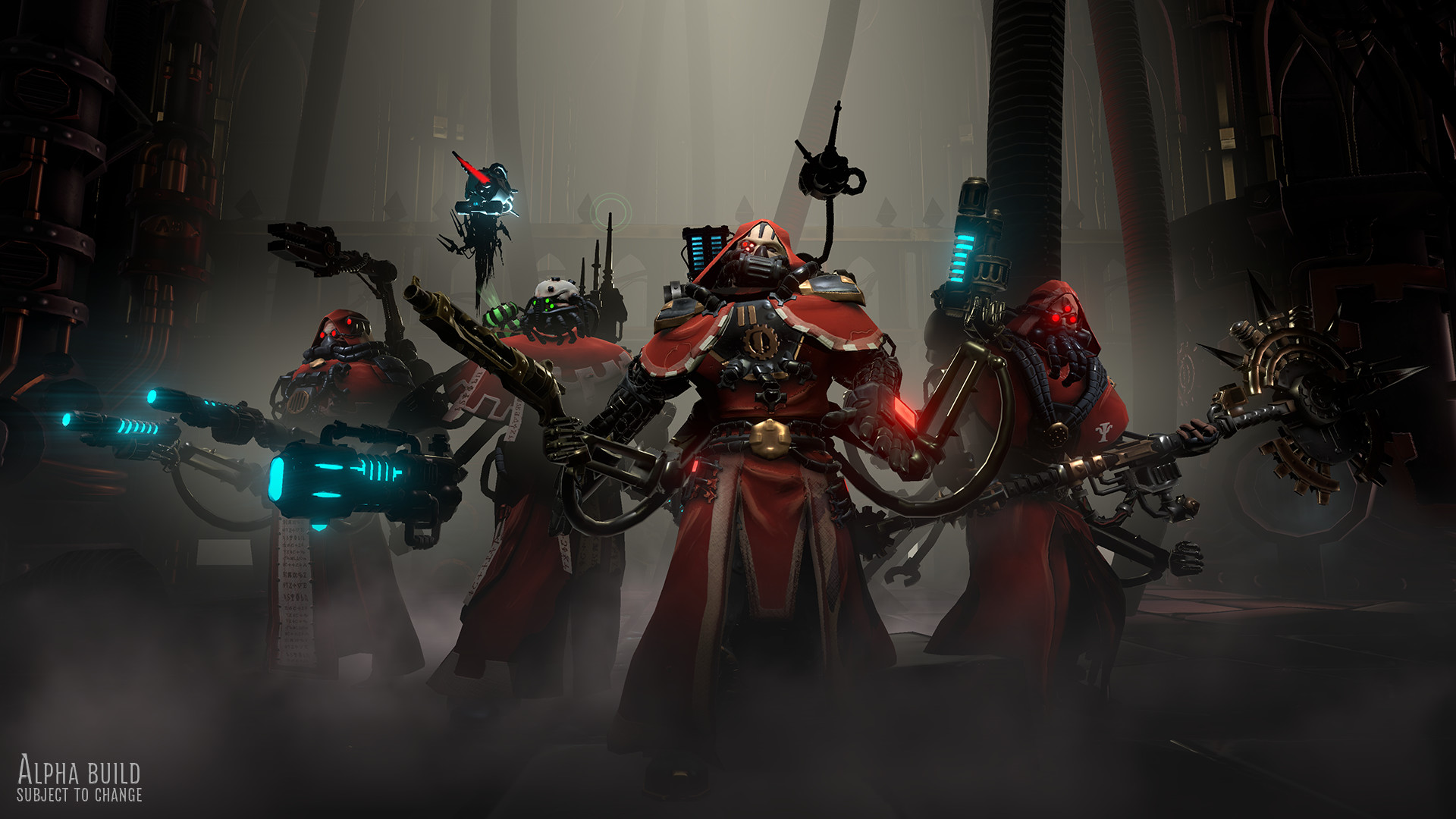 When Warhammer 40,000: Mechanicus was first announced, I had zero faith in it. Sure, having a game where you control the Techpriests of Mars is cool. However, facing off against a single enemy race – Necrons, of all things – seemed to be boring. Glad I was very, very wrong about that!

We start with Magos Rhesak, who lead an expedition to the Imperial colony of Silva Tenebris. He died, but not before sending out calls to his Mechanicus fellows. This led Magos Faustinus to mount an expedition to find out what happened. Unfortunately, Warp transit was less that gentle and the ship arrived in a sorry state. Meanwhile, Silva Tenebris turned out to be an awakening Necron tomb world. Faustinus now has limited time before the surface is swarming with the soulless robots – and his companions are offering multiple (and not always compatible) solutions to the problem.

One of the more unique aspects of the game lies in the campaign mechanic. You have a limited amount of time before the tomb awakens. Each of your missions advance the awakening a few percent at a time. That’s why you’ll want to be fast both in the overall mission map (where you move between nodes) and in the tactical maps (where you kill the alien). If you are not finished with Silva Tenebris by the time you reach 100%, well… Just know that it’s hard to finish a mission with less than 3% in your pocket.

The missions themselves are given by Faustinus’ associates. Both the other Magos and accompanying Skitarii have different opinions on how to proceed. That why you’ll also be advancing their agendas depending on which mission you take. However, your course will also be guided by the rewards – in weapons, gear and upgrades that are outlined in the mission description. Anything you can find in the field is extra. Praise the Omnissiah, there’s no crafting nor research in this game.

Adeptus Mechanicus and Their Many Guns

However, you will still have guns and gear to outfit your crew with. And by “crew”, I mean Techpriests. Faustinus isn’t going in himself – but he knows a few guys more expendable than he is. The Techpriests you control are fairly fresh and you’ll be kitting them out as you go. Once a weapon is unlocked, you can give it to every priest under you command – there’s no stringent loot management. Instead, your priests have limited capacity for augmentations (strangely enough, this includes your hand-held power-axes). And that capacity is increased by leveling up – paying blackstone shards to unlock either an ability or augmentic in one of five tracks.

Said five tracks allow you to specialize your priests, like making them either melee or ranged combat focused, giving them powerful repair or support abilities – or even buffing your regular troops. Of course, some of the abilities are super useful no matter which way your priests go, and the same can be said for some of the augmentics. Luckily, you’re not locked into a single tree, so dipping into the others isn’t that bad.

Me, My Friend and a Few Lobotomized Criminals

So when you’re about to head out, you have to pick your team out of your named techpriests and nameless support troops. The latter don’t collect experience and can’t be kitted out. However, troops will always be there to fill out empty slots as you won’t be getting additional techrpriests that often. Troop abilities, extremely limited as they are, are still powerful. They are upgraded via mission rewards rather than blackstone purchases. And believe you me, there’s a world of difference between a level 1 Skitarii Ranger Alpha and a level 3 (maximum) one (other than them being really cool). It also costs blackstone to deploy troops (unlike techpriests), but that only matters in early levels… and servitors are free, anyways.

Once you’re in the mission, you move from node to node. Each can contain a single-page text adventures (each offering three choices), Necron tech ports (hope you remember which of the randomly given glyphs does what) and combat encounters. The text adventures are excellent in both building the atmosphere and being nearly-always mission-related. The right choices in adventures can award you loot, push you up the initiative track, heal your units and so on. The wrong ones… well, be ready to see the in-mission awakening counter go up.

Now, combat! It takes place in Necron tombs, and each of the five complexes has its own tile sets (or, rather, maps). You’ll also have a very good idea of what you’re facing, as your mission description will outline what kind (but not what number) of enemies will appear in the mission. Combat is turn based and everyone acts according to his or her place on the initiative track, though I have no idea how it is determined. Unlike in, say, XCOM, your characters can move their full movement allowance while doing as many stops as they like and even using every weapon and ability in their disposal.

This Does Not Compute

However, the last bit is easier said than done. You see, in Mechanicus, a resource called “cognition points” exist. You collect it from certain obelisks and slabs, and from defeated enemies (of course, those are just the basic routes) and use it to move further you should or use powerful gear and abilities. Of course, it’s one of those things that’s mostly important in the early game, as you’ll find ways to generate more and more cognition later.

Cognition is also used to bring in your non-named reinforcements into tactical battles. However, they’re not endless, and if they buy it, you have to finish the mission without them.

Anyway, a servo skull accompanies each of your priests. And they are at an interesting intersection of battle mechanics. For one, a skull can venture out to collect cognition from any source. On the other hand, the skulls can scan enemies, revealing their health points and armor stats.

And boy do you want to know those stats: with no cover system existing in the game and all hits being guaranteed, armor is what stops damage. There are two types of damage and two matching types of armor. Most simple enemies will only have armor against one type of damage, but both the type and number is randomized in the missions. This means that you can’t just memorize what type of armor a Necron warrior has: it can be different every time you encounter one.

This Cannot Continue (To Not Compute)

That raises various tactical considerations for you. Most weapons deal energy-type damage, while melee is exclusively physical. However, you can overcome armor with high damage (of course, it depends on how much damage a weapon does), certain abilities, Machine Spirit attacks (weapons charge up with use, thus adding an effect to a single attack), canticles (single-use abilities that effect the entire team, you can use three of those per battle) and so on.

The big conundrum is Cognition Point use versus your damage types. You need to use the right weapon on the right target and keep an eye on your resources. This mechanic sorta loses relevance in the midgame, but tougher enemies in the end make it matter again – mostly. At that point, you can probably refill your cognition gouge a couple of times a turn, thus making “avoiding friendly fire” more of an issue than matching armor and damage.

To be fair, my perspective is a little skewed from getting a Heavy Phosphor Blaster (the heaviest of Phosphor weapons, which reveal enemy stats on hit) early on and straight up vaporizing two Necron Warriors and heavily wounding an Immortal on its first deployment.

At this point, you can start wondering how good or bad it is that the game gets easier as you advance. On one hand, some will vouch for XCOM’s ever-increasing difficulty and you playing catch up. On the other hand, it’s nice to see that some games recognize that you are getting better and more powerful. After all, part of it is learning the system, and its nice to see it pay off (unlike in TES titles, what with their rubber-banding enemy levels).

It also has to be noted that your Techpriest and troopers don’t get that tougher. You can only stack so much armor via unlocked bionics. Most of your resistances come from temporary buffs, which need to be managed carefully. You’re not swimming in HP, either. So while your weapons do become more powerful, a few missteps can leave you down a techpriest – something that is very bad in the middle of the mission.

By the way, since we’re on Necrons: reanimation protocols are in the game. This means that a killed Necron collapses into a pile (unless it was a critical hit or you killed a Kanoptikon creature) and starts a reanimation countdown. Moreover, with higher levels of (in-mission, not global) awakening, that countdown is shorter. Of course, you only need to deal 1 point of damage to make it phase out for good…

Nevertheless, no matter what happens, the game is fun to play because of the strength of its writing. The Techpriest chatter is amusing and Faustinus is a very cool character. He might have isolated his emotional cores, but he still draws on them for inspiration and isn’t callous when it comes to the Skitarii. His comrades may be a lot different in this regard, but they also have their own quirks and patterns of speech.

You can spot an interesting design decision in the voice acting. For one, the Techpriests don’t get actual voice acting: they all have different “Sim-speak” voiceovers that give an impression of how they talk. Prime Hermeticon, the one who’s tasked with hunting down the Necron leaders, loves speaking in hunting metaphors and her voiceover is hurried and mechanical, make you feel her temper that much better.

In contrast to that, the soulless Necron lords, the bosses of the game, are fully voiced. These xeno machines, who have long abandoned whatever passes for their humanity – even their souls – are, in a sense, more human, since they speak like humans. Naturally, it’s a question of developer resource allocation: the Necron lords speak only in the missions to kill them, so it was much cheaper to do it.

While Warhammer 40,000: Mechanicus isn’t a game that’s too flashy, the visuals are handled masterfully. Sure, there might be some dearth in animations – the servitor uses the same one for boosting and attacking, while both Skitarii Rangers and Vanguard use the same rig. However, no effort was spared when it came to modeling stuff, and each upgrade on your techpriests is meticulously be seen on the model. Oh, and the tombs themselves are very characterful.

If there was a bit of criticism for the art department, it’s the uneven quality of Techpriest portraits. For example, Dominus Khepra, the leader of the Skitarii forces, was given a much weaker drawing than Faustinus or Rheus, the logistical specialist who probably looks even better than our main character.

All in all, Warhammer 40,0000: Mechanicus is an amazing game and one of the strongest entries in the Games Workshop video game lineup. It deserves to stand up there next to Dawn of War 1 and Space Marine. I just hope the studio is entrusted with more projects in the future. For example, Chaos Gate could use if not a real modern remake, then at least a Resident Evil 2-level uplift.