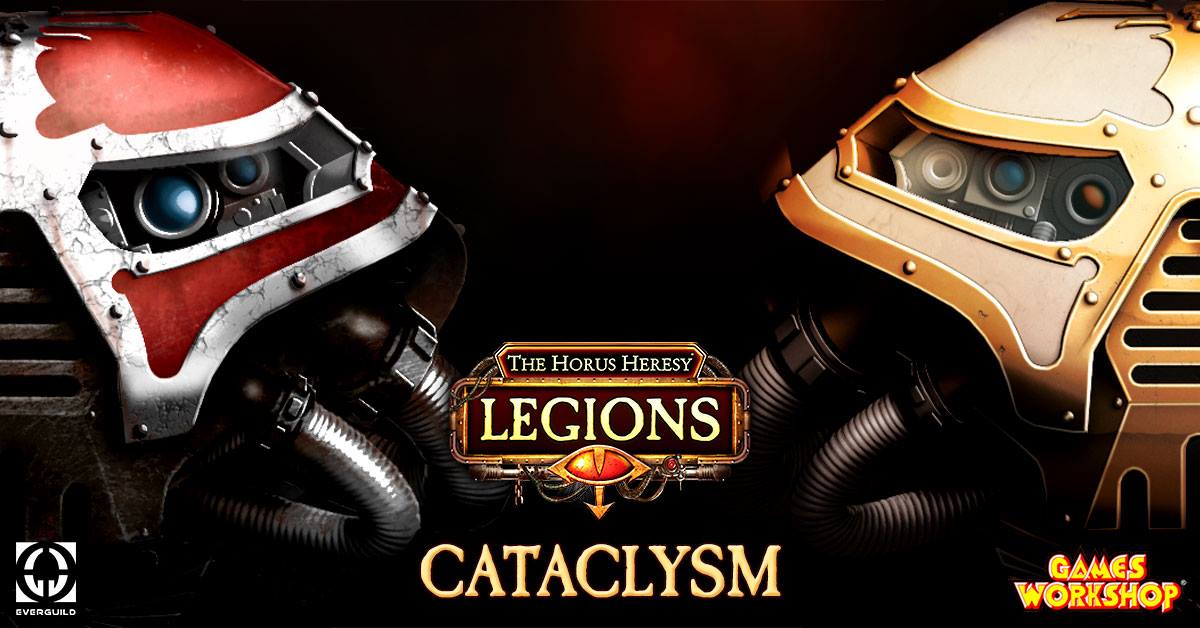 As a person who steadfastly refuses to engage with social media, I was surprised by the new event on Horus Heresy: Legions. Usually, it’s just regular card games (not on motorcycles). But in Cataclysm, we get to play with Titans in a way we haven’t played before.

Unless you’re into Adeptus Titanicus, that is!

We already had one event where titans and tanks fought on the battlefield of Istvaan V. However, it was just like any other match up, albeit one that introduced us to the Siege mechanic. This time, everything is different.

Sure, you can recognize the ability description, the Initiative score and the fact that the unit doesn’t have an attack score. But what are those other things mentioned above the ability?

Those are your weapons, baby.

The weapons appear as unit cards on the field! They count as Warlord for targeting purposes, but other than that, they act identically. So what do they do?

Punching Titans For Fun and Profit

Much like the torso (which has Siege missiles – perfect for stripping shields/killing trash troops), their attack abilities are Siege… or on some other cool down mechanic. See my power fist? It stuns the target – and itself. The fearsome-looking chainsword on the enemy titan? It gives itself Can’t Attack after attacking – and it has a 2E ability remove that condition from itself. The melta guns are Siege 3, deal 6 damage to target and 4 to adjacents.

So you see, healing-shenanigans aside, you won’t be using your titan’s fiersome might every turn. And with some luck, you will be stunlocking the enemy weapons with your power fist.

For while attacking an 8 damage chainsword is suicidal, you have to pay attention to the Void shields. It’s 2E reusable (!) card that gives Shield to a part of the titan. So if you have the E, you can shield your power fist, smack the enemy chainsword, then Shield it again. Chain those stuns well and the enemy won’t be able to melee you!

Oh, and one more thing about weapons: they have Meltdown. When a Titan weapon is destroyed, it blows up, dealing 2-10 damage to adjacents. So while your trash troops are likely to get vaporized, it’s the damage to your torso that’s the stinger. Well, that and the loss of weapon.

The titan clash mode is amazing and I hope the devs find a way to make it usable past the event. On the other hand, maybe we’ll get so sick of it in two weeks of playing that we’ll beg for the event to end.

You Got To Pimp Your God-Machiiine

Other new changes come for boxes and cosmetics. Observe:

All the card crates – except, oddly enough, for dailies – are now in the ye boring Card/Cosmetic crate tab, and you don’t need to tap them to learn what can be inside. I guess that really confused some players before – hence the change.

Now you can switch you cosmetics view from your owned cards (and tags, and quotes) to missing ones. That’s how I found outthat I already have basically every card back I need (except for Night Lord and Salamander Rhino doors) and nearly all of the quotes.