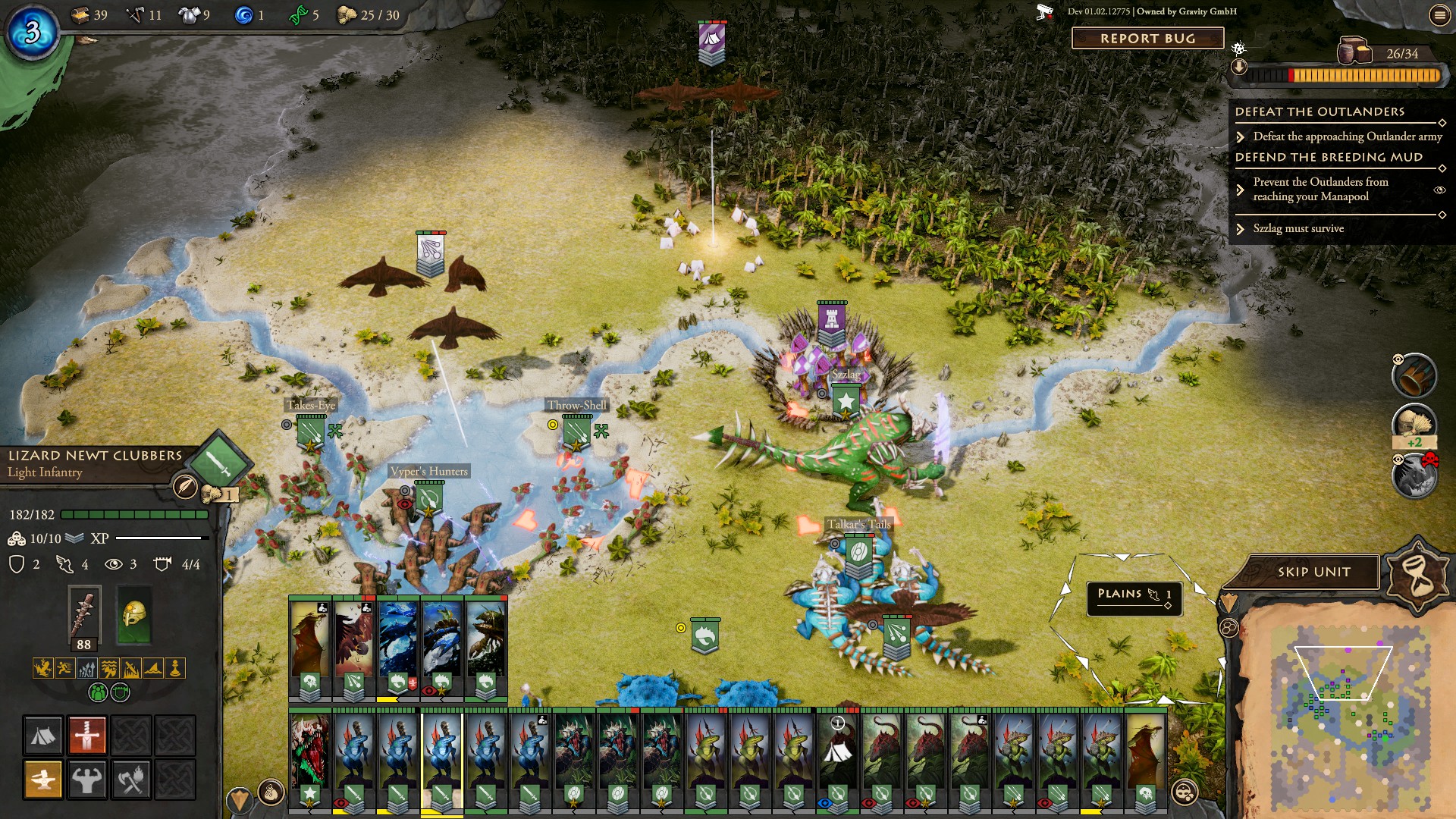 Unfortunately, these are not the mysterious and highly-civilized Lizardmen of Warhammer Fantasy. No, these beasties live as a bunch of tribes in the Broken Isles. It’s their way to kick out the children out of the tribe once they get old enough to fend for themselves. They can die as newts, or fight, kill, eat, and grow into ever larger, bigger forms. This is the path set before Szzlag. Not yet the Devourer seen in the main game, he and his sibling have to survive before even getting a chance at making their mark on history.

He’s just a poor newt from a poor family

Evolution DLC not only gives us the Lizardmen as a multiplayer faction, but also a campaign dedicated to these beasts. Granted, the game itself admits that the campaign is on the shorter side, but it is quite different from what we’ve seen before. And that’s not just because you’re given a fairly free hand to pursue the strategic map objectives in the order you want!

Usually, Fantasy General 2 bids you to guard your units like your eye. After all, they swell with power and endurance as they rise in levels. Some of them might have names that harken to the start of the campaign. They might have skills you’ll never have access to again. And yes, you may have already invested precious resources to upgrade them to new forms. With that much at stake, even the loading screens bid you to save often!

Not so with the lizardmen campaign. For you see, while you won’t lack weapons and armor, two of the upgrade resources you’ll loot aplenty, you’ll lack magic. But if you can’t loot them, and if you can’t buy them, then how do you get magic?

The myth of clean Empire

By throwing wave after wave of bodies at an objective, and seeing magic leak out with their blood. If you don’t let some newts die on the field, you won’t have the magic to evolve the others to stronger, mightier forms. The only upgrade path that doesn’t need it produces shell throwers, your archer equivalents. Archers aren’t frontline troops, and they’re as squishy as any other newt.

Still, Evolution DLC makes sure that you have plenty of supply to bulk out your forces with sacrificial newts. And if you’re as enthusiastic by looting every tomb, ruin, and shipwreck as I am, you’ll be flush with funds for mercenaries. You’ll have enough settlements to buy more newts during the mission as well.

It took me some time to catch up to this, so I went into the last scenario with a little more than 2/3s of my available supply used. The troops I had were all hardened killers, equipped with the best gear, bloated with power, and upgraded to the end of their unit trees. Still, it wasn’t a particularly easy fight.

So, how do the lizardmen fight? A lot of it you’ll have experienced long before Evolution DLC. The lizardmen are extremely fast in water and can move into the depths to escape your reach. This freedom of movement in the campaign, where lizzie controls the waters feels extremely freeing.

But you probably remember two more annoying things from fighting lizardmen: their weapons and their tactics. Most of the lizardmen have magical weapons, which ignore armor and are resisted by morale (which tanks once your front line gets eaten by an armored dinosaur). So they can hit pretty hard, and once your troops start wavering, they’ll hit even harder.

No Slaan around these parts

And if you try to hit them back, all but the biggest lizardmen units have a 33% chance to retreat once per turn. This is especially great with skirmishers, who get to throw their javelins on overwatch before scooting away. And unlike regular human skirmishers, they can retreat into deep water!

Granted, Evolution DLC doesn’t just give you a bunch of lizards. The unit tree, while not as fleshed out and exciting as the for the other two factions, is fully realized still. Meaning you have your siege monstrosities as the pinnacle of the crab unit… and thunder crabs as a very nasty first upgrade. Those guys rarely ever use their melee attack because they can spam their AoE magic grand slam. All in all, all crabs are great, while the flyers – the dragon branch of the skirmisher path – only have two versions: good and better.

All things considered, Evolution DLC is a fun boost to Fantasy General 2. I’m already fairly in love with basically everything the game does. This not only adds a new faction, but also gives you a campaign that’s starkly different from the rest. Is there anything like that’s left in store? Well, who knows. There’s always the option of some unseen fantasy race invading from across the ocean!