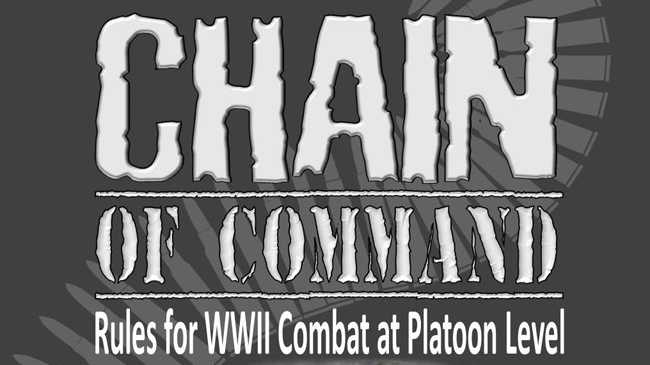 Chain of Command is a platoon+ sized WWII skirmish ruleset produced by the famous Too Fat Lardies. It’s basically the best WWII ruleset out there. So if you have some Bolt Action miniatures collecting dust, or if Flames of War 4e has got you down, you can use your toys to play a very good game. In fact, those with 15mm manz will get the best experience. However, Chain of Command has several quirks, with the activation mechanic being the biggest/best one.

Here’s how Something Awful forum’s poster Illor explains it while arguing that CoC is a very solo play friendly game:

Absolutely. Here’s the thing with Chain of Command: you never know from one phase to the next a) which of your units you’ll be able to activate, and b) which side will go next. Because of these things, it’s a great solo game, because you can play both sides without knowing what “the enemy” will do (or be able to do) next.

You’ll lose a little bit of the magic of the patrol phase (although I’ve found that simply walking around to the other side of the table does wonders) and you’ll lose some of the surprise of not knowing what supports your opponent has until they hit the table, but these are pretty minor compared to the game-play itself.

For those who aren’t familiar with it, here’s how Chain of Command works in a nutshell: You have a set of “Command Dice,” usually 5 in number (although this can get decreased as your force gets close to breaking). At the beginning of your player turn (called a “phase” in CoC, because “turn” has a very specific meaning in-game), you roll your dice.

* 1s can be used to deploy or activate any team-sized unit, be it a stand-alone unit like a mortar team or PIAT team or a sub-unit within an infantry section/squad (e.g. the BAR team that’ part of a standard US infantry squad).
* 2s can be used to deploy or activate a full squad/section.
* 3s can be used to deploy/activate Junior Leaders, who are section/squad leaders in your force. When activated, they can use their two “command Initiatives” to do stuff, like deploy/activate their unit, rally off Shock, put guys on overwatch, get them to lay down covering fire, or chuck some grenades. As a side note, most armies also have a “National Characteristic” that is powered by CI use. Junior Leaders can only affect their own section/squad.
* 4s can be used to deploy/activate Senior Leaders, who are your platoon commanders (generally lieutenants and platoon sergeants). They have more Command Initiatives and can use them on any unit in your force.
* 5s rack up “Chain of Command” points. When you get to 6 of these, you can do cool stuff like spring ambushes, interrupt your opponent’s phase, end the turn (which has important game effects like stopping mortar barrages and clearing smoke), relocate a sniper, move a Jump-Off Point (the places from which you deploy your troops), or skip having to make a “Bad Things Happen” roll to limit losses to your Force Morale (dropping the opponent’s Force Morale to 0 is the way to win most games of CoC).
* 6s dictate the player order. If you roll one or fewer 6s, you opponent will get the next phase (i.e. normal turn order). If you roll two 6s, you’ll get this phase and the next phase. If you roll three 6s, it ends the turn (after your phase is complete) and you get the first phase of the next turn. Four or more 6s does all of the above, but gives you a full 6 “Chain of Command” points and incurs a random event (like a sudden downpour or a building catching on fire).

You can combine dice up to a 4 (for instance you could combine a 1 and a 2 to activate a particular Junior Leader), but you can’t split dice.

So when you grab a handful of dice, you literally have no idea what’s about to happen. You may desperately want to be able to activate your Sherman to dump some HE into that stone barn from which a German MG-42 is spitting out heinous carnage, but if you don’t have any 3s, you’re boned. I guess the loader is having some trouble getting the next shell seated, sucks to be you. You may have a great plan that goes right out the window when your “opponent” is suddenly the recipient of the wondrous beauty that is the “double phase” (meaning you get to go twice before your opponent can act). And that’s the joy of CoC – both sides are constantly reacting to a fluid, unpredictable situation. Both sides are doing the best they can with what (limited) resources are available to them right now. You are always put into the position of making hard tactical choices – do I use that 1 and 2 to activate my 2″ mortar team and that infantry section on my left flank, or do I combine them into a 3 to activate the Junior Leader of the infantry section on my right flank to rally off a little Shock because they are desperately close to getting pinned down?

Another aspect of it that’s really fun is that movement distances aren’t fixed. When a squad is activated, it can stay stationary and fire at full effectiveness, move “tactically” (essentially crawling) at 1D6″ but getting better cover (no firing), move 1D6″ at a walk and fire at half effectiveness, move 2D6″ with no firing, or sprint 3D6″ but take some Shock in the process. So yeah, you might want to sprint across that field. It’s only 10″. Go for it! Oh, shit, you rolled a 5 on 3D6? Whelp, I guess those Germans manning than machinegun were quicker on the uptake than you hoped, and now they’re going to sauce your dudes in the open. Uh, oh, looks like your clever plan is the first casualty! You’d better get some of your other units to throw smoke and/or lay down covering fire in your next phase, friend.

Actions in CoC are all about your force not quite doing exactly what you want them to do, and always being forced to make tough decisions about how you’re going to allocate your resources. You’re never in complete control of the situation, which most veterans who’ve seen combat say is pretty much spot-on. Like I said, it’s magical.