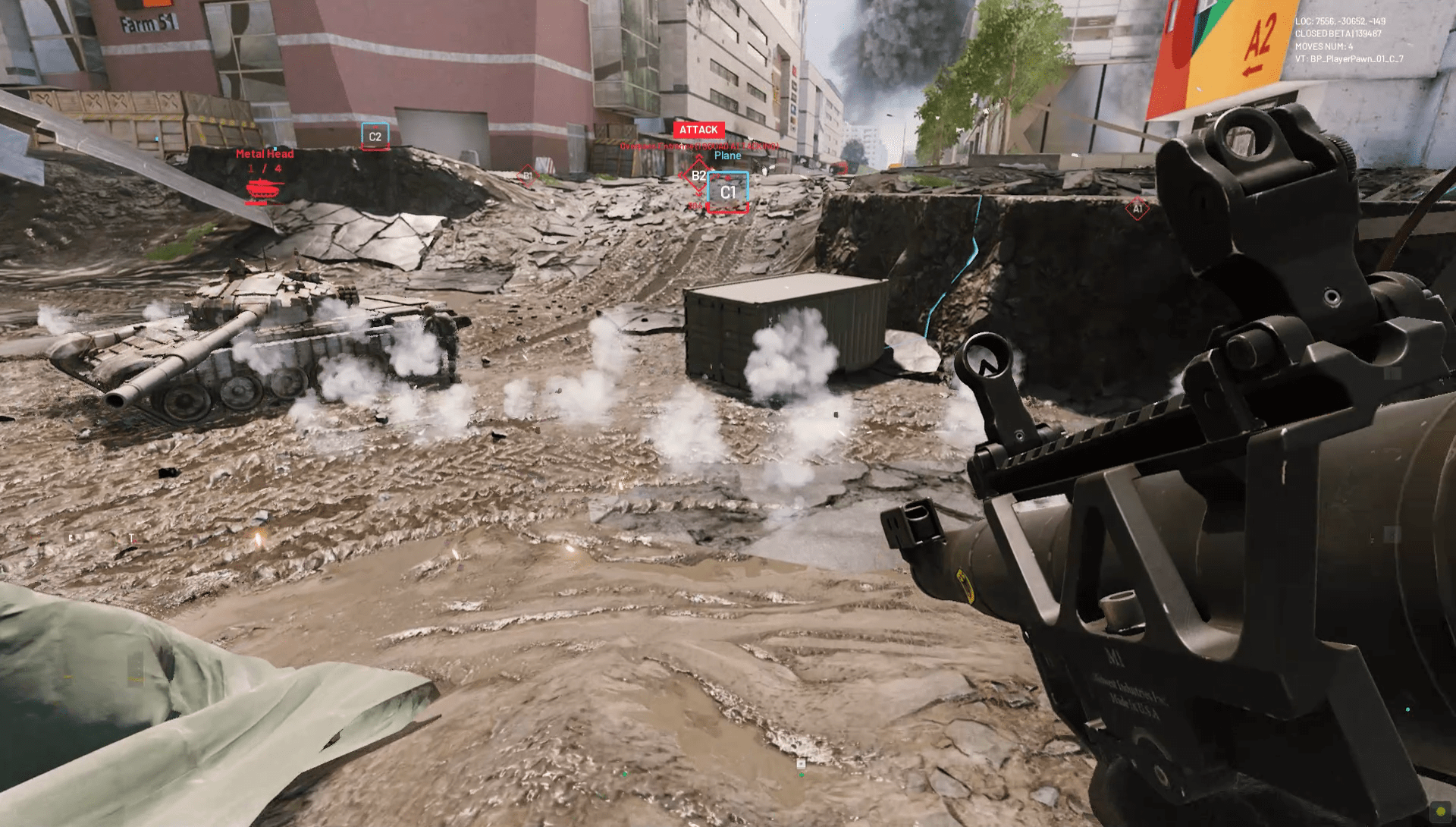 It was three years ago that I last (and first) looked at World War 3, probably the worst-named contender Battlefield series ever had. I think it may have died once or twice in the interim. However,  last weekend’s stress test gave public (and me) the chance to take it out for a spin again.

World War 3 is a modern multiplayer FPS with Battlefield-like ambitions. If there’s any background in the game, it can be inferred that it’s set in… a World War 3 in Europe. This puts more emphasis on depicting Russian and Polish forces more than the DICE’s approach of “what is US fighting today.” And the maps are currently set in spaces scattered between Moscow and Berlin, the cities that bookend all good wars.

At the largest scale, World War 3 can pit two 20-player teams against each other in battlefields big enough for tanks to get involved. Capturable points are set in pairs, and your team needs to grab both to score. Notably, their importance as respawn locations is diminished; you can choose to spawn next to any member of your (5-person) squad or the team APC that can be driven from the main base to act as a mobile spawn.

Team work makes the dream work, and the current grants victory to the team that collects the most capture points instead of running down respawn tickets like Battlefield. This is a nice sop to newbies (and me) who can go out and get killed without the fear they’re dragging the team down. They can also contribute in non-killy ways by just sitting on the objective your squad leader ordered captured – that’s even more points that just shooting people.

Currently, capturing a point takes some time which I don’t mind. With a battlefield as fluid as this, fast cap would make point sniping much more of an issue.

Kill one person and you’re a murderer, kill a dozen and they give you a tank.

In World War 3, points are used for Call of Duty-like kill streaks, but they carry over deaths. So while a 4000 point tank-call in is a expensive, you can get there by just being a a team player and grabbing points. And call ins can generate points by themselves, from jammers and radars pinging enemies to rampaging around in a tank, killing anything that moves.

And yes, tanks are only available in call-ins – same goes for most heavy hardware (don’t quote me on that, but an armed APC may be the most threatening thing that spawns at base). Yet you need to really think if you want it: kill streaks come with three rewards per, and you can’t switch them without dying.

But just like everything else in the World War 3, kill streak rewards are customizable, some more than others. Each slot is specialized, with one giving more support options (like jammer or radar drones), one focusing on attacks (like calling in arty or missiles you can lead to impact) and one giving you call-ins (from suicide quad drones to tanks).

Previously, call in prices depended on the customization options, but they’re more uniform now, with upgrades like tank armor gated behind progression. Gone is the dream of just taking a barebones T-72A onto the field because it’s that much cheaper than one with all the T-72B3 upgrades or a Leo 2.

The player customization in World War 2 is still roughly similar, though much of the items were locked for the test. You can split that field into two parts: customizing your pixelman will look, and then the loadouts (which are chosen separately from call ins, btw). You have (or you’ll have) access to headgear, facial wear, face paint, body paint, upper body kit, pants, gloves, logos, country flags and so on. The stress test only had US, Polish, and Russian kit, but hey, there’s a lot of other stuff in the pipeline.

The unforeseen side-effect is that both teams look the same and blue-on-blue happens more often than you’d think in a video game. Then again, not every modern FPS is as brave as Insurgency, which provides two different arsenals and wardrobes to cover the differences between red and blue teams.

So yeah, the arsenals. You can build your own class, as it were, by choosing a primary and secondary weapon, head and chest armor, a grenade, and a resupply package type. Except for the last two, everything has weight value, which impacts your mobility. Other than that, go wild.

Even gun customization in World War 3 is split in two. For an assault rifle, you can put on any sort of sight you want (provided you unlocked it) as well as canted sights, choose a magazine type, an alternative ammo type, (probably fictitious) barrel options rated by length – and only then do you get into cosmetics. Receiver, upper, buttstock, grip (the one you attach vertical- and potato-types to)- all can be replaced, none have gameplay impact.

Complaining about kit is a time-honored tradition

So while the default World War 3 Assault pack has an assault rifle, a pistol, some armor, frags and a med pack, I swapped out the rifle for an SMG and grenades for AT mines. This way, I had the highest mobility class and some AT capability (that’s more effective than the anemic RPG-7) while sacrificing some damage and range.

Furthermore, backpacks exist, which allow you take special sights, under-barrel weapons, and gadgets to switch out on the field almost as if you were playing Crysis.

At present, I don’t know how effective armor is in World War 3. Your helmet and ballistic plate are placed realistically, so there’s plenty of you to shoot outside their coverage. And even when hitting armor, TTK is short enough that it may not matter. An argument can be made that speed helps you more than marginal gains at survival.

Also, the RPG-7 is really bad at dealing with tanks – and still comes with an atrocious missile plume, probably to help tankers identify your location better. The devs are aware of this, I think, because there were some questions about in the questionnaire.

Meanwhile, from my experience and from reading the chat, it seems that assault rifles absolutely rule the day, to the point where people don’t even bother with sniper rifles much. LMGs suffer from being sluggish and rewarding essentially camper play. It’s a hard sell in a game where frontlines don’t exist, sightlines are constrained, and 4 other men in the squad are not enough to provide both an assault element and someone to guard your back.

This is especially true in the 10v10 TDM mode, but that doesn’t matter much. Modes like that were a mistake when Battlefield 3 introduced the Close Quarters DLC to get some of the Call of Duty kiddies to come over, and they are a mistake now. Give us more big tank maps.

On the other hand, World War 3 was fun even for someone like me: graced with the reflexes of a potato sack and a K/D ratio of a MOBA creep. I shot a few people, I exploded at least a single tank with mines, I spent several minutes looking for enemies while driving a call-in MG drone, and I even squad-led a few times! Just iron out the bugs and nerf ARs.

The maps are generally nice-to-good. They provide a good deal of variety in both sights and terrain layouts, with open streets transitioning into building interiors and back again. One checkpoint is located in Lenin’s mausoleum, and you can fight around some of the most striking locations in downtown Warsaw. Overall, I like it, even if the parade-marked erector-launchers and Bumerangs scattered in the Moscow level look a bit silly due to density.

I’m glad that World War 3 isn’t dead. More variety in any kind of sphere is a good thing. Challenges to established AAA franchises are similarly vital and healthy. So once the devs patch out the bugs and do something nice about AR and tank supremacy, we’ll have a really cool game on our hands.