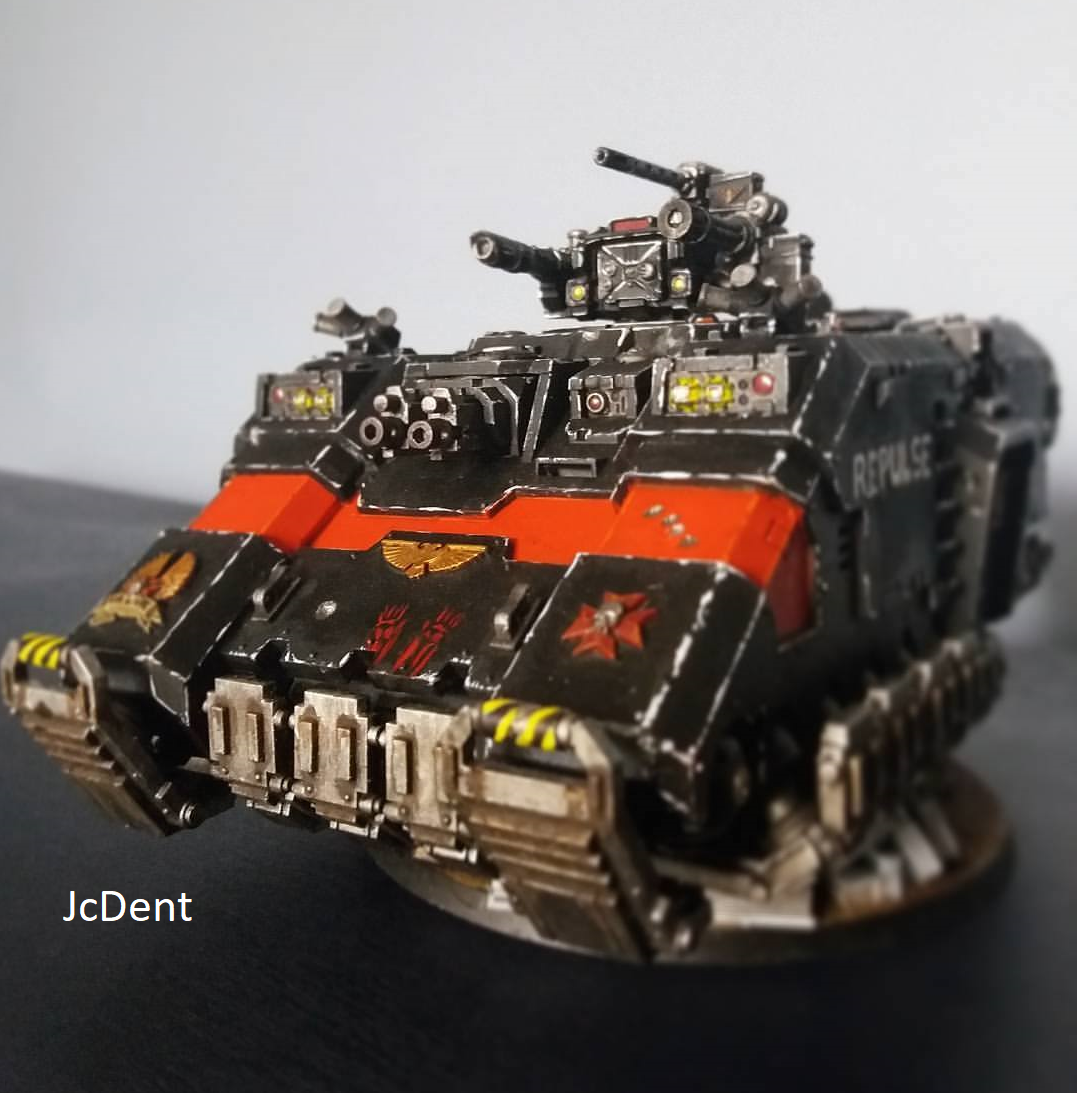 Last year, I bough Repulsor, the aptly named flying Primaris Landraider mostly to build it the way I want it, to make it less ugly. This mostly involved totally replacing the God-awful turret with something else. And I mostly succeeded! I did all the painting in one month, as per rules of Something Awful Oath thread. I was aiming to hit all of the monthly challenges it presents, so details are to follow. It took that many pictures simply because I could get more points that way for Show Your Work challenge. 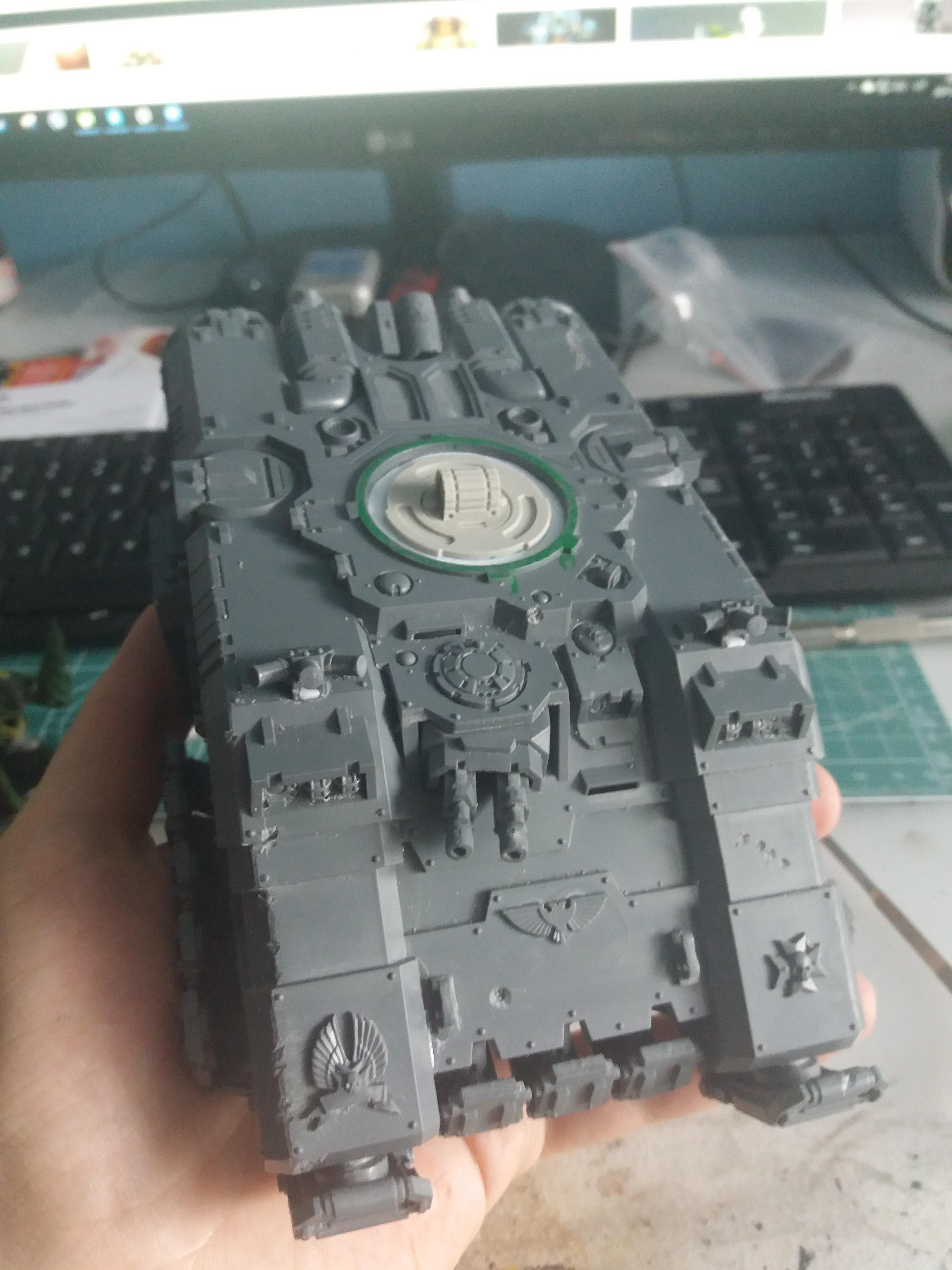 The beast is assembled! Apparently, ill-fitting sides are an oft encountered issue. Maybe the battle damage – this being one other challenge – helped hide it. The green ring is from the green paint I used to make a print on plastic which would be the base of a new turret. Said turret is a third-party Razorback turret… and converting the model was part of the Chop Shop challenge.

I also added the smoke launchers from a Chimera, since usual GW attitude to launchers is somewhat insane.

I also added bitz fro the Black Templar kit that I’ve been using for various stuff. 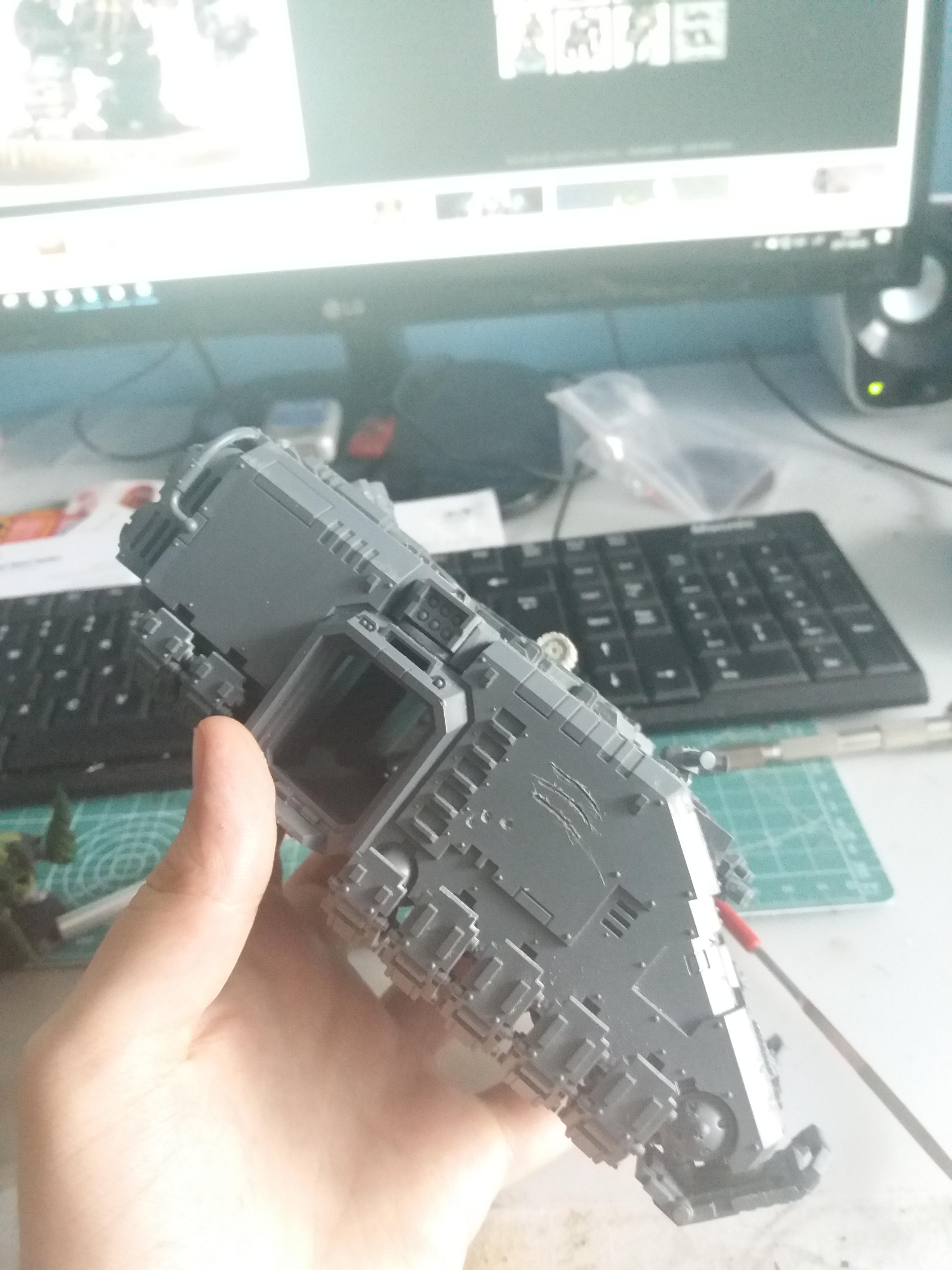 More battle damage! Of course, the front had the most of it. 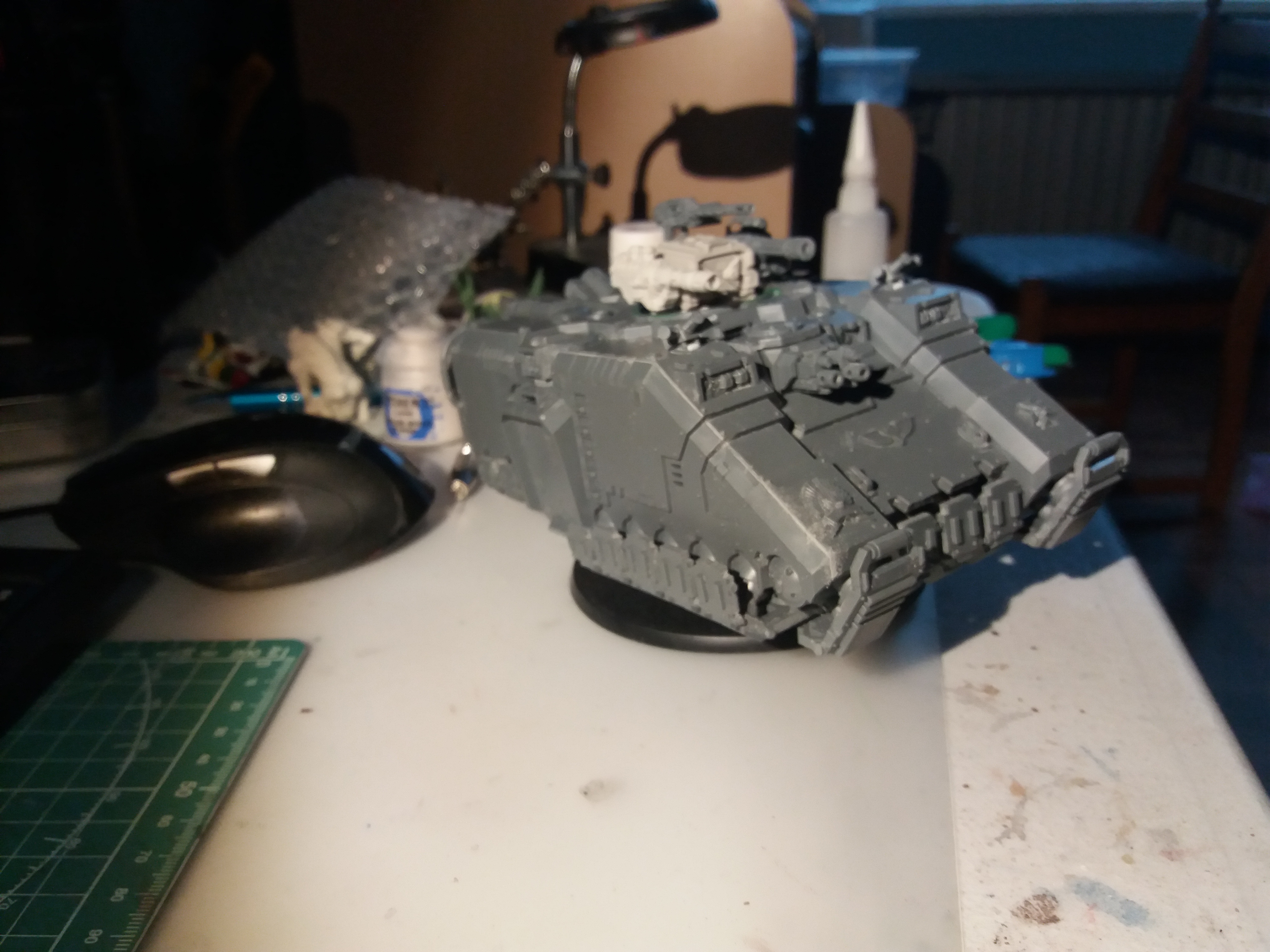 Here’s how the repulse looked with the magnetized turret – I wanted to be able to take it off for transportation. The turret is the dual lascannon one from Kromlech! I just fitted the Gatling gun instead of one of the cannons, and did a shitty job of bolting the stubber on the back.

At that time, I had lost the front part of the Gatling gun. I have rediscovered it, but it hasn’t been reunited with the gun yet.

Kromlech also sent me a mechanical ork arm just to be nice. It will be useful if I decide to collect Orks in summer. 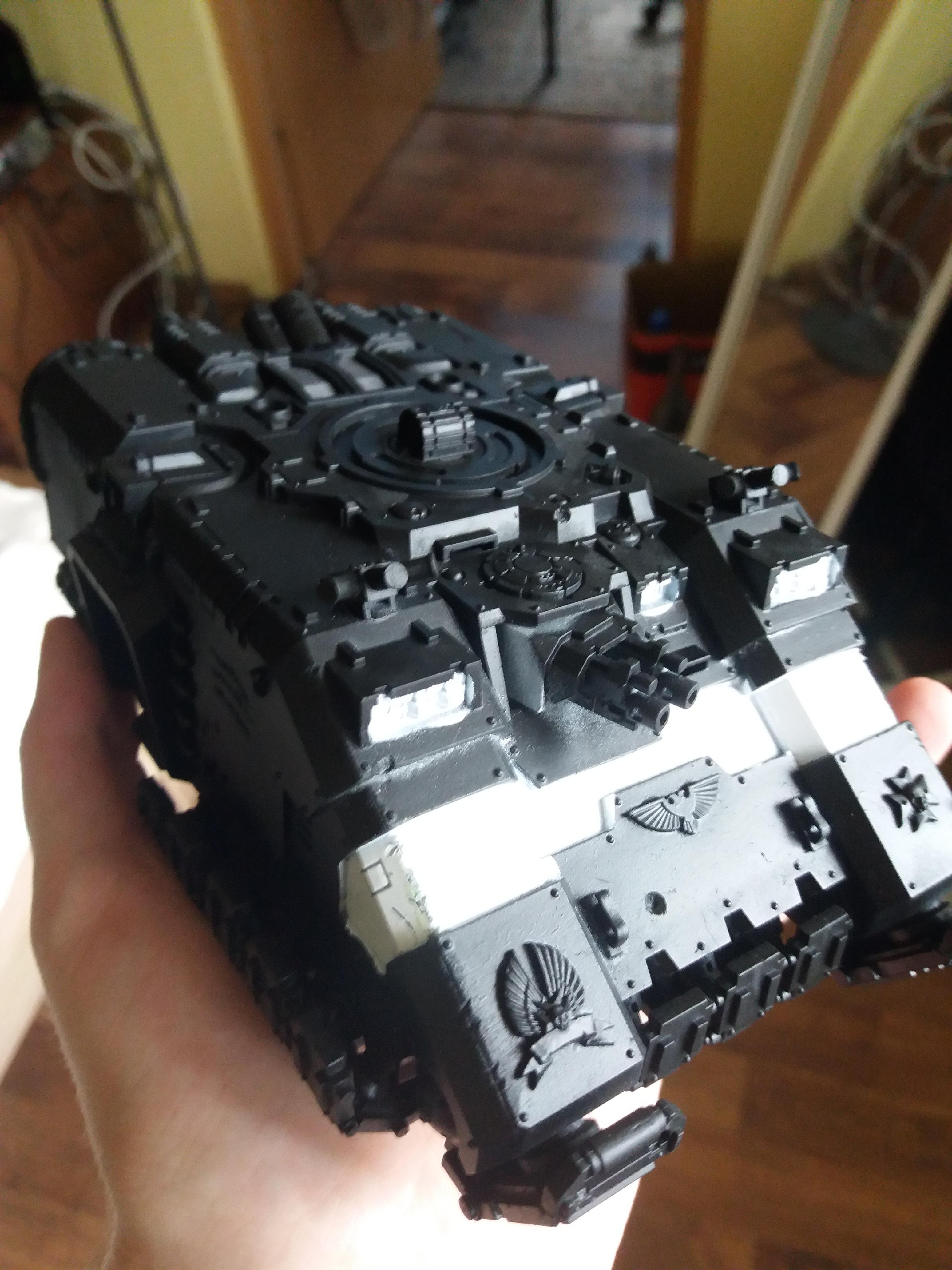 When I actually got to painting the damn thing, I sprayed the front white, then I used poster putty (or whatever you call it) and paper to mask off the white areas before going in the black. 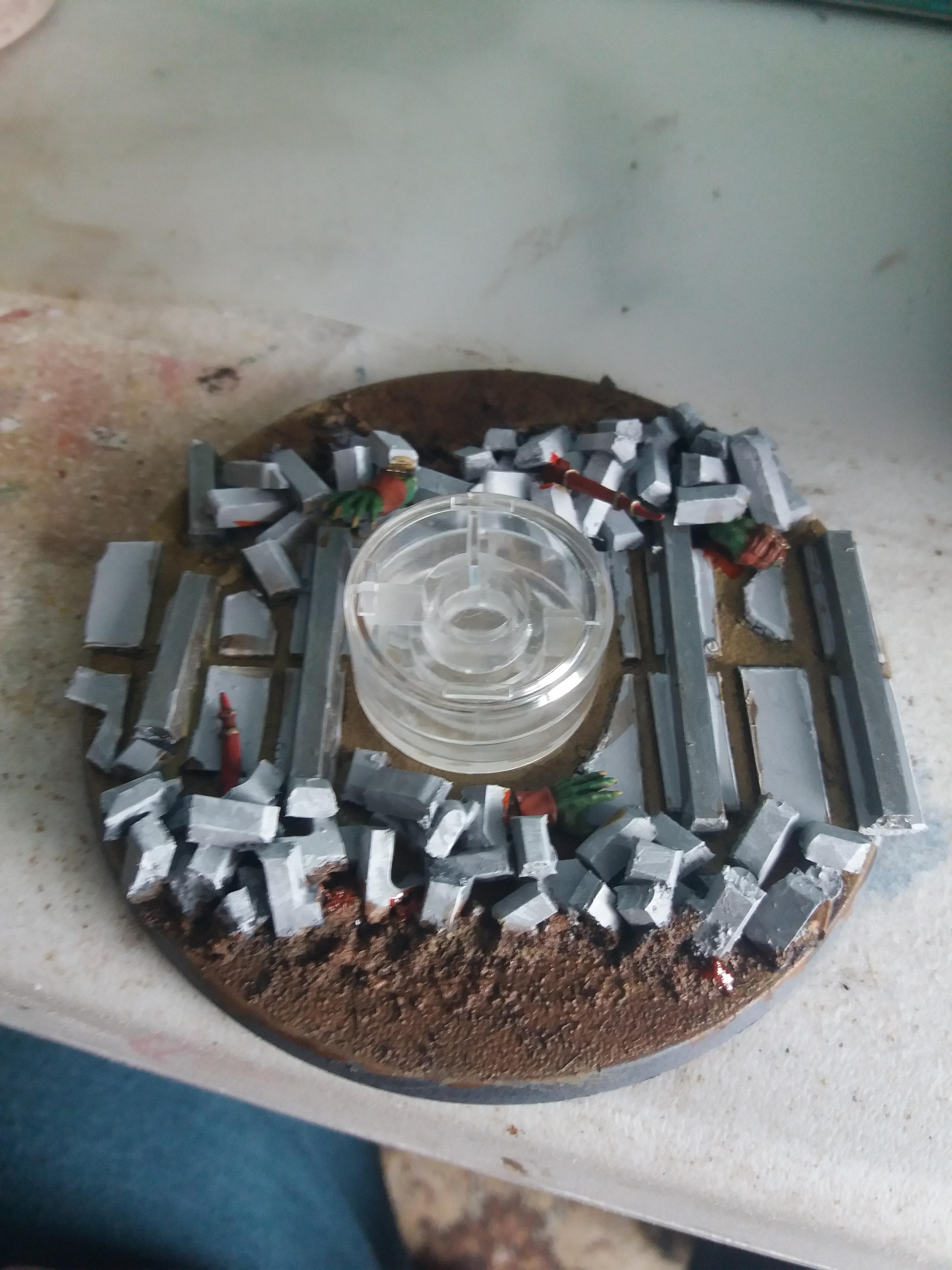 The Back to Base-ics challenge forced me to spruce up the base. The stupid idea for the flying Land Raider is that even though it’s a skimmer ([b]A Flying Start[/b] challenge is to paint something that is flight-capable), it’s actually so heavy that it barely clears ground, and the grav waves or whatever crush everything underneath it… which sounds terrible [i]until you realize that’s basically what tank tracks do, too.[/i] So I wanted to leave some pristine ground in the center of the base while making the sides show how detritus and earth is churned and pushed towards the center by the treads grav waves. You be the judge. 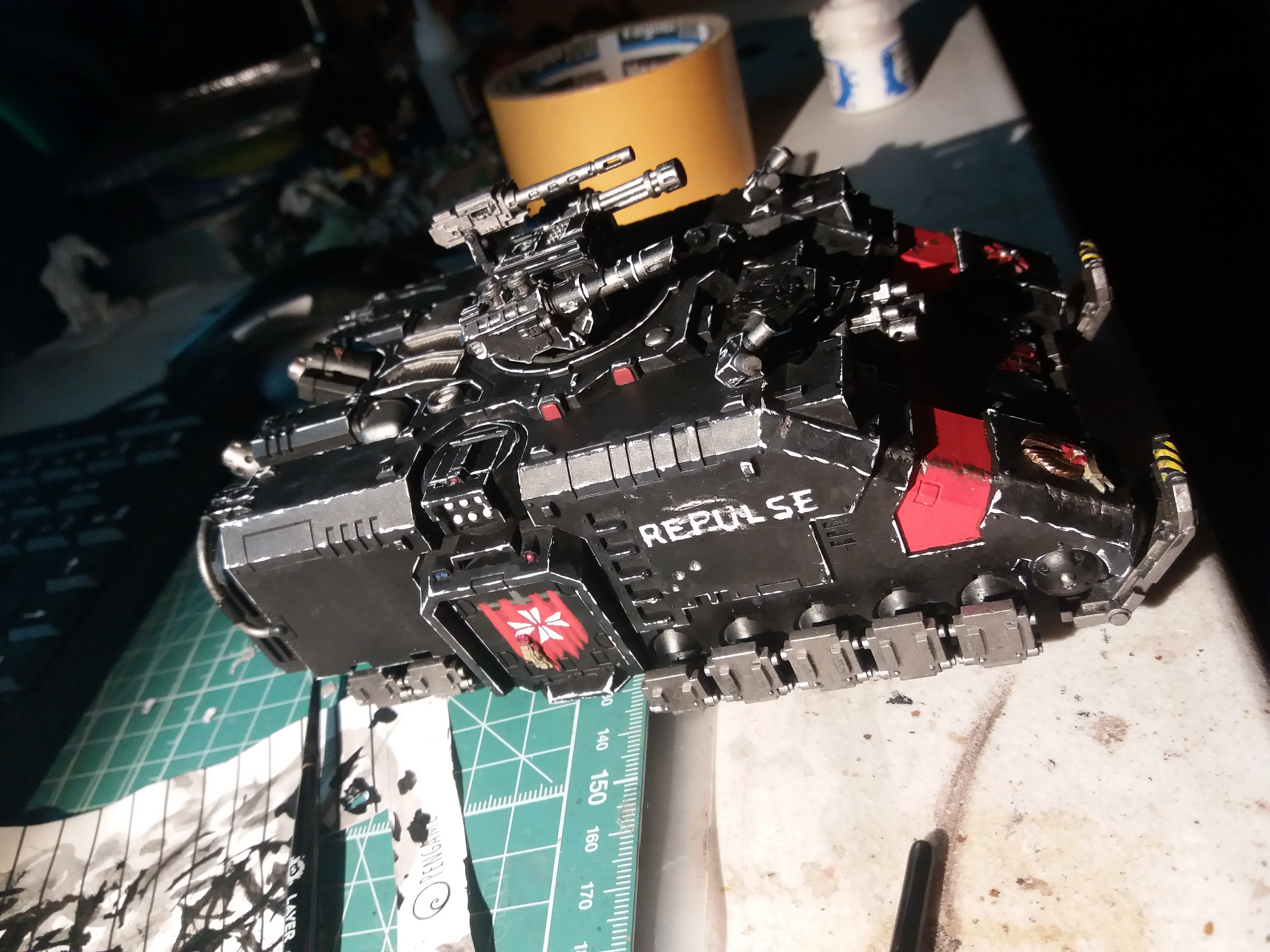 This is how it looked nearly painted. I wanted to add some decals to the sides. But those didn’t want to stick – or just didn’t like the way they were handled.

Eventually, I ended up freehanding the name on the sides of the tank. I think it helps break up all the empty space, which I had plenty of since I didn’t put any of the stupid stowage that goes on the back half of the tank. 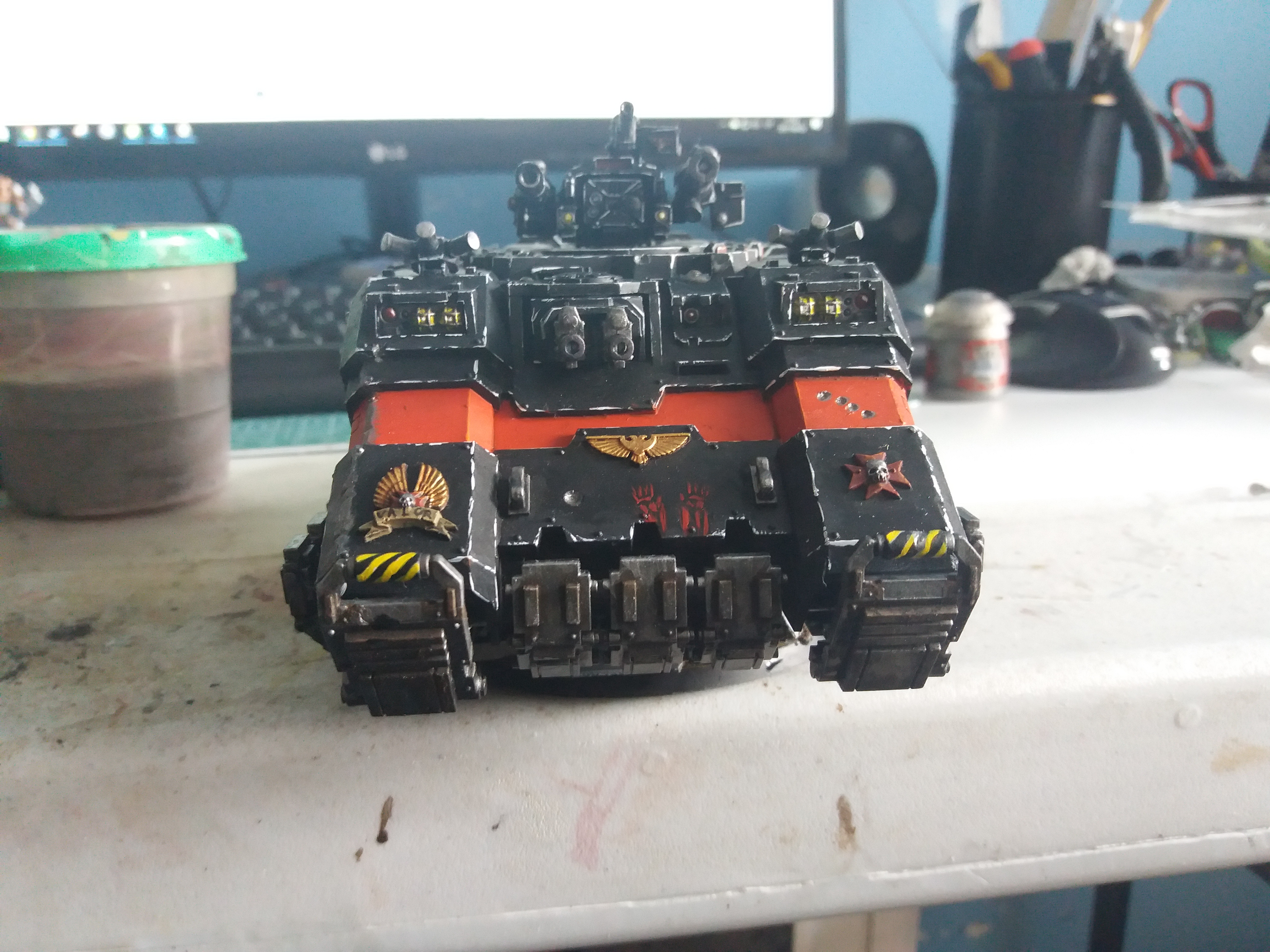 Those hand prints belong to some ork or dirty traitor who got dragged under the Repulsor (My Heart Bleeds For You challenges you to add blood to the model). I also applied Typhus Corrosion to the vertical grav plates for some of those sweet Always Take The Weather With You challenge points.

I also wanted Time To Shine challenge to be counted for all the metals and gold. Maybe I should buy one of those glazes someday. 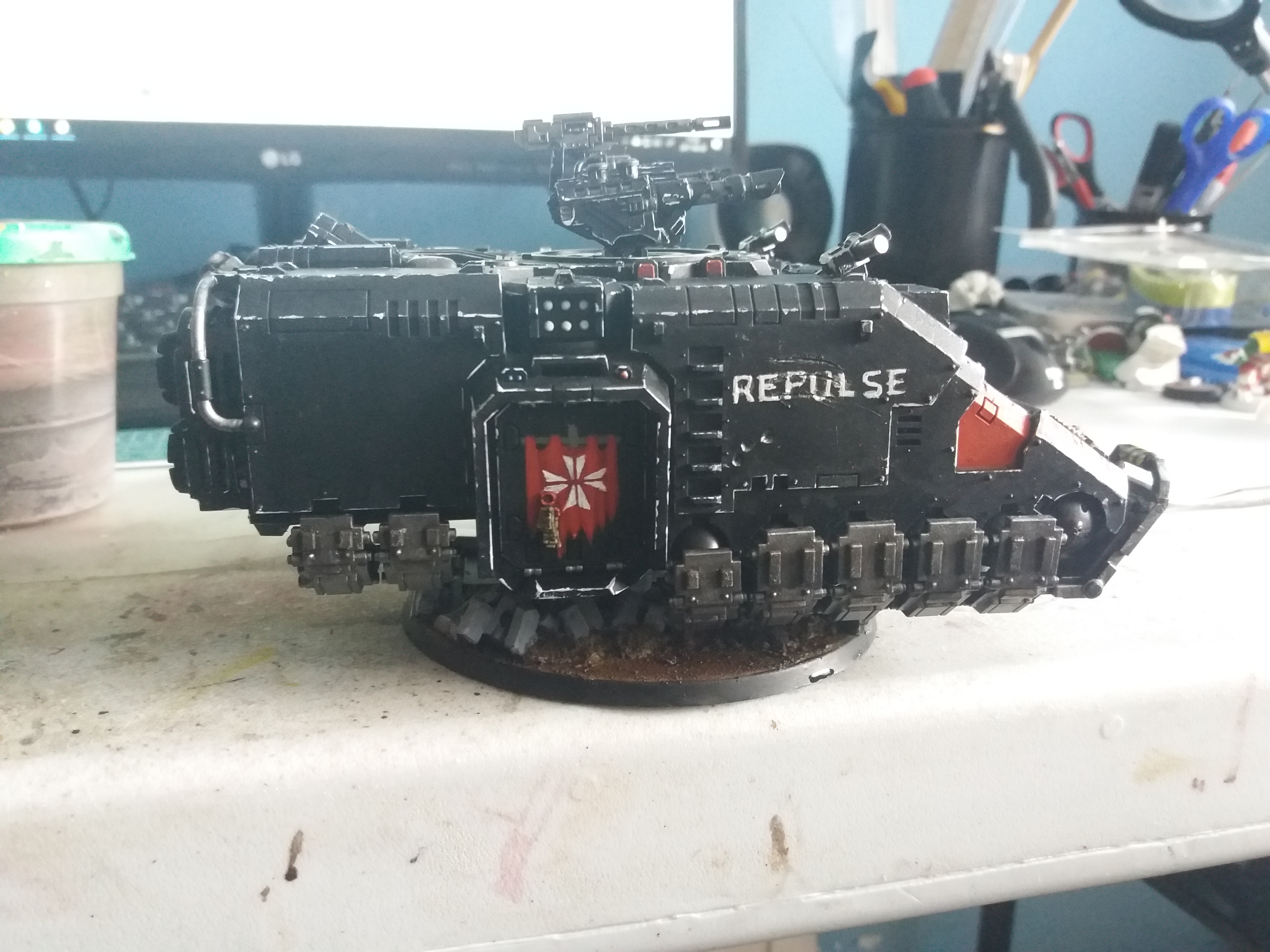 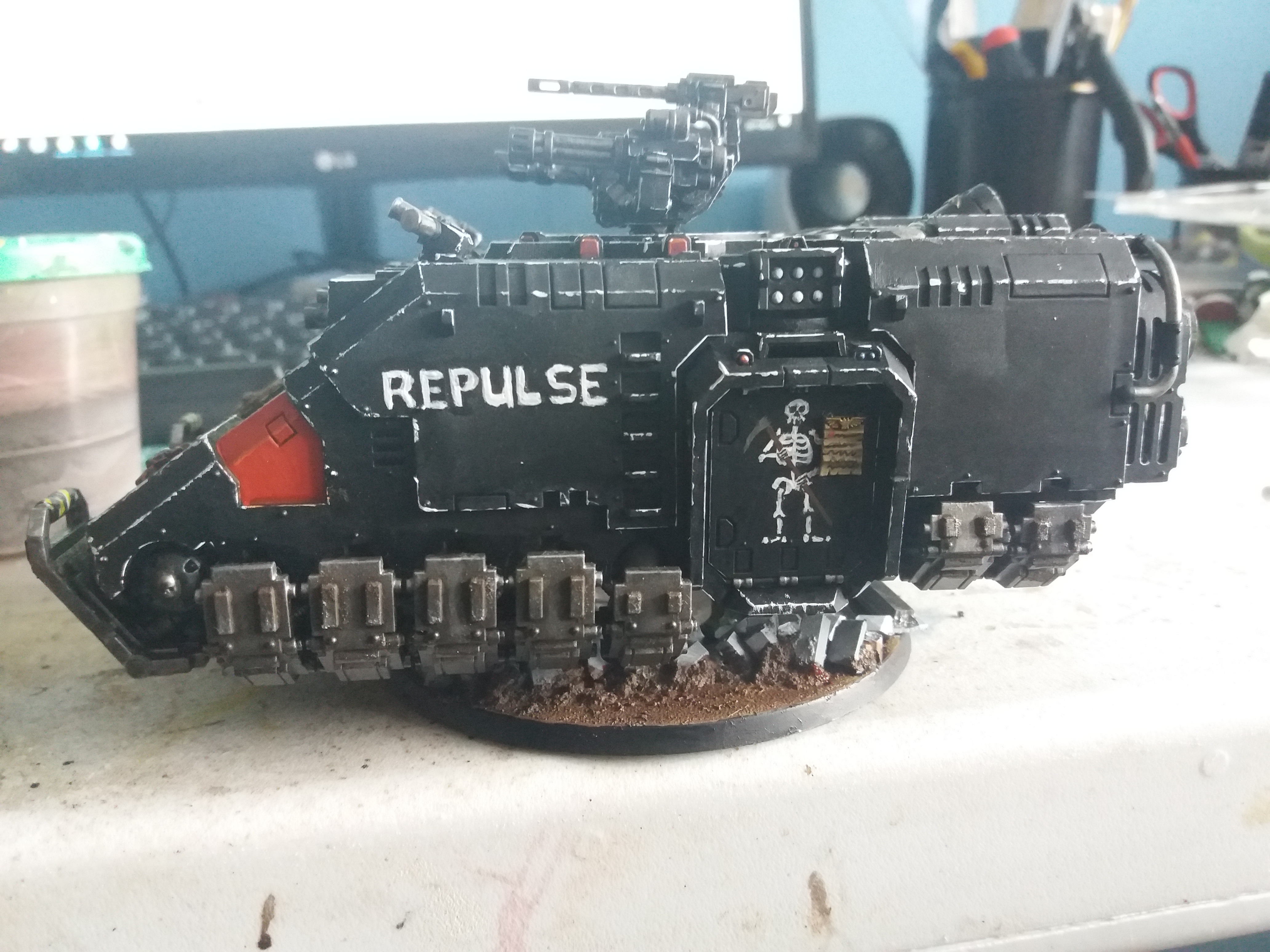 The paintings on the doors (they’re not glued in… it’s just that they got stuck there) are for Bring Out Your Dead (add skellies or skulls), Free(hand) As A Bird (do some freehand painting and Raise Your Flag (model, paint or draw a banner). The banner bears some of the Chapter iconography (I’m not set on it yet) while a skellington is always welcome on an SM vehicle. 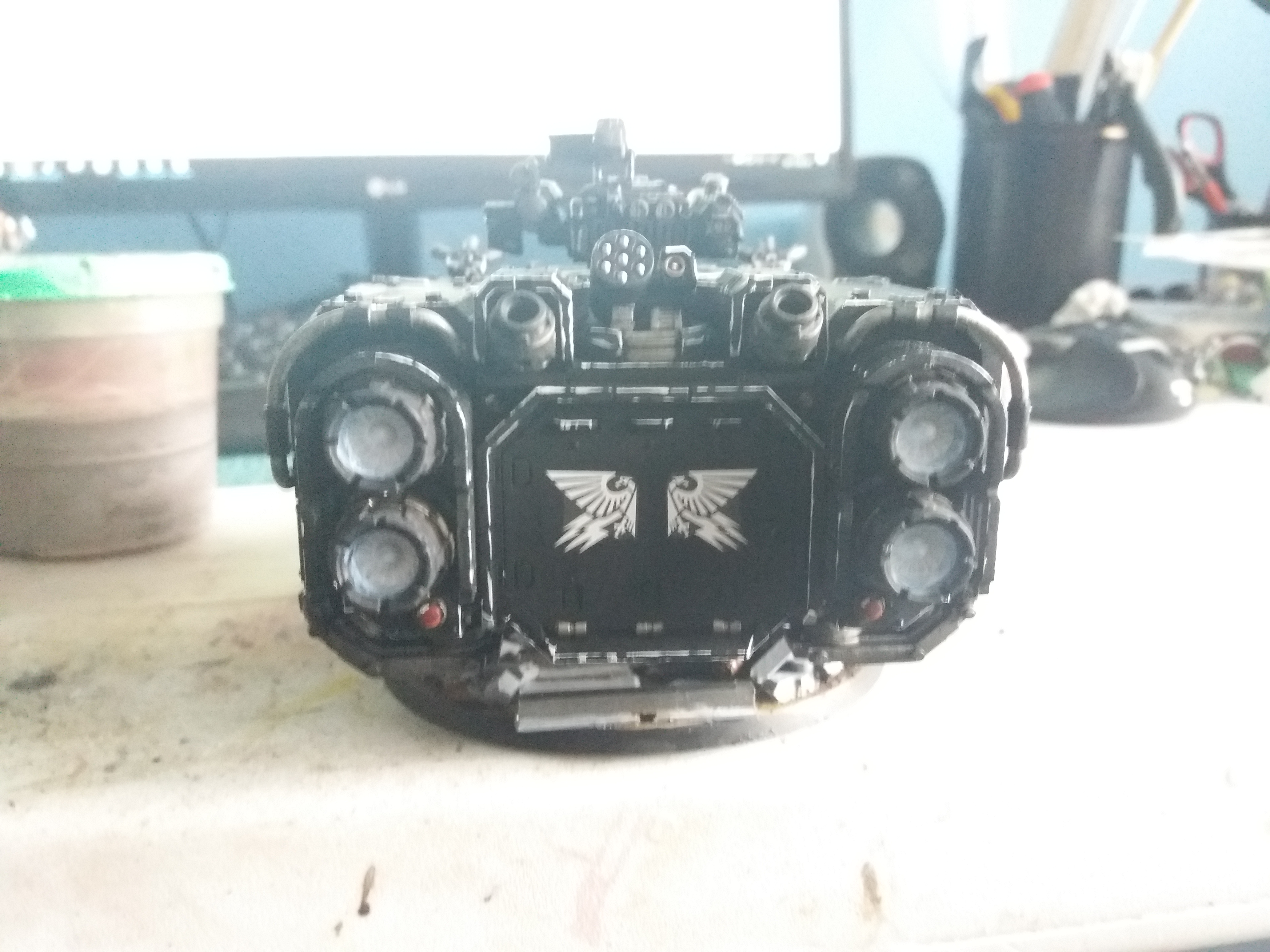 While it’s fairly obvious that I will never manage to do OSL, I tried doing something similar for the Feeling the heat (make something look hot) challenge with the thruster tubes, starting with blue mixed with white, then applying more and more white. In the end, I added some more blue and black shading to the ends to hide some mistakes.

And yes, these are the only two decals that made it!

That’s about it for Repulse the Repulsor! It’s the first 40K vehicle I had put together since that Chimera that I bought when I finally had enough money for the hobby, and it certainly is my biggest model.

As for the battlefield performance, I had only had one chance to take it through the paces. It basically has no weapons that reach over 24″, but get within that range, and you’ll just have to run a checklist of all the rolls that you have to make.

By the next time I assemble a vehicle, I’ll already have bought a lightbox, so the pictures won’t be as ass!