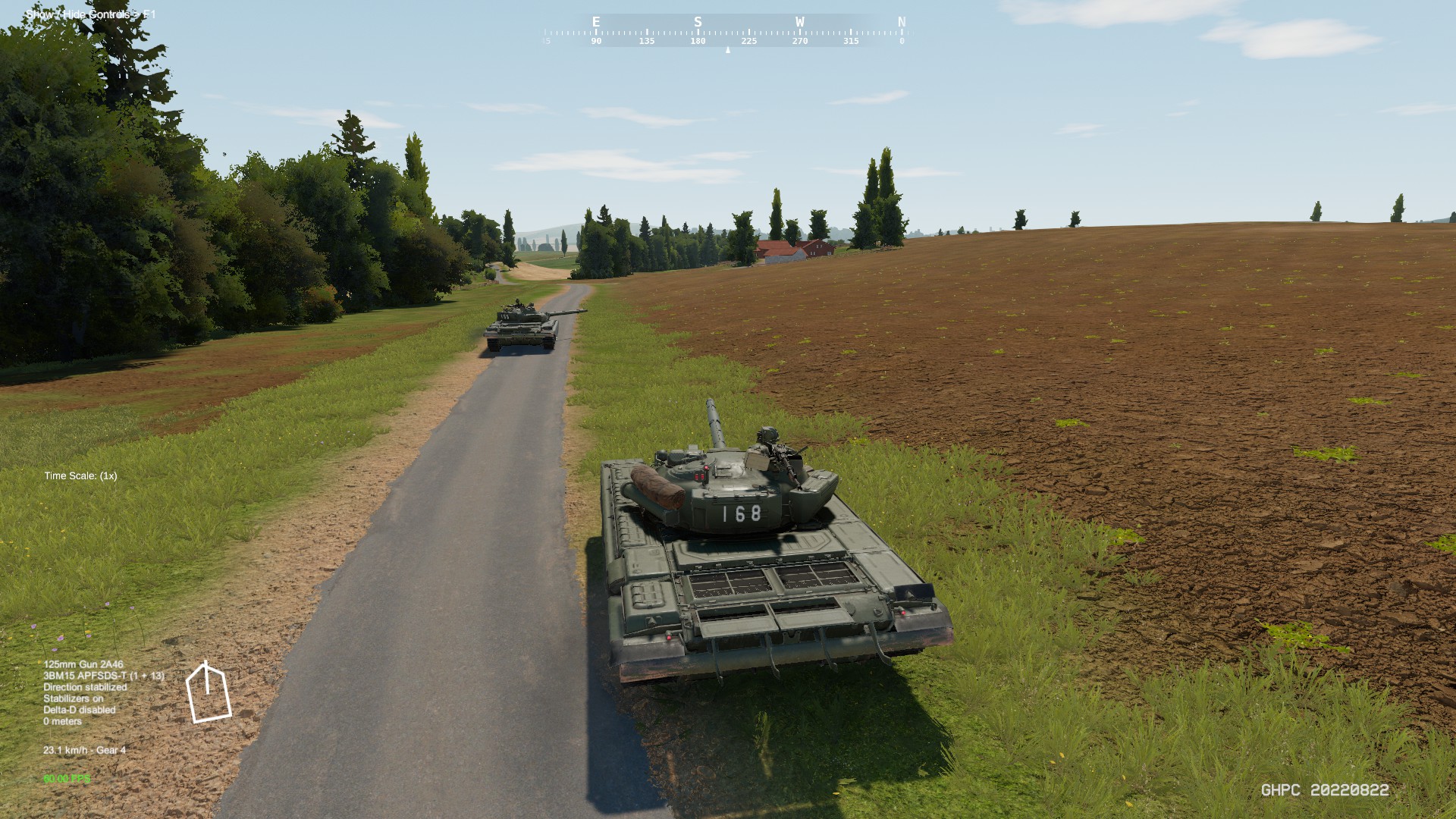 What if you could play War Thunder’s realistic tank mode, but in single player and without Gaijin’s meddling with balance? Because that’s pretty much how Gunner, HEAT, PC!* is shaping up to be. It’s a relaxed tank sim that’s easy on the controls and hard on the simulation – a sort of land-bound cousin of Tiny Combat Arena.

Look, I don’t know whether Gunner, HEAT, PC! is going to have an actual plot or is it just assumed that WW3 starts without turning Earth into a glass marble. However, it’s set in the late ‘80s, so the Americans get to bring M1Ps onto the field. On the other hand, at such an early stage of game’s development, the Soviets can, at best, muster East German T-72s.

Gunner, HEAT, PC! is a vehicular combat(?) game with hard-core ballistics, complex damage calculations, and yet with controls approachable to the sort of person who doesn’t take out a loan for DCS DLCs. That’s what I really want from sims: simulation gameplay that doesn’t require you to learn shortcuts for turning the tank 22.5 degrees, or toggling the sight shield doors.

What’s already there has already given me experiences that other war games have failed to do. Historically speaking, there’s a lot that can be said about the advantage NATO had gained over the Soviets in the area of sensors in the later years. Having had enough of Charlie (as well as North Koreans) owning the night, western tacticool pioneers developed night vision and thermal devices to equip nearly everything. That’s a fine advantage for a top down strategy game, but the feeling is never visceral.

Yet that single night Gunner, HEAT, PC! scenario with M60A1 RISE Pattons… Look, even with RISE upgrades, M60A1 Patton wasn’t a top-of-the-line tank by the end of ‘80s. But it has second generation night vision sights, fairly decent even without IR illumination. The East Germans in that mission don’t.

In Gunner, HEAT, PC!, you will die like a dog. That’s why the game allows you to seamlessly jump from vehicle to vehicle at the press of a button. Nothing is invulnerableand even Abramses can get overwhelmed. It’s unlikely that you’ll finish a scenario without casualties.

But my Pattons squeezed through that mission OK. Because we could see the BMP-1s, T-55s and T-72s, and they couldn’t see us. Not without the enemy turning on the IR illuminator, which makes the user into a tiny armored lighthouse, clear for anyone with night vision to see. The enemy AI is programmed to be careful with its usage, shortly sweeping the battlefield before turning it off.

Even with my terrible gunnery – RISE lacks the automatic gun laying cheats that more advanced tanks possess – they never stood a chance. The AI drives to contact and, lacking targets, stops. I shoot. The AI sweeps with the IR light and finds nothing. I shoot and I shoot again, because they only know to switch targets if the threat changes shape or catches fire.

There’s a bit in Ralph Peters’ Red Army where a Soviet tanker uses the burning hulls of his comrades to hide from NATO sights and ambush their tanks. This also played out in the night mission as one T-72 survived way too long -I couldn’t see where to shoot due to his proximity to exploded tanks.

It’s a rare feeling, to feel sad for the enemy in a game. Never happens in strategy games – and the feeling wouldn’t be the same as you’re not on the ground yourself. In FPS games it’s not much more often met, because you know that the devs have set up any specific crew death moment (Call of Duty only ever managed it with the “crew expendable” bit) and the rules that govern your life are not the same for the AI opponents. But in Gunner, HEAT, PC!, the parity is there – in fact, when it comes to ATGMs, the AI is definitely a lot better than you.

It’s to make the other bastard die for his

Coming back to the night mission, ceteris paribus, the East German forces would have destroyed mine. But it was dark and my night sights were superior. It was decidedly unfair, in ways that Flashpoint Campaigns will never be able to show, no matter how many flaming T-64s dot the field.

So, Gunner, HEAT, PC! has truly given me a profound experience, and it’s not even half done. The campaign is in the embryo stage, there’s a lot of polish to be done, arsenals need to be fleshed out. I’d like to get some more ease of life features when it comes to situational awareness and where the rest of my buddies are in relation to my tank. Some more precise ally AI control wouldn’t be amiss either.

But the devs have posted the Gunner, HEAT, PC! roadmap and the game still has a lot of way to go before it hits the 1.0 zero version. At that point, it’s bound to be better than it is now, and then we can get into some real casual simulation action.

*Gunner = indicates that this command is meant for the dude controlling the tank’s gun
HEAT = high-explosive anti-tank, a type of anti-tank round you don’t sling at modern tanks
PC = personnel carrier, a type of target that is susceptible to HEAT rounds
! = exclamation mark