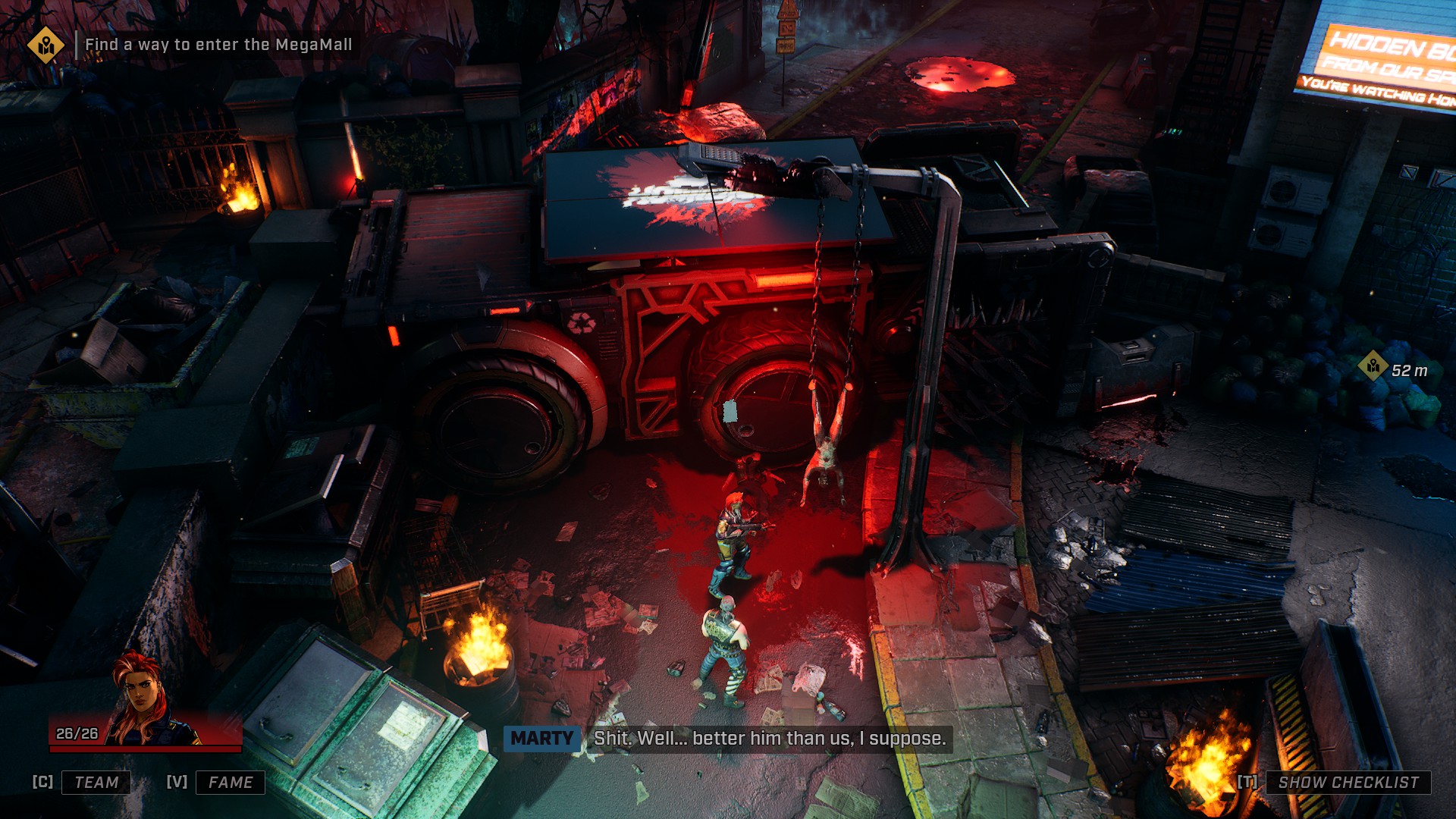 “Nostalgia-proof” is the trait that I proudly tout in-lieu of having a personality. You can’t fool me into playing a new game simply by shit that will remind me of my childhood. However, I have recently gained an appreciation for the decrepit yet flashy dystopian future as depicted in the movies of the 80s and the 90s. That means yon Johnny Mnemonic, Total Recall, The Soldier, and so on. That’s why I jumped at the chance to preview the blood-splattered turn-based tactical battles in Homicidal All-Stars!

In the near future, bounty hunter Scarlett is starting out as a Contestant in the hottest reality show around: Homicidal All-Stars, which challenges Contestants to cross urban gauntlets while battling death row inmates – the most violent psychos and murderers given their last chance at freedom (and murder) – grouped into the Defenders. Everyone is heavily armed and death is real – Homicidal All-Stars is a very straightforward name. But the allure of huge cash prize for the Contestants is strong, very strong. You’d think that was what drew Scarlett in, too – however, her real goal is a bit different from just winning a bunch of cash.

So Takeshi’s-Castle-With-Guns is the framing device. The gameplay device, on the other hand, is constructed from choice cuts in the tactical scavenger genre of XCOM and Mutant Year Zero. You explore the map in real time, solving puzzles, chatting about interactive objects (skinned corpses, exploded cars) and collecting loot. As Scarlett is wandering about and taking in the sights, she may get ambushed or enter arenas – that’s how you transition into XCOM-type (the UI is nearly the same) tactical combat. You know, choose the attack, choose the target, check the hit percentage, shoot, rinse, repeat.

Well, I liked Mutant Year Zero, and XCOM is a lot of fun, so Homicidal All-Stars is also tickles my fancy. It’s certainly stripped down in mechanics than either of them – no base building, a rudimentary hub system, fairly short skill trees, and all characters are locked to their specific weapon type. The focus relies presenting the atmosphere and giving you hand-crafted battles (instead of randomly-generated missions like XCOM).

A lot of the gameplay features in Homicidal All-Stars is geared at discouraging boring overwatch creep. AI enemies will camp their spawn if you’re too far away from them; they’ll also enter overwatch to give you a warm greeting. And some missions will have timers – for example: the asshole showrunner has decided to activate the bombs in your location and you need to hit the switches to disarm them.

Even Scarlett’s skills are constructed around Soldiers/Rangers abilities to get close in for the kill. Did you enjoy shooting after moving twice in XCOM? Then you will ‘ll enjoy it here as well. After all, dynamic action and high-speed violence is good television!

Battling for the ratings

At the same time, Homicidal All-Stars tries to deliver a lot even with its fairly limited palette of tools. Battles are fought over a variety of arenas that have their own hazards (with instakill trains being the best) while the puzzles can sometimes require that you control more than a single character to flip switches and unlock the way forward.

It would all still feel fairly solid double-A, but the spice that makes Homicidal All-Stars stick out to me is the dedication to the atmosphere. Sure, dystopian cyberpunk isn’t anything new, and there’s plenty of games like that. But Homicidal All-Stars has the grit and details that modern movies lack; the dystopian future of today is a bleak landscape of iDevices, HGTV homes, and brutalist buildings.

Omega Corporation – as shady as anything called like that could be – has bought out a city to turn it into an arena for the show. And the formerly (and some even currently) inhabited districts like markets and habitation zones really show the change those living spaces underwent. Aside from the usual wear and tear, The Defenders have added their own embellishments with spikes and corpses, graffiti, and more.

At the same time, it’s an environment unmistakably constructed to host a show. You’ll constantly see camera drones flying around or be followed by studio light drones. There will be walled enclosures with fans and viewers – and sometimes, you’ll sign autographs (to raise your profile as funny, assholish, etc.. star in order to net desired sponsor meta upgrades). Oh, and no modern city, no matter how much it embraces architecture hostile to the homeless, has installed periodic flame fountains and spike trap floors like the ones scattered in the game’s levels.

It helps that the devs lean into the darkness and grittiness of the show. When you visit your “hub” between episodes (levels), it’s not that special, even if it’s meant to convey living on but one floor of a large apartment building transformed into barracks for Competitors and Defenders. No, it’s when you enter the littered streets, blood-splattered train stations, and gloomy apartments that the game’s artistic style shines it’s neon brightest. And your extravagant if trashy opponents fit right in

The city has died – nay, it was killed – and Homicidal All-Stars now inhabits its hollowed out carcass.

How about some face for the masses?

If only there was more variety in how the new citizens looked. Scum, the most common mook, probably has two mask variations, and I’d love to get more. Same goes for even more specialized Defenders, like the heavily augment, shotgun-toting Ogres.

Oh, and since Homicidal All-Stars is all about reducing enemies into bloody giblets, I would love to see more of that than just exploding heads (though these are the most satisfying head destructions since Jagged Alliance 2).
The 2D art is excellent all across the board, but especially in the cutscenes. It’s all a good mix of dark colors and thick line work, working in concert with fairly-excellent scene composition.

In the audio department, voice acting could be better. Some of the NPCs can be really stilted, and the TV announcer’s generic commentary gets old really soon (luckily there’s an option to decrease the occurences). On the other hand, the dialogue doesn’t trip over itself as you sometimes get with European developers, and with Scarlett being a Latina, we also have some representation up in here.

In general, Homicidal All-Stars looks solid at this step of Early Access. What else can be added, aside from the desire for more balancing and optimizing? More melee kills and character weapon models (and maybe character skins). However, what is in the game is already enough to sustain up to 20 hours of play. Now give us some different Scum!