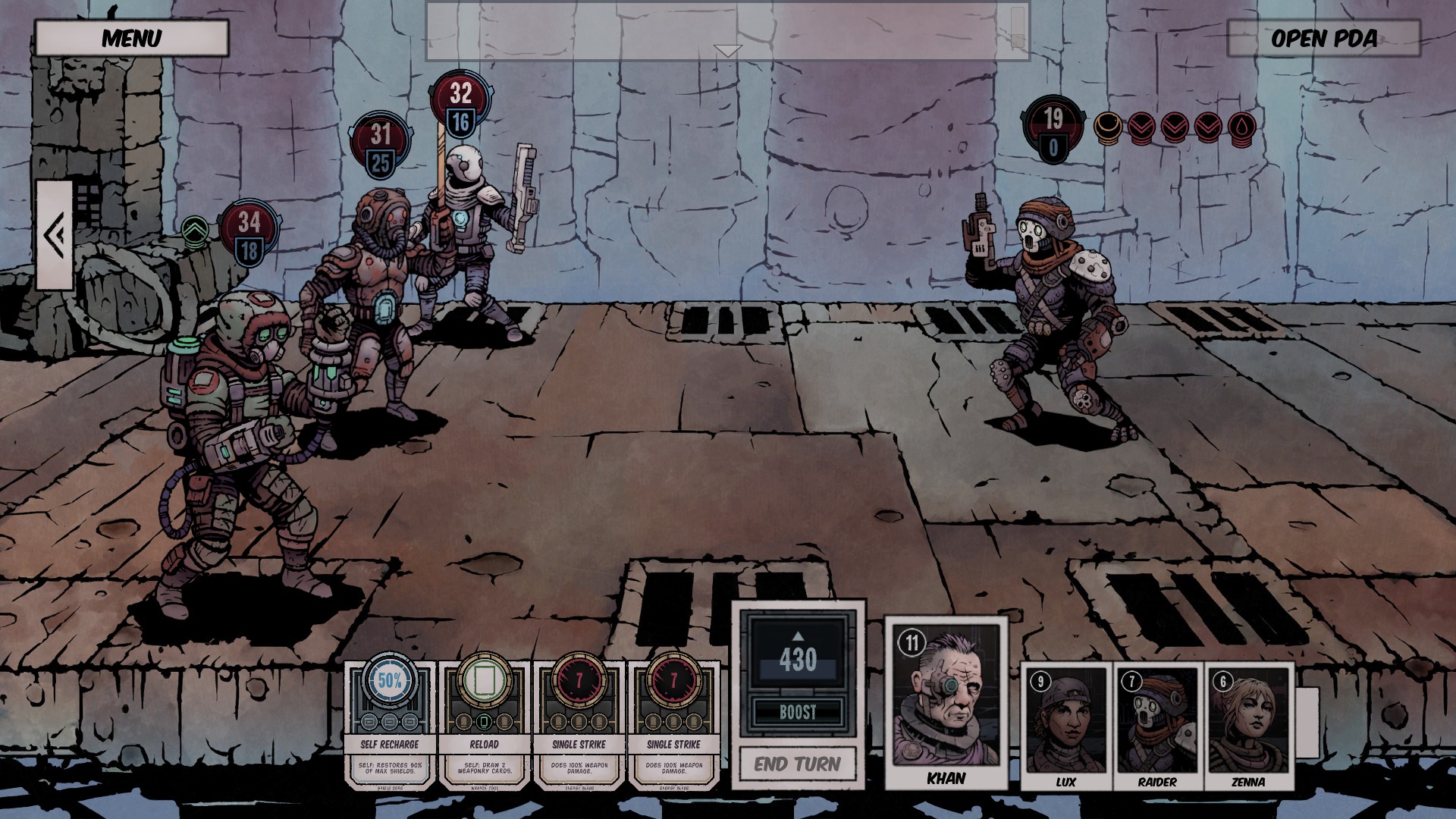 In DSD, you’re a mercenary scavenger, scouring abandoned space ships (derelicts, if you will) for scraps to sell. The local space governor gives you an offer: plumb the void, scour the derelicts for bits of location data that hint where the mythical Mothership is located, and you and your team will get galactic citizenship (read: you won’t be poor anymore). So off you go, barging into long-abandoned ships looking for shit to nick.

Unlike in DD, where you have a constantly rotating (due to maiming, insanity and death) roster of heroes, you’ll be sticking with three dudes (or girls) in DSD. Square by square you will explore the derelicts, scanning darkened sectors to reveal your path, watching your energy gouge and bumping into things. While most of squares are empty, some are marked with symbols denoting encounters, combat or junk to loot. Of course, that list of stuff you might find grows with the difficulty of the derelicts.

You’ll also be fighting quite a lot – it would be weird if you weren’t. Sometimes, you’ll stumble into enemies or a band of troublemakers will catch up to you. Following such hostile meetings, your three soldiers will line up on the left while the enemy will array his numbers to the right. There will be no moving or maneuvering, just pummeling people when your time on the initiative track comes.

However, it’s a little more involved than that. For one, you don’t have these standard battle moves like “attack” or “defend.” Nay, all of your actions are actually cards a character draws from his or her deck. Almost all pieces of equipment give your trooper more cards as well as providing modifiers.

And while there are some rather simple damage dealing attack cards, some of the others impact the Initiative track, debuff enemies and so on. Of course, you can also work your support magic on friendly troops. You’ll be boosting shields (to keep those precious, non-regenerating-between-encounters HPs safe), adding to their initiative or maybe even allowing them to play additional cards.

What you character does in combat will depend on their class in a major way. Classes not only provide their own abilities (and more are unlocked by leveling up), but also your starting stats. And those stats are what affects how effective your gear and cards are. Speaking of gear: each character can equip four things, and classes determine what slots you get. For example, Medics only get one ranged weapon slot, but two tool slots, while Scrappers only get one tool, but both a ranged weapon and melee weapon slots. So, as you can gather, a Medic won’t be doing much killing, but a lot of boosting, debuffing and other support shenanigans. Don’t start the game with three Medics.

The enemies will be working on diminishing you in various ways too. While you won’t see their hand – or even how many cards they get – you’ll soon learn to anticipate certain actions. Skinks, for example, will love boosting their mates with “skink call” while eye-bots will headbutt your soldiers to disorient them. Stripping enemy buffs is really important – luckily, there are several ways to do it. Of course, you can also inflict a variety of fun debilitating conditions on them, too.

There is a decent variety of these walking loot containers – called “enemies” in the general parlance – in the game. Even on your first derelict, you are likely to encounter worms, Skinks (not as cute was Warhammer Fantasy ones), malfunctioning robots and maybe even space zombies. The more dangerous the derelict, the bigger variety of dangerous enemies you can see. Some encounters can even be optionally dangerous – you don’t need to attack a group of fellow junkers returning from a haul, but you may!

This also plays into the game’s quest system. Finding data is rarely just a cut and dry thing – once you stumble on the console (or whatever) that has it, you may need to jump through some hoops. You may also pick up mercenary contracts between derelict delves, which may require you to find characters – or to simply harvest monster drops. Either way, it gives you the chance to interact with the game via dialogue prompts, with some chance to impact the outcome of these sidequests.

Deep Sky Derelicts is quite the looker to boot. While it’s visual style might not be as distinctly grim as Darkest Dungeon, it has its own comic-like thing going. Your attacks look like panels straight out of a visual novel, and you’ll soon learn to love the chunky art style. I’d even like to see some of it in a card game! Unfortunately, the writing could better – your characters are especially poor in the quips department, and the dialogues aren’t as natural as they could be.

If you want to delve into derelicts (space dungeons), then you can hardly find a better game than Deep Space Derelicts. The action card mechanic is unique and offers interesting solutions to your problems – as well as interesting problems to overcome. Now if only the patched in better quips…