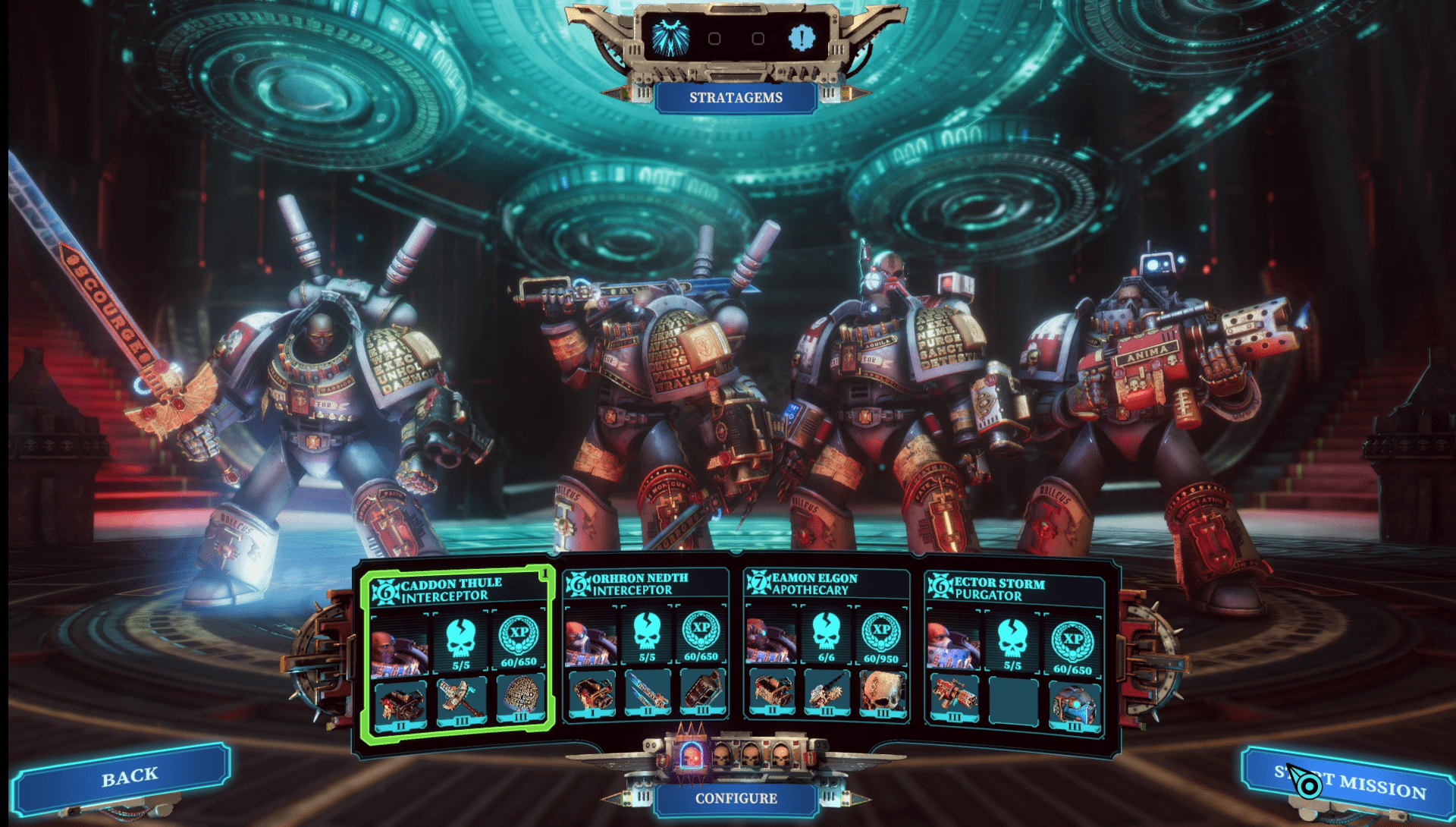 I could whine and whinge that I don’t like either part of that equation. Daemonhunters aren’t like the other Space Marine Chapters, set apart by their goal to fight daemons and their use of psychic powers. Nurgle, on the other hand, is the most played Chaos enemy, probably more so than Khorne, even if the Bloom, the plague of the game, will have distinct strains. A boo and a hiss to all that.

Setting these gripes aside, Warhammer 40,000: Chaos Gate – Daemonhunters is very much XCOM 40K, but with a few fitting changes. Space Marines are, in every way possible, better than those dregs XCOM hires while pretending that they’re getting the cream of the crop. Therefore, a Marine can go down once during the mission and still self revive.

His health will be halved for the rest of it and he’ll have to spend some time in Apothecarion afterward. He’ll return to the field with an augmentation that affects his stats – much more exciting than the XCOM grind.

Grey Knights also get three action points per turn, which translates into three actions. That means you can attack three times as well! And while it’s thematically appropriate that Astartes never miss and you always know what damage your attack will do, I don’t think the enemies miss either, which makes it all less special.

We also mustn’t forget that Grey Knights are psykers to a (superhu)man. They spend Willpower points to fuel their magic abilities. The most banal use is to boost their attacks, which ranges from making storm bolters and force weapons slightly more threatening to making the psycannon into missile launcher. That’s great fun if the target is near destructible cover and/or Munitorum-Approved Explosive Barrels.

I still remember when psykers could use Force Weapons to instagib enemies, but GW and associated properties are trying their damnest to forget.

Crush the heretics with your mind

But the real kicker are actual psychic powers. Aegis is the most boring of them, being an armor boost any Knight can do. But it can get really fun with, say, the Interceptor ability to teleport up to 15 tiles total (not straight line), hitting all the enemies you can cram into that range. Now that’s some righteous weeb shit, and you can still stab a fool at your final destination if you have the AP left. That’s how I decimated a patrol in a single turn in the demo.

However, I can’t promise that most of the powers in Warhammer 40,000: Chaos Gate – Daemonhunters will be closer to the Sacred Weeb Strike rather than Aegis.

Ah, but while Grey Knights are immune to Perils of the Warp, they can’t use their powers willy-nilly. Missions have an advancing Bloom gauge, which boosts enemies (temporarily) as it fills up. As using psyker powers is drawing power from the daemon realm, this adds to the Bloom gauge.

Of course, you Willpower reserves aren’t endless – so how do you replenish them? The solution has elegance that no Psychic Phase ever achieved: killing, both ranged and close combat. After all, Warhammer 40,000: Space Marine taught us that when you’re a Space Marine, every problem is in charge range.

No stupid wound tracks in this game

Another reason to use melee is critical hits. If you crit in melee, you *bored Mrs. Krabappel voice* enter something like Fallout VATS mode to target specific body parts. That way, you can stun the enemy (which leads to executions) or disable their weapons or abilities. The first two aren’t that important on mooks – even the walking piles of poo of the Death Guard fall quite easily – but the latter is certainly good for killing bosses.

Incidentally, melee executions restore action points! It’s also a good way to encourage melee in a game where you have guns – and quite a few daemons don’t.

As far as I can make out, you’ll need to defeat a Great Unclean One for each strain of The Bloom, the new interstellar plague. This means good ol’ fashioned boss fights with a modicum of usual boss fight nonsense. The one I fought had destroyable Nurgling spawners. You could only target the little buggers with area attacks (though the text implied you could walk over them – didn’t help, that) and they would rush one Knight at the end of the turn for chip damage.

Nurglings also powered a lot of GUO’s abilities, intercepting attacks with their bodies and being absorbed to heal him. I don’t know how that works out practically, but one of my Knights stabbed the healing ability out of the boss, which made the fight go faster. Which was important, since by the end of it, I was out of Willpower and reduced to shooting the big stinker with my Storm Bolters.

I thought Deus Ex had taught us that we don’t need to have bosses in games, but like with many legendary games, its example went unheeded. At least the bosses seem better than the dreadfully boring slogs in Dawn of War II.

Now, for the game outside the fights… The demo wasn’t set up for that. I could poke around the boat and chat with the characters, fiddle around with character customization, check out the research screens, and so on. So I can’t talk much about how your forces are managed and reinforced.

I did ask about the Grandmaster Report, which is like the XCOM funding phase. Here, you spend requisition points to upgrade the potential to get better mission rewards. You can also talk to the Grandmaster himself – for better or worse.

As for the rest of XCOM-isms… since Space Marines already have the peak of Imperial technology (if you ignore Mechanicus, Custodes, and other factions that should have never become tabletop armies), you don’t research a better bolter. Instead, the Inquisitor in investigating The Bloom and various ways to fight, boosting your knights. The plague comes in several varieties, and some research is locked behind collecting The Seed for a specific train. You get it by stabbing specially marked enemies dead.

After all, the benefits of interrogating slack-jawed cultists are limited, and daemons don’t leave bodies for autopsies. And, oh, you’ve been fighting these guys for 10,000 years already.

The other side of XCOM Throne Gelt is building a base. In the case of Warhammer 40,000: Chaos Gate – Daemonhunters, you’re rebuilding the Baleful Edict. Functionally, it’s the same, with ship repairs granting incremental upgrades to troop capacity and such.

Speaking of veteran warriors, neither the player character, not the one chatty Grey Knight will ever take to the field of battle. I don’t know how your absence is explained (XCOM model accidentally got enshrined in Codex Astartes?), but at least the other dude has a fluff-based ban from doing anything useful.

Outside of exposition, he’ll also give you lip for being bad at your job and losing too many Marines.

The other characters are the Inquisitor that shanghaied your boat and the heavily augmented techpriestess that looks after the ship. They also have their opinions as well as exposition that will be useful for players that chose Daemonhunters to be their entrance into 40K lore.

Now, for Make Your Own characters, the Knights have a lot of bibs and bobs you can change. Maybe I didn’t look at it too deep, but I don’t think you can go full XCOM and take to the field in screaming pink. Instead, you have access to probably all the bits that the (very long in the tooth) Grey Knight kit comes with it.

Unfortunately, character customization is where Warhammer 40,000: Chaos Gates – Daemonhunters‘ cartoony visual style stumbles. Sure, the way the Knights look like goofy plastic soldier men may be true to the 12 year old Strike Squad kit (and the 11 year old Termie set), but it doesn’t mean it looks that great. Fortunately, that’s not noticeable when you’re in action.

I guess models are also one reason why this game settles us with Nurgle for the 40,000th time. Between all sorts of Sloppity Bilepipers and Death Guard being the 8th edition’s evil posterboys, there’s a ready-made roster of enemies that fans can then go and buy. Probably the most annoying part of slavish adherence to released models is that Chaos Cultists demonstrate that they’re the most uniform force in galaxy, once again bringing out their Dark Vengeance box best.

Imagine having cultists matching the Chaos God they serve. Preposterous!

These gripes aside, the game looks excellent. It won’t score any obnoxious awards for achievements in making us hate Bitcoin-induced GPU drought any more, but it works. The environments look nice and Warhammer-y, though I wish the Plague Marines were a little more detailed. If we can have variety for our grenade models (thank the devs for that, as the grenade animation would get really boring otherwise), why not the stink boys?

All things considered, Warhammer 40,000: Chaos Gate – Daemonhunters isn’t the perfect little Space Marine game I see in my mind’s eye – nothing is. But I’m still waiting for it – and the almost guaranteed inevitable DLCs.