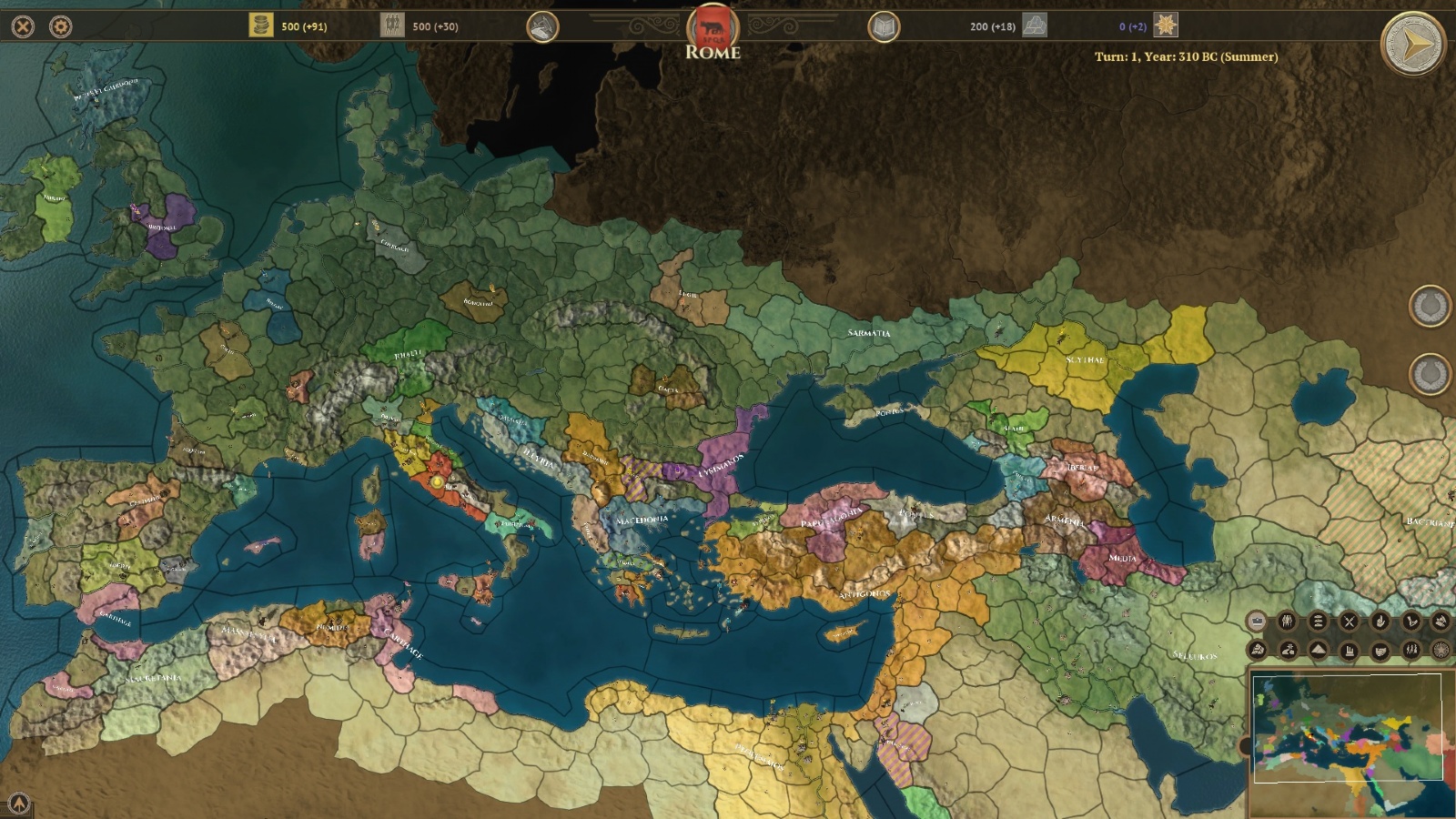 Rome is one of those historical periods that will always attract grogs – and, in turn, grog game designers. That’s why we have a new AGEOD title with Field of Glory: Empires.

Empires takes a bit wider strategic view than other Field of Glory games. After all, they’re based on a tabletop miniature wargame ruleset, which concerns itself with bashing blocks of troops into each other. No, Empires is all about managing an empire. It’s 10 years after Alexander the Great’s death and Diadochi are itching to fight it out over its remains. At the same time, plucky little Rome is starting to feel big and ready to take on… well, at least one other Italian tribe.

Killing in the Name of Some Ancient King

The game allows you to take control of basically any nation that existed at this point in time. Of course, Rome, Carthage and the Diadochi are the big kids on the block, but you can even take some poor one province minor and try your hand at becoming an empire.

Wanna see if you can transform Judea into a world power? What about Arabia (or it’s more historical contemporaries in the south)? You can (attempt to) do it! All nations have their own backstory, rating (for interest and difficulty) and mechanics that will affect them. These rules alone can make Rome and Carthage pay very differently even if most of the mechanics are the same.

Provinces Make the World Go Round

In FoG: Empires, your nation controls one or more provinces (which can be joined into a grand province), which are also spaces that armies move to and from. Each province has its own population units (which can be switched around between the 5 available spheres of labor), production of gold, metal, manpower, and culture.

A province can build buildings as long as it has infrastructure points to support them; not all buildings use infrastructure and some projects actually provide it. Curiously enough, you only ever have 5 choices of stuff to build (one per sphere) – or you can spend time and treasure to re-draw the stack. So it’s one way to alleviate the boredom of Total War’s linear city buildup.

Some buildings provide bonuses if you have resources to feed them – for example, incense makes Pleasure House much more effective. You can get those resources by trade – and it’s very handy that the game points out which nearby provinces can provide them. All in all, you want your country well cultured (or it will collecting senility markers, which is bad), well-financed and flush with metal (your army needs the money more than buildings do, and the military is the sole user of metal).

Field of Glory and Gore

Depending on the location and the structures, you will be able to recruit units for your army. For example, the Romans start out being able to recruit Legion infantry in Rome, but other provinces only provide Alae, somewhat inferior but still kickass dudes. Meanwhile, Carthage has manpower shortage which it makes up for with its mercenary focus. At the same time, Macedonia is just swimming in manpower – but it’s surrounded by enemies.

It is at this point some of the bigger flaws of the game will reveal themselves. The AI countries will sign a minor cooperation agreement with you one turn and attack you on the other. The basic thing that determines aggression seems to be whether your nation is at war. If you are, all sorts of runts will try to have a go at you.

Small nations will be gunning for you even when your doomstacks are crushing faces all around. However, the calculations for AI’s willingness to go for peace do not really allow for quick, limited wars. You will hear about a nation losing its capital every turn at the starts of the game. All in all, diplomacy is a far cry for something you’d see in a Paradox grand strategy game.

Battles, on the other hand… At the most basic level, you can just check the battle report and see if you won. If you so desire, you can see a recording of the battle – it’s very simple, but you can see what modifiers and stuff made you lose. It’s really basic and par for the course for a grand strategy game.

War Exports at an All-Time High

Or you can do what all the cool kids do and export the battle into Field of Glory II. Siege and naval battles don’t allow this, but the other ones are fair game. Empires will even offer to shut down the game and open FoGII (unfortunately, it only starts the launcher). That’s where all the fun is.

There’s a formula that transforms a unit card from Empires to unit stacks in FoGII. For example, a Legion card will turn into two units of Veteran Hastati/Principes (unfortunately, separate Hastati and Principes don’t seem to be a thing) and one of Triarii, mimicking the three-tier separation of the early legions. It’s usually more simple for other units – a Velites card will give you three blocks of Velites.

To go in any deeper, a FoGII review would be needed. However, I can say that commanding battles by yourself is extremely fun, especially when you have early Romans outclassing everyone else on a unit-per-unit basis. Even Alae are very good and you’ll be slaughtering Etruscans with reckless abandon. That’s how you get stories of a Hastati unit, surrounded from three sides, the corpse of their general at their feet together with half of their compatriots, deciding that they actually love this shit, rallying from being disrupted and winning the day.

This is the great conundrum, isn’t it? I can’t say that I would recommend Field of Glory: Empires if you don’t have Field of glory II or don’t plan to get it. Taken alone, Empires is just a 4X game that can hardly stand on its own against Imperator, derivative as it is.

Put them together, and Empires generates battles for you, providing them with meaning and context. Meanwhile, FoGII allows you to pull bullshit, player controlled victories – and that’s not necessarily through gamey exploitation of game mechanics. Just choosing the right spot to make a stand on the battlefield will allow you to swing the odds to your favor. The rest is just cutting through endless waves of Etruscans.