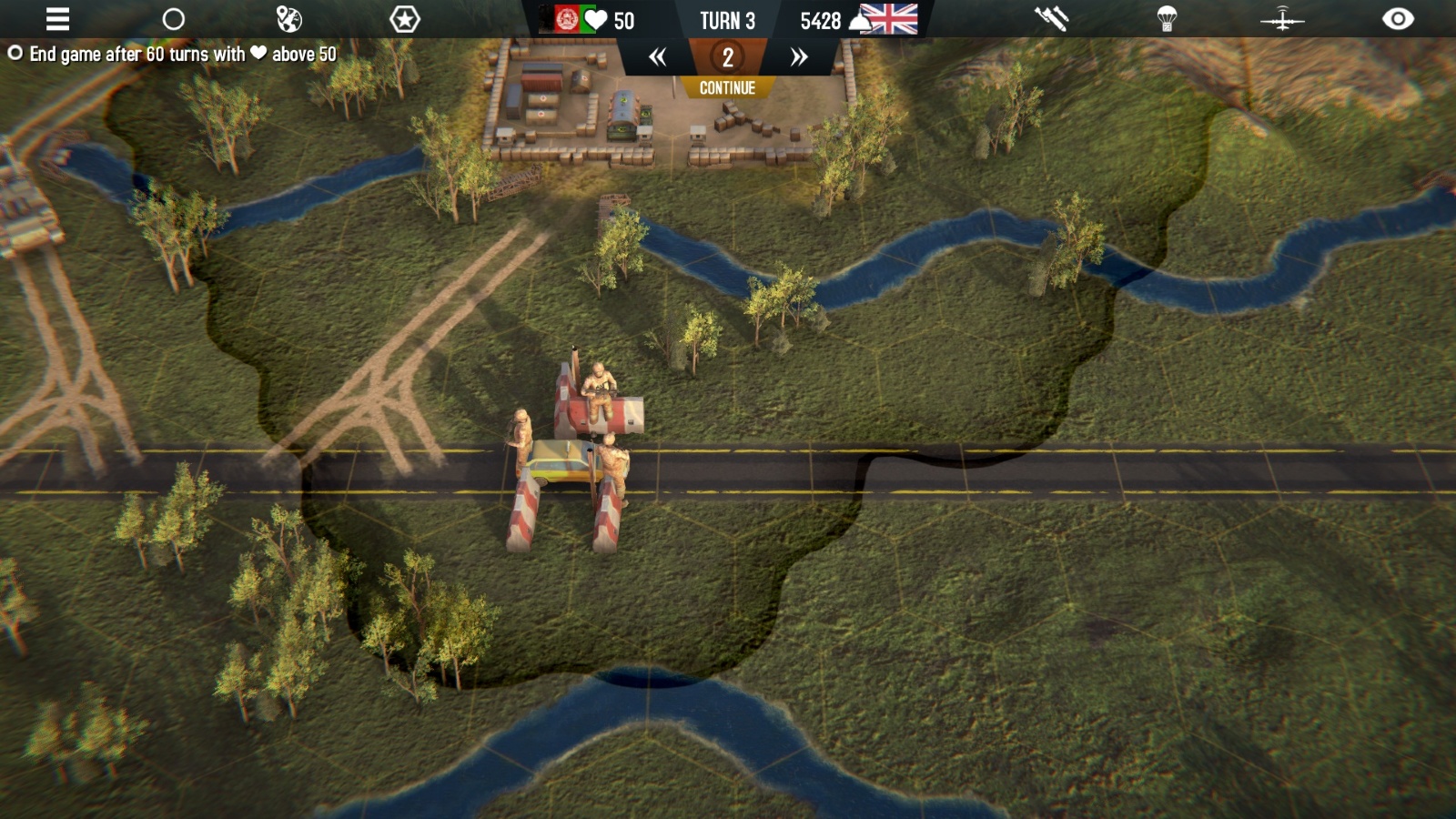 So, unless you’re playing the campaign, you get a randomly generated piece of the Graveyard of Empires. You’ll see your humble HQ, some villages, a Highway crossing the map, as well as a load of mountains and dirt. Your task? Preventing this little slice of Afghanistan from going to hell and transfer its control over to the official Afghani forces. Have fun and try not to die – but this time, as the British!

On the off chance that you never played this game before, here’s how it goes. You have your pool of Political Points which pay for everything in the game – including unit actions! So you hire a force in your HQ, give them funny names (“Alpha Company” just won’t do) and send them to defuse IEDs with their faces. Well, you hope that you’re sending tre troops out to visit villages to get some Hearts and Minds (it’s a stat!) going, but they invariably run into trouble.

And there is some micro involved – you have to load the troops into APCs and helos, tell them to dismount in a village, remount them, and do the whole thing all over again. At the same time you’re balancing your need to keep your special forces in your bases to train those Afghani troops and the desire to have that tier-1 operator ability to sniff out enemy forces a mile away in the field.

Oh yeah, neither the Militias, nor their big, bad brother Taliban appear on the map overtly. This isn’t CnC Generals! You need intel, patrols and some lucky use of UAVs to uncover their activity. At the same time, those stealthed bastards are entering the map from one edge and moving about to plant IEDs, sabotage waterworks and be a general sort of nuisance. They’re not an easy opponent to root out – and they don’t have a base you can bomb to stop them from spawning.

On the other hand, you have those villages that need to be connected to the Highway, visited with some regularlity and expensive (in Political Points) waterworks built. That’s how you keep not losing and accrue both Hearts and Minds score (important in several things, such as elections) as well as Political Points. And while killing enemy soldiers gives you hefty sums of PP, having friendly, waterwork’d villages is the only way to have a steady income. Of course, the most fun way to generate income is to send a dedicated mineclearing vehicle (Land Rover with a an open waffle maker hung on the front called “Panama” by the British) down the road to harmlessly explode IEDs. Way better than seeing some unit step on one and lose you Political Points in addition to what you invested in it.

Right, the British. They have some differences in unit prices and stats like action points. For example, SAS – McTavish, Soap and Co. – are more expensive than US special forces, but have more action points. The Royal Marines also have some unique units in addition to Royal analogues to American forces. The Jackal is the light counterpart to the regular APC – it’s a lot faster and it’s the only vehicle you can build that can deploy checkpoints. There’s also a slat-armor covered Scorpion – one of those funny British light tanks. In the game, it’s a direct fire support vehicle, allowing to engage the enemies (especially the new technical threat) without risking infantry.

Speaking of new risks: VBIEDs. These vehicular suicide bombers can’t hurt you directly like IEDs. However, they will attack the villages using those dirt roads you so helpfully built. The only way to deal with them is to establish checkpoints with infantry. Unfortunately, only Jackals and ANP jeeps (which spawn if a village loves you enough) can do that and it ties up an infantry unit in one place. On the other hand, every VBIED detonating at a checkpoint does so harmlessly and gives you some PP. Now, there’s only the matter of keeping those damn checkpoints supplied (much like Nam ’68, Afghanistan ’11 is a game that will convince you that Western military forces are always on the verge of starving to death). That’s why those ANP jeeps are so important – and that’s in addition to their ability to visit villages just like an infantry unit. When you hand everything over to the ANA forces, you’ll be using those trucks to keep those checkpoints going.

As far as visuals go, Afghanistan ’11 remain firmly OK when compared to other grog games. Frankly speaking, even 2D art and counters would work. However, the devs are honest souls and the new units get fittingly British models. That’s how I discovered that UK employed those funny Bandwagn 206 derivatives (and made a fool of myself by questioning their functionality on a forum). The civilian cars simulating traffic (and hiding VBIEDs) could use to be prettier, though.

All in all, Royal Marines is a fitting DLC for Afghanistan ’11. As abstracted as its depiction of situation in Afghanistan is, it gets the point of the difficulty of fighting an insurgency through well enough. The new DLC not only gives a new army to try out, but also introduces new mechanics that make it more difficult – and more authentic. Well, of course, apart of that whole “only certain vehicles can set up checkpoints” thing. That’s just silly.