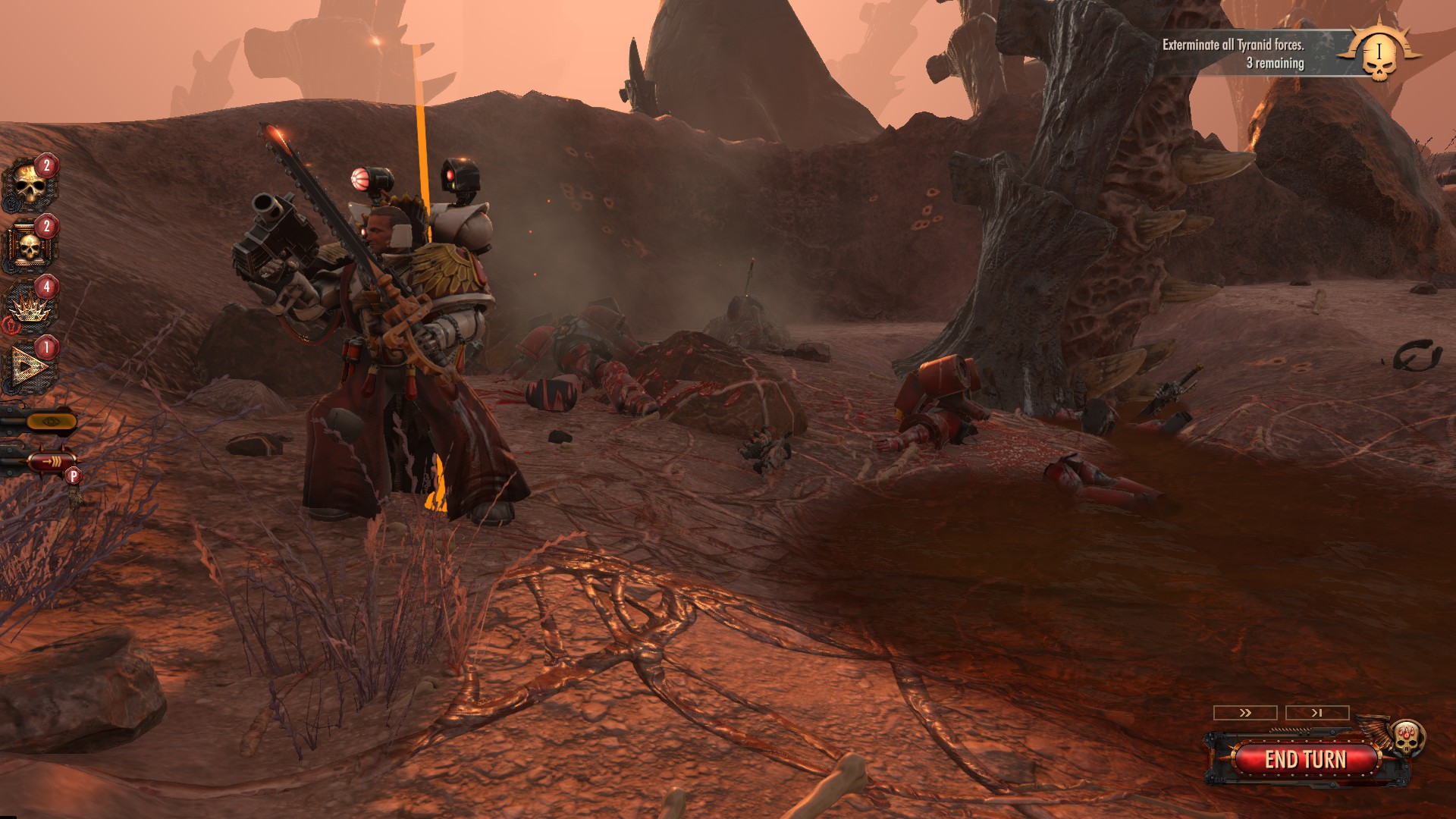 The very generic title doesn’t even hint at the game taking place on Baal Secundus, the other near-inhospitable moon that Blood Angels like. Quite recently, the Baal system was engulfed by the Tyranid (read: space locusts) Hivefleet Leviathan. Even the combined forces of the Blood Angels and their successor Chapters wouldn’t have been enough to to stop it.

But then metaplot happened: the galaxy was split in two by a giant gash leading to Hell/FTL shortcut, the Hive Fleet was swallowed by the maelstrom, and demons spilling from rend attacked Angel and bug alike. Eventually, some good news arrived in the shape the Indomitus Crusade, bringing reinforcements of  Blood Angel Primaris Marines. You’ll be commanding Sergeant Corleone, one of the survivors of the original defense who’ll have to lead his brothers on Baal Secundus in hunting down the Tyranid survivors.

For the Emperor and Sanguinius!

Everyone’s up to speed? Already accepting bets on whether Corleon will turn Primaris by the end of the campaign? Good! Warhammer 40,000: Battlesector is a turn based strategy game, where you’ll be leading units that can be a single hero, five Space Marines, or even ten Tyranids (if you would sully yourself like that in multiplayer). Each unit has an amount of movement points they can expect for movement, and usually a single action point for attacking, using powers, and so on. Heroes are notable for having more AP.

As it’s usual in TBS games, all of the troopers in a unit will armed identically, even if they have individual health pools, and attacks are resolved per-bullet. Seeing how Warhammer 40,000 was for the longest time the game where you had a lot of option for dressing up your space barbies, it’s a bit sad.

Alongside the usual things, Battlesector gives units Momentum as they kill enemy models. Fill the bar, and you can surge by getting another action point. But if you’re a hero, you can instead fire-off an empowered version of your power. Moreover, to represent the natural aggressiveness of Blood Angels, you lose momentum if you go on overwatch. Best keep moving!

Within dark and forgotten Warhammer 40,000: Battlesector hide the enemies of the Emperor

It is unfortunate, then, that Battlesector is fairly strict about unit roles. Primaris Intercessors (for old foggers: imagine a Tactical Marine unit that only ever has bolters) are shooters, and they can’t even purposefully attack in melee. They will swing back halfheartedly if attacked, but that’s that. I expected more from the sons of Sanguinus, but such is life in the TBS zone.

But as I have already mentioned, Battlesector is adamant about not abstracting attacks. Each shot fired at a unit of Termagants can hit any of their members, and any spillover is wasted. Meanwhile, our buddy the Sergeant might be a melee beast, but that doesn’t mean that he’s swing twice and kill all of the Gaunts in a squad. Better sick Assault Marines – now that’s five times the blades to slash The Worst Faction with.

Yeah, the Battlesector will have a good roster of units to choose from. A handful of old-style (“Firstborn”) Marines will be bolstered by a variety of Primaris brethren. You’ll also get such fan favorites as Baal Predator tanks and Librarian Dreadnaughts – because there’s nothing cooler than sticking a powerful yet mortally wounded psyker into a walking sarcophagus that can punch tanks in half.

Because as long as one single Blood Angel lives, he will be master of his spirit

Now one thing that we didn’t see in the previous builds are the campaign actions between the battles. Winning and fulfilling objectives will give you points, which can be spent unlocking upgrades on heroes’ skill trees. Only some those boost the hero. A large part of those trees will be dedicated upgrades for your units. This includes not only new abilities, but also new loadouts.

The new toys might be in ways superior than those that you have already, but you won’t always want to go for the newly unlocked stuff. For example, Hellblasters (like Intercessors, but all plasma guns, which always put the utility of Intercessors in question) can get heavy guns, but those have a much lower rate of in exchange for improved armor penetration and damage (yes, Battlesector gets granular). This means that it would be a waste to send the unit against a pack of Gaunts, but it will be just the thing for blasting monstrous Carnifexes off the table.

Restore the honour of the shamed fallen through the death of your foes!

Ah, but changing loadouts isn’t free. It always costs point So if a mission allows you to bring 700 points of troops, but giving Assault Marines flamer pistols instead of bolt pistols brings you to 720, you’ll need to get crafty. You might leave a unit on the bench, take a cheaper unit somewhere else, or just switch the weapons back.

Unfortunately, this is where another issue rears its ugly head. In Battlesector, your roster shows how many missions your unit has completed. But this does nothing to advance the unit in any way, not even the experience system of Warhammer 40,000: Sanctus Reach. The game itself provides no incentive for keeping the units around – they don’t even get names – except for sentimental reasons. And if a unit goes from your pool into reserves, it also loses any record they had. But who knows, maybe this will be different in the finished version.

But to end on a positive note, Battlesector can be considered the successor to Warhammer 40,000: Dawn of War 1 for one extremely important reason: aesthetics. I’m using it as a nebulous umbrella term to cover everything from having a specific storyline campaign to detailed unit models to giving you time to zoom into battles, to fully voiced narrator, and more! The only thing missing is in-engine cutscenes.

You may not know this, but I was critical of Black Lab Game’s previous title (Battlestar Galactica: Deadlock) when it was announced. After getting to play it, I came out convinced that this was the studio that should have been given the Battlefleet Gothic license (or at least handling of the gameplay part). It was strange to see them tackle a game that puts boots firmly on the ground, but the mad bastards succeeded thus far. I hope the full version continues the trend.