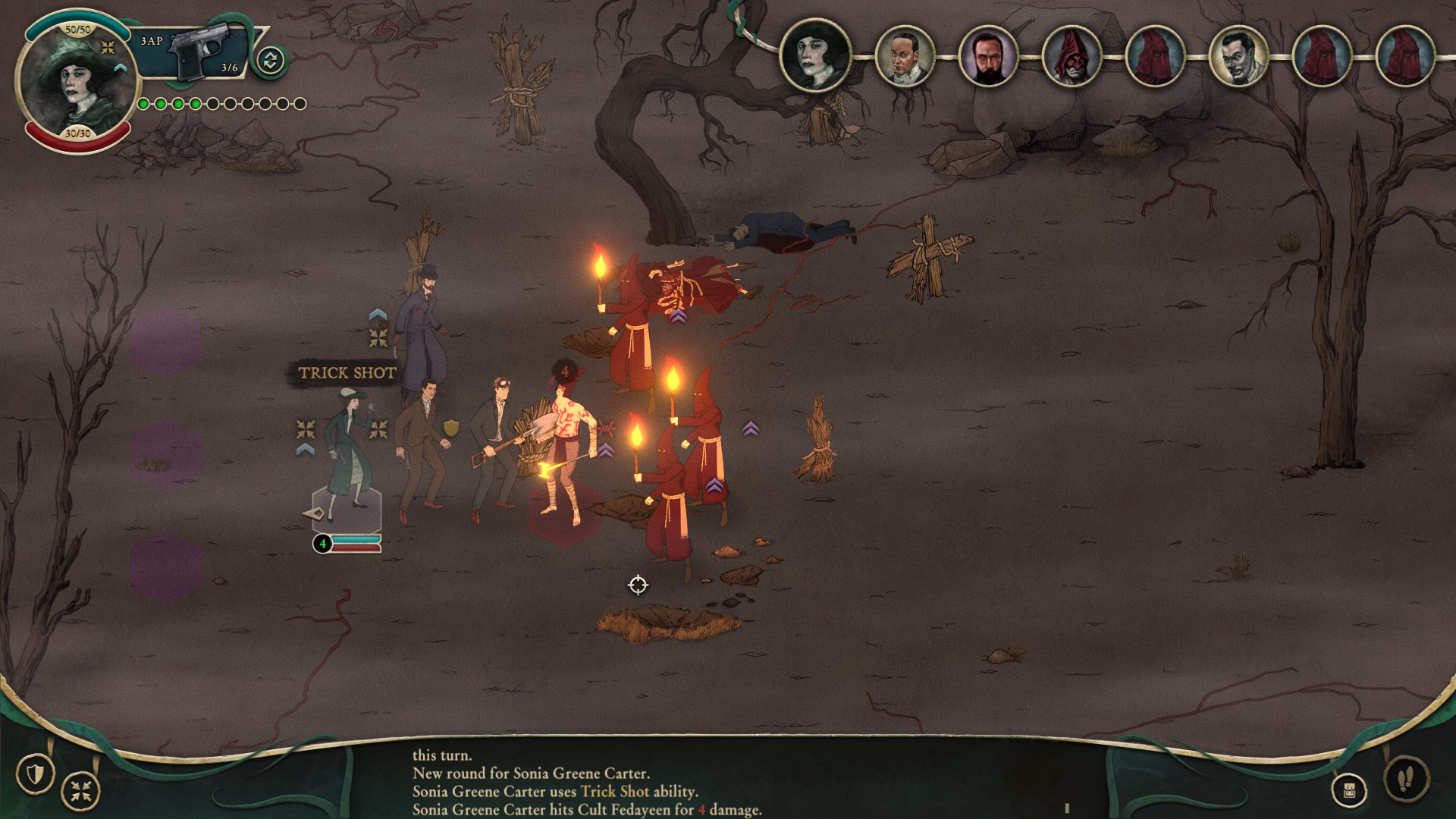 H. P. Lovecraft was a big old racist, but at least his rampant fear of Spaniards was channeled into Cthulhu Mythos, later lovingly gameified by the Call of Cthulhu RPG. However, few games – video or otherwise – plunge you straight into the world of eldritch gods like Stygian: Reign of the Old Ones does.

Usually, games set in a Mythos (or Mythos-inspired) environment has you racing to stop the apocalypse. In Stygian, it has already happened. Arkham and its environments were plucked from earthly reality and plunged… somewhere else. That was the Black Day. Some time has passed since then and the city has gone to the dogs (but mostly the mob and cultists). But one night, you receive a dream from the Dismal Man – the same mysterious figure that drew you to Arkham. Time to unravel the mystery!

Fair warning: you will not unravel the mystery of Stygian – not yet. The developers were very frank about it in one of their last pre-launch Kickstarter updates.  Instead of the planned 50-hour adventure, Stygian will allow you to experience a 15-20 hour piece of it. I didn’t know that before finishing the game, so it felt a bit abrupt, leaving many loose ends and expectations in the air.

But did I enjoy the game? Carcosa yeah, I did.

But how do I get myself into this mess?

Stygian: Reign of the Old Ones provided me with about 16 hours of premium entertainment immersed in old school sensibilities without being slaved to outmoded gameplay conventions “just because how it’s done in the olden days.” Most of the time, you’ll be traversing the game areas, rummaging for loot and talking to characters. Sometimes, you will engage in world-map travel (ft. random encounters). You will also partake in turn-based battles. A good time will be had by all (players, not game characters).

To start your journey in 1920s apocalypse Arkham, you will have to first create a character. All Archetypes (classes) are open to both sexes – sure, women weren’t really a part of, say, US military way back when, but RPG characters are snowflakes and weirdos anyway, so who cares? The only downside is that “flapper” isn’t a possible background (sub-class) for the ladies.

Archetypes draw on the usual pool of Gilded Age characters that stumble into unnatural adventures: Aristocrats, Scientists, Soldiers, Gangsters and so on. Each of them offers 4 backgrounds: one that is the vanilla version and three that offer certain bonuses in exchange for a flaw. For example, the movie star background for Performer gives you more sex appeals – and greater susceptibility to addictive substances.

Stygian: Reign of the Abyss also has you choose your character’s age category: younger ones get better attributes yet fewer Skill points, old ones – vice versa. You can also be of average age if you’d like to start with no drawbacks.

The game also has 6 morality systems to chose. They’re mostly there to determine your additional sources of Sanity regeneration. If you’re a Humanist, choosing dialogue choices that espouse the strength of the human will, you’ll regain a few points of Sanity. If you’re Pious, you can read the Bible (KJV, obviously – this is America) and pray during your rest periods to regain even more sanity.

A note on Sanity, by the way: in the game, it acts as your other healthbar. Run out of HP and you die. Run out of sanity, and you’re permanently insane, which is basically the same as dead. However, Sanity in Stygian doesn’t work like SAN does in, say, Call of Cthulhu. It’s easy to lose, but it’s also easy to restore. This is a necessity because Occult-oriented characters also use it as their mana pool.

Fun fact: you can crash the sanity of your human enemies in combat.

For a more SAN-like system, you have Angst. You can’t reduce it and it’s accrued in a similar way to XP. However, while reaching a new character level gives you points to spend on Skills and allows you to choose a single Trait, reaching a new level of Angst forces you to choose a defect. These are various derangements that negatively affect your play. It’s easy to single out which are the worst ones and then not choose them.

Criticism? In my review?

It here where I feel the need to criticize Stygian, as Sanity and Angst seems misnamed. If you had Stress instead of Sanity and Sanity instead of Angst, that would make more sense. It would also help to have morality-abiding dialogue choices affect your Angst score instead of Sanity. As it currently is, the Sanity gains from dialogues are just drops in a bucket, far outmatched by other ways of regaining it (like booze and laudanum).

You’ll usually lose Sanity (and gain Angst) by witnessing horrific events – Arkham is not short on those, from mob violence to more supernatural happenings – and fighting otherworldly foes. Your human opponents will take a sanity hit every time you cast a spell. A lot of Angst is also generated after the end of a fight.

Right, battles. Just because the Elder Gods are incomprehensibly powerful compared to mere humans, that doesn’t mean you shouldn’t stab their servants or random crazies. The battles in Stygian: Reign of the Old Ones take place in hex grid arenas suitable for the current exploration environment. They’re small, no bigger than a single screen span. You may have cover and interactive items scattered through it.

You characters will act according to their spot on the initiative track – unfortunately, you can’t postpone your actions for later. Each combatant will have a number of action points to use for movement, attacks, item use and so on. Any leftover AP can be used to boost either your defense or attack next turn.  Various conditions and modifiers can affect both your initiative and the number of action points. Of course, you don’t want your characters to panic or go insane.

In Stygian, you will never see the enemy’s health bar. Instead, you’ll see a number of grazes inflicted on a foe, which represents the level of their injuries. It’s a relative method of measurement, so a single scratch on a mobster is different from one on a ghoul. Many grievously injured enemies will try to retreat and escape.

You can turn tail and run as well! It’s one of the ways to save a hurt character (Stygian doesn’t bother with unconsciousness – it’s all about instant permadeath), save your resources, or just avoid a fight you can’t win. Just navigate to the purple hex (usually situated almost immediately behind you) and you’re free! Then again, you don’t really gain XP and loot that way – or make progress in exploration. However, if you can hold out till the teal Progression escape hexes appear, you’ll get as much XP as you would for winning and the game can progress normally.

Running away wasn’t always usefull in my playthrough, as Aristocrat Archetype cheats (like 1% always does) and starts the game with a loyal butler Companion (a plot-important NPC), who is meatheaded beatstick, which makes battles a lot easier.

All in all, fighting in Stygian: Reign of the Old Ones doesn’t take too much time, you don’t need to optimize your characters too much, and it’s fun. Most of the time, you’ll be using the best civilian weapons you can buy or scrounge. Heck, my butler spent a really big part of the game whacking enemies with a shovel (both a tool and a heavy blunt weapon). And let me tell you something, there’s a lot of joy in seeing some monstrosity from beyond time and sanity collapse after a good, hefty shovel whack.

However, you will need a lot of help to deal with the creepy crawlers out there. Luckily for you, the mob has control of Arkham and your character can finally put “hero” back into “heroin.” Laudanum is the closest this game has a health pack (restores a moderate amount of health and sanity, only mildly addictive),  but you will want to boost your fighting potential with cocaine, opium and wine (with cocaine). Towards the end of the game, you’ll be facing horrors from beyond without flinching, because you’ll be high as fuck (and possibly drunk – alcohol restores sanity without the need to rest, albeit with a penalty to your senses).

Speaking of rest: that is what you will be doing when you’re ragged from fighting and exploring. Even if you don’t see or fight anything horrible, your characters will get tired. It’s also more than likely that they WILL see or fight something horrible. And one of the greatest ways of restoring both health and sanity is to catch a few Z’s.

But rest in the game is closer to the involved camping activities of Expeditions: Viking that simple snoozes of The Elder Scrolls. For each rest, your characters (so you main char and NPC Companions, but not the single NPC henchman you can have) will have an action point pool. Those can be spent on rest activities: research (of occult, science or medicinal type), reading appropriate books, praying, gambling and so on. It all depends on the skill and inventory items you have. And no matter what you do, you’ll awake no longer tired, and maybe even fully healed.

But only death is easy in Arkham. To rest at a hotel bed (well, something approaching it), you’ll have to pay an amount of money (cigs – it’s a cigarette-based economy now) that’s just big enough to not be trivial. If you don’t want that, you can rest a campsite (next to some hobos), but you risk a combat encounter and you need to have camping supplies (I was playing before the pre-launch patch, so those supplies were only consumed while resting on the world map).

Going where no man should

Afterward, you’re back to exploring and talking to the folks! All interactive (read: lootable) items in the environment can be highlighted by pressing “alt” while mouse cursor changes contextually. Most of the time, it will allow you to examine non-interactive elements of the environment, rewarding you with well-written descriptions of what you see. It’s very Fallout 1/2 in that regard! For some items, you’ll be able to bring the radial menu, which will allow you to use your skills – provided they’re high enough.

But you know what will never hint at stuff you’re missing out for not having the right skills? Dialogues. If you remember newer Fallouts, they just grey out the options you can’t choose due to lack of skills. In Pillars of Eternity, they clearly explain what skill/trait you have to have to actually use the currently-unavailable dialogue options. In Stygian: Reign of the Old Ones, you can only guess at what you’re missing out on – only the dialogue options that you can use due to having a skill are marked. It’s a tiny bit of obfuscation, but it makes the world seem more real and less gameable.

Speaking of the game world: Stygian: Reign of the Old Ones is entirely in 2D and it’s glorious. No effort was spared to illustrate this vision of apocalypse set in the 1920s – the result of such work is evocative and beautiful to behold. It’s lifted to greater heights by it’s writing, in both environmental (and inventory item) descriptions and dialogue. Now that’s some good old-school approach to game design and I love it. The audio is great, in that it never grew tiresome, and voice acting is sparingly used. If I had to criticize anything, it’s that some of the guns sounded somewhat flat.

Stygian: Reign of the Old Ones is a pleasure to play. The game developers took pains to make the gameplay accessible to whatever character you make, allowing you to progress through guile, crafting or just sheer brute force. While its story is left hanging in the air, the experience is well worth it and I loved playing it.