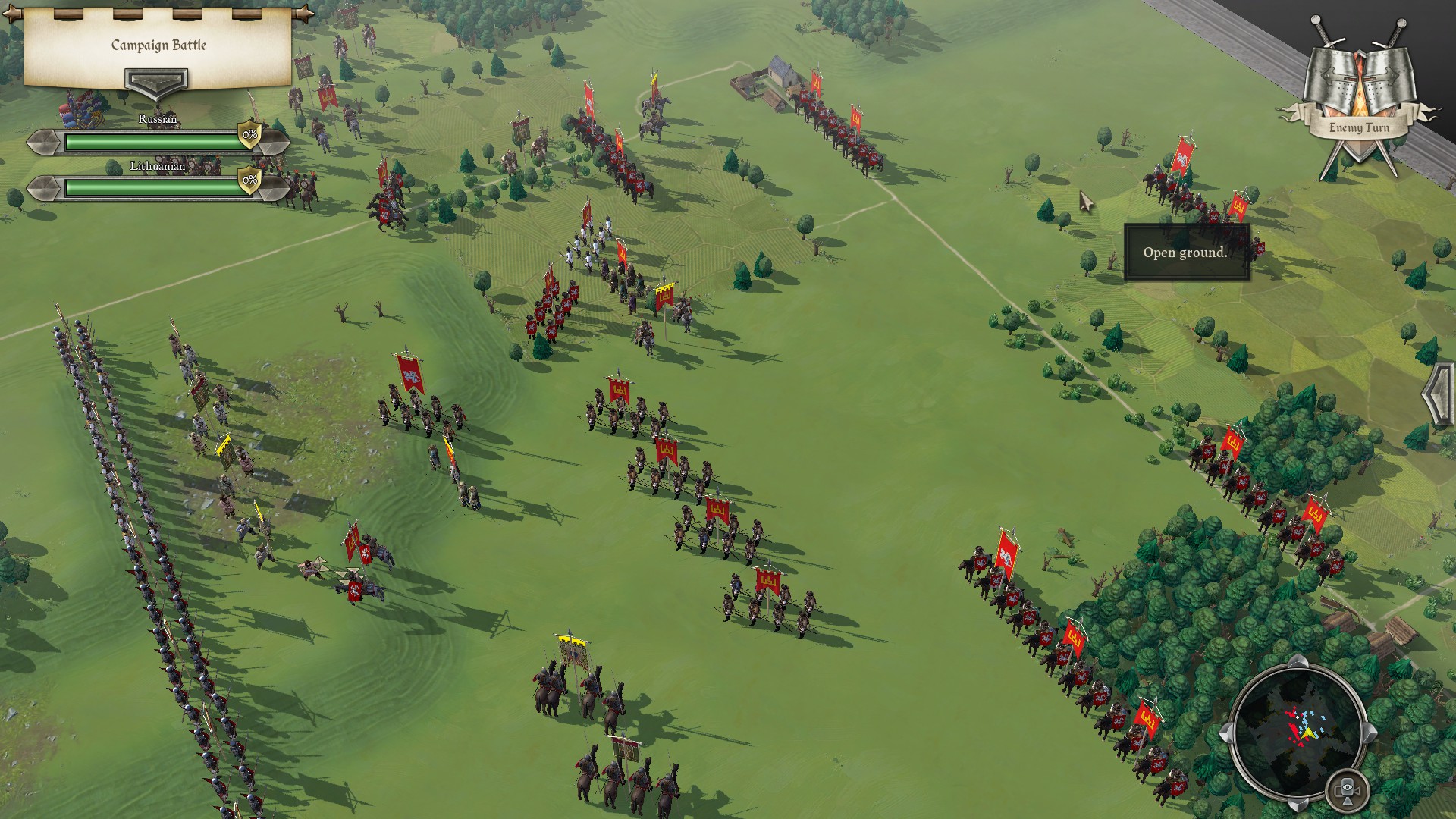 The nice thing about tabletop miniature wargames getting the video game treatment is that the computer has to learn the rules, not you. Also? No need to paint miniatures! Those are just a couple of reasons why it’s cool to have Field of Glory II: Medieval at our fingertips.

Now, traditionally, the first paragraph after the intro is dedicated to the plot. In this case, it’s a bit hard to do as Field of Glory II: Medieval is set in a period rather than following a strict narrative story. Welcome to the High Medieval period, situated between 1000 AD and 1200 AD (roughly). You want to take a European army of the period of a spin? You can! The Irish, Novgorod, the Teutonic Order, the Free Canton, the Baltic tribes – all these and many more armies are in the game. Take control (or take them on)  in scenarios and campaigns both bespoke and player-customized.

Due to its lineage setting roots in a tabletop miniature wargame, Field of Glory II: Medieval is a turn-based strategy game. You get your turn and you can move your entire army on the field of squares (not hexes). Your army is broken down into units. Each occupies a single square, and can range from 60 cavalry to 500 peasants.

Some units will have embedded commanders – either the Commander-in-Chief or one of his Sub-Generals. They gives them a boost in power and act as beacons for rallying and command. Those generals may or may not die when the going gets tough. Such is the price of glory (and desire to have more fields).

Field of Glory II: Medieval makes the process warfare that much easier by showing you the odds of victory, draw, or loss for every potential attack. This means that you don’t have to know the unit stats by heart – you’re given all the information you need.

The few stats that exist can be easily interpreted without reading the manual. Maybe it’s my historical background, maybe my experience with Field of Glory II, but I can probably tell that undrilled, unmaneuverable heavy foot won’t be the most nimble unit on the field, nor that it will do well while stuck in a forest.

Is Field of Glory II: Medieval the Medieval II: Total War of our day?

What I’m trying to say here is that this grog medieval battle game is easier to get your head around than God-damn Total War. I checked: units now-a-days have seven general stats before you get into attack capabilities. There’s no benchmark to know whether your dudes are good or not either.

Meanwhile, Field of Glory II: Medieval tells you, in simple words, that this unit is of Average Quality, that one’s of Superior – you probably know which one will come out on top. Remember: you’re given odds of any given encounter, and if you want more information, there’s a whole damn sidebar dedicated to hunt for information in.

Not guts on the field, no glory

However, melee leads to probably the most game-y thing in play. Once a unit is stuck in melee in Field of Glory II: Medieval, it will stay there until someone falls back, routs, and so on. And if it’s stuck in melee, it will have to fight every turn.

Therefore, if it’s your turn, it’s beneficial to be deliberate with sequence of melee fights. Maybe, just maybe, you can get break a weak unit, which then routs and unnerves a nearby unit of housecarls. This will make the subsequent brawl with housecarls easier for the unit stuck with it. It reminds of the current Age of Sigmar thing where the sequence of melee resolution matters, but this implementation is better in every way.

Of course, there are more times when you lose full control of your troops than just melee. For example, cavalry tends to do the historical thing and go on to pursue units that break. Not that great when it happens to your expensive knights! Yet it can be a blessing when the opponent’s heavy cav with the embedded C-in-C runs off after some spearmen, abandoning the main brawl.

Now that we mentioned unit types, Field of Glory II: Medieval has a nice way of preventing the issue of Total War “all horse archer” armies. How? By putting hard limits on what you can take. While units in the game feel fairly generic at times (especially when it comes to spearmen), each army has set limits of what it can take and how much.

Playing Novgorod? Hope you like medium cavalry, because the historical nation did – you’ll start with three* mandatory units already subtracted from your point total, and you can buy ten** more. Wanted to flood the field with infantry? Should have chosen something like Sweden, ya dingus.

I love it. Broken spam armies plague games both on the physical and virtual tabletop, and when the only limit is money/points, then there’s nothing stopping the players from being little gamey shits. But both limiting units and imposing mandatory ones are some great ways to deal with the issue.

I can almost remember the times when this was a thing in Warhammer 40,000, and mandatory cores work marvelously in Lord the Ring/Hobbit/Middle Earth Strategy Battle Game Battle Companies as well as Chain of Command. Take heed, game designers!

Onto more technical stuff, I’d say that Field of Glory II: Medieval looks and plays decent. If you adjust for the grog-game context, it looks good. This isn’t unity of command, but I love those formations, how they fill the squares and mill about. I love the casualty numbers and notifications rising above the units. I also love the sounds, both the music and the clash of battle, or the trumpets that signal a rallying unit.

All things considered, Field of Glory II: Medieval is a very decent title. Sure, maybe you’d love to have more units in rosters closer to you heart (Lithuania, I mean Lithuania). But those are the risks of playing historical games – there might not be that much data about the real colorful stuff military stuff. Or maybe your country was just that boring! Whatever the case may be, I can’t wait for it to get the Empires treatment.

*Don’t at me if I got the number wrong
**Ditto