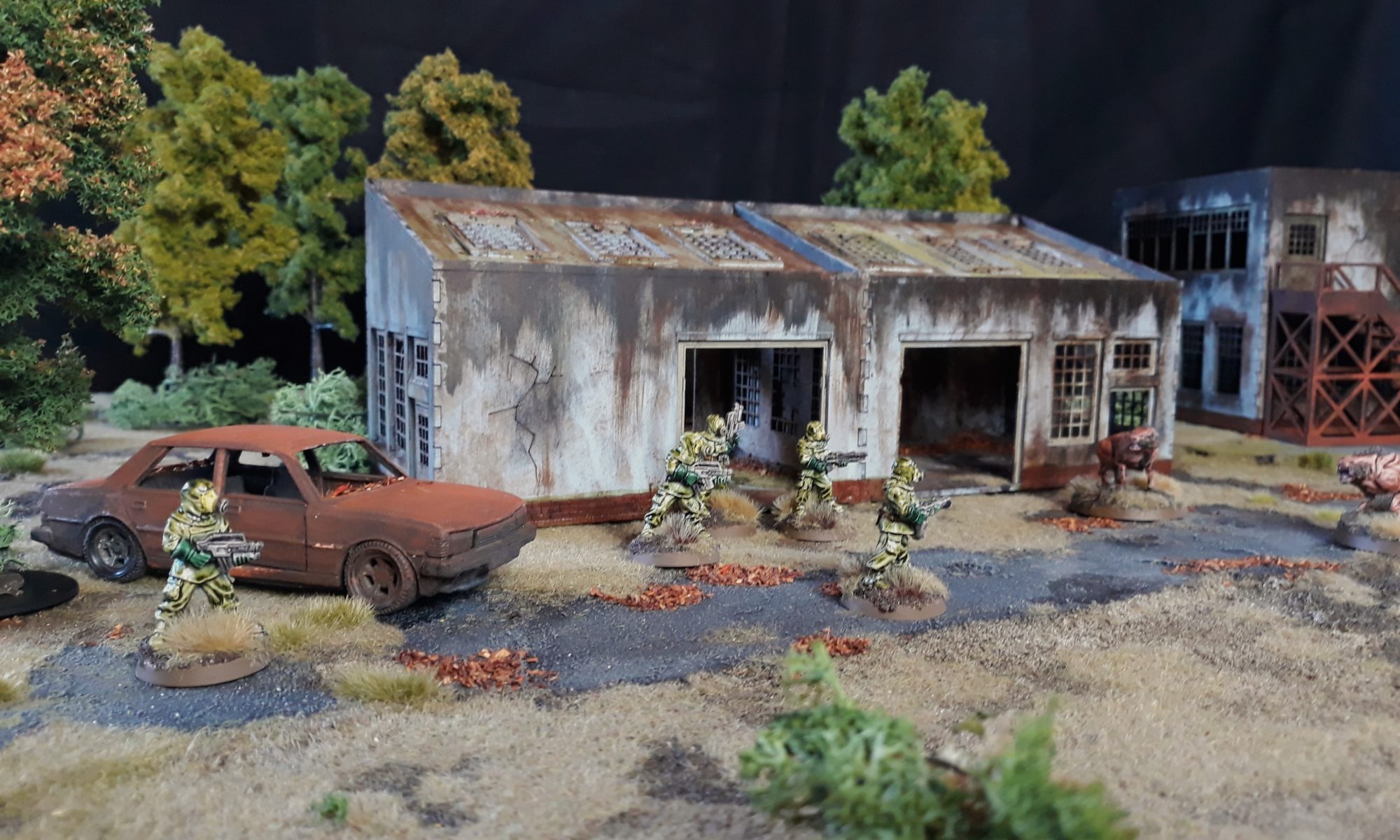 Ever since STALKER (the video game) was released, nerds wanted to play as tiny metal (let’s not kid ourselves here) Slavic people who run around abandoned areas rife with anomalies while dressed in milsurp rags and armed with clapped-out AKs basically. Zona Alfa from Osprey is probably one of the best ways to scratch that itch. I played one game of it, which makes probably too qualified to talk about it.

If you have ever heard of all-caps STALKER, then you know the premise. There’s a Zone, the Zone is filled with anomalies and mutants, and you’re some schmuck out to extract artifacts. There are many gits like you, and quite a few of them are willing to shoot you over the paracausal tumor you just found under a rusting Lada hull. Well, in Zona Alfa, you control a whole damn team of people like that keeps end up fight similarly equipped groups.

So, you know, this is a much more narrowly focused, but a lot mechanically looser game than This Is Not A Test. It features alternating activations, during which a unit (a miniature) can perform as many actions as their rank allows them. This is an important distinction, as Rookies – the lowest rung of soldiers available – can only perform an action a turn, which means choosing between moving and shooting.

Gathering some boys for the fight

This is probably the hardest cap against running a crew of a single badass (the Leader is always and immutably the toughest bastard around) and nine tuberculosis-ridden orphans. You definitely want Hardened (2 actions) and Veteran (3 actions) dudes with you. Teams are costed in those actions, with 12 being standard. Your leader invariably eats three of those, but the rest are up to you mix

Since Zona Alfa is unbearably Osprey/gentleman/grog, that’s about the extent of balancing that team building subjects you to. The gear? Each rank comes with default armor, but for the rest, you have very generous allowances.

For example, everyone in Zona Alfa can get a ranged and a melee weapon (some of the former are actually very short-ranged firearms). Are there any limitations? No, just those types, so you can immediately jump into min-max number crunching to work out the optimal choice if you want to.

Or, like, strike out with a team armed with LMGs, nothing’s stopping you. Same applies to skills, grenades, and the rest of equipment – just stay within the character allowances, and you’ll be solid.

Oh, and you have to pick a faction for your team, which features such STALKER favorites like bandits, scientists, and the military. What do you get? Yet even more free gear to dole around, and then some benefits that only matter in campaign play.

So that lack of hard balancing is a bit of weirdness that makes Zona Alfa unsuitable for pick up games with randies, but let’s be serious. The further you go from Games Workshop, the less likely you are to do gaming hookups with random johns off the street. If you’re playing Osprey Games, you’re playing it with people as exotic as you are. In that case, if your friend is spoiling the fun with min-maxing, then maybe it’s time for a bit of an adult talk, isn’t it?

The manifold dangers of operating in Zona Alfa

Anyways, back to the game. Once on the field, you’ll be shooting the opposing team, investigating the objectives, and triggering anomaly nonsense. We didn’t get into the real Zone weirdness in my introductory game, but I did experience hotspots spawning mutated critters.

Luckily, they activate after everyone else, so instead of getting your plan violently torn apart by glowing dogs, you are left with a tactical dilemma – especially since your opponent will get to control the monsters closest to your troops.

Of course, such dilemma can be solved by shooting someone in the face, and the battle actually moves at a steady clip in Zona Alfa. The most involved part is calculating the bonuses and penalties for your shooting and armor save rolls, but it doesn’t take too much time. There’s no constant falling down and getting up like in Necromunda. However, an Infinity-like “now that my armor stopped a bullet from piercing my flesh, I’m suddenly feeling the weight of my mortality” morale check exists.

Unless you have a medipack, failing an armored roll in Zona Alfa essentially means losing a miniature. No faffing about with wounds, recoveries and other nonsense – except for the Leader, who’s a 2 wound fatass, and even his stats drop in half once he’s wounded.

The lesson here is, oh my God, definitely take medikits on everyone, those orange plastic rectangles with expired syrettes of Soviet morphine will keep you going. It helps that equipment doesn’t compete with grenades for equipment spots, and with every soldier getting two grenades each at the start, this is probably the most grenade-happy miniature game I’ve ever played.

All in all, I’d say that Zona Alfa is worth a shot. It’s balanced about as well as Necromunda, but almost intentionally so, and… OK, it’s probably balanced better than Necromunda, if only because you don’t have to flip through eight books of feature creep to catch all the nonsense. As far as excused to get some metal AK-slinging miniatures go, it’s not half-bad!