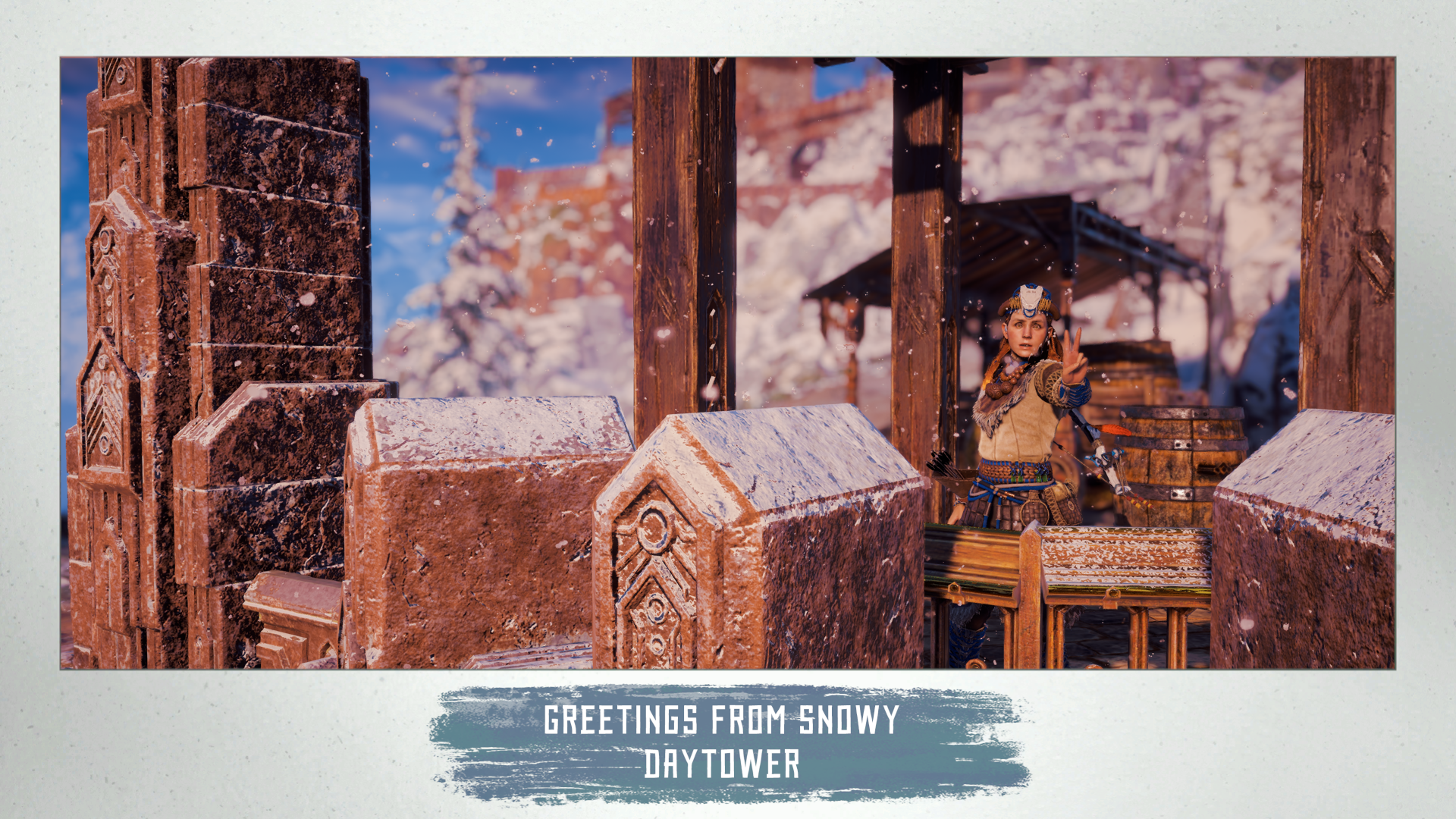 Premier robo-animal hunting game Horizon: Zero Dawn came out in the blighted land of the consoles back in 2017. It only reached PC in these the darkest of days. And what can I say, folks? It was well worth the wait. Especially since we got it with The Frozen Wilds DLC from the get go!

Never heard of Horizon: Zero Dawn? OK, catch this: it’s post apocalypse. Humanity has been reduced to moon-worshipping savages. Also, those moon worshipping savages are hunting the robotic fauna that’s overrun the land. It’s not just meme-dinosaurs – most of the cybernetic critters take after wolves, rams, deer, and so on.

Into this world is born Aloy (come on), looked after by Rost (COME OOON), a man outcast from the Nora tribe. Adoptive father that he is, he is not privy to the secrets of Aloy’s birth. Nora don’t talk to outcasts (it’s their law), but even an outcast kid can attend the Proving and become a tribe brave. Better yet, the winner can get one wish granted – you don’t need three guesses to know why Aloy would want that. But that’s just the begging of a story that took me 70 hours to complete.

We invented a more dangerous game to hunt

You could describe Horizon: Zero Dawn as a third-person shooter, though third-person action game is more accurate. The hunt, after all, involves careful preparing potions and setting of traps! Oh, but Aloy will not want for shooting implements: hunting robots is a tough job, and you get a four-slot weapon wheel to see it through. Aloy also has her trusty spear, but, ugh, you don’t want that one to be your primary defense against Boston Dynamic’s far-future offspring.

Like I said, hunting robots requires preparations. Sure, as Horizon: Zero Dawn goes, Aloy will swell with HP, skills, better armor, and cooler weapons, but cyber-critters will always pose a danger. The bigger ones – or ones that don’t graze alone – will require either seeding the area with traps beforehand, or reflexes of a greased lighting. To level the battlefield, you’ll have elemental traps, elemental trip wires, elemental bombs, and so many varieties of trick arrows that you’ll need three different types of bows to fire them (this isn’t a joke). You’ll also need a variety of potions to hears or resist the harm that bionic animals send your way.

Shot through the heart, Aloy’s to blame

Luckily for you, Horizon: Zero Dawn’s metallic beasts aren’t just HP sponges with elemental weaknesses. Their bodies are studded with components. Some of them are just armor, hiding the vulnerable synth-muscle underneath. Some are guns or power elements for fancy attacks. It is in stripping these parts while the beast still lives that you’ll do majority of your damage.

Of course, exploiting elemental weaknesses serve a lot to fulfill that goal. A monster with canisters of Chillwater on its back is probably resistant to cold damage… but not when it’s dealt with by an exploning semi-internal component! Frozen beasts take more damage from all sources, electrified ones get stunned for a time, and the ones on fire… well, they’re on fire, how much more explanation do you need? Sure, you need to hit an exposed canister with an arrow of a matching element, but then it will explode, dealing AoE elemental damage.

This, however, destroys the canister, which is somewhat inconvenient when you’re hunting robotic elks for their precious Blaze used in all sorts of fiery implements of the hunt. Early in the game, you’re kinda incentivized to think about the balance between dealing damage and walking away with ammo-crafting materials. Later on, you’ll be flush with either resources or money, making it a lot less important.

Who knows, if you match all those tricks with enough stealth, maybe you’ll kill an entire heard before it realizes what happened!

Stealth is also important when dealing with the human enemies in Horizon: Zero Dawn. Those will quite often appear in base-like circumstances, so raising the alarms (sometimes literal ones) doesn’t bode well. Remember: robotic beast attacks hurt you, but so do arrows. Sure, you’ll need a lot less effort to kill humans – headshots work majestically – but there will almost always be a lot of them, some of them will use elemental arrows, and you’ll have less space to maneuver.

Oh, and biological animals also exist in Horizon: Zero Dawn, but they’re no threats. They’re more like ambulatory medical plants. Medical plants also come in, well, the usual variety, and here’s one of the cooler aspects of Horizon. While health potions exist in the game (three kinds of them!), your most efficient healing comes from your medical pouch. Each plant fills out a set percentage of the pouch, and you can use the pouch for some quick, over-some-time healing.

The pouch medicinal plants are also one of the few resources you can’t purchase in Horizon: Zero Dawn , which makes regular traveling a good alternative to fast travel. Even then, fast travel isn’t really free in the game, so you’re more incentivize to walk (or ride) to most places. Which is nice! The world is beautiful and footing it gives you chances to hunt for other resources, find collectables and text logs,  or maybe get into to trouble along the way.

And now, a word from our long-dead sponsors

But not much of that would really matter if not for two things: the writing and attention to detail evident in Horizon: Zero Dawn’s l. While it’s no Disco Elysium, it’s still a well-written game for a third person robot hunter. Both the current life of tribals and the history of pre-apocalyptic humans are fleshed in great and fun detail. You have interesting supporting cast, doubtful allies, fleshed-out questgivers (with stories that enrich the world) and more.

Maybe there’s not enough development given to the main (as in, “defeated via boss fight”) villain of the game. On the other hand, Horizon: Zero Dawn also manages to present to you a secondary villain that you can’t interact with, and I hate him more viscerally than I hated anyone in a game in a long time (people who completed the story can probably know what Thebes-inhabiting asshole I have in mind).

And there’s effort put into characters and the way they interact with the injustices of the world. Sure, the Nora are a fiercely matriarchal tribe, but Aloy is an outsider who doesn’t buy into that. This also gives her a healthy disdain of law and tradition as she was hurt by both. Outside of her tribe, she gets to meet a lot of women forging their own paths in patriarchal societies while also combating sexist she is faced with.

I wonder why I didn’t hear the cries of “SJWS ARE RUINING ROBOT HUNTING” back in 2017 – are the console chuds that isolated? Because this game should have boiled their blood.

Meanwhile, Horizon: Zero Dawn pleased me with pretty much everything. DLC material is seamlessly integrated into the main storyline. The game constantly offers callbacks to earlier experiences in adventures. Just like in history, everything that has come before influences what comes later in the game. All in all, I could only be more pleased if saving the outfit a tribal gifted at the start of the game would result in some sort of reaction in the end.

Wish I was killing a robot deer instead

Boy, this is not easy. Writing about good games is generally harder than it is about the bad ones. You can usually easily tell what makes a game bad, and it’s a lot easier to write in an entertainingly angry fashion. Good games just have this je-ne-sais-qui, especially when it comes to things outside of mere gameplay. And since Horizon: Zero Dawn ups the ante with some many features that fall outside “see robot → shoot robot” loop, it’s hard to adequately express the fascination.

The visuals, now there’s something I can talk about. In general, the Horizon: Zero Dawn looks great in all aspects. The natural vistas that surround you are amazing, and no less pretty when you’re up close. The areas of the world all have their own feel to them, and while not all settlements are unique, plenty of them have their own thing going. The designs of the robot fauna are great, drawing on biological shapes yet utilizing them for machine purposes.

There’s also a lot of thought put into the design of the tribal clothing – not only Aloy’s outfits, but also the looks of the many people you meat. You know how post-apocalyptic humans often wear decorations of animal bone? Well, imagine what would happen if your animals were all metal? And of course, some people of the land are more… I dunno if I can say civilized than others, but certainly higher up the tech tree – and their clothing reflects this.

However, there is also a downside to the visuals: the facial animations. Anywhere outside the main plot missions, Aloy talks as if her jaw had been wired shut, making her seem angrier than she is (then again, she’s a teen who grew up in isolation, so she’s kind of an ass as well). And while the game gives her plenty of well-modeled women to talk to, the facial animations can do a number on their faces. Animations definitely improve in plot cutscenes, and especially in The Frozen Wilds content.

The hills are alive with the sounds of vaporwave

Now, the audio part is generally great no matter where you go and what you do. You have an unmistakable audio cue for when you hit robot components, and you can definitely tell when your health pouch is doing its thing from the sound it makes. The beasts are always stomping or whining electrically to let you know where they are, and you can always tell when an animal is nearby from the noise they make running away. The music is generally pleasant, though not very memorable – but at least it didn’t get annoying in the 70 hours of the game.

I do have to say that voice acting is good all the way through – and hot damn, there’s a lot of voice acting. The cut scenes, the dialogues, the random bits you hear from nameless NPCs, the collectable logs… and then Aloy also talks to herself all the time. Those are mostly quips about the conditions surrounding her, but hey, it enlivens the experience.

Ah, and before I conclude: if this blog post gets 3 readers, one of them will complain that I didn’t talk about the technical woes of Horizon: Zero Dawn. Well, It Works On My Machine, though it did have some issues at the beginning, before the launch. I had one crash, and the the game would sometimes ground to a halt before resuming (probably loading the world?), but I think the performance got better around the time of and after the launch.

With that in mind, I wholeheartedly recommend Horizon: Zero Dawn. It has been delivered from the greedy clutches of console gamers and we’re all the better for it. God damn it, who gets to put in 70 hours into a non-multiplayer, non-JRPG, non-survivacrafter these days? It’s an amazing achievement in and by itself! So what are you waiting for? Horizon Forbidden West is due to appear in 2021, you don’t have time to waste.