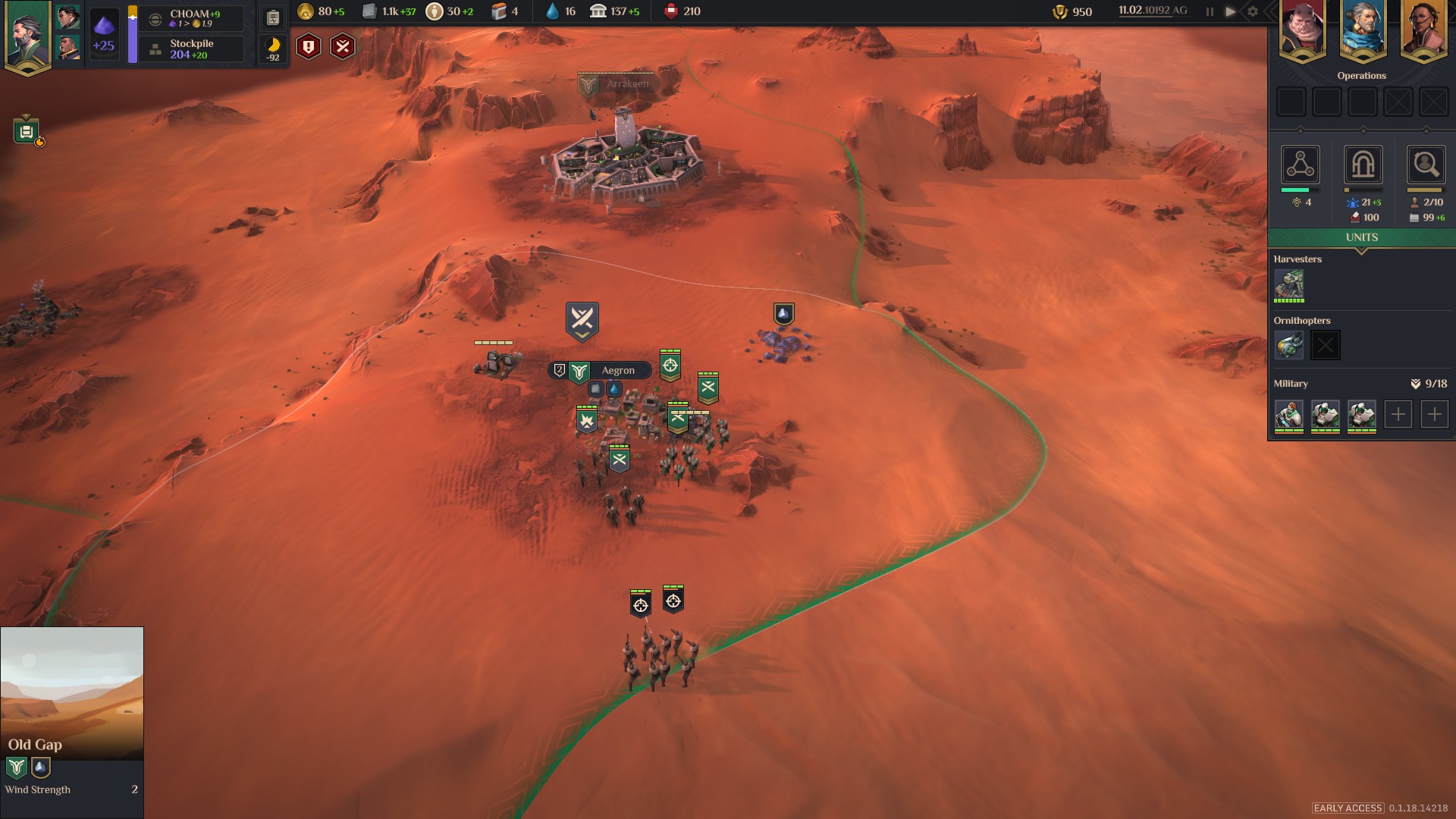 Outside of mods, we haven’t had a Dune-based game since 2001. But the new movie adaptation makes it a lucrative time to get in on the Arrakis action. And it’s a good thing, too, as Shiro Games brings their Northgard experience to the front in Dune: Spice Wars, which just entered Early Access.

For those who don’t have genetic memories of generations of their mothers unlocked, Dune is a setting centered on the planet Arrakis. For while there are more hospitable planets in the Empire, none of them produce Spice, a material that famously extends life, expands consciousness, and is vital for space travel. We have already fought alternate versions of the conflict depicted in the Dune books in other games. And this time, we’re doing it as either the Atreides, the Harkonen, the Smugglers, or the Fremen.

Having never played Northgard, I’m going to compare Dune: Spice Wars to Sins of a Solar Empire – they’re both very much 4X real time strategy games. But while SOASE really focused on combat and base building with its burgeoning roster of ships and star bases, Dune sticks closer to less technically complex battles of most regular 4X games.

The tricky part is describing why in a coherent way, because the game has a lot of moving parts, albeit all of them are individually fairly simple.

The map of Arrakis (randomly generate) is split into regions, each of which (or at least most of them) having a village you need to conquer to control it. Units can move around freely like on any RTS map, though travel outside friendly territories saps supplies (and if that runs out, health).

So right away you can see that you don’t have the (fairly tedious) colonization burden of most 4X titles. You’re also unshackled from the drudgery of lining up build orders for 20 turns ahead for every new settlement, with hopes that it will become a useful part of the empire some day.

No, in Dune: Spice Wars, a village has a two free building slots, which you can expand to five with ever larger investments in plascrete. Some regions make certain buildings more desirable than others, and all of them are jockeying for space.

Surprisingly enough, you do have to put those buildings on the map rather than abstracting them away into the city hex like most 4X would do. I think it mostly matters due to airfields and missile turrets. Both of them cover circular areas that take no heed of region boundaries. Thus, their actual position – in the small radius around the village where construction is permitted – matters both offensively and defensively.

Thinking about that desert power

This is especially important since the armies of Dune: Spice Wars are miniscule. At some level, they don’t even need to be; you can build AI-controlled militia to garrison villages, yet any militia unit is most likely inferior to any regular soldier. This makes small raids easier and also ensures that AI will always build a missile turret in every village (you can’t double up on most buildings).

At the same time, you can scarcely afford to waste your forces in a bajillion failed raids as the units are built fairly slowly while also costing a pretty penny. They’re also only ever trained at your central base, and the build slots are limited (and so are command points, and the resources you pay for upkeep). Thus you have to be smart with when and where you employ them. They’re also fairly slow, so airfield coverage is of paramount importance for shuttling your troops around.

Also, walking any force over the sands is likely to attract the worm, and I’ve lost more dudes than I’d like to the emerging jaws of the Maker.

At the same time, unlike you’d see in hex and chit games, terrain plays almost no role in how units fight – and they only have a few stats per. So where does the sophistication of the Dune: Spice Wars combat system come from? Well, part of it I already described: you have to be very deliberate with how you use your limited forces.

Make that Master of Assassins work for their spice

The other part is shenanigans. Mostly empowered via intelligence operations, they allow to shape the battlefield, granting debuffs to enemies in a region or bestowing health and supply regeneration to your fighters. You can also do things like incite rebellions, thus dividing enemy attention, or touch off family atomics (which is a big no-no).

And then you get back to other economic considerations. Merely besieging a village cuts its production by half – and that’s before you start burning down buildings. Set off a rebellion and raid a few frontier villages and you can put your enemy in a very uncomfortable position, especially considering that running out of any resource in the game comes with interesting negative consequences – especially when some resources can’t even be pooled to withstand starvation, you either have them or you don’t.

Spice, is, of course, important, only appearing in rare regions, and collected with harvesters you have to actively recall in case of a worm sign. There’s an autorecall function as well, but it decreases harvesting rates, so you have to be the real judge of whether that’s worth not having to bother. Remember, you can’t spawn new spice fields, and you can only increase the efficiency of existing ones that much.

In fact, the easiest way to get more spice extraction in Dune: Spice Wars is to increase crew capacity of harvesters… but with each crew costing 50 manpower (you can pool 500 at max), and a harvester carrying up to four, losing a harvester can be really painful.

Spice is used to pay a regularly increasing tax as well as being the payment for some in-game quests. Later in the game, you can even use it to recruit temporary mercenaries if you find any in the field (Dune features quite a few type of Civilization-village equivalents, always brimming with goodies, and randomly spawning throughout the game) – and investing 300 spice to get 9 disposable units potentially deep in the enemy territory can feel like a bargain.

Diplomacy grows on the edge of the blade

Ah, but there is little bargaining in the real game, certainly when playing against the AI. You can definitely trade with the others, up to exchanging captured agents. But the diplomatic game is weak, with treaties sapping both of your Authority pools (needed to capture villages) – and never granting peace that’s in any way enforced by game mechanics.

Unfortunately, the AI leader taunts are as repetitive and annoying as they ever are.

The also the skulldugery of the regular Landsraad votes. Three propositions are laid out, and all can vote for or against them (or for the benefit/punishment to befall a certain faction). And suddenly being hit by a 30% increase in Water upkeep can be as nasty as getting three free Landsraad Guard units is fun. With human players in multiplayer, Landsraad nonsense would be a hoot.

But that’s Dune, isn’t it? Everyone is out for themselves, there are plots within plots, and assassins lurk in every shadow. Arrakis is much too hostile for large armies to fight it out in the field, so small strike forces make their way over the sands, moving from village to village, fighting in brutal melee (shields don’t really appear in the game, but ranged unit can be effectively shut down by melee fighters), possibly with the support of some turncoats.

We are not the same

And of course, each faction is different, even if the unit rosters are roughly similar in types (if not abilities) and the building rosters are nearly identical. Atreides are the only ones in Dune: Spice Wars who can peacefully take over neutral villages – but they can’t pillage any for resources. Smugglers can create underworld bases in enemy towns, with upgrades that either generate passive income or make the towns more lucrative for take over or raiding. Fremen have the toughest basic infantry and suffer less supply drain, and they don’t have spice harvesters for the sandworms to eat.

The differences don’t end there, and even factions themselves can be tweaked before the game by selecting two (out of four) advisors, each with their own small-yet-significant change to the gameplay. And that is another welcome break from the 4X norm: sure, we don’t get Stellaris-like nation creation, but it’s a graceful approach that works.

The art style of the Dune: Spice Wars mostly works as well. It’s stylized and beautiful, even if it’s never really breathtaking. You’ll never get close enough to the fighting to really care about trooper models, but there’s beauty in the vistas of Arrakis. There’s also elegance in the stylish interface. The only real downside is that the Atreides are atypically green (Smugglers made off with the blue), and our fair Duke is rather bland.

The audio part is fine, even if the leaders are (not yet?) voiced and the unit barks could use some flavor and variety. The music and audio cues work real fine, and they have some welcome subtlety to them.

Dune: Spice Wars has just entered Early Access, so it’s an unfinished title… that actually feels fairly done. Which makes me wonder: what am I missing? Are there some meta balance issues I didn’t detect while playing? Are there functions planned that haven’t even made a mark on the interface? It’s hard to tell, but it will be an interesting thing to watch. One thing is certain, though: Shiro made a lot of DLCs for Northgard and Dune still has a faction or two not represented on the field. That’s something worth looking forward to.