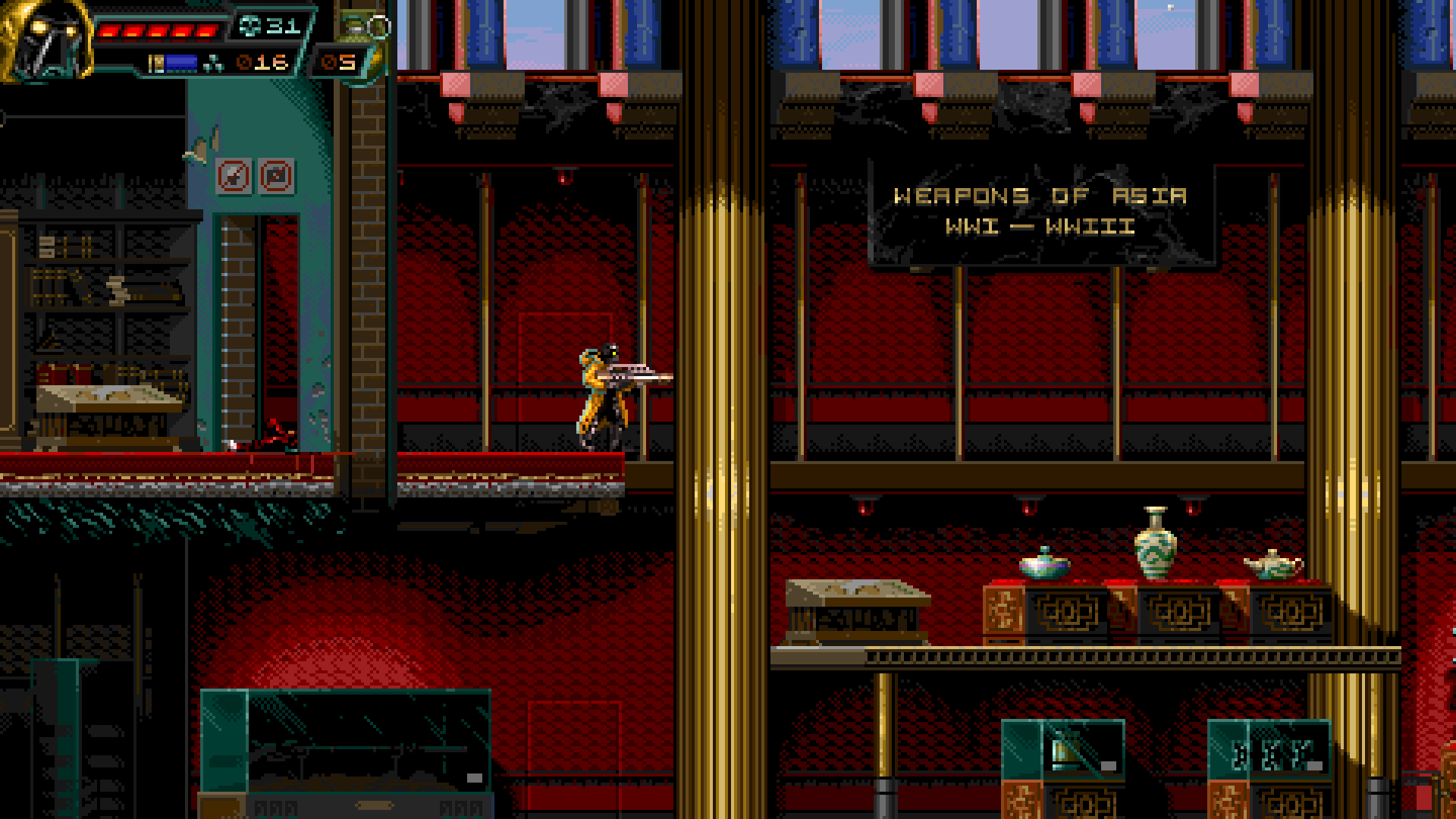 Growing up in Lithuania in late ’90s/early ’00s, I fed on a steady diet of action movies and thrillers. I also grew up to be an avid sci-fi nerd. And basically no game captures the nostalgic feeling of those years of gritty action violence like Huntdown.

The opening crawl – every good movie back then opened with one, and this one even features a crashed Hind – reveals a fallen world. Everyone is either a corporate citizen or a gang member. It’s a very Shadowrun-sans-elves existence. And just like in Shadowrun, the people who fit into neither of those groups become bounty hunters working for whoever pays the most.

In this case, Shimamoto corporation is paying up to two bounty hunters (you and your hotseat friend) – each of them embodies some action movie trope – to take out gangs plaguing one of their cities. You get to choose from Anna Conda (angry, female), John Sawyer (cyborg, 146 years-old) and Mow Man (android, they/them as lol genders in robots).

Who hunts the Huntdown?

In gameplay sense, they’re only differentiated by their armament. Each of them has a pistol and a thrown weapon. But for Anna Conda, that’s an autopistol firing in bursts and a tomahawk – powerful, but thrown in arc and of limited range. John Sawyer has, appropriately, a slow and powerful magnum with an entirely gratuitous scope. He throws boomerangs – not that powerful, but able to get the enemy on the way back.

I played as the Mow Man and he’s probably the easiest bounty hunter to use in Huntdown. Clad in a yellow raincoat like some unlucky Novo Sombran, he has a regular semiautomatic pistol. He also throws kunai right out of Naruto – and they fly and a straight line, making them the best/only thrown weapon able to whack gangers outside the screen. Using them makes Mow Man drop terrible edge puns.

Me and an army of branding-aware hoodlums

The gangs opposing you – from the punk Hoodlum Dolls to blacksploitation hood samurai in N#1 Suspects – have a much wilder and colorful arsenal. And a lot of it is gang-specific as well! Oh, some commonalities exist – there’s hard to innovate on the topic of “thug with a pistol.” But then stuff gets fun and you get hockey goalies with heavy weapons, greasers with jetpacks and samurai power armor. Another cool thing is that the special enemy types are not overused – in fact, a lot of them are entirely gang specific.

The good news for use is that gangers in Huntdown will sometimes (it’s entirely scripted) drop their weapons upon death. New guns can also be found in the wild. That’s how you can supplement your pistol with (ammo-limited) shotguns, assault rifles, grenade launchers, miniguns (ft. spin-up) and, if you’re really insane, melee weapons. You can also pick up a variety of alternative throwing weapons, like grenades, C4, and electric shuriken. And I dunno about thrown stuff, but you can always freely switch between the special weapon and pistol – you may desire to save ammo.

All these tools will allow you to blast your way throught a variety of painstakingly-crafted side-scrolling levels. They strike a great balance between gang/neighborhood and the associated boss aesthetics. There’s quite a bit of verticality involved – for jumping and exploration, thankfully, as you can’t shoot up or down. Huntdown also features a bit of light platforming – it never gets annoying, and while you may run into a rare death pit, you won’t ever have to worry about nonsense like spikes on the floors or walls.

The levels are decently interactive. For example, you can crouch behind any cover that exists in the movement plane – boxes, barrels, cars. But when there’s a niche in a background – a door frame, an open garage, and so on – you can also hide there. Sometimes, you can even blow up parts of the background to uncover medicine, guns, and gang staches.

But what happens if it was you who blew up? Well, you’ll respawn at the last checkpoint – minus any collected armaments. Not a big loss, but it can be annoying. Huntdown’s checkpoints exist as landing spots for a trauma-team like service, so seeing one coming is always a joy. It also helps that reaching a checkpoint refills your health.

Now, if you die in a boss fight, you’ll start again at the very beginning of it. At least you’ll retain any weapons you came with. It’s actually a bit of a tactic to grab some gun before the end of the level to have better odds with the boss. The game actually encourages it, as sometimes you’ll find gun blatantly placed before the boss arena entrance.

I’m not a fan of boss fights and I haven’t been in a long time. But Huntdown does it well! It even has side-scrolling’s only good helicopter boss fight! Each boss offers its own challenges and a specially built arena. It’s unlikely that you’ll see through all of their tricks in one go, but a few deaths in and you’ll know what to expect and when. And then, maybe you can finally clear a level without dying.

Sky the color of nostalgic television

What’s even better is that Huntdown is a beauty of a game. I love the placement of every pixel in its art. Our characters look cool, the projectiles look, the gang designs are great, and the level backgrounds are nothing short of amazing. Funny, nostalgic, featuring an reference or two, and always concentrated with pleasing detail – they’re amazing. This is art is so good, it makes me admit to some nostalgia – and I’m not a very nostalgic man.

The sound design is also good, featuring a susprising bounty of spoken lines, but I’m never that great about writing about audio. Just take my word that its good.

Huntdown is an amazing game, especially for its low price. Sure, it’s an Epic Game Store exclusive until 2021, but you shouldn’t wait. They world may not even be there in 2021, so if you are a real live person now and have a gamepad to facilitate some hot-seat multiplayer with a friend, get Huntdown now and get killing.